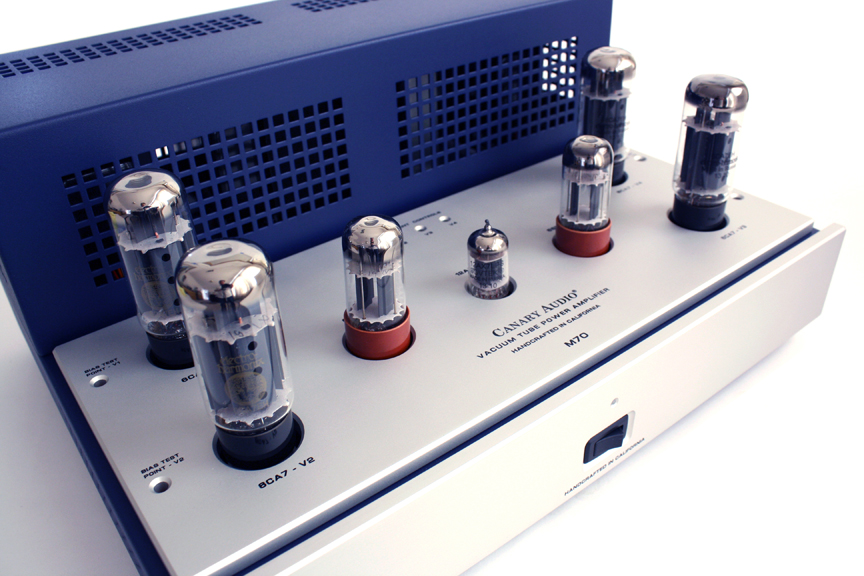 The historic American Canary Audio, which has already closed 50 years of life and continues unabated, honors this design with three models, such as the final Canary Audio M70 that we review here, but its passion is the direct heating triode 300B. Unlike the Europeans and the Japanese who have a special love for the single-ended topology, in Canary they prefer the 300B in push-pull and in fact their “bread” is four in the channel (two parallel pairs of push-pull) in monophonic chassis .

Of course, they also produce a SET with a 300B for 8W, but that’s up to that because the friends of SET did not want to “feel excluded from the company’s range”. As the damping rates published by Canary are higher than usual (12 for the M70 in the test, 3 for the SET M80), one assumes that they have used (in moderation) the negative feedback technique so that the low-power amplifiers find relatively easy speaker-partner and high power not to be afraid of “beasts”.

The M70 is the most affordable of Canary’s four stereo finals (six monoblock models complete the range of finals), with the M100 having twice the equipment of the EL34 and double the power, and here the designs end with the EL34 and there is a complete one.

Canary does not dwell on amplifiers but also produces DAC, CD player (with lamps) and a high quality power cable. It becomes clear that the company does not have “everything for everyone” but it is a very targeted range aimed at lovers of three-dimensional descriptions, which, however, never leaves them exposed in terms of power and driving skills.

As a company profile, therefore, based on its prices and the plans that follow, Canary seems to be the analogue of the Japanese Air Tight, although the latter has a wider range of lamps, such as KT88, 6L6 and 211, but also aims at enforcement force and precision as the necessary means to adequately deliver the tonal beauty of music.

The M70 is an imposing machine in appearance, with impressively good build quality. The design is of course very simple but it has this “something” that catches the eye, we would say a little more than a “military” Audio Research but also with less character than a Conrad Johnson.

The aluminum façade is interspersed with a small “bevel” peripherally and the same applies to the aluminum plate that covers the area under the lamps. The inscriptions are impressively shaped and the construction area -handcrafted in California- is inscribed in duplicate, front and top, with the classic American pride.

The finish of these two parts is excellent, as is the paint on the rest of the steel chassis, with the grilles having a perfect smoothness in the hand. The thicknesses of the metals are large, the aluminum measures 5 mm. and the robustness of the chassis is unquestionable. Everything is large and with comfortable distances between them in the M70, from the custom output transformers and the EI type power supply – and a small choke between them in the rear chamber – to the back plugs.

The same goes for the interior of the M70, which is implemented in an epoxy board of military specifications with exceptional precision and order and top quality materials, such as Dale resistors, Multicap coupling capacitors and electrolytic Nippon Chemicon, Samwha and Nichicon, all with 105˚C specifications.

There are four rectifier bridges with distinct diodes that support the supply of the individual operating voltages of the lamps and each section (7V, 90V, 310V, 340V) uses different electrolytic capacitors with generous voltage specifications (25V, 450V and 500V).

The board is placed upside down just below the lamps and the components are “hung” downwards, with the porcelain bases of the lamps being glued directly to the board. There is a output output after the transformer from the 8Ω winding that implements the feedback loop. The amplifier provides terminals for reading the polarization voltage of the power lamps in two pairs left and right and in front of the m / s chamber there are four holes to insert the screwdriver and set the value to 350mV DC.

The sensitivity of the final is high and the input resistance the same, so it is a good candidate for both passive and lamp preamplification. The M70 is equipped with an Electroharmonix 12AX7, two Tung Sol 6SN7s and the output lamps come from JJ, all modern production.

In a world valued only by numbers, the case of the M70 looks out of date. The few, very expensive watts produced by the Canary Audio final is not a ticket to worry, because you will have to find a speaker that is covered by the low damping factor and the 40W that it delivers.

For some of us, such quests are considered a waste of time – preferably a large transistor that is supposed to play in its path. For some others, the lamps are clearly ahead in terms of musicality and transparency and for them it is life goal to find a speaker that will meet their specifications.

We drove the US final with the well-known DAC / Project Pre Box S2 Digital preamplifier, which did not disappoint as it was an easy load itself, and then tested various speakers on both of its transformer outputs, with results varying from mediocre to excellent.

My personal opinion is that such final amplifiers, with a pair of power pens, are “Turkish delight” for highly sensitive speakers with more than one speaker, especially if they include large woofers, hoppers, etc. And how to limit them, dynamically and color-wise, if forces them to drive unconscious speakers with difficult resistances, even if they seem to do well from 4Ω, as this way they operate permanently close to their limit.

These are generally true, but variations are often unexpected and do not always follow the numbers. For example, the small and unconscious ATC SCM11 that delivers very well balanced with the 40-horsepower Pioneer A40AE, “rolled down” with the Canary which has the same power but much, much lower damping factor.

You could not stand the result for more than a few minutes, it was empty and dry. In the meantime, we tried a 4-speaker speaker with a sensitivity close to 90dB that we are testing this time and again we were disappointed, this time not from the driving or the levels that were OK but from the distant scene and the reduced detail due to perhaps too much sweetness which prevailed.

He is certainly a very selective and revealing amplifier and this is a good sign for his performance, but he had to see the new Spendor A7 in his barns to raise the curtain of his performance. The British are admirable with such speakers, which look unconscious on paper but set up amazing scenes and sound colors with good bulbs and a few watts.

So here too, this speaker tied perfectly with the amplifier, delivering a huge scene, excellent focus, beautiful tones with remarkable timbre density and endless detail and texture, in the context of a highly holographic display. Spendor balanced the brightness of the final high in the spectrum and took advantage of its large bodies, lowering a massive, detailed and round low that spreads beautifully and “brakes” smoothly.

It seemed that the M70 has a genuine lamp color in the wider middle area and the characteristic huge soundstage, but it has many solid state virtues reminiscent in many places of a hybrid lamp-bipolar. It has exciting speed, attack, sharpness and depth of field, all at marginally good levels for a lamp and raises levels very steadily and smoothly. At the same time, I had no sense of urgency and dryness from the feedback, which must be quite low and tastefully designed.

Canary Audio finally exudes something authentic, the great American soul if you will, as I have felt it from the famous CAT JL2 Signature MkII, the loudest powerful lamp final we have ever heard from the USA. And this is the essence of the M70, that it has managed to highlight the three-tone color of the EL34 despite the ultralinear connection, finally combining power and finesse to a limited degree.

So the price may make it inaccessible and, in addition, force us to find a speaker to measure, but the “ceiling” of performance is very high and, when the match is achieved, there is nothing artificial left between the listener and the music.