Tube amplification technology somehow imperceptibly, without loud reports, but has evolved in the most decisive way, and now a number of companies offer devices that can compete with semiconductor competitors in precisely such aspects of sound quality where they are especially strong.

The human race has a concept, rather, a legend about the “golden era”, the memory of which among different peoples lives for centuries. Lovers of high-quality sound also have it, and they attribute this wonderful period to the late 50s – early 60s of the last century, before the introduction of semiconductor amplifiers into audio paths, which “ruined everything”. The question is, why did they manage to become so ubiquitous? They refer to the aggressive market policy of Japanese manufacturers of audio equipment, but in fact, the reason, apparently, is the comfort of use and other advantageous consumer properties of semiconductor Hi-Fi equipment. Do not discount the higher power of such amplifiers, orders of magnitude lower level of nonlinear distortion and superiority in many other characteristics that determine the sound quality. Among the assets of lamp competitors,

Moreover, interest in it – along with vinyl players – has recently increased among even wider circles of music lovers, so that developers and manufacturers of tube amplifiers have an incentive to improve them, since the decades that have passed since the “golden era” are far ahead material science and production technologies have stepped forward – progress, in a word. And now we see that their work has been crowned with visible success: there are many models on the Hi-Fi market that can compete with transistor counterparts in power, balance and organization. One of them is the Cayin CS-100A (EL34) . This is a class AB integrated amplifier, equipped with one 6SN7 tube for voltage amplification, two 12AU7EH tubes for phase inversion and voltage amplification, a 12BH7EH pair in the driver section, and eight EL34 pentodes in the output stage. The latter can be replaced by KT-88 beam tetrodes; in this case, set the switch on the rear panel to the proper position. The CS-100A (EL34) can operate in ultra-linear mode and deliver 80 watts per channel or triode, providing 2×50 watts.

The amplifier has three linear RCA inputs, as well as the ability to feed a signal directly to the power amplification stage – to the Pre-In input, which is very promising due to the prevalence of network players with their own volume control. To connect a subwoofer, it is suggested to use the RCA output from the preamplifier.

The equipment of the amplifier is complemented by the “soft start” function, which reduces the destructive effect of high inrush currents on lamps and other components, which prolongs the time of its trouble-free operation. There is also a system for adjusting the bias currents of the output lamps: on the front panel on the left are the Bias selector toggle switches, and on the top panel there are adjusting screws and a dial indicator.

The quality of the implementation of the electronic circuit is the highest: a hinged mounting with the use of silver conductors was used, audiophile-class capacitors, resistors made of carbon film are installed in the circuits; the volume is adjusted by means of the ALPS potentiometer. Traditionally, for tube amplifiers, it is possible to connect to four- and eight-ohm acoustics.

Sound worth the effort

Above, we have already given a very high rating to the Cayin CS-100A (EL34) amplifier. In no case, without taking our words back, we will nevertheless make some explanations.

From the very beginning of testing, the amplifier was able to demonstrate such properties as high detail, clarity and smoothness of sound. It creates a three-dimensional, well-organized stage with a clear arrangement of instruments in the most complex and multifaceted compositions, such as symphonies. It is this skill that is often lacking (or lacking in the past) in tube amplifiers.

Unlike the previously tested Cayin models, the CS-100A (EL34) performed better in the ultra-linear mode – in it the sound is more natural, rich, solid than in the triode mode, in which fullness and liveliness are somewhat lost. The detail in both versions is very high.

It also turned out to be picky about the mains power supply: connecting through an ISOL-8 MiniSub Axis network conditioner gave an additional gain in elaboration, scene volume and focusing without loss in dynamics. Connecting Revel F-52 floor-standing speakers to a four-ohm output contributed to a deepening of the low-frequency range and an increase in the scale and weight of the sound compared to what was observed with an eight-ohm one. However, it still remained somewhat lightweight, lacking a solid bass base. At the same time, it cannot be called bright – only a little light, perhaps. It is clear that to equalize the tonal balance, speakers with an emphasis on the low end are needed, and a source with a similar character will not hurt.

In our system, it turned out to be easy to simulate such a situation: for the Revel F-52 speaker, you can lower the RF level using a toggle switch on the rear panel, and the RME ADI-2 DAC FS DAC , which, together with a mini PC with a Roon software player, acted as a source, allows you to raise the bass using the built-in equalizer. One decibel in both cases was enough for the sound of the audio section with the Cayin CS-100A (EL34) in its core to reach the desired perfection.

In general, it does not have those features for which some people love tube sound, while others do not. In particular, there is no protrusion of some properties to the detriment of others, from which their genre preferences are formed. This amplifier delivers music accurately and faithfully, while maintaining the subtlety of the lines, their smoothness, as well as the characteristic roundness of each note.

Album Recomposed by Max Richter. Vivaldi. The Four Seasons plays just fine: large-scale, detailed to the finest nuances, fast, energetic. I would like to note the fine workmanship of the voices of the instruments: the solo violin is full of life and extremely emotional – sometimes capricious and harsh, sometimes sad and tender, sometimes enthusiastic and expressive – but always harmonious, saturated with overtones and very pleasant to the ear; the rest of the strings organically and elaborately frame her parts; the harpsichord is unusually detailed and attracts attention with its unusual timbre.

In the air-filled space of the stage, many subtle high-frequency sounds are found, generated, as well as the deep, pulsating bass line, by electronic musical means. They are layered, intertwined, swirl and sparkle – very beautiful.

The CS-100A does not give in to even larger-scale compositions, for example, the Sixth Symphony by P. I. Tchaikovsky performed by the orchestra conducted by V. Gergiev. We note here a clearly organized scene with clearly represented groups of instruments, a huge scale of dynamics, sharpness of attack with explosive changes in volume, excellent microdynamics. No confusion, and only naturalness and smoothness of delivery, as well as special roundness of sounds speak about tube amplification technology.

Listening to arias from operas from A. Netrebko’s album Verismo gives a lot of pleasure. The singer’s vocals are reproduced in all their fullness and brilliance, it is superbly articulated, expressive, diverse and rich, and her image is focused with a distinct effect of presence. The loudest and highest in tone coloratura do not cause the slightest difficulty in the amplifier.

Another classic, Deep Purple’s Highway Star , is served no less exciting: fast, rhythmic, detailed and authentic. Muse’s more modern rock compositions are also quite impressive: the rhythmically disturbing Uprising , and The Globalist with its transition from a sad ballad to an aggressive fortissimo, and similar to the church chant of Drones .

Probably, it is not worth mentioning how good various jazz things are in the performance of the CS-100A – all tube amplifiers know a lot about them, and this one is no exception. 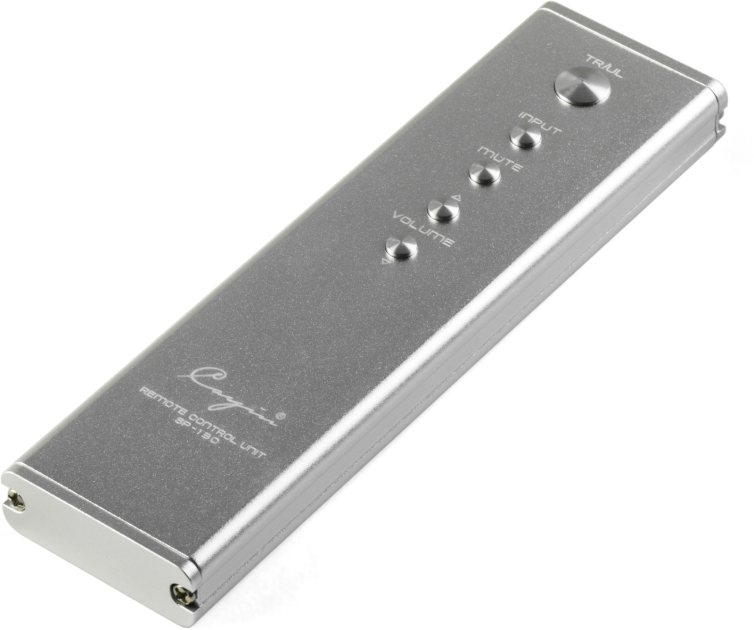 The laconic metal bar remote control is elegant and convenient

The modern tube integrated Cayin CS-100A (EL34) combines such advantages of semiconductor amplifiers, such as the absence of coloring, the clarity of the formation of the music scene, the accuracy of content delivery and a sufficiently high output power with a special sound signature characterized by smoothness, naturalness, and airiness. With the correct selection of system components, it will provide tonally balanced and faithful playback of songs of a wide variety of genres.