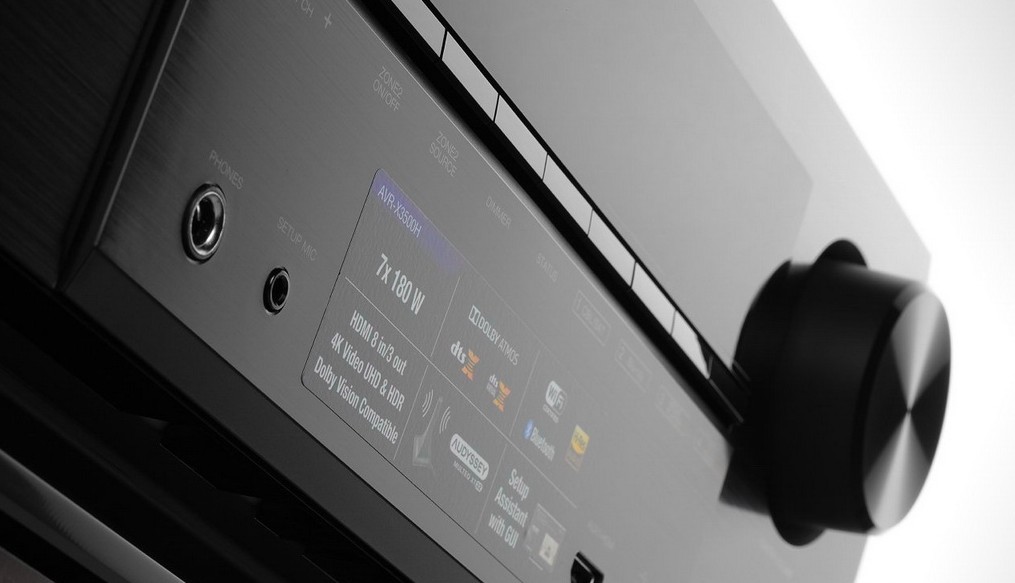 Denon AVR-X3500H is an AV receiver equipped with seven power amplifiers and a full range of advanced features. The device has a laconic and quite recognizable design with a symmetrical arrangement of controls on the front panel and a large fluorescent display. The Denon AVR-X3500H can serve as the foundation for a high-end home theater system, it is designed to handle a wide variety of signal sources and is easy to set up and use.

The Denon AVR-X3500H is equipped with Dolby Atmos and DTS: X new object-oriented surround sound decoders, which have long been a must for AV receivers. In addition, the device is equipped with eight HDMI inputs and three outputs with support for 4K Ultra HD video, and among the connectivity options, we can note the presence of a 7.2 output for external power amplifiers. The AV receiver is capable of converting video from any source up to 4K resolution, supports all new Ultra HD technologies. One of the features of HDMI switching in the Denon AVR-X3400H is the audio return channel, which allows you to turn the connected TV into a full-fledged audio source. The AV receiver’s seven channels can be configured to work in a surround sound system, or if only five channels are used in a DC.

For the convenience of adjusting the sound of the Denon AVR-X3500H depending on the parameters of the room and the connected speakers, the Audyssey MultEQ XT32 system is provided. For precise control of it, a special Editor App was developed, with the help of which all settings are made as clearly as possible. Sound processing is carried out by a 4-core DSP processor, the power of which allows you to get accurate reproduction in any format.

A full set of network and streaming functions in the receiver is supported by dual-band Wi-Fi, Bluetooth and AirPlay, HEOS multi-room, and the proprietary AVR Remote app provides convenient control of not only the AV receiver, but also the BD player. Over the network, the Denon AVR-X3500H is capable of reproducing High Resolution audio with parameters up to 24-bit / 192 kHz and DSD 2.8 / 5.6 MHz.

If you set a goal to find a mid-priced AV receiver with the richest equipment, advanced decoder and powerful amplifiers, then this new product will definitely become the main favorite. And just now the “multitasking” of this device will be very useful – we will test it in a system composed of unusual but very advanced acoustic systems.

A fact that you cannot argue with: the more complex the audio / video system, the more noticeable the sound quality depends on the accuracy of the system adjustments. The class of equipment used, which is critically important in High End Audio, certainly does not recede into secondary roles, but ceases to serve as a guarantee of the perfection of the complex as a whole. Therefore, experienced installers, when developing serious projects, try to deal with equipment that provides the most flexible installation possibilities. Perfectionism in the selection of components is justified only when it is possible to achieve perfect consistency of all components of the system.

The aforesaid has become relevant today even for ordinary home theaters built on the basis of AV-receivers at the average price. With the advent of object-oriented format decoders and advanced software, the switching and tuning functions in this technique have stepped forward. But something that will delight every enthusiast who understands equipment, interfaces, standards and sound modes creates many problems for the ordinary buyer.

Denon was one of the first to notice this and offered interesting solutions. The main innovation of almost all receivers of the 2018/19 model year is the support for Internet management, which allows specialists, using the SRM (Smart Remote Management) service from Domotz or Ihiji, to remotely diagnose the system settings of the end user. Such a control tool is sure to be a good addition to the basic Audyssey Expansion Mic Auto Calibration, which greatly simplifies the sound optimization process. But that’s not all. Added a function for detecting errors in HDMI connections, extended alerts in case of protection activation and deeper settings for the bass manager, thanks to which a much higher quality playback becomes available in the most problematic band.

By the way, here is a suitable example of the above – the flagship of the seven-channel family of AVR-X3500H receivers. Even a cursory acquaintance with the functionality makes it clear that before us is a kind of “Swiss knife” for home theater. You can hardly find a competitor in its price class offering more features. And we will not even try to describe everything – we will focus only on the key differences. In comparison with its predecessor, the new device looks more laconic. The design from the “face” is stricter, although in terms of the rear panel and the given passport data it is in many respects identical to the AVR-X3400H. It also uses advanced volume control ICs, five analog RCA pairs and two Coax jacks, which, together with 7.2 multichannel output, differentiates this model from the more affordable seven-channel AVR-X2500H.

For those who are going to build a full-featured multi-room system based on the 3500, we would like to inform you that this receiver has a HEOS wireless interface and a “classic” RS232 port, trigger, control bus I / O, as well as a third HDMI output to the second zone and a built-in video converter. converting a signal from analog composite or component video inputs into a digital stream 4K 50/60 Hz.

And for those who are more interested in the “musical” component, it will be useful to know that high-class AK4458VN are used as the main DACs in the AVR-X3500H, a shielded 600-watt transformer is installed in the power system, and complementary pairs Sanken 2SD2560 / 2SB1647 are used in the final stages – bipolar transistors of new generation with extended bandwidth and output currents increased by one and a half times.

Thorens TD 148A Review: Meets all requirements for a high-end turntable