Celebrating 110 years of superior sound quality, Denon is proud to present a limited edition of the anniversary units including the DCD-A110 SACD player, the pinnacle of Denon’s hi-fi lineup. Building on 110 years of audio experience, Denon has created a new flagship premium SACD player based on patented Advanced SVH technology. The latest D / A converter, advanced Ultra AL32 signal processing and heavy aluminum chassis deliver sound that will surpass all your expectations. Denon DCD-A110 is offered in a unique graphite color. The disc drive design uses the proprietary Advanced SVH technology, which, due to the use of a powerful cast chassis and damping inserts made of various materials, is completely devoid of internal resonances and internal vibration caused by the rotation of the disc. The mechanism’s low center of gravity also suppresses any vibration generated within the mechanism due to the rotation of the disc. The turntable is also designed to resist external vibration by taking measures such as lowering the center of gravity and placing the power transformer near the feet. Eliminating unwanted vibration minimizes errors when reading information from a disc, increasing the clarity and accuracy of sound reproduction.

The design matches its series companion, the Denon PMA-A110 amplifier . There is a display in the center of the aluminum facade, above which is a CD-drive tray. On the right side of the front panel there are playback control buttons and a tray opening button. On the left is the power / standby key with LED, Disc Layer (for selecting the SACD layer in a hybrid disc) and Pure Direct (disables the display / digital outputs), as well as LED indicators to indicate Advanced AL32 mode is activated and SACD is playing … There is an RCA output, as well as optical, coaxial outputs and a pair of IR ports.

Four digital-to-analog converters on BurrBrown PCM1795 ICs, operating in parallel, bring a completely different level of sound reproduction with the highest fidelity, great stage and the best signal-to-noise ratio. The Denon DCD-A110 SACD player does not use a traditional op-amp as a post-filter. The turntable features a fully discrete filter stage with carefully selected and individually tuned components selected by Denon engineers to achieve outstanding sonic performance as well as a wide and deep soundstage.

To eliminate mutual interference and noise from the operation of the digital units of the player, the power supplies for the digital and analogue circuits are completely separate and independent. The Denon DCD-A110’s power supply features a fully discrete design that is optimized for sound. The power circuit uses Denon’s proprietary 3300uF custom capacitors. The Denon DCD-A110 also boasts custom parts such as a fully discrete volume control circuitry, high quality electrolytic and polyphenylene sulfide capacitors. These parts have been developed in collaboration with leading manufacturers in a multi-listen mode. These parts provide a clean, reliable and stable power supply, resulting in clear and perfectly balanced sound.

We admit : none of us expected radical advances in the next anniversary components, which even in a special design resembled well-known models. However, already at the warm-up session, the duo, made up of new Denon Hi-Fi devices, showed that the Japanese brand – sorry for the spoiler – had never had such a sound. Of course, 110 years is a respectable age for any audio brand. But such numbers in themselves, you see, do not oblige you to anything – just another milestone. With this in mind, we took on the opening of the boxes of new Denon components without much expectation. And completely in vain! As it turned out, the amplifier and turntable made by the company “for the holiday” have so many fundamental differences from the components of the 2500 series that are close to them in design, that the new items should be presented not as a special version, but as a completely new line. We will not discuss the presence of additional gift containers, certificates of authenticity and a special anniversary logo on the front panels of the devices – this is an obligatory part of the festive atmosphere. But still, we note the special gray coating of the metal panels. It looks strict and at the same time very elegant. By the way, in the internal documentation, the finish is called “gun steel”, but on the British Denon website it is signed as “silver graphite” and this definition is more accurate – under certain lighting, the components really shine, as if covered with silver. Now – to the point. Let’s start with the DCD-A110. This is a pure CD and SACD player / transport – no DAC functionality, no inputs, no wireless or network connections. From  Denon DCD-2500NE the new device got only a display matrix and a first-class mechanism (by the way, this is an original Denon’s own drive). The chassis is new – increased in depth by 67 mm. The entire internal layout has been revised – both at the physical and logical levels. In particular, the signal removed from the carrier is reclocked with a double master clock at two points. At the input to the digital receiver, preliminary cleaning of coarse “mechanical” jitter works (the phase jitter that occurs during the readout process is removed), and then the same work is repeated, but only in a much more strict and accurate form, in the processor itself – to eliminate even insignificant out-of-sync in data transmission lines between chips. Now we add a new power system made on two transformers and increased in power five times. This means that the main internal consumers now receive energy with a significant reserve, and any fluctuations in operating currents have practically no effect on stabilization along the most sensitive circuits. Such unprecedented nutritional modernization measures are not accidental. Without them, the absolutely new proprietary Ultra AL32 filter / converter used in the player simply would not have shown an expansion of the dynamic range and an improvement in the signal-to-noise ratio by 6 – 9 dB at once relative to the previous generation system. The “ultra” itself is interesting in that any incoming PCM signal is first resampled to a frequency of 1411.2 or 1536 kHz (which corresponds to 32 times multiplication of samples relative to the standard 44.1 or 48 kHz). For this, a separate Intel Cyclone 10 FPGA processor performs a rather complex interpolation using two different data calculation algorithms at once (by the way, if the input stream is a one-bit DSD, then it is practically not subject to computational processing). Then, dividing the clocks in two, the processor transmits the data in 32-bit form for parallel conversion to four two-channel Burr-Brown PCM 1795 DACs. In each stereo channel, the converters are combined not only into classical differential pairs, but are kind of “mirror” to each other in timing, which and allows them to render the waveform even more accurately. This is followed by a traditional discrete current / voltage converter stage. All parts of the new circuit, including the power supply regulators, are placed on a balanced PCB. The selection of elements, according to the manufacturer, is the strictest. Custom capacitors, similar to those found in the top-end DCD-SX1 turntable (limited edition for the Japanese market). The resistances in the supply circuits are MELF, in the path – expensive carbon AMRS … The PMA-A110 amplifier is notable for exactly the same ultra-converter, but here it is supplemented with an XMOS interface for receiving a signal in asynchronous form via the USB jack (by the way, the DAC is completely decoupled from the main “ground” of the amplifier). The path also includes a new phono stage with a passive RIAA correction circuit, the mode of which (MM / MC) is switched directly from the front panel. The Analog Mode is even more uncompromising. Now not only the entire digital filling of the amplifier is turned off, but the entire power system for it is also completely de-energized. The amplifier itself has also been redesigned. It now has the shortest “two-stage” concept – there is an output push-pull circuit based on high-current field-effect transistors UHC-MOS (similar to those used in the PMA-SX11), and is preceded by a special stage with variable sensitivity, the gain of which varies in the range of 0 – 16.5 dB … This scheme allowed the 160-watt power supply to be rebuilt for a lower gain (29 dB instead of 45.5 dB for the  Denon PMA-2500NE amplifier ), which significantly reduced the noise level at the acoustics outputs. At the same time, the developers abandoned the potentiometer for changing the volume in the circuit, retaining the familiar handle with an electromechanical drive. In addition, the PMA-A110 also features tone and balance controls, although outwardly everything looks as if you are turning ordinary variables. We can also refer to innovations as special “cans” in the power buffer – their nominal value is not very impressive (12000 uF / 71V), but an improved paper separator is used in the plates. The class of other parts used – from RCA connectors and heavy-duty screw clamps for speaker cables to selected capacitors / resistors – leaves no doubt that Denon has produced an amplifier identical in quality to the flagship SX1. 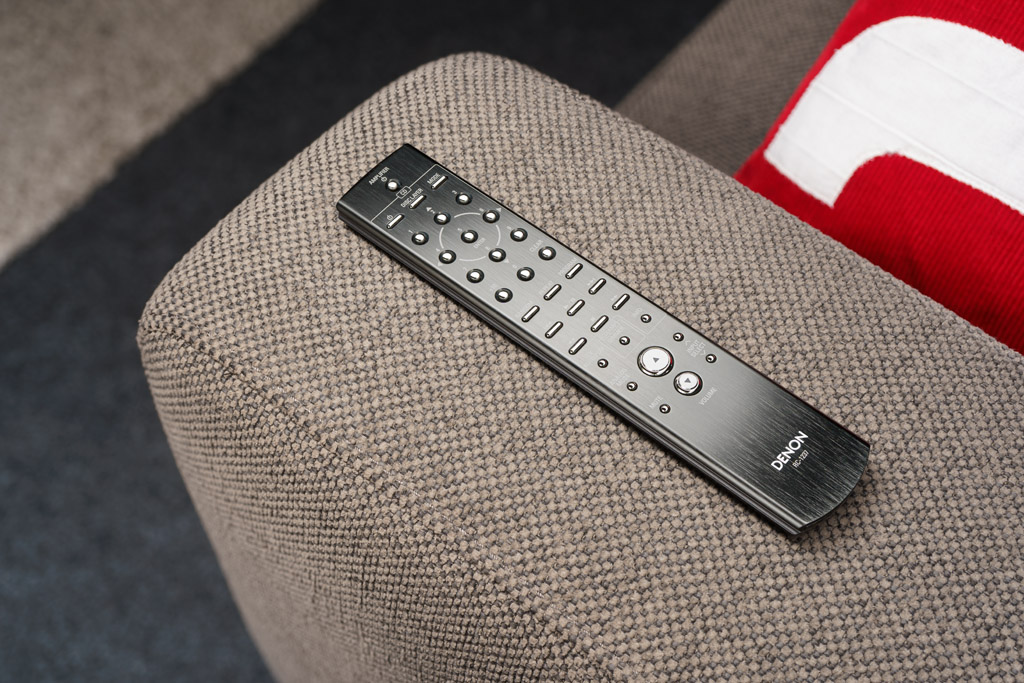 You can speculate about what contributed the most to such a high quality – an advanced anti-jitter system and a new ultra-processor in the player itself, or a short IC architecture running in honest Analog Mode. In any case, both devices deserve the “Expert’s Choice” award, if only for the fact that we have finally found in them the very proprietary perfectionism that was previously found only in the most expensive Denon products for the domestic market. And if because of this “one hundred or tens” will become a rarity on the market tomorrow, we will not be surprised at all.

Luxman D-380 Review: Reference CD player you should have