Denon is definitely one of the brands with a very solid vinyl heritage. Moreover, the glory of one of the world’s leading manufacturers of turntables was brought not by mass models and not by some single mega-constructions for the elite, but by the “golden mean” – advanced direct-drive vinyl players from the upper segment of Hi-Fi and initial High End Audio, which are sold in such large quantities, as Denon did at one time, hardly anyone succeeded. To verify this, just go to eBay and enter two words in the search field: Denon turntable.

The world Internet flea market will immediately give out thousands (!) Of offers. At the same time, you are unlikely to see affordable options even among dilapidated used ones. Even after 20 – 40 years, its equipment is highly valued, which speaks not only of the class, Today’s explosive growth of interest in records gives a chance to unwind old and forgotten analog brands in a new way. And companies like Denon, whose names have remained on the floor all these years, should refill their model lines with turntables, tonearms, cartridges and all the related accessories.

That, it would seem, does not constitute a problem at all – get the drawings from the archives, buy the necessary radio components, start the machines … Today, the turntable market is so hot that even a remake based on legendary models will be bought willingly. Therefore, we are seeing a lot of reincarnations of time-tested constructions. By the way, at home, Denon did just that, offering Japanese audiophiles both brand new “old” DP-500 and DP-1300 in the second reissue.

But when you look at the DP-400 and delve into the technical nuances, you gradually begin to understand that this model, despite its simplicity, is not just another product made with an eye on the already released ones, but the result of rethinking the whole concept of low-budget players. 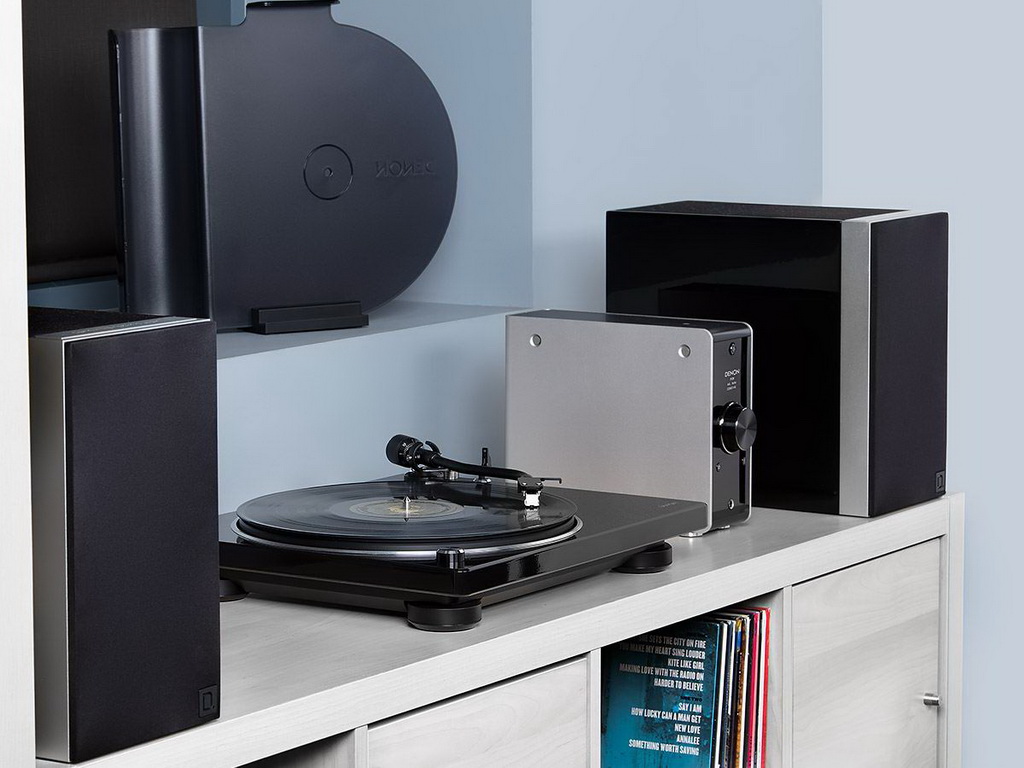 The head, for example, is the same as in the DP-300 – a high-quality, inexpensive DSN-85 with moving magnets (other sources indicate CN-6518, but this is just a different marking of the same product, which is done under an OEM order for Audio -Technica). But the tonearm is different – S-shaped, as on the models of the higher class (length 220 mm, the pressure is adjustable from 0 to 4 g, fits cartridges weighing from 5 to 13 grams and 16 mm high).

From the additional settings there is an anti-skating setting, from the basic functions – an auto-stop with a needle rise, as well as a built-in phono stage. The drive is carried out as in the model of a class below – a belt from a DC motor, which can rotate the main aluminum disk at three speeds. Everything seems to be painfully familiar.

But at the same time, the device has changed its thin weighty base, and supports, and the general design. Instead of the usual lifting cap made of plexiglass, there is a profiled cover made of black acrylic, which protects the switched off “table” from dust, and when removed it turns into a “showcase” for the cover of the record. The main thing is this: every detail is made with such high quality, and all the mechanics work so smoothly and precisely that the “four hundred” is perceived as an expensive thing made using the latest technologies. Nothing in common with either primitive fiberboard “tables”, or entry-class plastic “rattles”, or designer models. As a result – and serious characteristics.

I didn’t have to go through a lot of calibrations and check if the tonearm really gives the pressure indicated by the serifs on the counterweight – everything is exactly like in a pharmacy at Denon. We simply balance the arm with a balance bar, mark zero, and then turn the counterweight to the “2” mark and set the same amount on the anti-skating wheel – we get the optimal sound result. You can check. A slight increase in downforce will add a little dynamics and detail to the treble, but will make the bass contour. Decrease will manifest higher components and infra-low components, but the images will slightly weaken in corporeality. So put exactly two – this setting is the most linear and accurate in terms of focusing virtual sources. You may only need to adjust the anti-skating individually for your copy of the cartridge. On a test player, for example

Since the Denon DP-400 is unlikely to be used with an external advanced RIAA corrector, I limited myself to listening to a player with two integrated amplifiers of different class, having a Phono MM input, comparing the sound with what the circuitry built into the player gives. And at the end I also compared the best of the received variants on absolutely the same musical material with SACD. So, let’s start with the most affordable bundle: DP-400 + PMA-800. Good dynamics, clear detailing, a minimum of coloring overtones and almost complete absence of noise or network background. The bass is collected, but a little lightweight. The lowest components sound enveloping – they lack realism a little. To the top lane, if you approach it strictly, you can also find fault – there is a slight aggression. But the middle is beyond praise. Clear, lively, passionately …

If you switch to the linear inputs of the amplifier, and turn on the internal equalizer in the player, then the nature of the playback subtly changes. The pattern on the HF softens, a little boom in the lower middle is added, and at the same time barely noticeable mechanical noises of the drive are already heard in the silent tracks. But I would not say that this option is less interesting – the reproduction has not lost in detail, and even increased in the integrity and physicality of virtual sources, which makes the entire space of the stage seem more lively. With the more expensive PMA-1600NE, the sound is better balanced in tonal aspect and richer in detail, but there is less dynamics and mesmerizing analog head. It seems that the corrector of this amplifier is noticeably superior in class to the turntable – it works so much more accurately and more accurately that, together with musical information, it reveals the disadvantages of an inexpensive pickup. But the latter still has nothing to blame. For conventional tapered heads, it is simply unusually neutral and natural at high frequencies and is superior to many elliptical or even more complex needles in this regard.

But with its own equalizer and through the PMA-1600NE’s line inputs, the turntable sounds even better! The treble level is slightly lower, but the color of sonorous instruments is revealed much more fully – all cymbals in different recordings have an individual timbre, whistling and hissing among the vocalists also differ impeccably. The corrector built into the player, I think, is much simpler in circuitry, but it is perfectly matched to the head, serves as an ideal load for it, and this is what gives the path such a fine musical resolution in high, and at the same time in the middle register. Some kind of playful thread appeared in the reproduction, an immediacy that makes you believe in a live sound. The bass register was also revealed in a new way. It is this option that I decided to compare with SACD. Of course, digital media on an expensive turntable sounded cleaner, more detailed, and more airy. He also showed that the rolloff at high frequencies in a purely analogue path is not just barely indicated, as it seemed to me at first, but reaches at least a couple of decibels. But it is easier to track down the nuances and intonations of the performance rather than the individual sounds on vinyl. SACD’s sound is close to ideal, but the whole canvas is perceived as a puzzle – each image seems to live in it as if by itself. And when you switch the input selector to vinyl, everything becomes the other way around – you lose airiness, purity, the dynamics are slightly compressed, but all that we call “apparent sources” suddenly turns into absolutely intelligible images. And it is precisely this kind of reproduction that instantly captures. By the way, the NF-2404 air-insulated audiophile interconnect, which I turned on after the main tests, just for the sake of interest, into the vinyl path instead of the NF-102, worked literally a miracle – it collected all the insignificant details and very organically woven them into the musical canvas, which made the sound at least as informative as with SACD, without losing either integrity or emotion. Of course, this can hardly be called an acceptable option (the price of a bundle has become comparable to the cost of a reference digital source), but the experience itself is indicative – even for an inexpensive turntable, it definitely makes sense to look for a high-quality cable.