The Denon DRA-100 Stereo Network Receiver offers versatile connectivity and allows you to listen to Internet radio and streaming audio over a wired or wireless connection. The device provides uninterrupted music playback and supports HD Audio up to 192 kHz / 24 bit. The Denon DRA-100 is the best in its class for playing new digital media formats. DLNA 1.5 support allows the Denon DRA-100 to “communicate” with networked devices and provides the ability to listen to and listen to streaming audio from a computer, network drives or the Internet. Online services such as vTuner are also supported. Thanks to the digital input, the system can be expanded – for example, by connecting a TV or set-top box. The system is completed with a convenient remote control,

The Denon DRA-100 supports state-of-the-art networking functionality, and can play music files from available network devices in all popular formats, including PCM HD 24-bit / 192 kHz (FLAC, WAV, AIFF) and DSD 5.6 MHz. Connection to the network is possible both via cable and Wi-Fi, in addition, the receiver supports AirPlay and Bluetooth (with NFC) technologies. For digital signal processing, the Denon DRA-100 uses a proprietary DSP AL32, which converts the original audio data up to 32 bits. Also, the device uses an improved master oscillator, which significantly reduced the level of jitter. Music files can also be played from portable media that connect to the front USB connector. IPod / iPhone can be connected to the same port.

The receiver uses a combined audio circuit based on the patented DDFA technology. Its output amplification stages are built on discrete elements, due to which a higher signal-to-noise ratio and less distortion are achieved than in traditional D-class amplifiers. The device develops power up to 70 W per channel, and is able to work effectively not only with bookshelf, but also with small floor-standing speakers. And if you need to increase the bass response, you can connect an active subwoofer to the Denon DRA-100. The receiver has inputs for two analog and three digital signal sources, a stereo output that can operate in fixed or adjustable signal levels, and for connecting headphones it uses a special circuit that provides high sound quality.

The Denon DRA-100 network stereo receiver looks modern, rather expensive, elegant, moderately strict, and at the same time does not cause rejection among adherents of high-quality classics. At first, the volume control knob seems a little frivolous, but when you grab it with your fingers, you understand – everything is in order, it’s metal. Another “hard” button – power, all other organs are touch-sensitive, appear on the front panel after turning on the device, like the OLED display. The 6.3mm headphone jack is located on the left, on the same side as the wire on most headphones. Above it is a USB connector for flash drives, for connecting Apple portable equipment and recharging mobile devices. The patch panel evokes associations with the Denon CEOL N9 model: the same acoustic terminals, a pair of WPA buttons (for a router and for Apple equipment), two Toslink inputs, a subwoofer output. But there are also differences: the DRA-100 has added a linear analog output and one more analog input, it does not have an antenna jack for a tuner, but two external antennas appeared – for Bluetooth and Wi-Fi, which should, in theory, improve the quality of communication (CEOL had internal antennas).

At first I was disappointed by the lack of a USB type B connector and a USB-DAC function, but then it dawned on me that a device with network streaming capabilities did not need them: why connect with a cord, say, to a laptop, if all files located on it can be played over the network and not the worst quality?

There is not much information about the Denon DRA-100 internals. It is known that his power amplifier works in class D, it is built using DDFA technology on the CSRA6601 / CSRA6600 chipset from CSR, the same company that now owns the rights to the aptX codec. The output stages of the power supply are discrete, which reduced distortion and noise. A separate amplifier works for the headphone output, but the level on it is changed by a general regulator. But in the settings menu there is a three-position switch that allows you to adjust the volume in the headphones. According to the documentation, it should be chosen based on the load impedance: for low-impedance models – low level, for high-impedance models – high. Well, the middle position is for models with medium impedance (or medium sensitivity). It is also possible to change the line-out mode, i.e. make it fixed or adjustable. If you decide to upgrade your system by adding an external power amplifier, this switch will come in handy.

The DAC is said to use proprietary Advanced AL32 technology in conjunction with its own reference oscillator design. The chip is capable of accepting PCM input streams up to 192 kHz / 24 bit. The specification also declares the ability to play DSD 2.8 / 5.6 MHz (dsf / dff) files over the network and from USB-media, however, it is not known whether it is about “direct” decoding or about preliminary conversion to PCM (on it doesn’t really have any practical meaning – some people think it’s best to convert first). 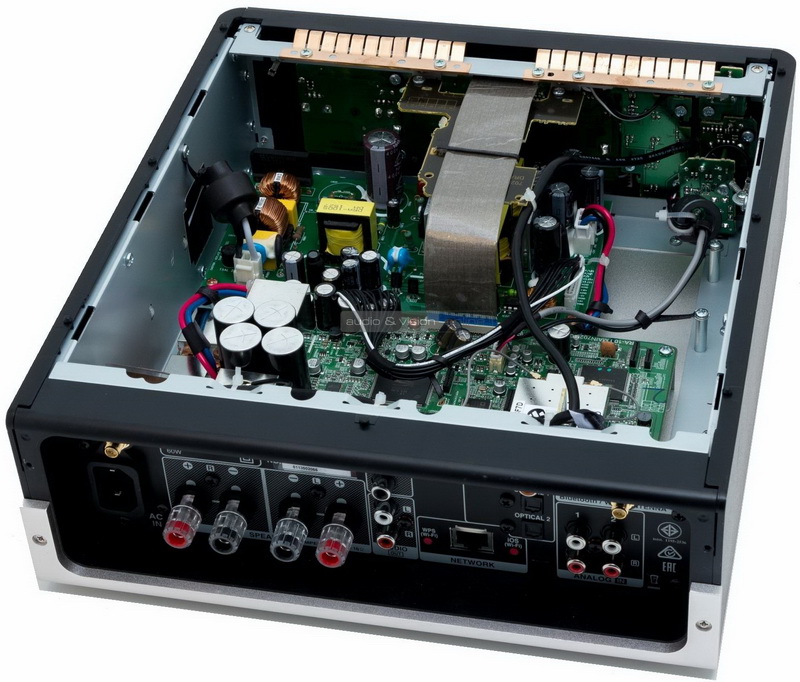 The device can be controlled in two hands: using a standard remote control (and not some kind of card, but a full-fledged one) and / or a free mobile application Denon Hi-Fi Remote – the same one that controls the CEOL family systems and some other network devices Denon. There are both for iOS and Android. It can almost completely replace the traditional remote control, since it not only allows you to select sources (Internet radio, USB, media servers, files on a smartphone or inputs), but also adjust the volume, tone for high and low frequencies (by default, Source Direct mode is enabled, therefore tone control is unavailable) and other settings.

If you choose to play files from a smart via Bluetooth, the playback process will have to be controlled from the player’s program, and to change the volume and tone, switch to the proprietary application. By the way, the quality of playback via Bluetooth pleasantly surprised me, although the sound via Wi-Fi still seemed to me more natural, especially since Hi-Res streams cannot be transmitted via the “blue tooth” – maximum 16 bit / 44.1 kHz … The Internet radio receiver is powered by the vTuner service, which has one of the most extensive collections of stations (if not the most extensive). The reception quality is impeccable – much better than through the TuneIn PC application. The Denon DRA-100 Stereo Network Receiver embodies the company’s new approach to creating audio equipment – small size, attractive design, simple operation and maximum modern functions.