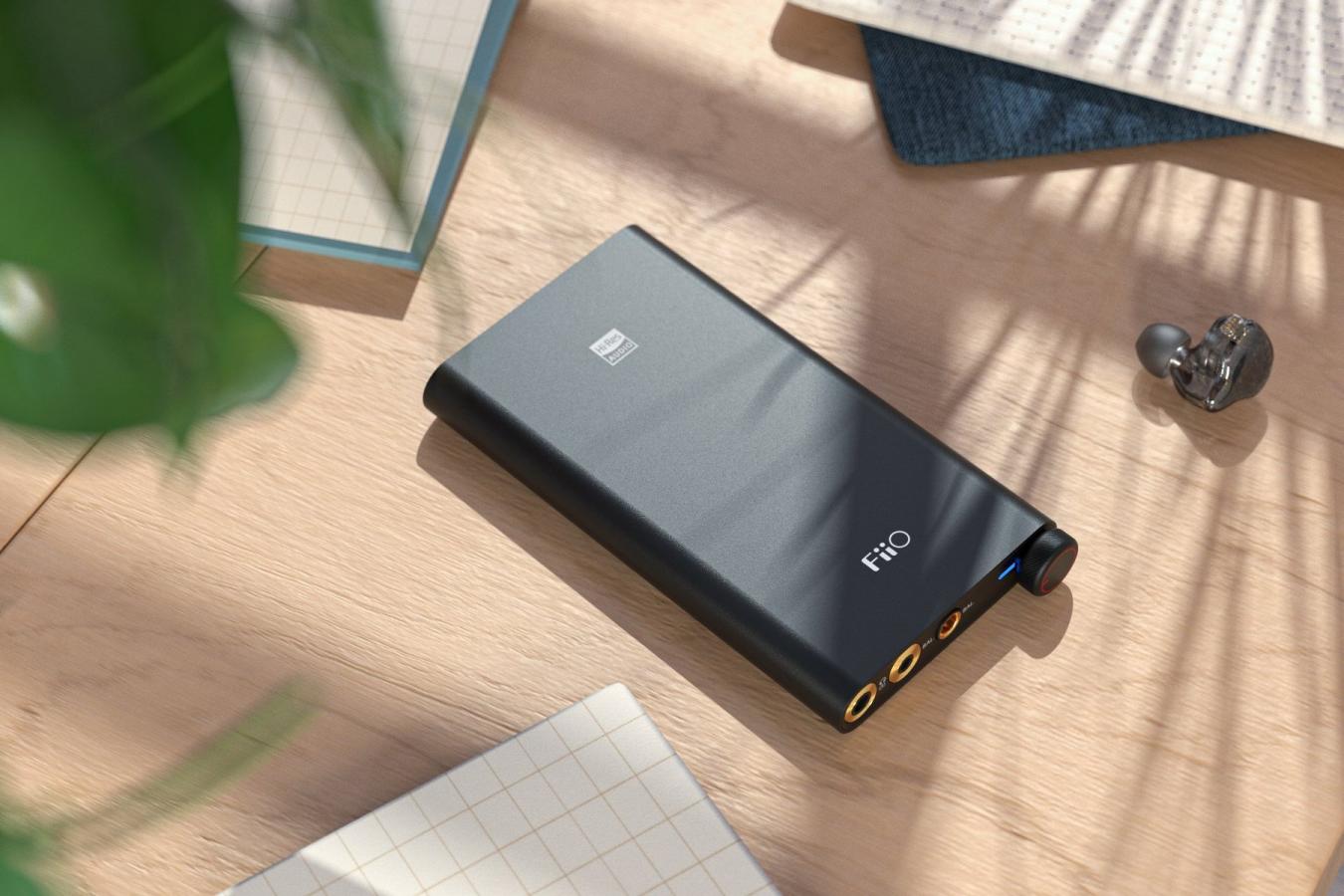 The FiiO Q3 is FiiO’s new proposal in the category of portable dac / amp with built-in battery and comes to be placed between the introductory Q1 Mark ii (which we have tested in the distant issue number 10) and the company’s flagship the Q5S.

The FiiO Q3 fits comfortably in the palm since it is small in size with dimensions 105x59x12.5mm and weight 110gr.

In appearance it is very elegant with simple and rounded lines while it is made entirely of sandblasted aluminum.

The quality and finish are very good and definitely superior to what its price predisposes.

The FiiO Q3 has an additional shield under the chassis that offers absorption of the surrounding electromagnetic radiation so that we can use it next to a mobile phone without annoying interference.

At one end of the FiiO Q3 are not one but three 3.5mm, 2.5mm balanced and 4.4mm pentacon balanced headphone outputs that cover all handset connectivity scenarios without the need to use an adapter.

An LED indicator informs us about the operating status as well as the sampling of the signal.

Next to it there is the potentiometer – on / off switch which is proportional to ADC assistance technology that ensures the correct balance of the two channels from the beginning of its journey.

At the opposite end we will find the charging port and usb C data, the switch for the analog bass boost as well as a button that adjusts the gain to low and high while with prolonged pressure we select the dac filter between sharp and slow roll off.

Finally, the charge on / off switch deactivates the charging function so that we can use the Q3 with mobile devices without drawing power from their battery.

Inside things are quite upgraded compared to the Q1 mkii since the dac chip has been replaced by the new low consumption AKM 4462 which operates in balanced mode and sends the signal to the amplifier after passing through a low pass filter.

The usb receiver is the same as the one used in XMOS manufacturing Q5S and supports sampling up to 768kHz / 32bit PCM and DSD512 with two separate oscillators.

Also read: Roon Nucleus Plus Review • A Bridge To The World Of Music

The battery is fast charging with a capacity of 1800mAh and provides operation for up to about 10 hours.

The Q3 is compatible with PCs as well as the Android and iOS operating systems while the output power is almost twice that of the Q1 mkii with 160mW / 32Ω from the simple output and 300mW / 32Ω from the balanced ones with a total supplied voltage of 9 Vp-p .

The Q3 can be used as an analog headphone amplifier but in this case the input of the signal is through the 3.5mm port which means that in this mode we can hear sound only from the balanced outputs.

As always FiiO provides us with a complete package of accessories that includes a carrying case, usb A to C – USB C to C – lightning to usb C and line in 3.5mm cables as well as connection hoses / plastic protective film for use with a smartphone.

We tested the FiiO Q3 with both Android phones and PCs without any difficulty while we did not hear any interference except once or twice which could logically be described as random.

The battery life is very satisfactory and with high resolution material and demanding headphones it reached about eight hours.

We used different headsets and iems such as the Hifiman Ananda, Sennheiser HD660S, FiiO FA9, Final Audio B3 and found that on the one hand it outperforms the balanced output with moderate difficulty headphones and on the other hand it has a fairly low noise threshold for use with sensitive iems.

To make a comparison, let us mention for example that with low classical music recordings the Sennheiser HD660S sounded loud and without distortion in about 80% of the potentiometer’s path from the balanced output.

The sound of Q3 is natural and pleasant with tonal balance and satisfactory range at both ends except for a slight cut.

The truth is, of course, that we will not pay much attention to it, while let us not forget that Q3 is not intended for critical hearings.

So listening in office or relaxed listening at home did not feel like we were missing anything special with whatever music we tried.

The Q3 has a full body and a deep low with good impact while it is quite descriptive and realistic with a nice tone and sufficient resolution.

The new THX AAA booster helps a lot as it is crystal clear and dynamic with fast shifts and a well-structured and spacious scene that does no injustice to any handset.

The simple output of the Q3 is satisfactory but what really sounded good is the balanced output both thanks to the higher power supply and the fact that it takes full advantage of the balanced circuit that has better quality sound.

The low amplification function stimulates the bass without particularly blurring the medium low range while the two filters mainly affect the way the high frequencies are heard.

Two functions that are useful as they offer the possibility of a slight configuration of the sound.

FiiO Q3 In relation to the Q1 mkii

Although the two devices have a similar sound identity they have quite a difference in the way it is rendered and this is mainly due to the THX AAA amplifier rather than the different dac chip.

So in addition to the power difference in favor of Q3 we have a clearly better presentation on its part with more dynamic and fast sound with crystal clear and clear lead in both scene performance and resolution.

In addition, the Q3 is more up-to-date with usb C port, two audio filters and mainly the charge switch which suspends the charging function and is very useful.

So honestly we do not see the reason why one should choose the Q1 mkii except for its lower price.

FiiO Q3 is called upon to face stiff competition in a market that has an oversupply of similar products.

But it stands out since at a very competitive price it offers good sound, long battery life, plenty of connections and several additional functions combined with small size and low weight.