Hegel H390 features advanced network functions with software upgrade capabilities. It replaces the H360, but you shouldn’t consider it just an improvement on a successful model.

According to Hegel, no H390 PCB is made exactly like its predecessor. As for the sound of the new product, the developers themselves described it as “smoother and more authoritative.” On the rear panel of the device there are a pair of balanced XLR and two pairs of analog RCA inputs.

They, like all other inputs, can be variable or fixed level. On the digital side, all digital inputs are routed via DSP USB. This allowed the H390 to play MQA and DSD over SPDIF, and further reduced jitter.

The USB Volume function, accessible through the menu, may allow a connected USB device to remotely control the volume of the H390. Hegel H390 received a built-in DAC, albeit in a somewhat simplified version. Integrated into the amplifier, the new proprietary streaming platform is the same as the H190 and H590 models. The developers have promised software updates to its functionality in the very near future. The list includes protocols Airplay 2, Roon, Control4 SDDP, etc. The Hegel H390 will support internet updates via the menu.

As for the actual “amplifying” capabilities of the novelty, using the proprietary Sound Engine 2 technology, which minimizes unwanted distortions, Hegel H390, according to the developers, demonstrated a dumping factor of more than 4000, delivering 250 W per channel at a load of 8 Ohms.

Hegel Integrated Amplifiers and Preamps usually have a spartan black case and a bezel containing only the input selector and volume control knobs. In the Hegel H390, they are located on either side of the black and white OLED display, which shows the selected input, the set volume level and the sampling rate of the incoming digital signal. Another feature of this company’s equipment is its exceptional reliability. The Hegel H390 has a metal body, a thick aluminum bezel and large rubber feet. The range of functions of the Hegel technique is also designed for its long-term use. When developing a networked streaming platform for their integrated amplifiers, the company’s engineers chose AirPlay to wirelessly connect to Apple technology. But instead of using a standard solution, the company has developed its own software to support AirPlay, in order to increase the speed and improve the sound.

Along with AirPlay, Hegel H390 supports Spotify Connect and music playback from PC or NAS via UPnP. DSD 2.8 playback is provided through DoP (DSD over PCM), and the amplifier can decode MQA format. The H390 currently has basic IP control with support for Control4, Crestron, and Savant used in installed systems. Finally, an upcoming software update will make the H390 compatible with the Roon platform (and it may have already happened). The Hegel H390 amplifier features a dual mono design and operates in class A / B, delivering 250 watts (8 ohms) per channel. Hegel claims that the unit is also capable of handling a 2 ohm load, making the H390 capable of driving the most sophisticated speaker systems, including electrostats.

The rear panel of the Hegel amplifier provides coaxial (BNC and RCA) and optical inputs, as well as a USB type B port for direct computer connection. There are also two sets of analog (balanced and unbalanced) inputs, each of which can be configured as an external source input or used as pass-through when using the H390 in a home theater. Fixed and adjustable analog RCA outputs and a LAN port for wired Ethernet are also provided. 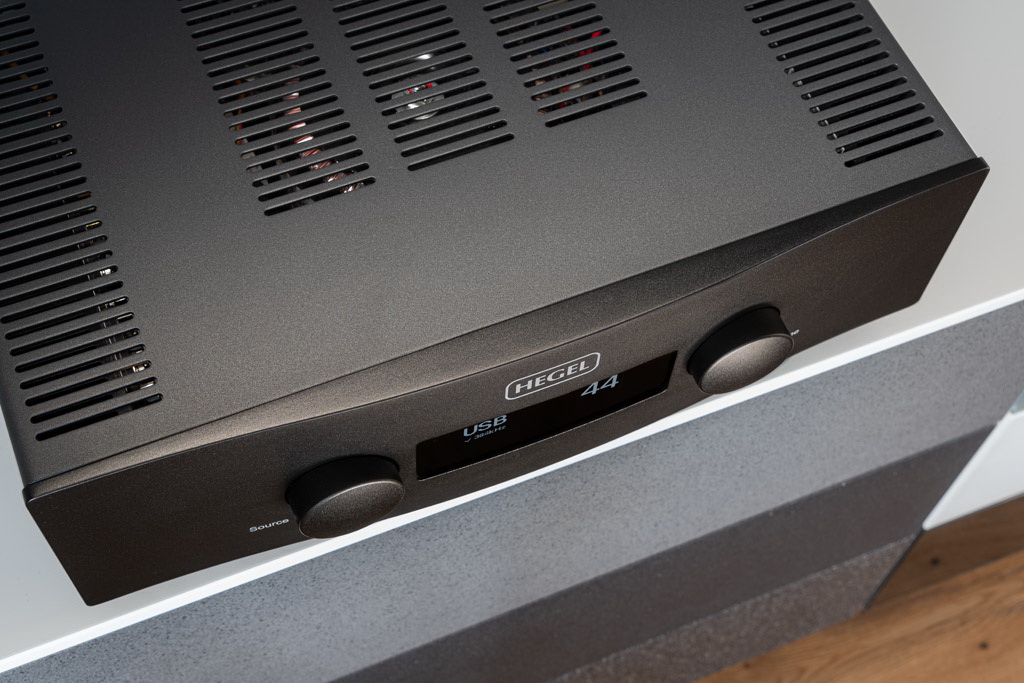 The remote control has a metal body and minimalist design, perfectly matching the Hegel H390 amplifier. The small buttons are conveniently located, with the most commonly used – input select, mute and volume up / down – grouped at the bottom. Most of the other buttons are for DACs and the Hegel CD player. There are also buttons to control music playback when using the media server software via UPnP.

To get started with the Hegel H390, I first connected it via the LAN port to my NetGear Orbi wireless router. Along with starting UPnP streaming, this was necessary for AirPlay to work with Tidal and Apple Music using my iPhone since the H390 does not have Wi-Fi. While some users may find the need for a wired network connection inconvenient, my experience has shown that it provides more stable and reliable performance than wireless. Next, you need to enter the Hegel setup OSD and check for available firmware updates that can be downloaded over the Internet. In the same place, I configured one of the analog RCA inputs of the amplifier to connect the Cary Audio network audio player / streamer, which I used during testing. I found the Hegel OSD to be a little confusing – the control buttons on the remote for use with the media server are also used to navigate the menus, and you need to refer to the manual to see how. Fortunately, I only had to go to the setup menu once during my testing of the Hegel H390.

Other signal sources I used during testing included a Cambridge Audio CXUHD universal disc player connected to a coaxial digital input and a MacBook Pro with Roon software connected to a USB input. I also used the GoldenEar Technology Triton Five and Polk Audio Legend L800 speakers in my system .

Even before I started seriously evaluating the Hegel H390, I appreciated the sound improvement it would bring to my system. The GoldenEar speakers literally came to life, as if these floor standing speakers had received a vitamin B12 injection. This was undoubtedly due to the increase in power from 150 watts, which gave my integrated amplifier to 250 watts from Hegel. I also found that the AirPlay streaming from my iPhone, which I usually only use for background music listening, produced better sound than usual. I started testing the Hegel H390 by listening to Ray LaMontaine’s CD Till the Sun Turns Black and listened to a very pleasant song Three More Days. I was amazed by the transmission of the hi-hat, which sounded clear but not annoying. The Hegel H390 managed to faithfully reproduce this multi-layered mix, even when the volume and richness of the sound reached their climax. I could clearly separate the sound of the electric guitar, drums and wind section. The bass guitar, whose line held the entire track, also retained its clarity and fullness, while Lamontane’s energetic vocals took center stage in the mix.

Next up was the Super Deluxe Edition of the Beatles Abbey Road. Streaming Because 24/96 with Tidal over Roon on my laptop provided rich, warm and tight vocals with very good polyphony. The soundstage on this track was also impressively wide, with keyboards and guitar sounding far beyond my room. Along with Abbey Road 50th, Ken Burns’ documentary Country Music has become another interesting musical novelty of recent times. Previously, my exposure to this genre was mostly limited to Hank Williams, Patsy Cline and Johnny Cash. But after watching the series, I learned about the work of The Carter Family, Jimmy Rogers, Lefty Frizzell and many others. Listening to the modern version of The Carter Family Single Girl, Married Girl (16-bit / 44.1 kHz on Tidal), played by jazz bassist Charlie Hayden from the album Family & Friends: Rambling Boy, with acoustic guitars gave a rich and natural sound, while the harmonica sounded clearly, but not high-frequency focused. What impressed me the most about the Hegel sound on this track was the exact reproduction of the singers’ disposition. It was perfectly clear that they were standing around one microphone while recording this song on the radio station. At this point in testing, it was clear that the main advantages of the Hegel amplifier were a clean and transparent soundstage, as well as accurate speaker reproduction. Both of these qualities remained in place when I listened to Prayer for Passive Resistance with Mingus at Antibes. The acoustics of the room in which the composition was recorded was almost perceptible, with an accurate transfer of the characteristics of the sound of musical instruments and vocals. They were clearly rendered against a background of complete silence, which created an impressive dynamic contrast when the drums came into play.

Most of the comments above refer to the Hegel system and the GoldenEar Tech Triton Five. However, at the end of my testing, I switched to Polk Audio’s new Legend L800 floorstanding speakers, which use two 10-inch woofers and range in impedance from 2.8 to 4 ohms. Listening again to the tracks of Ray Lamontain and Charles Mingus, I noticed that the Hegel amp was able to control the sophisticated Legend L800 speakers effortlessly, and in both cases the sound was natural and balanced even at low volumes. In addition, when playing the Midas Tongue of Sam Beam and Jesky Hoop, the percussion was conveyed tangibly and powerfully, with the necessary drive. At its cost, the Hegel H390 may be too expensive for many music lovers. But on the other hand, according to Hegel itself, it has almost the same features and the same sound as its flagship integrated amplifier, the Hegel  H590.  And in this sense, the H390 can be seen as a bargain.

Advertisement
X
Subscribe to get the best Tech news and reviews of the week.
By signing up, you agree to our Privacy Notice and European users agree to the data transfer policy.
Close
11/25/2020