Lyngdorf is a Danish audio brand with its own fan club that does not hesitate to invest in class D and room correction. But you can’t call them mainstream, in part because of the premium price tags dangling from their products. But we bet the Lyngdorf TDAI-1120 is going to do something about that. The compact body, TV connectivity and uncompromising feature list coupled with a lower price tag make it irresistible.

It’s a misleading thing, that TDAI-1120. Just like the Naim Uniti Atom, this is a relatively compact amplifier with integrated streaming. If you then look through the eyes of a traditionally inclined hi-fi enthusiast, you expect little from a device that is about half the size of a classic audio device or AV receiver. However, this is a device from Lyngdorf, a pioneer in class D and DSP technology and a brand that is a reference in the field of home theaters. It is also known for collaborating with piano builder Steinway, building the ultimate audio products that cost more than yours or mine.

However, the TDAI-1120 is a lot cheaper than those luxury products. It is a device that fits in perfectly with the trend of all-in-one devices that can really do everything, aimed at people who want to replace a system with many devices with something compact yet high-quality. It is often said that you ‘only have to connect speakers and you can listen’, but here it really makes sense. The compact Lyngdorf, for example, has a cartload of streaming options, is fully app-controllable and has an HDMI-ARC input with CEC capabilities. Thanks to this, it can work with your television. Don’t confuse it with an AV receiver, though; this is a stereo device that you can connect just as well to your record player as to your television. Connecting video sources directly or reproducing surround is not what this Lyngdorf is all about. There are no additional HDMI inputs. So the TDAI-1120 promises a lot for its 1,999 euros, but can it also deliver on that promise? 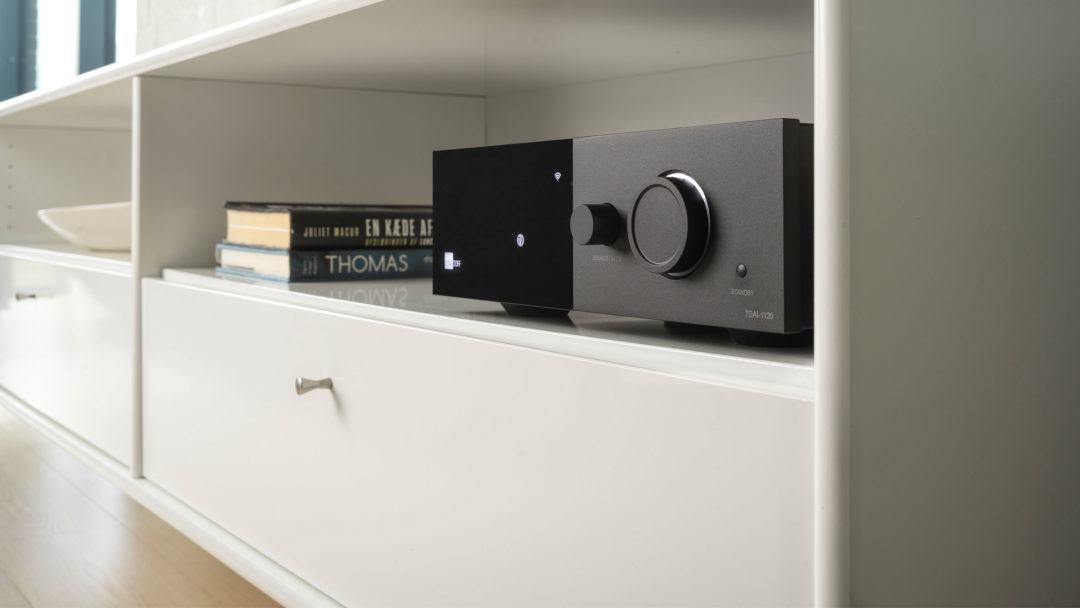 It is almost impossible to be more discreet

The TDAI-1120 is a bit smaller than the Lyngdorfs that were available to date. Its footprint is so small (10.1 x 30 x 26 cm) that you can place this amplifier anywhere. It also fits in a TV cabinet, for example. Due to the Class D technology used, it does not generate much heat, which allows for a discreet arrangement in a piece of furniture. The thing is not freezing cold either, so provide some ventilation holes if you place it behind a closed cupboard door. Easy to set up

A Lyngdorf app is available that doubles as a remote control. But you really set up the TDAI-1120 via a browser. First, you must of course connect the Lyngdorf to your network. This is very easy via Google Home or via the WiFi settings of your iPad, where the TDAI1120 appears as an Airplay speaker. Thanks to Airplay 2 and Chromecast, you can also pair this amplifier with other compatible speakers and audio devices, if you want to play music in different rooms.

Via the web interface you can access a huge amount of settings, for a stereo amplifier anyway. This of course has to do with RoomPerfect (more about that later) and the associated options. You will also find extensive options to control the integration of two stereo speakers with a subwoofer. If you choose a Lyngdorf subwoofer, you can even select by type for custom adjustment. Handy, because by using a subwoofer you can opt for compact stereo speakers that are discreetly placed in the living room.

With an all-in-one device aimed at the music lover who mainly wants to listen to music and does not want to tinker or tweak, those many options come across as a bit surprising. Yes, as a hi-fi tweaker you can do something with this TDAI-1120. Maybe even more than many rivals. But for the less technical user there could be just a little more explanation. Well, by putting these options in a web interface and keeping the remote as a ‘pure’ remote control, there is little chance that someone will accidentally get lost in it.

Inextricably linked to the Lyngdorf brand is RoomPerfect, the proprietary room correction system that emerged from academic research. The goal: to eliminate the influence of the room in which you listen to music, so that you hear music through your speakers as it is intended. Is that important? In most living rooms, yes. Hardly anyone lives in a perfect listening room, that would also be very uncomfortable. With a function like RoomPerfect you neutralize acoustic effects (such as a room mode that inflates bass frequencies) and the placement (for example, the distance from the wall). Like Athem’s ARC system, RoomPerfect is the manufacturer’s own creation, and you will only find it at Lyngdorf. This is in contrast to, say, Audyssey or Dirac, which are offered under license to audio manufacturers such as Denon or NAD. Speaking of the Swedish Dirac: Peter Lyngdorf jokingly refers to the latter software as “what we did 20 years ago”. There is a certain rivalry between the Danes and the Swedes.

As with most room correction solutions, you first have to work with a measuring microphone. You don’t have to buy anything extra, the microphone and a stand are included in the box.

f you have never performed a room measurement before, the whole process may sound challenging. One big advantage with RoomPerfect: unlike with Dirac or Audessey, you don’t have to be so careful. Because we often use those systems, we were really surprised when the interface of the TDAI-1120 told us that the measurement microphone could be placed in a randomly chosen location in the room. What a difference compared to Dirac, a system that we have often used and estimate very highly.

Only that very first measurement really has to be done at RoomPerfect at the place where you listen. Then you have to move the microphone and measure until the system has analyzed 90 percent of your room, which required four measurements for us. You can then stop, but we decided to perform a few extra measurements to eventually arrive at 98 percent.

In contrast to some alternatives, RoomPerfect does not show any curves or complicated graphs. So you cannot intervene further on the filter resulting from the measurement. But: you can always choose a view in the app that is more focused on the listening position or on a wider view. The latter is what you want when you listen to music with a few people. In addition, there are ten ‘voicings’ (such as ‘Relaxed’ or ‘Movie’) with which you can tune the sound to your own taste. If you really want it, you can also create your own voicing via the web interface. You have a number of instruments that you can use to adjust the frequency response, such as shelf filters and the like. The TDAI-1120 is a small amplifier, but offers a reasonable power of 2 x 60 Watt (8 Ohm). This is possible due to the use of class D technology, so you do not need an immense power supply or a large printed circuit board full of parts. Class D has now also become fully established in high-end audio products, so that is not an issue. In fact, Lyngdorf was one of the first brands to truly embrace class D.

For our test, we combined the TDAI1120 with a set of Rubicon 2 speakers from Dali. Not entirely coincidentally, Danes too, and even a brand with a link to Lyngdorf founder Peter Lyngdorf. In our opinion, a great match, also because the Rubicons add some warmth to the more neutral rendering of the TDAI-1120. Not a bad combination, because we never got the impression that the smaller Lyngdorf had problems driving the Dalis.

If we had to describe the sound of the TDAI-1120, we might choose the word ‘purity’. The beautiful antique interpretations on ‘Marin Marais’, for example, with the impressive virtuoso playing of Francois Joubert-Caillet on the viola da gamba, sounds very realistic and compelling in the room (via Roon). The small nuances of the string playing are perfectly conveyed, there is really all the micro detail in it. What it certainly isn’t is cold or analytic. It does tend towards a certain neutrality, which however makes Rubicons a great addition. If we flush in music after this dive into the 21 stcentury and arriving at Thom Yorke’s ‘Tomorrow’s Modern Boxes’, we are not disappointed either. The TDAI-1120 has the power to drive those deeper basses, but it is mainly thanks to RoomPerfect that it also sounds pure and detailed. We can imagine that this amplifier would hit its limits with demanding speakers (then it’s time for that TDAI-3400), so there are limitations. But RoomPerfect does ensure that you get the most out of this small amplifier. The room correction system proves to be very useful if you use this amplifier for your TV sound. The typical rumble of ultra-low basses in action movies (good example: everything from the Transformer series) can quickly activate a room mode, drowning out dialogue and music with woolly low tones. RoomPerfect was able to counter this well in our test room, which provided a detailed and grand rendering when watching movies. It is not surround of course, but in our opinion a stereo setup is in many cases a lot better than a typical soundbar.

There are many people in the world who love music but are not fascinated by the eternal upgrade rite and component thirst of the hi-fi world. For them, we think the TDAI-1120 is a pretty exciting addition to the hi-fi playing field. This device brings a lot to a price point that is much lower than before at Lyngdorf.

But also compared to the rest of the playing field, this device is a strong entry. The presence of RoomPerfect, an HDMI-ARC connection and many streaming options are strong assets at this price point. For music lovers who are looking for a compact all-rounder that will fulfill their musical needs for a long time, the TDAI-1120 is a very interesting option.

Advertisement
X
Subscribe to get the best Tech news and reviews of the week.
By signing up, you agree to our Privacy Notice and European users agree to the data transfer policy.
Close
10/09/2020