We have before us a vivid example of competent technical evolution. This slim receiver was originally designed exclusively for the lifestyle segment. But over ten years of constant modifications, it has developed into a functionally flexible and attractively priced device with which you can build a completely advanced home theater.

We are used to the fact that more or less advanced multichannels are made in housings with a height of 150 – 170 mm. Moreover, even the most respectable “fat men” often lack free space under the casing – the entire volume is literally crammed with boards, radiators and connecting cables. Nevertheless, once the engineering department of Marantz decided to hide the stuffing of a seven-channel receiver in a housing only 105 mm high (this is comparable in size to a typical stereo integrated amplifier). For this, the entire internal architecture was revised, a new motherboard was designed, high-efficiency amplifiers based on discrete circuitry with a less loaded thermal regime were developed, which do not require bulky heat sinks. And it turned out as well as possible – released in early 2010, the NR1501, presented as a “receiver, Note: nowhere is it about a functionally poor or weak device for a low-budget segment. The firstborn looked full-bodied from birth despite its compact size: it had a wide informative display on the front panel and a rather weighty transformer inside, it offered a maximum power of up to 90 watts per channel, advanced switching, Dolby TrueHD and DTS Master decoders, an advanced bass manager with a system autocalibration. Its twin NR1601 generally looked cool: it had the most modern HDMI 1.4a board for 3D video standards at that time, the latest 32-bit audio DSP and nine switched acoustics outputs.

Since then, every NR in the Marantz range has consistently become a hit. Well, most importantly, this series received the most popular and advanced AV technologies, protocols and features on a par with the main SR line: already in 2011, NR acquired a network connection, in 2012 – support for AirPlay, in 2013 – an installation assistant and control from a smartphone, in 2015 – built-in Bluetooth, in 2016 and 2017 – Dolby Atmos and DTS: X … In parallel, the company began to release more affordable five-channel versions on the same basis. And this year I decided to surprise with the Marantz NR1200 stereo receiver with a powerful two-channel power amplifier and a “classic” tone block. Perhaps we will take a closer look at this device, but for now all the attention is paid to the hot new product – NR1711. The main innovation is an HDMI card that supports 8K / 60 Hz on one of the inputs, and 4K / 120 Hz on the other five, including low latency. By the way, high-speed “gaming” HDMI specifications were included in the NR1709 model, but the “eleventh” already announced support for eARC (return audio channel for object sound formats), and this clearly indicates the compliance of the filling with the most advanced version of the standard 2.1. This is an excellent groundwork for the future – today there is nothing to experience this with, because you will need not only the appropriate sources and 8KPanels or projectors, but also special HDMI Ultra High Speed ​​cables.

Therefore, we will focus on the actual. The popular today wireless protocol AirPlay 2, as well as the correcting phono input for a vinyl turntable, received the NR line a couple of years ago. All this, including the proprietary HEOS network interface for multi-zone playback, is present in the new model. We also find all last year’s software and hardware updates: a dual-band WiFi module, high-altitude channel virtualization modes, the most convenient Smart Select function, with which you can memorize full settings profiles for any of the frequently used sources on four remote control buttons. 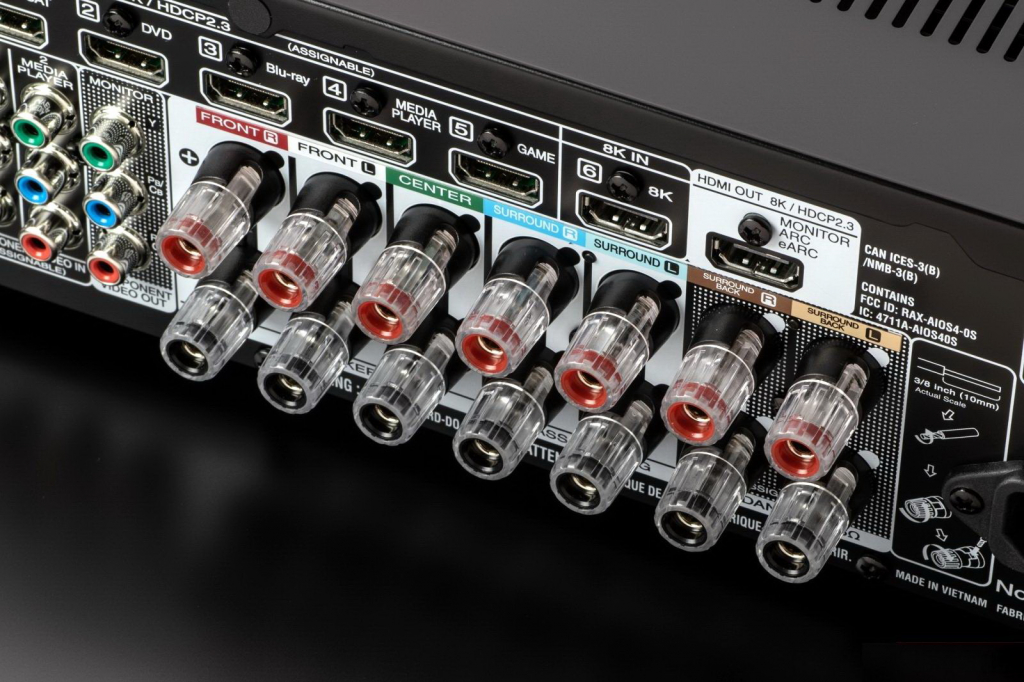 There are some innovations in the familiar graphics of the nine-language menu, which includes the connection assistant (which will allow even inexperienced users to quickly and correctly install the receiver). In Bluetooth settings, you can switch the wireless module to transmit sound from the receiver to the headphones. All settings of filters, levels and correction for acoustics can be saved in two versions. What else? The digital video path is now HDR10 + compliant, and the audio path is Roon Tested. By the way, developers, introducing new ones, are in no hurry to throw away the proven ones. Look at the back panel: analog component I / O allows this receiver to be used in a home theater system with many legacy video sources, TVs or projectors. Some would call it a functional artifact, We first tested the sound abilities of the Marantz NR1711 in a 5.1.2 system (with a ceiling pair for Dolby Atmos / DTS: X), and then arranged several runs from different sources in stereo music mode. In the first part of the tests, there were no complaints about the receiver. He himself was sufficiently well and accurately calibrated by the external microphone – the automatically measured distances, for example, almost coincided with the actual distance of the speaker from the microphone (checked with a laser rangefinder). The tonal picture turned out to be as usual comfortable and balanced, with some smoothing of the textured mibass part and softening at high frequencies.

If you do not like such a peaceful character of cinema sound reproduction, then through the Audyssey menu you can turn off the equalization of the frequency response system, and then turn on the graphic equalizer and slightly tweak the sound of the entire system or each channel separately at your discretion. But you shouldn’t be zealous. Strong forcing in the region above 2 – 4 kHz can emphasize the transistor nature of the sound of the power supplies, and all attempts to adjust the flow regulators in the low region will face the rather modest capabilities of the amplifiers to control acoustics. I advise you to shift all your attention to finding the best bass manager settings, matching the LFE channel, and finding the best place for your subwoofer in the room. For the bass driver, this will do much more. Music playback is not as effective. It is noticeable that the sound path was designed for soundtracks of normal quality, and not for audiophile tests. There is a little lack of fine resolution and harmonic clarity, not too much atmosphere and game nuances. In the scene, all imaginary sources are slightly enlarged. The air and depth situation is slightly improved when Pure Direct is turned on. There is also a proprietary enhancer M-DAX2, and it is included directly from the front panel, it can also help.

On the other hand, such a filtered, “unified” sound, practically the same for different sources, is perhaps the most correct for such a device. Otherwise, we would have heard how poorly compressed mp3s sound, transmitted from a smartphone via Bluetooth, how distorted the sound of some TV channels (despite the transition of operators to digital broadcasting standards). The Marantz NR1711 remains a receiver that, like its ancestor, “meets real needs” – in a stylish form, it provides a whole package of convenient and most needed functions today, which is what movie lovers need in the first place.