Michi X5 Review: Brings you closer to the music Under the Michi brand, Rotel decided to launch an elite-class product, something it had tried three decades earlier. Only now it is not just a model “top” assembled from the most sophisticated Rotel Hi-Fi components in a special finish, but a completely separate High End series – designed in a big way, without any savings on the element base and embodied in the most modern design … I know that such statements from the manufacturer always sound pretty pretentious, but here you can’t argue with the facts. You can put any competing component next to it and you will see that Michi and by all external features look like more expensive and solid devices – due to the unusual glass front panel, powerful metal sides with internal ventilation channels. The X5 amplifier was created as a kind of universal soldier for extreme loads, and in terms of systems, it is also very well developed. The switching functionality relative to the preliminary P5 is almost not cut down – only Line Out is removed, and the balanced inputs / outputs are represented not by two stereo pairs each, but as usual – for one source and one additional power supply. Linear RCA inputs – four pairs, digital – seven, a standard headphone output is provided.

In addition, Michi’s arsenal has a phono input that switches from MM to MC heads through the system menu, many options for graphing the output level / spectrum of the signal, a DAC on the AK4490, supplemented by an MQA converter, an electronic control system for volume, balance and timbre, as well as a module Bluetooth connectivity supporting aptX and AAC codecs. Of course, this is a weak
alternative to network playback methods, but such a channel, as my personal experience shows, is quite enough for excellent sound when playing music of standard quality (44.1 / 48 kHz) from any popular streaming service and directly from a smartphone application. Internally, the X5 is similar to the pre-P5 only by dividing the analog and digital boards into two floors. Further, there are solid differences. The entire central part is occupied by a power supply system implemented in a double mono scheme on a pair of toroidal transformers and four large high-speed electrolytes in a capacitive buffer. The final amplifiers in class AB are ideologically similar to those used in monoblocks, but due to their lower power they do not require active exhaust cooling, therefore thermal control in the X5 is provided by powerful plates that evenly distribute the generated heat to the outer radiator sidewalls. In order for all parts of the amplifier to fit freely inside, the integral case is made almost five centimeters higher than an outwardly similar one with the same chassis, although in terms of dimensions and weight it is incomparable with monoblock “eights”.

The sound of the X5 immediately captures that thorough and detailed bass basis that conquered us in the older Michi system. True, we have simplified the task of the integrated circuit a little by connecting it to the much more affordable and “lighter” Dynaudio Contour 30i (the quotes here are to the point – these are still very complicated systems that require a complete calculation from the amplifier). The second and already familiar advantage of Michi is excellent sounding over Bluetooth. With an Android smartphone, the sound is free and clean, plastic and real, there are almost no digital shades and signs of compression of dynamics, and traces of overcompression by the aptX codec practically do not make themselves felt. With iPhones, the result is slightly different: the sound also does not raise questions about the tonal balance and the transmission of dynamics, the detailing is also well conveyed, but there is always a certain tension. In any case, the amplifier (or rather the entire audio system) is not prone to any particular genre.

And this is confirmed when switching to S / PDIF inputs. Whatever music you turn on, there is just enough – excellent driving speed for old hard rock compositions, and brilliance for acoustic jazz, and tenderness for vocals, and fine spatial detail for classics … The middle is literally blood and milk. It is reproduced tightly, fresh and dashing, and a small bright accent on the upper middle (later it turned out that it was brought in by the acoustics, not the amplifier), it even fits. The top is soft, tactful, but very well-sounded – everything is clear and clear, there is no shortage of “air”. And the character of the bass is best described by the word “touching” – this one can cause “goosebumps” not with dull physical strength, but with its naturalness and content. And in that band, the X5 is so good it rivals any more expensive amplifier. The transition to USB adds a few more important touches to the described picture – all musical compositions are transmitted here with better spatial accuracy. Small rustles, creaks and other sounds of the stage are neatly manifested and integrated into the overall picture, without distracting from the main thing. High-resolution files sound not so much more informative as more vital and intelligible, and the process of listening to even test files that have set the teeth on edge again begins to fascinate.

The source of the analogue high-cut in this test was a network receiver connected via an unbalanced line. The sound turned out, in general, neutral and comfortable, but it seemed less open than from the built-in DAC in the X5 – especially to subtle timbre shades and dynamic touches. After that we connected the Luxman CD player, and in this combination the device sounded much more cheerful and richer. We also tried the X5 with a turntable. Now we can state that Michi’s phono stage in MC mode produces a rather transparent and plastic sound with almost imperceptible noise. For any pickup costing up to $ 300 – $ 500, it will probably suffice both in terms of overload capacity and in terms of overall quality. The development of dynamic contrasts is clear, filtering at the lower end of the range is delicate, but sufficient, The headphone output was not surprising. It is better not to connect highly sensitive models to it – noises will be noticeable. Headphones with a restrained bass character may also not fully reveal themselves. But the models that can be called average in all criteria will be just right – the amplifier at the telephone output is quite generous in sound texture. 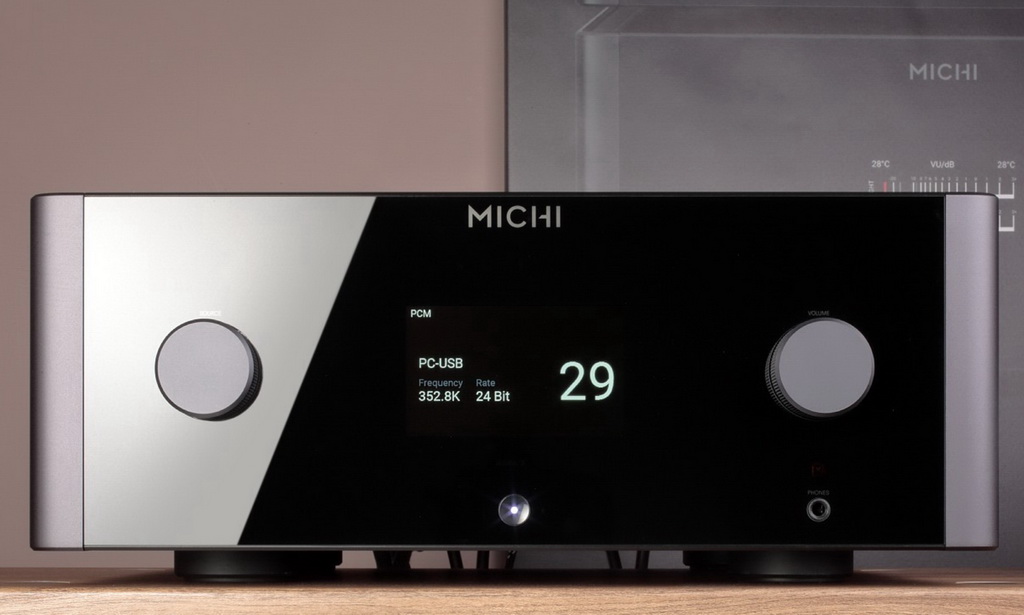 Explicit genre tendencies in the X5 appeared only after switching to the more expensive floor-standing Bowers & Wilkins 804 D3. The sound picture has become more atmospheric, pleasant sharpness has been added on the HF, and in the bass band, brazen power shades have given way to a more tactful and legible presentation. But the most noticeable change happened in the upper middle. It was due to the increased clarity that all the orchestral “brass” sounded like a real fire – in a good way, bright and naturalistic. And if paired with Dynaudio on the X-fifth it was possible to listen to everything in a row, including tracks recorded with “garage” quality or generally purely computer compositions, then with B&W such a number did not go through – only tracks recorded by the classical in studio or live mode with good microphones, with correct mixing,

In the end, I have to admit that the Michi X5 doesn’t look too much like a traditional Rotel. Yes, there is a certain corporate correctness in it, but the X5 conquers not with some technical meticulousness, not with expert accuracy and neutrality, but with its musicality and genuine emotionality. If you can imagine a system with a distant sound, then the Michi X5 will be the opposite – it will remove the distance and try to bring you as close as possible to the music.