Musical Fidelity has combined several devices in one M6 Encore Connect enclosure: preamplifier, CD player, network streamer, Internet radio receiver, external Hi-Res DAC, digital CD-to-hard drive, network storage and amplifier for headphones. The device is distinguished from the Musical Fidelity M6 Encore 225 by the absence of a built-in amplifier: the M6 ​​Encore Connect is intended, as stated in the press release, for serious systems with an external power amplifier.

The device is built on the basis of a 64-bit Intel processor, the DAC is 32-bit with a maximum sampling rate of 384 kHz (which allows it to work with signals up to 24 bit / 192 kHz on all digital inputs, including USB). Networking capabilities allow the device to serve as a “receiver” (DAR – Digital Audio Renderer), a control node (DMC – Digital Media Controller), a player (DAP – Digatal Audio Player), as well as a “transmitter” (DAS – Digital Audio Server), providing content active acoustics with support for Ethernet or Wi-Fi interfaces. In particular, the M6 ​​Encore Connect is compatible with many network speakers, including Sonos.

Musical Fidelity has 3 analog inputs, 2 optical, 2 coaxial, Ethernet and 5 USB (3 version 2.0 type A, one version 3.0 type A and one version 3.0 type B). Outputs include fixed line level, adjustable line level, headphones with a separate level control, optical and coaxial. The device comes with a 2.5-inch 1TB hard drive, which can be replaced with a larger drive or a faster SSD.

When buying separate components, we are not particularly worried about the fact that over time, some of them may become outdated. Let’s change, as a last resort, the source or DAC, and that’s it. Small, but still spending. Modern technology can save the owner from problems with updating the system. Somehow imperceptibly, the term “convergence”, which literally dazzled with headlines in audio magazines five years ago, dropped out of use. Today, we take it for granted that computer technology and home entertainment technology have merged into one. With the disappearance of physical media, the quality of music reproduction depends not so much on hardware as on “brains”, and this gives truly unlimited opportunities for further development. Musical Fidelity specialists took full advantage of this, creating the Encore Connect – a device that replaces a CD player / recorder, USB DAC, streamer, Internet radio receiver, hard drive and preamplifier with volume control. The novelty is positioned not as a rigidly configured device, but as a platform on the basis of which the necessary transformations and extensions can be made in the future. Therefore, “iron”, i.e. the design of “Connect” is solid and reliable, designed for many years of operation, and the software of the control processor (2-core 64-bit Intel chip with 2 GB of memory), on the contrary, is extremely flexible, with the possibility of regular updates. Which, by the way, is carried out via the Internet automatically, without the participation of the owner, and is completely free. Actually,

The built-in “hard drive” with a capacity of 1 TB can hold the number of uncompressed audio files equivalent to 2500 CDs. But this is not the limit – if necessary, you can install a 4-terabyte disk, and no preliminary preparation is required. initialization is registered in the device’s chip. In addition, the M6 ​​Encore Connect can not only play files, but also serve as a storage device for external network devices. Switching capabilities are provided with a margin, there are only five USB ports: 3.0 type “A”, 3.0 type “B” (service) and three interfaces 2.0 type “A”. The signal can be fed to an external DAC through two optical outputs and two coaxial ones. Supported network interfaces Ethernet 10/100/1000 Base-T with speeds up to 1Gb / s, as well as Wi-Fi, which is useful in a system with wireless acoustics. All digital inputs, including SPDIF, accept up to 24 bit / 192 kHz, the same resolution is supported on all outputs. The D / A converter operates with 32 bit / 384 kHz data. The streaming client supports broadcasting of the most popular services, for example, Tidal. The reception of Internet radio stations is provided, as well as the connection of three analog sources. There are two line outputs – fixed and adjustable, with a signal amplitude of up to 6 Volts. The device is assembled in a body of solid dimensions with ribbed side walls, which serve as heat sinks for the output transistors. The front panel is emphasized symmetrical. In the center – a large color display, which displays setup menus and a lot of other graphics, including album art and other metadata that the device pumps from the Web. There is a slot for loading a CD under it. The left knob is responsible for choosing – inputs, modes, folders and songs, and the right knob adjusts the volume. The buttons located vertically on the sides of the display are used to control playback – both CD-transport and network player. This can also be done from the remote control or through the applications for iOS and Android devices, which can be downloaded from the manufacturer’s website. 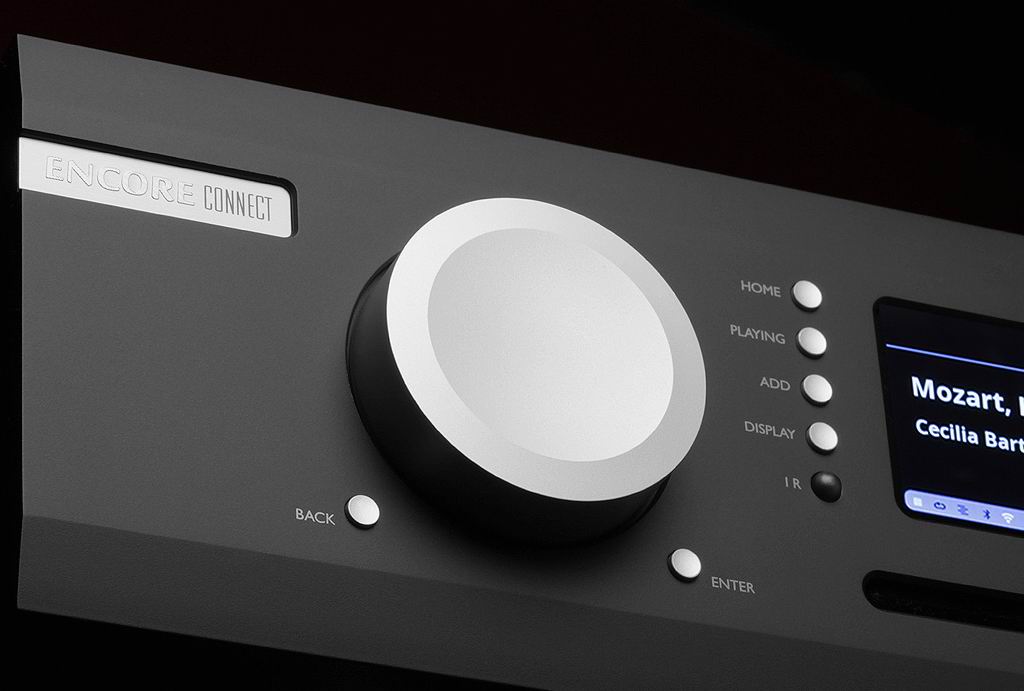 The activation of all declared functions of Musical Fidelity M6 Encore Connect will be carried out in stages. Now the device can work autonomously, playing files only from its own hard drive. They are uploaded there either from a CD or from a computer via USB B through a simple browser that appears on the screen. A list of folders, albums and tracks appears on the player display. You can control playback from a standard remote control (it has a familiar navigation ring), but it is much more convenient and visual – from a mobile device through an application.

The slotted loader is not noisy, but the mechanics are somewhat slow in responding to commands. The manufacturer, as I was told, is in the know, and is ready to fix this bug. Everything else is practically beyond criticism. Here you can feel deep bass energy, and filigree resolution in the upper range, and a lot of details in the middle. The main thing is that the sound does not have the roughness and mechanicalness inherent in many modern devices when playing 44/16 “lowers”. Musical Fidelity M6 Encore Connect behaves even more delicately when working with high-resolution files – there are more nuances, midtones and shades in the sound picture, and it itself seems more solid. Music from the hard disk is always perceived as slightly smoothed, soft, compared to that played from CDs, but here this effect is minimized. The cymbals are moderately stiff, the metal of the strings is not smeared. All genres are conveyed quite adequately: on heavy rock there is no annoying rattle, on chamber music – soporific relaxation. But the main thing, of course, is that the M6 ​​Encore Connect is a solid foundation for the future with the prospect of adding features that we cannot even imagine now.