Musical Fidelity introduces the flagship Vinyl phono stage. Like other devices in the Nu-Vista line, the phono amplifier circuits use special tubes in sintered bodies – nuvistors, which, according to the press release, provide a reference sound. The phono amplifier has five inputs, each of which works with both MM- and and with MC heads. The new product supports both RIAA and RIAA / IEC correction with a gain level of 90 dB for MM and 88 dB for MC cartridges.

The Nu-Vista Vinyl inputs feature capacitance controls from 50 to 400 pF and load controls from 0.1 to 47 kΩ, and their overload capacity is 31 dB. The harmonic distortion factor at a frequency of 1 kHz is 0.01%, which, as the developers say, has a positive effect on the clarity of the sound, allowing you to achieve “exceptional detail and faithful transmission of musical images.” From the outputs the phono stage has a traditional RCA with a nominal output voltage of 300 mV and a pair of balanced XLRs with a voltage of 600 mV.

The Musical Fidelity Nu-Vista Vinyl Corrector is assembled in a 480 mm wide full-size housing. Thick aluminum walls prevent vibration from the outside, side heatsinks are used to cool the stabilizers. For additional decoupling, standard sharp cones with thrust bearings are provided.

The Musical Fidelity Nu-Vista Vinyl phono stage has received a lot of positive feedback from both the owners and the hi-fi press. The Musical Fidelity Nu-Vista Vinyl Proofreader has recently added to the elite range of Nu-Vista components, which use nuvistors – low-noise sintered tubes – as amplifiers. This decision made it possible to improve some characteristics, which are fundamentally important when playing records. Let’s figure out what advantages miniature triodes give and how they sound in the analog path.

As time has shown, the use of nouvistors for Hi-Fi components turned out to be an extremely fruitful idea. For the sake of fairness, it should be noted that other manufacturers, in particular, Ampex and Conrad-Johnson, have also thought about it, but no one has managed to use vacuum devices that were originally intended for completely different purposes in audio so beautifully and competently. Nuvistors were developed in the mid-50s for operation in measuring and radio-receiving equipment with high sensitivity. To protect against external fields, they were made in metal cases and had a rigid structure with a ceramic base. Compact (about 2 cm high), low-noise, with a minimal microphone effect, they also had a colossal resource – from 50 to 100 thousand hours, i.e., at least about 17 years with a daily 8-hour operation.

Nuvistors 6CW4, which are used by Musical Fidelity, with a gain of 65 are characterized by increased linearity, i.e. strictly proportional dependence of the output voltage on the input. This is important for undistorted transfer of the recording dynamic range. You can simultaneously connect up to five cartridges of different types to the device via RCA inputs, and select the optimal input parameters for each of them. For MS, the load resistance is set to 10, 25, 50, 100, 400, 800, 1200 and 47000 Ohm, and for MM – the capacitance is 50, 100, 150, 200, 250, 300, 350 and 400 picofarads. This is done using the buttons on the front panel, and the selected value is confirmed by blue LEDs on the front panel. The corrector is designed for MM heads with an output of 2.5 mV and MC – with 0.25 mV. For instances with a lower output, you can add 6 dB of gain, and if necessary, to get rid of infra-low frequencies at the output, turn on the subsonic filter. In this case, the frequency response will meet the IEC specifications for turntables with increased rumble.

What are the advantages of using nuvistors in this case? First, Nu-Vista Vinyl has a whopping 31 dB overload capacity. This means that at the loudest sounds in the HF range, the amplifier will not distort. Let me remind you that on some editions with a deep groove, short-term peaks can significantly exceed the nominal value, not to mention scratches and other defects. For a lamp with a high supply voltage, it is not a problem to “digest” such artifacts. The signal amplitude on the RCA outputs can be up to 10 volts RMS, and on balanced XLRs – 20 volts. The second plus (or perhaps it should have been put in first place) is a record signal-to-noise ratio: weighted values ​​less than -90 dB in MM mode and -88 dB in MC. Accordingly, the corrector does not introduce noise into the sound or pauses. Deviation of the frequency response from the recommended RIAA does not exceed +/- 0.25 dB in the range of 20 Hz – 20 kHz. There is a non-switchable 80 kHz cut-off filter that removes RF interference from mobile phones and other gadgets.

The fully balanced equalizer circuit has four 6CW4 nuvistors providing the main gain. The balanced output and auxiliary circuits are based on modern operational amplifiers. Power is provided on a dual mono basis with separate transformers for each channel. There are 10 stabilizers in the circuit, including high-voltage 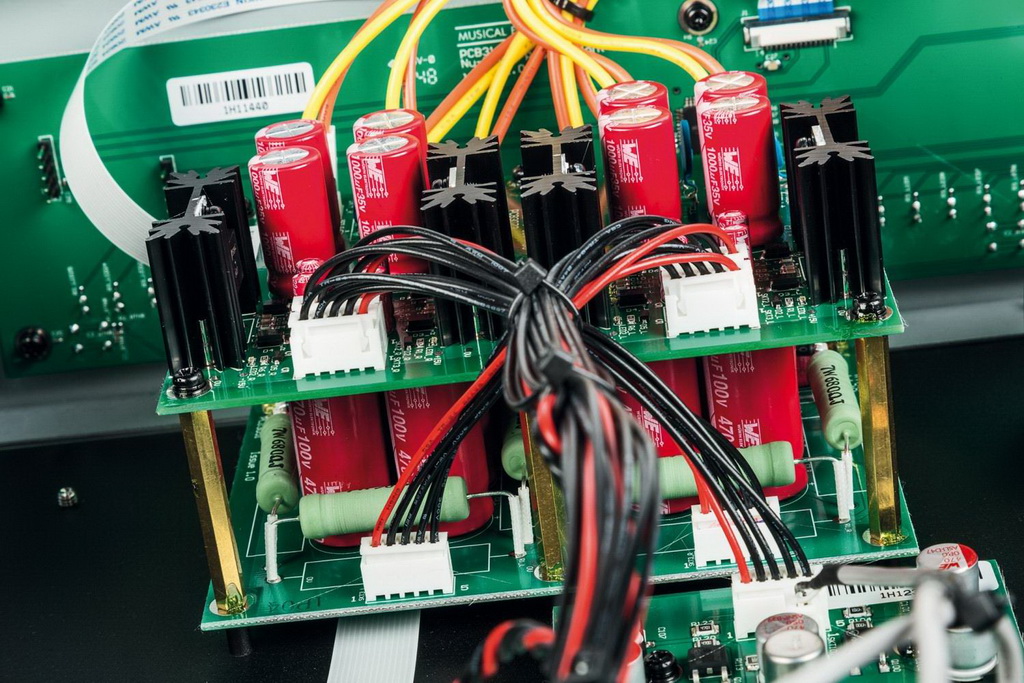 Summarizing the impressions, I note that Nu-Vista Vinyl is able to give a listener, even a very sophisticated one, much more than he could expect for such money. And not so much in terms of functionality (although it is important), but in sound. From this point of view, a rather complex device is flawlessly transparent, therefore it will harmoniously fit into the system with any components, both tube and transistor. They will determine the overall character of the sound, which will simplify the task of obtaining the desired result