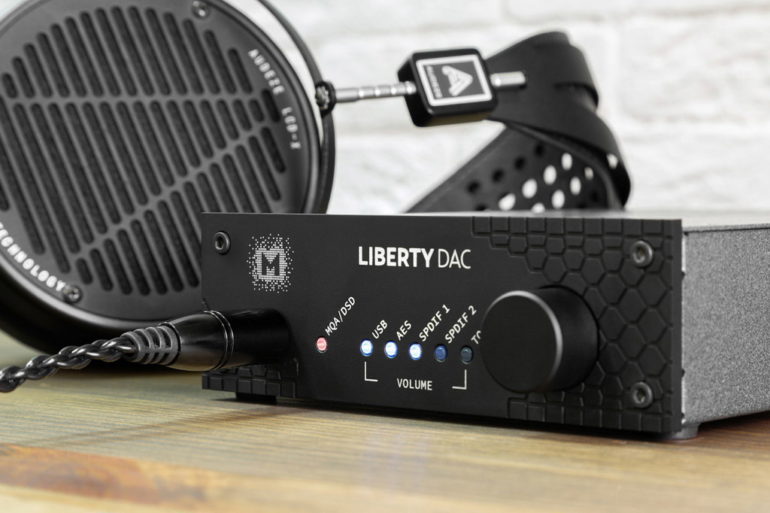 Mytek Liberty DAC is made in a compact (140 x 216 x 44 mm) case with originally located ventilation holes. The power supply is a pulsed one, which led to the small weight of the device, only 1.5 kg. The novelty is positioned as a somewhat simplified version of the Mytek Brooklyn DAC + , but without a display, built-in phono stage and a second headphone output. Nevertheless, in terms of filling and characteristics, the Liberty DAC is quite a serious thing.

As for the display, its functions are performed by a line of five LEDs, which shows not only the volume margin, but also reminds which of the inputs is currently active. There are five digital interfaces – USB 2.0, balanced AES / EBU, two coaxial S / PDIF and optical TOSlink. There are no analog inputs, but there are two types of line outputs – ordinary RCA and balanced TRS (jacks for a jack with three signal contacts). There is also a 6.3 mm headphone jack on the front panel, which can supply up to 3 watts of power.

The round knob on the right is a universal control. First of all, it is a multi-turn encoder connected to a 32-bit digital volume attenuator. At maximum output level, all five LEDs are red, intermediate values ​​are displayed in blue, green, yellow and orange. If you press the knob, it turns into an input switch, and with long presses the Liberty DAC turns on and off. A separate LED indicates that a DSD stream or MQA encoded Tidal is being received.

Like other DACs from this brand, the Liberty DAC can be controlled via the Mytek Control App for MAC OSX and Windows devices. From it, you can adjust the volume and brightness of the LEDs, select inputs and activate the BYPASS mode, in which the attenuator is excluded from the path. The digital-to-analog converter is built on the Saber ESS9018K2M chipset in a double balanced connection. The USB path supports PCM up to 384 kHz / 32 bit and native DSD up to DSD256 with 127 dB dynamic range. The specifications indicate that the jitter level of the reference oscillator does not exceed 10 picoseconds. To work with a PC under Windows, ASIO drivers are installed in the DAC. Future firmware updates will be available via USB.

Mytek Liberty DAC is a very compact device, even by studio standards. It’s no coincidence that the width of the chassis is only 140 mm – it is exactly 1/3 of the width of a standard 19-inch rack component.

Those who are staffing their home or professional studio may find this information useful. As for me, as a person considering any component exclusively for domestic use, I can only note that the Mytek Liberty DAC will successfully fit on top of a standard system unit or get lost on the desktop somewhere between the monitor, speakers and a glass of pencils. 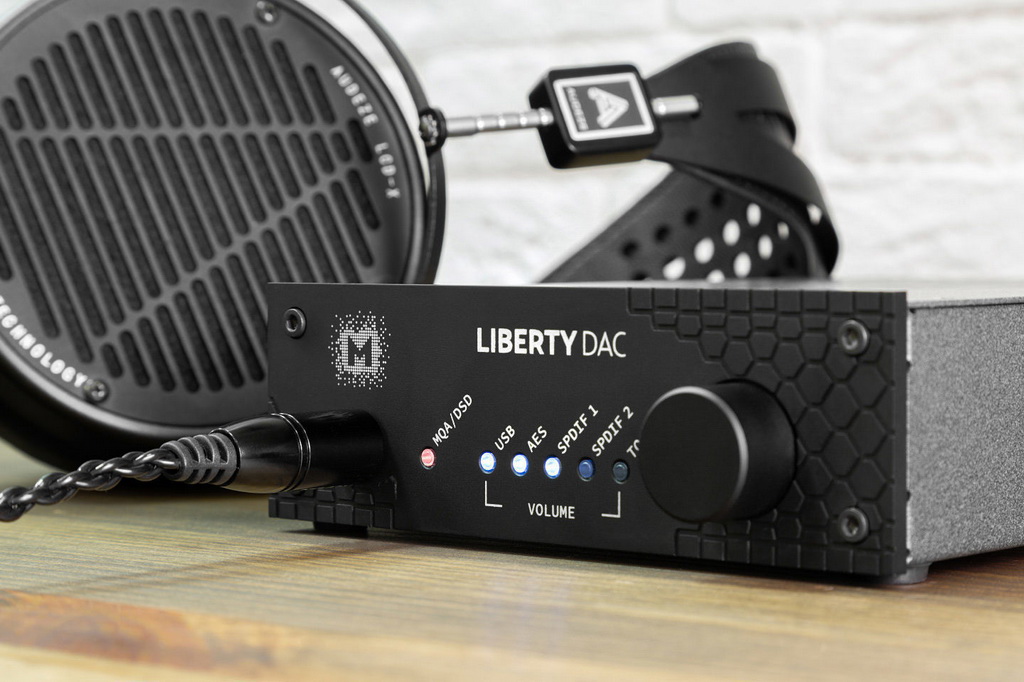 Again, from a purely consumer point of view, I would like to note that the Mytek Liberty DAC is completely different from a dull professional piece of hardware, purely utilitarian and devoid of any aesthetics. The body is assembled very neatly, and some beauty, such as milling the facade and perforation of the top cover, repeating the shape of the logo, are pleasing to the eye. The only thing that confused was the cheerful display, shining with all the colors of the rainbow against the background of the brutal black facade. It looks like a Christmas tree garland wrapped around a bronze statue of a stern military leader.

The functional purpose of the Mytek Liberty DAC is quite extensive. This is a DAC, a digital pre-amplifier with a large set of inputs and a headphone amplifier. The device has two coaxial and one optical SPDIF, AES / EBU and USB (Type B) inputs. Outputs are presented as household, unbalanced on RCA connectors, and professional balanced, which for the sake of compactness were packed in 6.3 mm TRS connectors (large stereo jack).

The most surprising thing that is found on the case is the full-size three-pin power connector. With such and such dimensions – there is also a power supply inside! However, if you follow an audiophile approach, use an external linear power supply or even a powerful 12-volt battery – there is also a corresponding input on the rear panel. 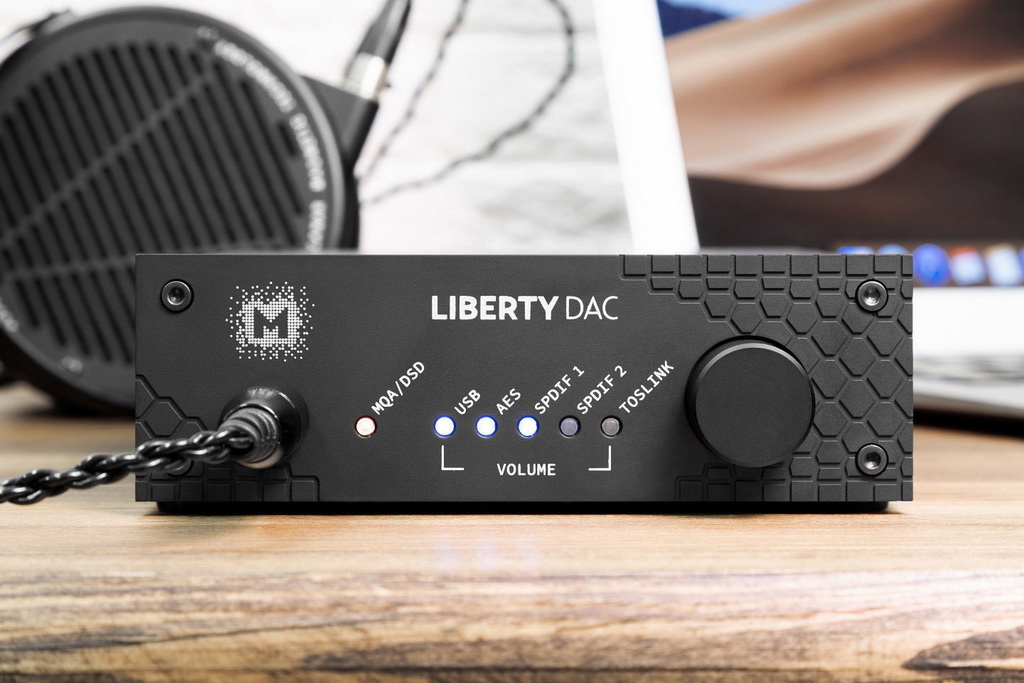 There are not so many functional elements on the facade. The only control tool is a rotary knob, a long press on which is responsible for standby mode, and a short press switches modes: input selection or volume control. Accordingly, the purpose of the row of LEDs also changes: they either indicate an active input, or are a volume indicator.

The digital-to-analog converter circuit is based on the Saber ES9018 chip from ESS. This is an eight-channel 32-bit DAC of the reference level with Hyperstream technology and native DSD support, recommended by developers for professional use as well. It has a signal-to-noise ratio of 120 dB and a dynamic range of 135 dB, which is enough to handle the most advanced digital audio formats. A large number of DAC channels were used by the Mytek developers to implement a balanced circuit, which also has a positive effect on the sound quality.

However, I was much more impressed by the built-in headphone amplifier. It is capable of delivering up to 3 watts of power, which in itself is within the power of a small number of models and, in addition, has an output impedance of 0.1 ohm, allowing you to get a high damping factor even on low-impedance headphones. The combination of these two characteristics allows the amplifier to handle heavy loads with confidence and to safely use the most powerful and high impedance models for monitoring, including planar magnetic ones. 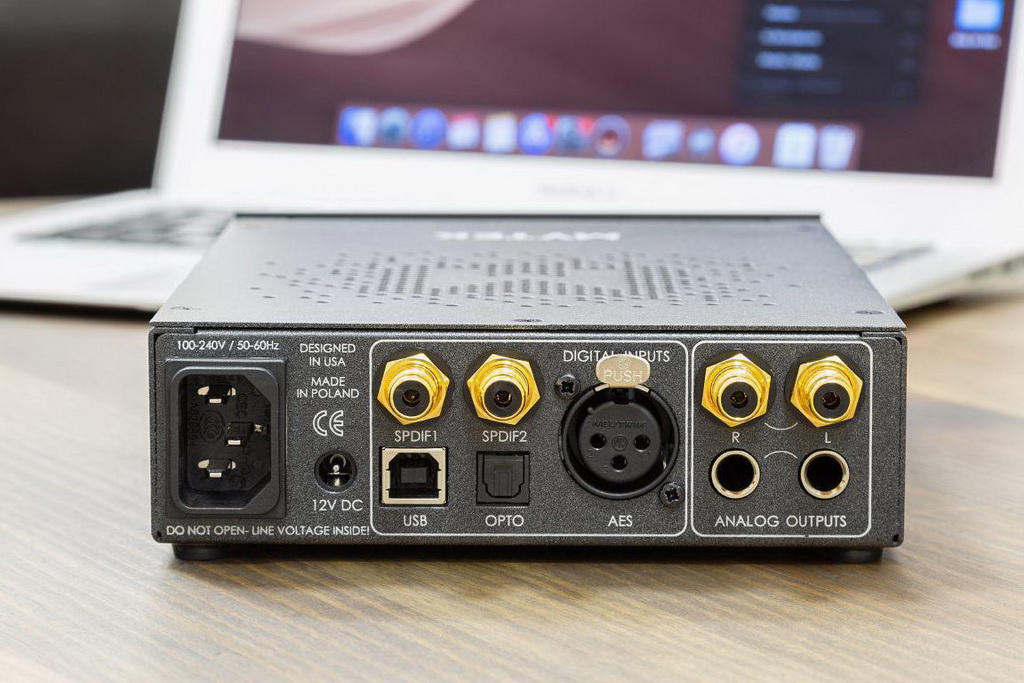 The Mytek Liberty DAC is used in a studio monitoring system with both headphones and active speakers. In our case, instead of active studio monitors, a home stereo system was connected, consisting of Schiit Audio Aegir amplifiers and Martin Logan Motion 60XT acoustics, and the operation of the headphone amplifier was tested in a completely authentic studio way – using Audeze LCD-X headphones . The role of the source was taken over by the Aurender A30, which makes it possible to listen to music both from a local server and from the Internet – from the Tidal resource.

I started listening with classic stereo, and the Mytek Liberty DAC practically did not show itself in the system – in the best sense of this wording. The pronounced presence of the source in the system was not felt. The sound was extremely detailed, transparent, perfectly balanced with perfect control of the entire frequency range. No pronounced coloration or compression was observed, as well as genre preferences. Both dynamic rock and viscous jazz – diametrically different in character and dynamics – were reproduced equally well. Pure audiophile recordings delighted with the faithful reproduction of the atmosphere and long natural after-sounds. 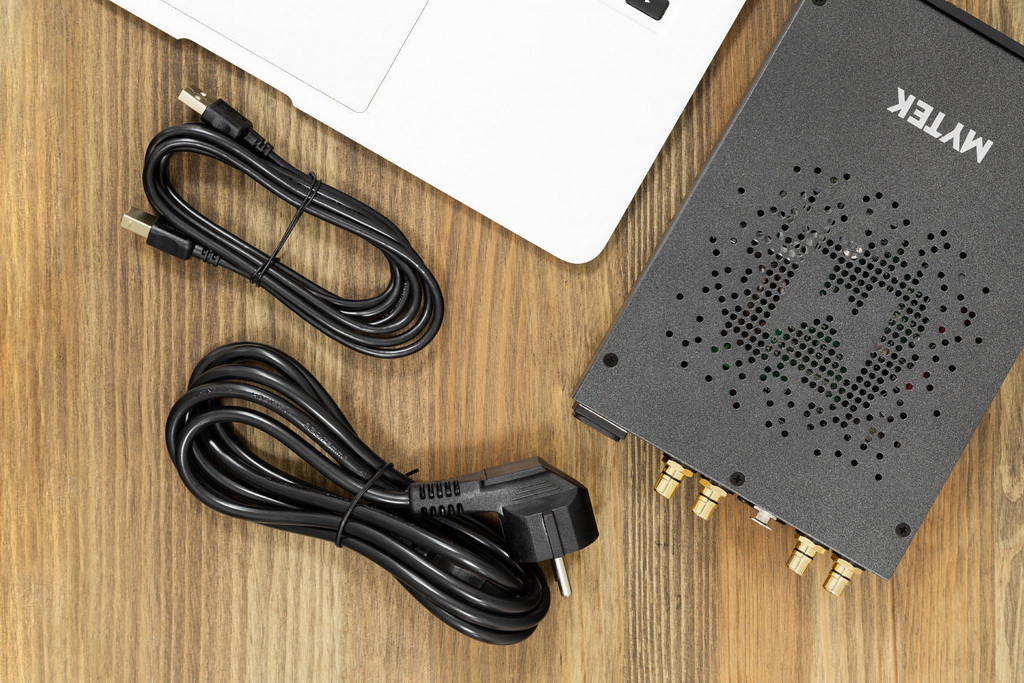 To determine the boundaries of what is possible, I had to compare the Mytek Liberty DAC with many times more expensive components, and here I already noticed some simplifications: the scene at times is not so voluminous, and the lower bass is at a noticeable distance from the listener, and in compositions where low frequencies should to overfill the room – for example, “Fibonacci” by Detsl aka Le Truk – the bass line sounds clear, but sits behind the main soundstage.

However, even with an integrated power supply, the Mytek Liberty DAC outperforms the bulk of comparable-price devices. This is evidenced by the fact that you can listen to this device for a very long time without any signs of fatigue, and a significant increase in volume does not cause discomfort.

The built-in headphone amplifier deserves special attention. Rarely are there models that can handle large planars playfully, and the Mytek Liberty DAC is exactly the case. It is quite logical when LCD-X sound great when connected to a solid device such as Schiit Audio Ragnarok, but when the same headphones are no less vigorously shaking a miniature device, it is impressive. The last time I saw such an attraction was when the huge Dynaudio Confidence 5 played confidently from a palm-sized D-class amplifier. 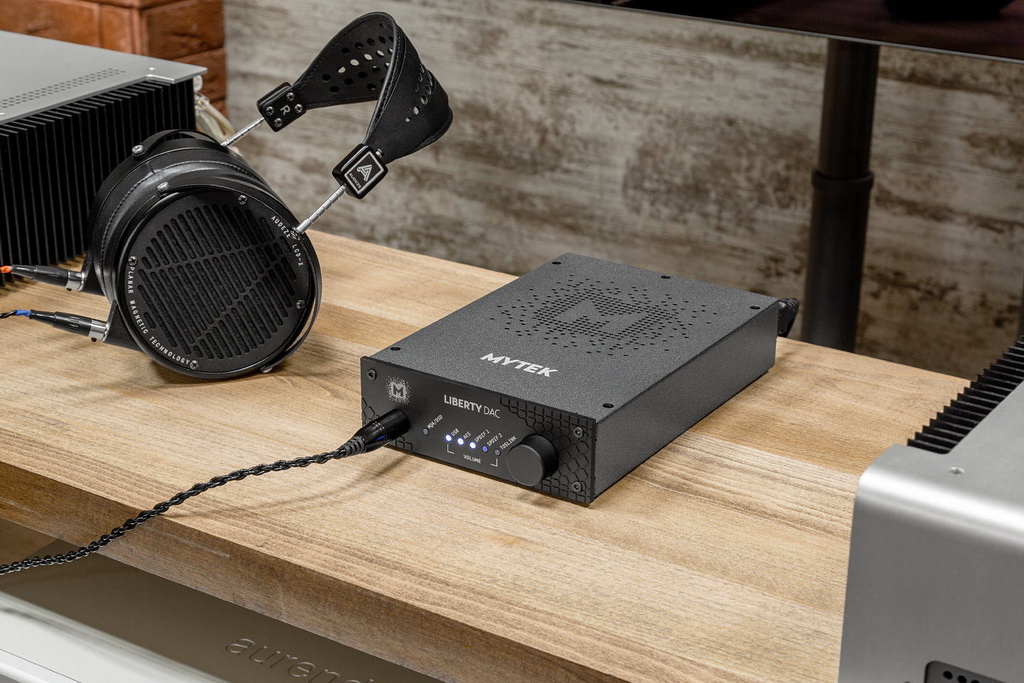 The combination of Mytek Liberty DAC and Audeze LCD-X pleased with exceptional detail, allowing you to hear the smallest nuances of the recording, three-dimensional sound picture and accurate, well-controlled, but again not exhaustively deep bass.

In both versions – both as a personal audio device and as part of a stereo system – the Mytek Liberty DAC lives up to the best expectations that can be experienced in relation to studio technology. It allows you to hear small details, but does not get carried away with dissecting music into components, it sounds natural and comfortable.

Mytek Liberty DAC is a device with an excellent balance of functionality, sound quality and dimensions. It fully justifies even its weighty price tag. Moreover, to achieve the same sound quality can only be assembled into a system of 2-3 solid components, each of which will have a comparable price. However, in the case of the Mytek Liberty DAC, I would start with a power upgrade – this is not such a significant expense, but a great chance to raise the already high quality bar a little more. 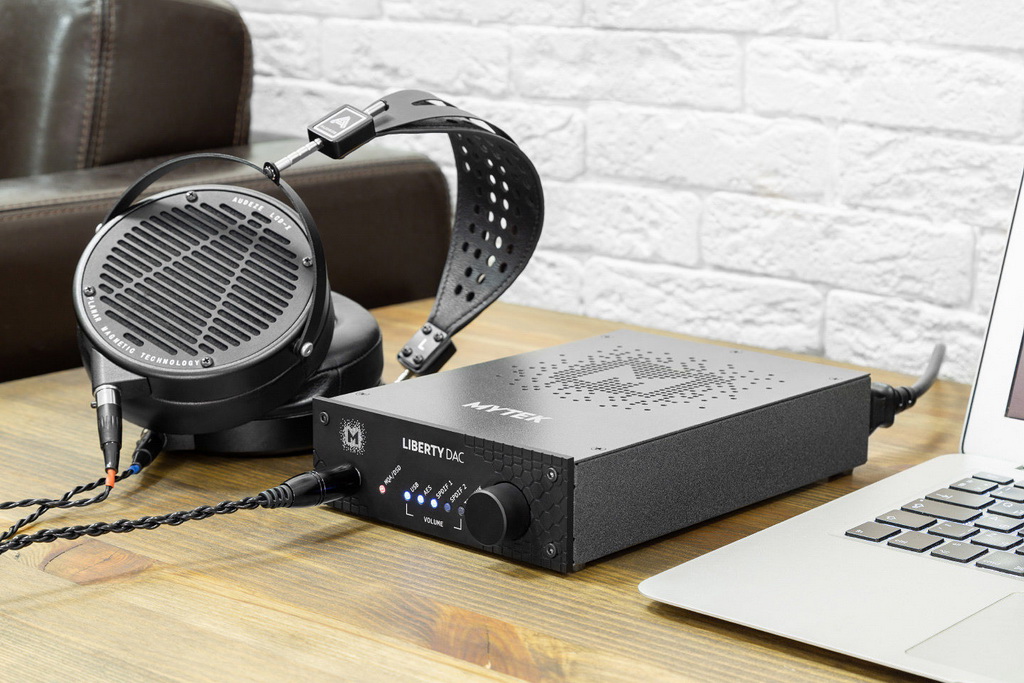 The only compelling argument that explains why the Mytek Liberty DAC is not yet on my desktop is another device from Mytek, the Brooklyn DAC, of ​​which the Liberty DAC is a simplified version. But we’ll talk about this next time.