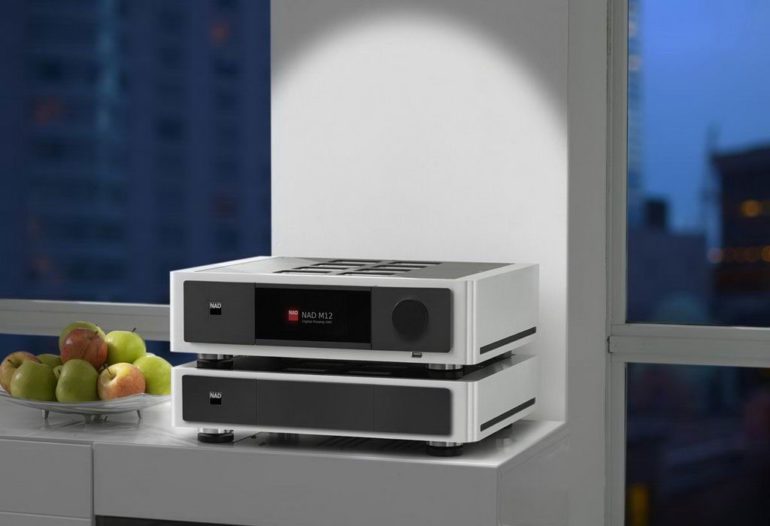 The NAD M12 is designed with proprietary Direct Digital technology, pioneered in the M2 amplifier and highly praised by experts. The DAC is assembled on a high-speed microprocessor (operating frequency – 108 MHz). Those who consider optical discs “the past century” and store music exclusively on solid-state media (or, conversely, have high-end CD / SACD transport), will appreciate the NAD M12 DAC Preamplifier.

Pulse code modulation (PCM) of the input signal is converted to pulse width modulation (PWM) with a sampling rate of 844 kHz. The process is carried out in differential mode with double precision, so the DAC provides extremely low levels of noise and jitter. The 35-bit architecture allows for extremely precise volume control. Even a 24-bit signal can be lowered 66 dB without loss of resolution. The analog output amplifiers operate in pure class A and have negligible impedance, allowing them to work in unison with any amplifier.

In addition to seven digital audio inputs, the NAD M12 is equipped with two HDMI inputs and outputs, i.e. is able to become the heart of a Video 2.0 system, working with 2-channel PCM soundtrack from Blu-ray or DVD. In this case, the video signal (including 3D) will pass freely from the HDMI input to the output.

The device can work with a source of almost any signal, both digital (there is even an AES / EBU port) and analog (a wide variety of inputs are provided, from balanced to Phono for a turntable). There is a subwoofer output with an adjustable cutoff frequency. The design of the preamplifier is made on a modular basis, which is extremely important: if necessary, the NAD M12 can be supplemented with an HDMI block with three inputs and outputs. Moreover, the company’s immediate plans include the production of a DD BluOS module, which will provide pre-access to streaming audio from a local network (NAS server) or the World Wide Web, as well as to the TuneIn service. The device can be controlled from an iOS / Android gadget. The module will also provide connection via WiFi, Ethernet and Bluetooth with support for the aptX codec.

The NAD M12 is a fully digital device, so even if you apply an analog signal to one of its line inputs, it will be converted to a digital stream, and all operations will be performed by the sound processor. With this connection, you can select the sampling rate; if this is the maximum 192 kHz, then the sound, as our listening has shown, is the best. The NAD M12 pre-amplifier uses the modular design principle of NAD – MDC: some of the circuits and elements of some of its products are placed on removable modules, which can later be replaced with modernized ones. This approach allows you to extend the service life without obsolescence. The M12 has six slots for these modules. Three of them are supplied with the standard equipment of the device: block of analog inputs; digital inputs; USB ports (type B, type A: asynchronous for PC and for flash drives and hard drives).

An optional DD HDM-1 module with three HDMI inputs and one HDMI output is available, and a DD BluOS network player module with Wi-Fi, aptX Bluetooth, multiple music services, TuneIn internet radio and control is expected to be released soon from iOS and Android devices. Digital and analog outputs are stationary.

With the help of an easy-to-understand menu, the display sets the playback mode (mono or stereo), swaps the left and right channels or signal polarity. A much more useful option is the equalization of volume levels for different connected sources. The function of tone block and volume balance of channels is provided. If the output to the subwoofer is on, then the signal parameters for it become available for adjustment. With the NAD M12, it is possible to fix the output at a certain level and use the volume control of another component in the system, for example an integrated amplifier. As we can see, this device has excellent equipment and functional flexibility. The user has a variety of inputs (even for a phono stage), to which several devices can be connected. But as our research on this NAD has shown, one of them delivers excellent sound while the others are just great. This is a digital AES / EBU input; it is often called professional, but today there are more and more Hi-Fi components with corresponding outputs. The Esoteric K-03x SACD player is also equipped with it, which we used during testing so that the NAD M12 could open up to its fullest. We connected the DAC to the same source via coaxial input and analogue balanced one with XLR connectors.

In all connection options, in combination with our reference power amplifier, we get tonally balanced, energetic, large-scale, and also timbre rich sound. It is multidimensional, transparent and detailed; the dynamics are strong and fast; rhythm and attack do not cause the slightest criticism. As for the analog XLR input, it is a little richer and more detailed than for the digital RCA – but this is most likely due to the properties of the player. 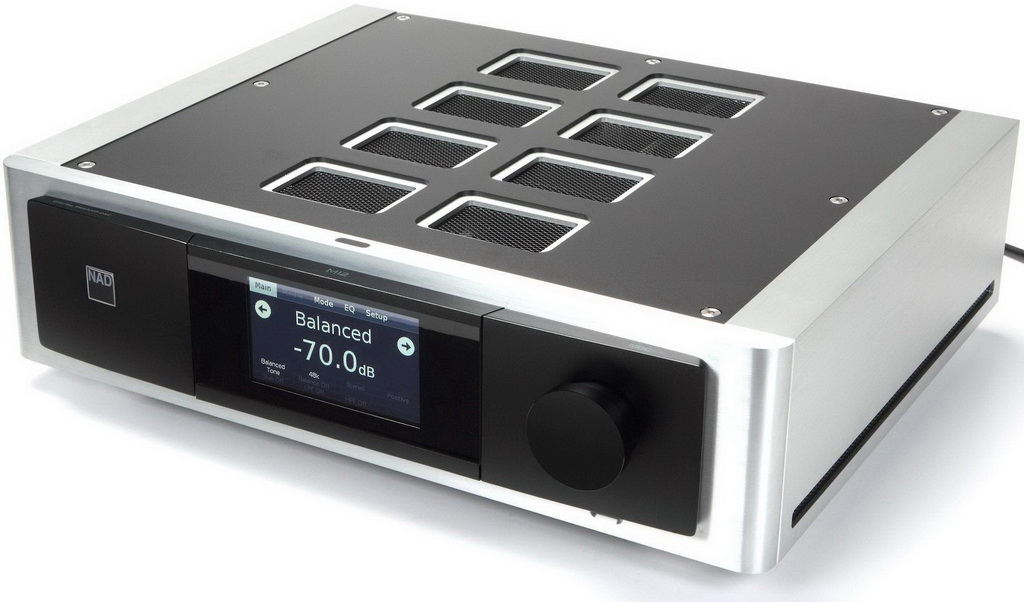 When you switch over to the AES / EBU input, it adds a strikingly crisp, spacious and accurate music scene. In the cases described above, it is also very good, but quite common and familiar. Here it acquires stunning realism; the focus seems to be reaching its limit, objects are condensed, their boundaries are outlined – and in front of you is a 3D image, but in sound. At the same time, the space is filled with air, it becomes alive. We observed a similar effect with the predecessors of the NAD M12 from the Masters series, but then we lamented (especially in the case of the M2) about the excessive analyticity and some poor sound; there is no trace of this here.

The conclusion is obvious: in the audio section, the not too expensive NAD M12 is worthy of very high-class partners; the selection of a system should be approached scrupulously if you set yourself the goal of fully revealing his talents. True, there is reason to believe that the upcoming network player module will remove the problem of finding a suitable digital source for this DAC. According to external data, the NAD M22 v2 from the same Masters series should become an ideal partner for the NAD M12 DAC preamplifier – together they form a two-component amplifier.

But first we listened to it as part of our reference system. It immediately became clear that the M22 v2 should be powered through a good network air conditioner – the sound quality improves in all respects.

When this condition is met, we note the transparency and detail of the sound, excellent energy, clear rhythm. Especially impressive is the depth and texture of the bass, which is necessary not only to convey the drive of hard rock, but also to give weight and scale to the reproduction of symphonic music.