NAD M28 Review: Capable of anything

NAD Electronics has ranked the Nad M28 as a reference class, and the configuration clearly defines the purpose of the new product – work in a home theater or a powerful multiroom. The design of the NAD M28 matches NAD’s proprietary Masters Series M17 V2i preamp processor, with which it realizes a complete 7-channel home theater system.

The NAD M28 amplifier is equipped with Purifi Eigentakt self-timing technology. The Eigentakt circuitry is used in NAD models licensed by Danish Sensation Purifi. The result is less noise and less distortion while increasing stable power. HybridDigital’s proprietary technology allows the new product to be immune to problems with long cables and various impedances of connected speakers. The amplifier delivers a solid 200 watts per channel to 8 ohm speakers, and this is an indicator of continuous power for all channels connected at the same time. On a 4-ohm load, the dynamic power in one channel can reach 560 W.

The NAD M28 looks identical to the earlier M27 and is a stunning piece of industrial design in its class. The cabinet is made of metal and has an eye-catching matte finish, and there are vents on the top panel (even Class D amplifiers give off some heat). The amplifier is equipped with four pointed legs, and NAD supplies magnetic foot pads with this model in case you decide to mount the M28 on some “delicate” surface.

The front panel of the amplifier is minimalist elegance with a simple black finish and an illuminated NAD logo. The backlight color changes from white (operating mode) to yellow (standby mode) and to red in the event of a short-circuit protection operation in the load. Instead of the usual button for turning on / off the device, a sensor is used, which is located on the upper part of the front panel. Perhaps my only complaint relates to this particular sensor, since, firstly, it is difficult to find it, and secondly, it reacts slowly to touch and you cannot be sure whether the sensor has worked or not.

In fact, it would be better if the NAD logo was also an on / off button at the same time, but I guess I’m just nitpicking. Plus, if you’re using the M28 with an AV processor, you can simply use the 12V trigger input without having to worry about turning the amp on and off manually. The M28 has a fairly compact dimensions of 435 x 156 x 380 mm (W x H x D), yet weighs an impressive 21.2 kg.

In terms of connections, the M28 has seven RCA inputs and seven balanced XLR inputs. One or another connection is selected using toggle switches, and for each channel there is a mode indication on miniature LEDs. They should be green under normal operating conditions, but if they turn red, overheating has occurred. Each amplifier channel is equipped with gold-plated output screw terminals. Also on the rear panel there is a trigger input, a button for controlling the brightness of the NAD logo and a power switch.

An important advantage of the NAD M28 is its use of Class D amplification in combination with Purifi Eigentakt technology. Class D is often criticized by audiophiles because they believe that this impulse technology deprives amplifiers of some degree of sound fidelity. But class D amplifiers also have certain advantages, in particular, it is an increased efficiency.

The problem lies in the need to use filters at the output of amplifiers that would remove the noise generated by class D devices due to their circuitry, and their potential negative impact on sound quality. The ideal solution would be to create an amplifier that combines Class D efficiency and power output with the musicality and transparency of Class A / B circuits.

The Danish company Purifi offered its solution to this problem by developing the Eigentakt amplifier technology, and eliminating the problems associated with the use of the output filter. In addition, the Eigentakt amplifier behaves almost like a class A / B in clipping mode. While traditional Class D amplifiers can become unstable when overdriven, Eigentakt provides gentle clipping without damaging the speakers.

NAD has already applied Eigentakt technology to its M33 Masters Series Integrated Amplifier and has now implemented it in the M28 Power Amplifier. In addition to efficiency and improved sound quality, another advantage of Class D amplifiers is the increased power output. As mentioned, NAD claims the M28 can deliver 200 watts into 8 ohms and 340 watts into 4 ohms with all seven channels running simultaneously.

The NAD M28 was tested with a reference-grade Lyngdorf MP-60 AV processor using XLR in a 7.2-channel system. It used MK S150 speakers and a pair of V12 subwoofers.

As soon as I turned on playback, it immediately became apparent that NAD was not exaggerating about the power output of this model, and the amplifier easily coped with driving 4 ohm MK speakers.

Nick Mason’s recently released Blu-ray Concert Saucerful of Secrets at The Roundhouse gives you the opportunity to test the amp’s capabilities for multi-channel music playback. And I must admit that the NAD M28 does not disappoint. This disc features a superb uncompressed 5.1 LPCM soundtrack, and the combination of the MP-60 and M28 captured the vibe of a live concert wonderfully. You literally immerse yourself in the crowd, and when the band perform classic Pink Floyd compositions from the late 60s, you feel as if the musicians are playing right in front of you. This sense of realism in sound is largely due to the amp’s inherent detail and clarity, which makes it easy to hear every nuance of performance on See Emily Play or Interstellar Overdrive. At the same time, the amplifier has sufficient dynamics and power, as well as a wide sound stage, 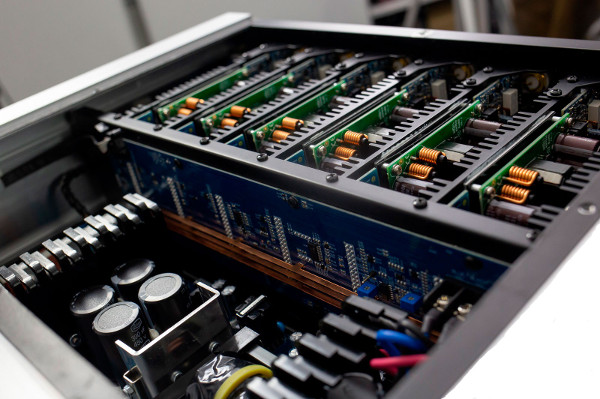 The M28 is certainly capable of making those who are critical of any Class D amplifier rethink their views. Overall, this amp delivers the highest fidelity that even the most demanding audiophile will surely enjoy. The movie Free Fire, as its name suggests, is essentially one endless shootout in a warehouse, and its 5.1-channel soundtrack is full of bullets and ricochets that fill the entire room.

The soundtrack also boasts a wide dynamic range, which gives the sound of a large bore rifle real power and echoes throughout the warehouse. During the firefight, bullets can be heard ricocheting off the columns and sweeping across the room with alarming precision, all demonstrating the M28’s ability to sound equally energetic and detailed.

The M28’s dynamic performance has also been tested in the film A QuitePlace, in which very quiet scenes are replaced by loud ones. NAD perfectly showed its ability to confidently reproduce both the breathing of a kitten and the deafening roar of monsters immediately following it. This amplifier very accurately fulfills the sharpest changes in sound volume.

However, for most of this film, entire scenes take place in near total silence, but they are not silent. Here, the M28’s ability to convey the smallest sound nuances and its overall transparency play a role, thanks to which it was possible to clearly distinguish the buzzing of insects or the rustle of foliage in the wind. Also noteworthy was the very precise placement of effects in the soundstage provided by the NAD M28.

The ability of the M28 to transmit the dynamics of the recording was retained even when all its channels were working at maximum load. The first episode in the movie Ready Player One is a great example. The amplifier’s ability to drive all seven speakers simultaneously is impressive, and despite the richness of events on the screen, each channel sounds perfect.

The NAD M28 is a smartly designed and eye-catching amplifier that proves that today’s Class D apparatus is capable of much more than you might imagine. Purifi Eigentakt technology delivers clear and transparent sound energy transmitted with high fidelity. This amplifier is incredibly detailed, with a wide dynamic range and more power output than you really need.

The M28 isn’t cheap, but it’s a high-end model, so that’s to be expected. I also realize that some people may still prefer the sound of a more traditional amp, but this is an excellent power amp that complements the NAD M17 V2i or any other high-end AV processor.

In fact, my only gripe is that NAD did not take the same modular approach in the M28 as in other Masters amps. The reality is that seven channels of audio may not be enough these days, and the M17 processor, for example, has 11 channels of output. Therefore, it would be nice if you could increase the number of channels by adding modules as your system expands.