NAD Electronics introduces the updated T 758 V3i AV Receiver. The new product differs from its predecessor – T 758 V3 in support of AirPlay 2. Together with it, the use of the voice assistant Siri became available. Otherwise, the T 758 V3i remains an exact copy of the previous model, while still maintaining the corporate philosophy of “simpler is better”. This model is said to be aimed not only at home theater enthusiasts but also audiophiles.

In the AV receiver, digital audio and video circuits are placed in separate modules, which can be replaced with more modern versions in the future. The existing AM230 audio module supports Dolby Atmos and DTS-HD Master Audio processing and is also capable of MQA processing. The PowerDrive circuit is responsible for the amplification,. The Speaker iQ auto-calibration system and included microphone allow the AV receiver to sound properly in a specific room in minutes. The Dirac Live Room Acoustic Correction feature is also useful.

The output power of the NAD T 758V3i is 2 x 120 W into 8 ohms in stereo or 7 x 60 W / 8 ohms in all channels. Do not compare these values ​​with the marketing figures of amplifiers such as Onkyo, Yamaha, Denon, Marantz, Pioneer, etc., which in most cases declare very high power, but often these data were obtained with only one working channel and with a high level of harmonic distortion.

The model supports all HD audio formats such as DTS-HD Master Audio and Dolby TrueHD, Dolby Atmos (DTS: X will be added with a future firmware upgrade). This amplifier has a pair of assignable outputs in zone 2, additional rear channels, but no additional channels for the Prologic IIz front height speakers (only ProLogic II and IIx modes are available). The capabilities of the VM130 video module include 4K video at 60 fps, 4: 4: 4 color space and HDR. There are three HDMI inputs in this model with one output. The AV receiver’s HDMI functionality includes ARC and CEC return channel. There is also a USB input, and from the rest of the digital audio connectors, a pair of coaxial and optical inputs are available.

Like many other NAD products, the T 758 V3i is part of the BluOS multi-room system, allowing it to play Hi-Res music (up to 24-bit / 192 kHz) from local sources and streaming services. The AV receiver and other devices of this system can be combined into groups.

A modern receiver is unthinkable without HDMI ports, and the more, the better. The younger NAD model only provides you with three HDMI inputs and one output. This is a real cost of living, but 4K, HDR, ARC audio return channel and HDMI CEC control channel are supported.

The receiver has the ability to amplify 7 channels, giving out 60 watts for each. An important point – the company, like few others today, indicates an honest figure with full load of all channels and minimum THD. These 60 watts are enough for a room of 20-25 m². For the Atmos configuration, there are two pairs of line outputs from the preamp, so an additional amplifier will have to be used to drive two or four more ceiling speakers. But all the main channels in the NAD T 758 V3i have a preamp output, which is rare these days. Thus, this receiver can be used as an AV processor, and then the power of the built-in amplifiers will not play any role. By the way, DTS: X support is promised, but it’s not very clear when. 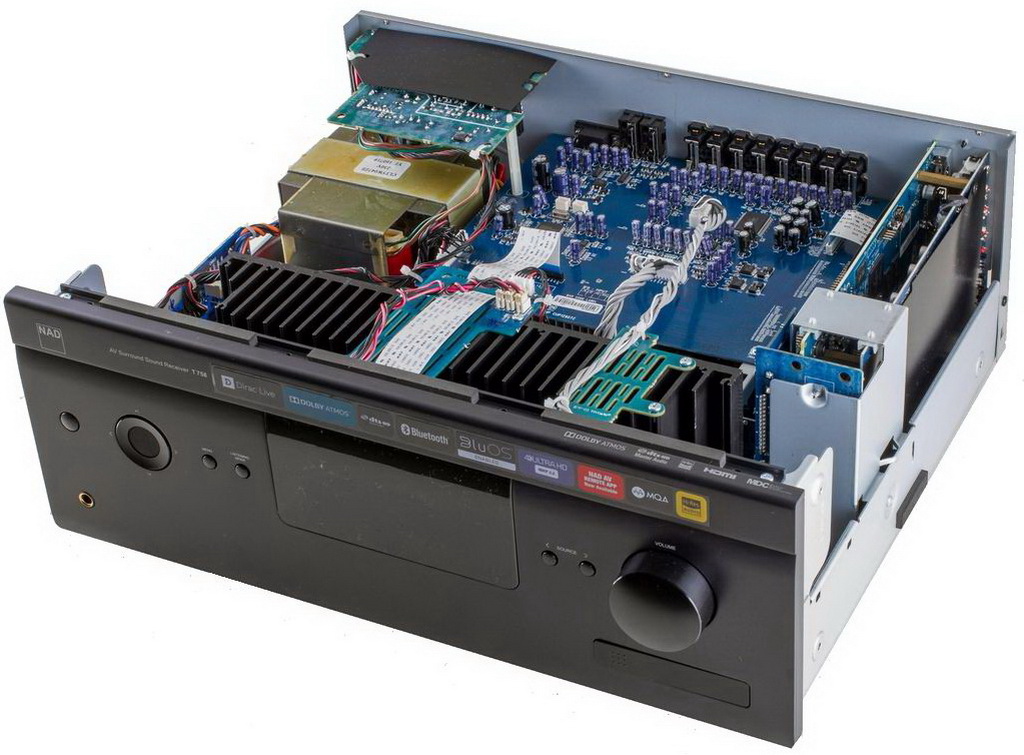 The device can be controlled both in the traditional way using a very convenient remote control, and from the NAD Remote application, which is available for iOS and Android. An RS232 port is provided for control systems. It is impossible not to mention the proprietary streaming system BluOS, which is fully supported by this receiver. Within the framework of the system, you can both listen to Internet radio and stream high-resolution files from network storages, for example, Bluesound Vault 2.

So, the first thing I noticed after unpacking is the solid weight of the device, and through the multiple ventilation holes I saw a massive transformer (Ш -shaped, not toroidal). Confused by a strange set of accessories, including a USB hub, some dongles for it, a microphone, an external USB sound card, an adapter for a microphone … In general, you cannot do without instructions.

It turned out that the NAD T 758 V3 connects to a network (local, not electrical) via Wi-Fi, but to get this Wi-Fi, you need to connect a USB hub to the connector on the back panel and insert Wi-Fi and Bluetooth into it -dongles. On the same AVSforum there are people who used certain USB-Ethernet adapters, while the receiver got access to the network, but the BluOS system did not work. 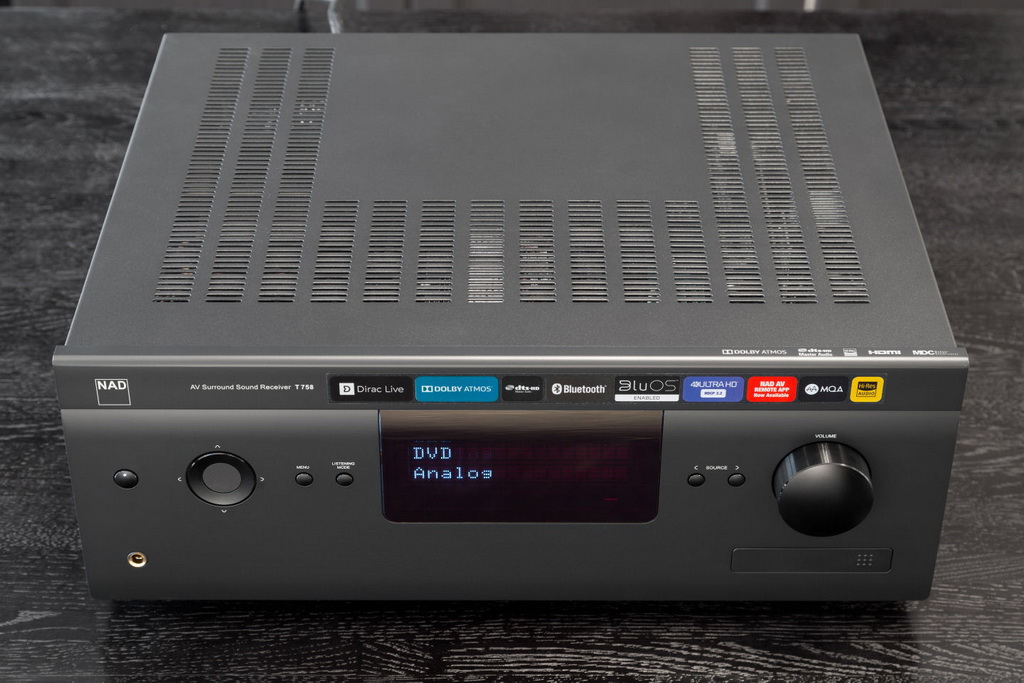 The reason for this decision by Lenbrook engineers seems to lie in the platform. You may already know that NAD has been using the modular concept of MDC (Modular Design Construction) since 2006, which allows you to change the modules in the receiver to more modern ones. As a result, there is no network interface on the main motherboard; it is installed on just one of the cards, for example, in the 777 V3. The younger model does not have such a luxury (like 6 HDMI ports), so Wi-Fi and BluOS are implemented via the USB connector on the rear panel. If Wi-Fi reception is poor, you can use the supplied USB extension cable.

To configure this same Wi-Fi, there are two ways – short and not very. Both are very non-obvious if you don’t read the instructions. Short – pre-install the BluOS application on your mobile gadget, it will help you configure the system. Long – read the instructions, connect to the receiver (it creates its own access point), enter its web interface, configure everything there. It would be logical to assume that the setting would be in the receiver’s menu – but no, the Canadians went their own way. After the receiver has access to the Internet, it’s time to update it – this can be done without any problems through the settings menu (for example, my Arcam required downloading files to a USB drive and updating exclusively from it). The process is very fast, it takes 5-7 minutes, and the device is ready to work. I carried out the adjustment in two ways: classic (with measuring distances and noise level with an SPL meter) and newfangled using Dirac.

With the second method, another aspect of the unconventional thinking of Canadian engineers came to light. To connect the supplied microphone, there are again two ways: directly to the receiver through the front panel and through the supplied external sound card with a USB interface. I chose the second one, considering that this is probably easier. I was wrong: it turns out that you need to put a micro-adapter on the 3.5 mm microphone jack, too, to 3.5 mm, but with a different pinout. Why it was impossible to make the initially necessary wiring is a mystery. However, for a really high-quality setting, professionals recommend using alternative microphones: XTZ (recommended by Dirac) or UMIK-1 from miniDSP (recommended by members of the forum) – both have calibration files that are loaded into the software and allow you to correct the resulting frequency response taking into account the error of the microphones themselves. This system is the development of the Swedish company of the same name, which has set itself the task of creating an algorithm that makes it possible to bring the sound of specific acoustic systems in a specific room closer to the ideal, as well as to fight all the problems of this room – standing waves, reverberations, etc. Oddly enough, but the first customers of Dirac were automobile concerns – BMW, Rolls-Royce, Volvo, etc. From the home category, Swedes use algorithms: Pioneer, Datasat, Barco, Theta Digital, Arcam, Emotiva, Storm Audio, AudioControl and now NAD.

The system requires taking measurements at nine points, supports the calculation for both a single listening position and for a sofa and even chairs in several rows. The correction is carried out not only in the frequency response, but also in the impulse characteristics. Based on the measurements, the system itself calculates distances and levels, as well as correction curves that you can set yourself. An important point – the program is installed on a PC / Mac and in the process of work must have access to the Internet, since all calculations are carried out on the Dirac server. Even for an experienced user, the process takes at least 40 minutes, moreover, “automatic” adjustment is far from always optimal. But this is a feature of Dirac algorithms and has nothing to do with NAD specifically. You can read about the result of the system’s operation below, but for now I would like to convey to you one important thought: Dirac is a powerful tool for combating room imperfections, it has enormous capabilities, and the devices equipped with it have a clear advantage over everyone else.

There is only one caveat – customizing Dirac by an amateur will lead to an absolutely unpredictable result, which can both please and disappoint. To achieve a clearly predictable effect, you need to understand what all these graphs mean and what you should strive for. Although the software is constantly being improved, and in the near future, perhaps, it will be enough to press the “automatic optimization” button – and the result will be guaranteed to be excellent. In the meantime, you should rely on the experience of professionals or study the branches on NAD / Arcam / Datasat, where some users willingly share their experience and can prompt a beginner.

One more point – Dirac Live has two versions: Full and Lite. NAD uses the latter, which is limited to a frequency range of 20-500 Hz. In fairness, it should be said that it is in this range that most room problems appear. Anyway, for $ 99 you can buy a license for the full-featured Dirac Live.

The same Arcam uses the full Dirac Live, but there is one annoying limitation that NAD does not have – the ability to record only one setting. With NAD, you can record as many as three and, if necessary, switch between them. This is very convenient if one curve is implemented for cinema, and another for music. Specifically in my case, these are two different listening places, an armchair and a sofa, located at a certain distance from each other. So in Arcam, to change the Dirac profile, you need to load it from your computer, and in NAD, just a few buttons are pressed. The NAD T 758 V3i is a very interesting device for its money: it is modern, equipped with one of the most advanced signal correction systems for the room, and it also sounds worthy both on film material and on music. Yes, it has its drawbacks: some things are implemented without regard to ergonomics, there are frankly few HDMI inputs, plus you will have to spend time dealing with Dirac or pay a professional. If all of the above does not scare you, and besides, there is an opportunity to pick up a speaker, then the NAD T 758 V3i is certainly an interesting candidate and at least worth considering.