The Parasound NewClassic 200 Integrated has the ability to control the configuration of triphonic – with satellite speakers and an active subwoofer. The built-in power amplifier module is an up-to-date development from the well-known Danish company Pascal. The Danes have made it possible to “fit 110 watts RMS per channel into 8 ohms in a very thin 1U chassis.”

“Integrated amplifiers with DACs for serious music lovers have replaced the venerable stereo receiver as the entry-level system,” said Richard Schram, President and CEO of Parasound.

The Parasound NewClassic 200 Integrated gives audiophiles on a budget an affordable and reasonable path to a better system. For just $ 300 more than a preamp, you can get a system with power amplification and outstanding preamp features. The preamp outputs provide the ability to add a separate power amplifier in the future. ”

Versatility is one of the most powerful trends of our time. However, different developers approach it completely differently. While some strive to fit the entire home theater setup in a narrow soundbar box, others do not deviate from the classic block layout, but maximize the functionality of individual modules. This approach is also implemented in the new Parasound amplifier, which has expanded to the original NewClassic line.

Parasound is one of the few high-tech companies that still prefer not to spray energy into fashionable, but non-core areas like headphones or vinyl turntables. On the other hand, the guys from California manage to make amplifying equipment in such a way that music lovers, installers, and sound engineers of Hollywood studios have been buying it with pleasure for three decades. This, by the way, is not an abstract bragging – the company’s website contains a list of film companies and specific big names that those who wish can familiarize themselves with. In short, Parasound is doing well, and, by the way, unlike some brands that change owners almost every year, it still operates under the leadership of the founding father Richard Scar, who created the company almost exactly 40 years ago.

At the moment, the Parasound catalog includes four lines, which include a total of 21 amplifiers, five phono stages, and two DACs. It is interesting that there were no integrals in the assortment for many years, then they began to appear in the older lines, and only last year a hero of our story appeared in the younger NewClassic family, who received the simple and logical designation 200 Integrated. In fact, this is an extended version of the 200 Pre, devoid of power amplification, as you might guess.

Those who, in real life, have not come across the proprietary design of Parasound, at the first meeting, will surely be surprised by the low, but extremely wide and deep enclosures of the components. I’ll make a reservation right away that all of the following does not apply to the topmost HALO line. Its appearance is associated with the most classic home hafai. Especially if you close your eyes to the blue illumination of buttons and indicators. However, today we are not talking about them. 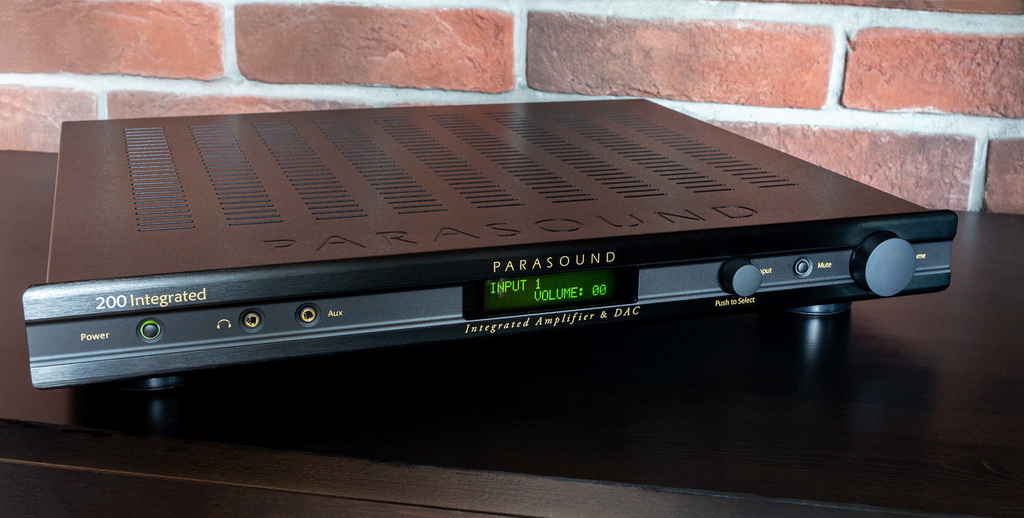 So, the design of the other three Parasound families is associated more with professional technology: solid chassis with absolutely rectangular contours and laconic in design, but functionally thought out front panels. Again, it is among the pros that the minimum module height is especially appreciated – it allows you to fit the maximum amount of equipment in a rack. By the way, most devices, including our subject, also have corners for rack mounting in the kit.

On the other hand, “professional” does not mean “faceless” or “soulless”. Like most of its siblings, the 200 Integrated is a thick aluminum plate. Its embossed blued surface is decorated with golden text elements, and this is a rare occasion when gilding looks really harmonious. But the plastic controls, frankly, both look and feel rather rustic. But there’s nothing you can do about it – there are no junior models without compromises. But the top cover is stamped from a rather thick and rigid steel sheet and decorated with a huge, but discreet logo, pressed almost across the entire width of the device. Incidentally, with a thickness of only 4.4 cm (excluding legs), the case is 438 mm wide and 375 mm deep. To be honest, I really liked this black plane, but it’s better to think over its disposition in the home system in advance. In any case, it also has a practical advantage – extremely efficient heat dissipation, and after all, the power consumption of the 200 Integrated can reach 300 W, and this is on a pulse amplification with a power of 110 W per channel.

Today you won’t surprise anyone with a built-in DAC in an integrated amplifier, but for our hero this is just one of the items in an extensive list of bonus chips. In addition to the digital inputs on the rear panel, there was an “installer’s corner” (RS232, trigger ports and an external IR sensor), as well as a phono stage for MM / MC cartridges. However, the most interesting thing is as many as two crossovers that help to organize efficient trifonics without problems and extra costs. One of them allows you to send a signal from 80 Hz and below to any active acoustics (for example, a subwoofer without a crossover), and the second cuts off the low-frequency component at the preamplifier output with an adjustable threshold of 20–140 Hz. For those wishing to use their own bass machine crossover, there is also a full-range subwoofer output. By the way, Parasound proposes to use it as an alternative for monophonic sounding of a small additional area such as a corridor or a bathroom.

The opposite scenario is also possible, that is, the signal is fed directly to the output stages, bypassing the preamplification section – a classic option for the correct sounding of the front channels of a home theater. Perhaps the only thing missing on the rear panel is Bluetooth antennas, since the device does not support wireless interfaces in principle. Someone will find it inconvenient, while others, on the contrary, will be delighted with the absence of an unnecessary source of interference, this is a matter of taste. The power amplifier in 200 Integrated is based on Pascal pulse modules. The amplifying units of this well-known Danish developer are highly respected by the creators of professional active acoustics and serious audiophile brands. For example, in addition to Parasound, they are used by Mytek and Focal.

As for the DAC, its heart is a 24-bit dual-channel Burr-Brown PCM1798 chip. The converter, as they say, is well-known and proven. A lot of equipment has been built on it, and in some cases the developers replaced its built-in digital filters with an external DSP. But in our case, the chip seems to work without outside help.

Interestingly, the PCM1798 itself can handle DSD streams, but the 200 Integrated’s USB input only accepts PCM. Moreover, the sampling rate on it is limited to 96 kHz, while on the optical and coaxial ports it can reach 192 kHz. The owners of the Parasound P5 amplifier (at one time we also tested it), of course, guessed that the 200 Integrated digital path was inherited from this particular device, which belongs to the flagship HALO series. Now, however, he was replaced by the P6, armed with ES9018K2M converters from ESS – such is the family continuity.

By the way, a crossover with an adjustable cutoff frequency, our hero also probably borrowed from this older friend – at least, their characteristics and external design are the same. For testing, I used large enough three-way DALI Ikon 2 Mk2 bookshelf speakers, which was somewhat provocative. Their ribbon tweeters could easily have brought out that harsh discreteness, because of which many still look with caution at the class D powermen. But, as they say, they could, but they could not. Sound surprisingly turned out to be quite soft, monolithic and absolutely harmonious. Of course, no hints of “warmth” were observed in it, and it would be suspicious to feel such a thing on a fast impulse path. However, small musical nuances in the upper part of the range behaved not that modestly, but not arrogantly. Figuratively speaking, they did not in any way resemble the image on the TV with the details turned up to the maximum.

Connecting to the analog input, in turn, showed that the built-in DAC lags slightly behind the amplification in terms of microdynamics. Moreover, this moment did not depend in any way on the digital port – via USB, the sound was as collected and energetic as via S / PDIF, except that 192 kHz tracks were not available on it and the spatial characteristics did not predictably reach the bar of the reference DAC standing significantly more than the “two hundredth” with all its enviable capabilities. As for the overall dynamics of the amplifying section, 110 W of the declared power (RMS) are similar to the truth – the 200 Integrated clearly controlled the rather tight acoustics (86.5 dB / m) with a large margin, even at high volume providing clear, not blurry kicks and embossed (but rather plastic) double bass sound. At the same time, both volume and spatial structure were perfectly felt in the music scene. By the way, it’s time to mention the built-in phono stage here. With the MM-head of the Nagaoka MP-200, the sound turned out to be light and light, with an impressive resolution for its class, but, again, not too sonorous and pleasantly elastic at low frequencies.

The triphonic mode, of course, was also tested and showed excellent results: the built-in crossover does not introduce noticeable phase aberrations, and the wide range of cutoff adjustment really allows using almost any subwoofer according to the scheme with the most simplified switching.

So, let’s summarize. Parasound decided to please us with a mega-universal integral solution in an affordable (relative to the models of its other lines) price category. And in terms of sound, the experiment was clearly a success. I do not think that the average music lover will find noticeable nagging about his light, voluminous and genre-wide universal sound. Here, of course, you need to understand that for a large truly high-class acoustics and microdynamics, and energy, and spatial accuracy of our hero may be insufficient. But there is absolutely nothing criminal in this fact. Rather, attention should be focused on another aspect. A high degree of integration is very convenient, but in the case of growing audiophile demands, it can be an anchor limiting the ability to experiment with higher-level components.

But on the other hand, if you are not a fanatical audiophile who changes phono stage and acoustics every year, and not a paranoid geek listening to vinyl rips at 192 kHz, then 200 Integrated can become the real heart of your compact but powerful and multifunctional stereo system for many years to come.