Philips’ Fidelio series of elite audio equipment presents a whole family of wireless speaker systems focused on integration into a home Wi-Fi network and close work with mobile gadgets. But what if you already have a pair of high-end speakers that you are not planning to change?

For this very occasion, Philips has included the Philips Fidelio A2 wireless receiver in the Fidelio series. In fact, the digital stuffing of the Fidelio wireless speakers is concentrated in it, which is complemented by amplifiers operating in class D, and is enclosed in a separate box with an integrated power supply. To get a complete audio system, you just need to connect your existing speakers.

As with the rest of Fidelio’s wireless products, the configuration and control of the Fidelio A2 is completely concentrated in the proprietary Philips AirStudio + mobile app, available in the App Store and Google Play. The use of the system in conjunction with a smartphone or tablet computer caused even the fact that the remote control was not supplied with the receiver.

An existing computer network is used to broadcast streaming music – either in a wired Ethernet version, or wireless Wi-Fi. Such a solution not only assumes more stable operation in comparison with Bluetooth, but also allows you to organize multi-room wireless installations with centralized control from one gadget. 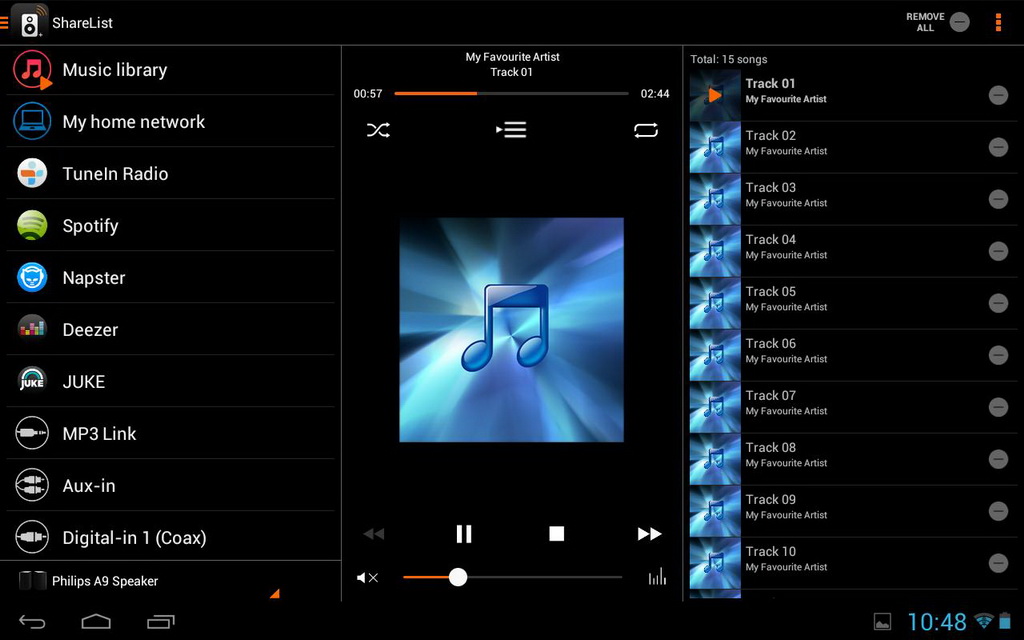 The Philips Fidelio A2 wireless receiver is compact and surprisingly lightweight. An experienced music lover, accustomed to the fact that a good amplifier must be heavy, is quite capable of being alert if a device equipped with amplifiers weighs no more than one and a half kilograms.

However, after class D amplification got rid of childhood illnesses and burst into even the top segments of audio equipment, this paradigm may be considered obsolete. Such cascades have high efficiency, which makes it possible to do without heavy-duty power supplies and huge cooling radiators, which determine the large dimensions and considerable weight of the components.

The elegant case of the model with rounded corners is made of glossy black plastic, and the top panel is finished in silver metal. Only the large knob of the volume control stands out on the facade, which is highlighted when the device is turned on. In addition, when the receiver is turned on, the LED corresponding to the currently active input lights up.

All switching is concentrated on the rear wall. In addition to the Wi-Fi antenna and Ethernet port for integrating the device into a home computer network, there are two analog inputs (a standard pair of RCA connectors and a mini-jack for connecting portable gadgets), optical and coaxial digital ports, as well as an output to an active subwoofer.

There is a small Wi-Fi Setup button next to the antenna, which switches the receiver to the wireless network setup mode. Two pairs of small but full-fledged screw terminals are intended for connecting the speakers.

To set up the system, you need to install the free Philips AirStudio + proprietary application on your smartphone or tablet computer, available on both Google Play and the App Store. It is this that is the single control center for the entire system.

With it, you can configure the receiver to work on a home computer network, broadcast music from a gadget to it, control playback of tracks from DLNA servers, select an active input and adjust the volume, and also use network services such as Internet radio. The network setup procedure is fully annotated and straightforward.

In addition to mobile devices and DLNA servers on the network, any computer or laptop can serve as a source of content for the Philips Fidelio A2, provided that it is connected to the network and has the appropriate Philips software installed. The device supports standard definition multimedia files MP3, WMA, AAC, FLAC. It’s strange that the support for the WAV format is not declared. The sound of the receiver when working with high-quality speakers surprises with its expressiveness.

The highest detail and airiness of presentation are combined here with the ability to form a large-scale scene.

The system delivers fast and firm bass that reaches impressive depths. The power reserve of the model is also quite sufficient. This is a modern implementation of Class D amplification, devoid of past childhood illnesses.