The younger brother of the flagship powerhouse Plinius Reference A-300 repeats its main features at more than half the price, providing a solid High-End system with a reliable foundation for the long term.

It is believed that Hi-Fi as a cultural and technological phenomenon began at the end of the 50s of the last century, when instead of the widespread “radio” systems made up of separate components appeared on the scene. A power amplifier in such an audio path is often called a “terminal”, although in fact the speakers close the chain, which produce sound.

Their character and quality largely depend on them, but it is the powerhouse who supplies them with energy and makes the speaker cones move with full dedication, while obeying the whimsical pattern of the musical signal. All components of a hi-fi system are important, but a power amplifier is like that “fifth element”: it is he who drives it. It can also become its axis, a reference point, and for many years, around which, in accordance with the development of technology or fashion, other components will change.

Plinius A-150 by its very appearance means that it will be possible to rely on it for many years. It is a solid 38 kg unit in an aluminum casing with a thick curved front panel and imposing radiator grilles on the sides.

Its output power of 150 W (into 8 ohms) will be enough for most speakers, and if these are some particularly demanding models, then a pair of A-150s in bridged mode will provide each of 450 watts (into 8 ohms).

In a situation where you do not need an extremely loud sound in a large room, but you want to listen to music, delving into its emotional and meaningful nuances, by pressing a button on the front panel, the amplifier can be switched to class A.

Yes, it will consume a lot of electricity and get very hot. but when properly implemented, this type of circuitry guarantees better sound in all aspects. To avoid wasting money and energy when no music is playing (idle power consumption in Class A mode is 485W), the microprocessor will switch the amplifier to Class AB mode after a configurable amount of time.

Two pairs of connectors for each of the channels allow you to implement a two-cable connection scheme for speakers.

Sound for all time

In a classic stereo system, a power amplifier is used with a preamplifier that allows you to switch between sources and adjust the volume. Today, in connection with a change in the way of storing music recordings, network players and DACs, often combined in one component, or a computer / server and DAC, equipped with their own volume control, have come to the fore.

So if a user keeps up with the times and wants to have millions of albums in his library, then he may well abandon the preamplifier (for a high-end vinyl player, it is still needed).

When testing the Plinius A-150, we used an Intel NUC8I5BEH mini-PC running the Roon OS operating system as a source with a Roon software player and a RME ADI-2 DAC FS DAC / Headphone Amplifier .

The solid and familiar floor-standing speakers Revel Performa F-52 were connected to the outputs of the amplifier. We also tried to use a preamplifier of the corresponding class, but we quickly became convinced that in our case this is an extra link.

First of all, it was interesting to compare the sound in both selectable modes. Listening to Margarita’s aria from the opera “Mephistopheles” by A. Boito from the album Verismo by A. Netrebko, we quickly became convinced of the advantages of class A – after all, we did not need exorbitant volume levels, but in terms of focusing clarity, elaboration and depth of the musical scene, sound detail, purity and HF mobility clearly benefits this mode.

Plinius A-150 paints a musical picture with large, sweeping, expressive strokes. This canvas turns out to be large-scale, colorful, voluminous.

It cannot be said that the details are poorly distinguishable in it, but they are not at the forefront of the formation of an emotional message to the listener. In the above-mentioned aria, the tragic experiences of the heroine come to the fore, and not admiring the subtle nuances of the prima donna’s vocals. 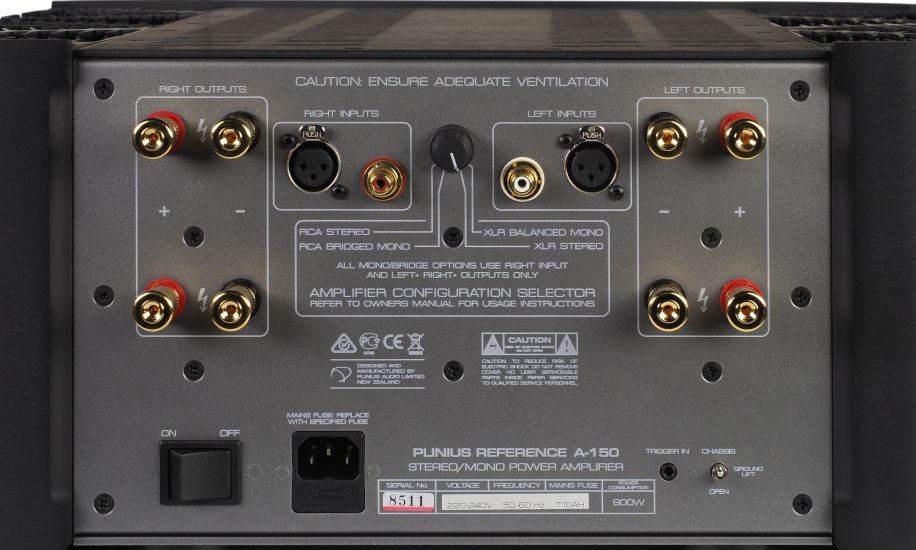 Between the input blocks is an Amplifier Configurations Selector (ACS). It can be used to select which of the inputs the preamplifier is connected to (RCA and XLR connectors are not recommended to be used simultaneously), as well as to set the bridge mode for RCA or XLR input (right). The latter option provides a fully balanced circuit from input to output.

The character of the sound from the XLR and RCA inputs is also slightly different (taking into account the difference in gain of 6 dB, which should be canceled out by adjusting the source volume). In the first case, the music scene has a great perspective, “air” is felt in it. Compositions such as Koto Song from the album Concord on a Summer Night by Dave Brubeck’s quartet clearly benefit from such a connection. The elaboration and focus of each of the instruments is better, their voices are rich in timbres and natural, both the lower octave of the piano and the subtle and gentle chimes of percussion are impressive.

And here comes the Fifth Symphony Beethoven performed by the orchestra under the direction of T. Currentzis is more impressive when the signal is fed to the unbalanced RCA input, since the dynamics becomes freer, the sound in general is faster, the attack is sharper, and it is these qualities that best affect the reliability of the transmission of the extraordinary energy of this interpretation of the great work …

After showcasing this side of the Plinius A-150’s talent, it’s no wonder his ability to present in the best possible way rock compositions of a wide variety of versions – from the Deep Purple classics to the alternative, progressive, space and symphonic band of Muse.

In Highway Star, sound rises like a solid wall, filling the entire surrounding space. There is so much drive in it that it is not at all interesting to delve into the details, but there is no chaos either – everything is strictly in place. The RCA connection comes in handy here.

With fancy, colored electronic effects things for Muse, it makes sense to experiment in terms of inputs and modes. With some of them, the best will be class A and balanced connection, with others – AB and RCA; other combinations are also possible. But any option will provide powerful, rhythmic, expressive sound with deep bass and large-scale stereo panorama.

In the lower left corner there is a power switch. The amplifier is equipped with a “soft start” circuit, but despite this, the manufacturer does not recommend flipping this switch frequently.

Plinius A-150 is an excellent power amplifier for high-end systems. Its ability to work in both class A and AB makes it especially suitable for applications where the audio path must provide both very loud sound in large spaces and more informative and sophisticated sound in other circumstances.

Some competitors of equal value outperform on the second point, but the combination of such talents in a number of applications can bring him to the first positions and the list of contenders for the role of a terminal ready to work with any acoustics.

In preparing the article, materials from https://audiomania.ru/content/art-8086.html were used. Visit article here.