The Primare I35 is a retrofit 2 x 150 W integrated amplifier based on ultra-fast power supplies that replaces the well-proven Primare I32. The amplifier is designed to provide high output power with low distortion and conveniently drive the entire audio system.

Thanks to the almost instantaneous pulse rise time in ultra-fast power supplies, natural, clear and lively sound is achieved in an extended frequency range, with good headroom. From an environmental point of view, the Primare I35 is significantly superior to traditional A / B class designs, is extremely efficient and does not generate unnecessary heat. In standby mode, the amplifier consumes only 0.2 watts.

According to Primare’s long-term strategy, if a company decides to release new components, they have not only enhanced functionality, but also an improved design with increased performance. Moreover, innovations are made with a margin of several years, so as not to change the lineup every year. Not all audio equipment manufacturers think the same way as Primare, but this policy is successful for the Swedes, and the company is not going to change it.

The new components are made in the classic Primare design – elegant cabinets with a touch of minimalism, standing on three legs. Among other features, the company notes high definition OLED displays, improved digital-to-analog converters and the presence of an RS232 service port in all models, designed to integrate the device into smart home systems. The devices also come with new remote controls, and new amplifiers are equipped with automatic active source selection circuits.

It is no secret that the main advantage of D-class amplifiers has always been the efficiency of converting power into a music signal: class A has an efficiency of 20%, class B – 50%, class AB – 75%, class D – 90-95%. Based on the high efficiency of D-class amplifiers, Primare has developed a UFPD circuit that treats all signals the same, regardless of frequency or voltage slew rate, which completely suppresses the resonance of the output filter and thereby keeps the total harmonic distortion (THD) low at all frequencies. With wide bandwidth and load impedance insensitivity, the UFPD modules are designed to work with literally any speaker with excellent control and fidelity.

Instead of splitting the gain and filtering of the signal into different parts of the circuit, UFPD combines these stages in a single module, allowing better control of the feedback loop. While maintaining gain stability, the UFPD actively adjusts the feedback gain when the device is turned on, distorted, or when the current limit is reached. Recording changes in the signal, the feedback system senses the amplifier going beyond the normal operating mode, and compensates for the signal level. This adaptive control adds a few decibels to the depth of the feedback across the entire operating range, maintaining sound reproduction regardless of the impedance variation of the speakers connected to the amplifier.

The sound of the amplifier is as transparent as possible, without coloration that is clearly audible. The device easily operates in various musical genres, featuring an enviable tonal balance and a clear articulated bass. In the middle lane, exemplary order and purity reign, the listener is given the opportunity to feel all the nuances of the phonogram. The upper range is interpreted somewhat unusual. With all the variety of microdynamic nuances, discants sometimes seem too stale, and the plume of cymbals is not long enough. The same goes for the soundstage. At low volumes, the space seems to collapse, and the images lose their scale a little. But at the middle levels and above, the stage is extremely verified, the materialization of sources is at the highest level.

While switching power supplies have a reputation for being noisy and unreliable, the theoretical benefits of a design based on them are well known. This is the control accuracy of the tires, the reduced energy consumption due to the high efficiency and the absence of current surges: energy is taken from the mains for a longer period of the sine wave. 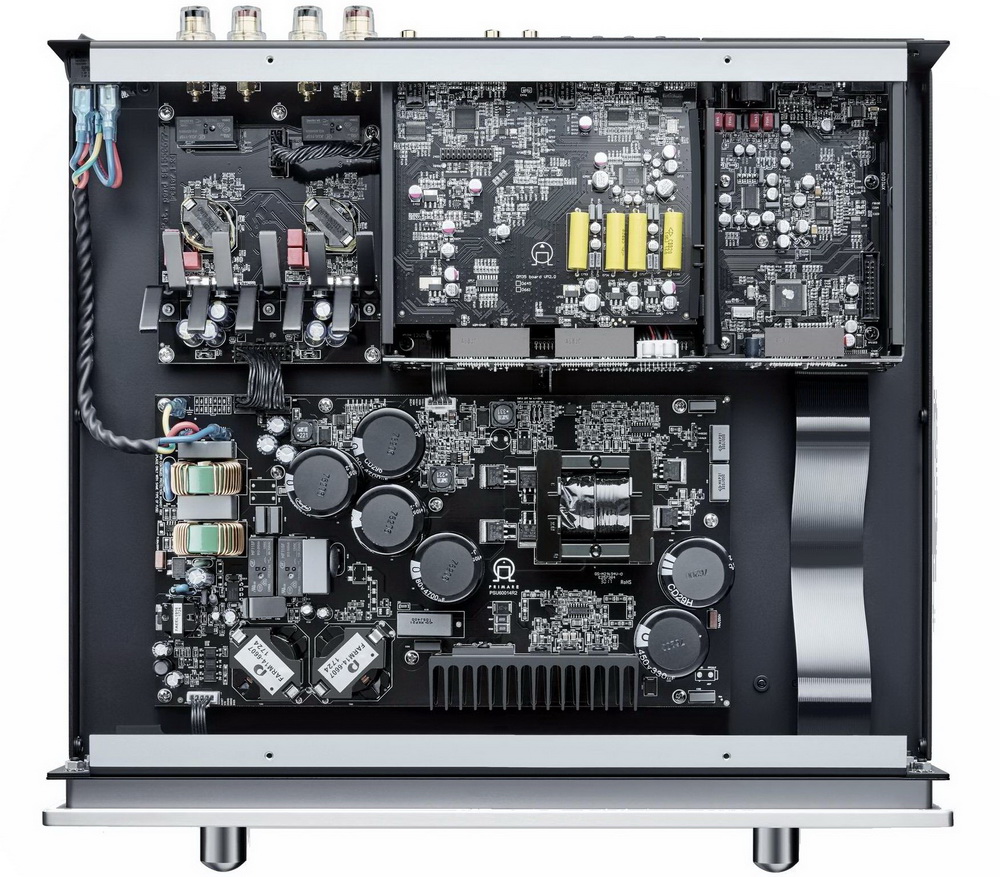 Along with the UFPD, Primare uses isolated PFC (Power Factor Control) technology in the power supply, which controls the current drawn from the mains so that it is a pure sine wave with the same frequency and phase as the mains. This means that even drawing 1000W from the mains will not affect other equipment in the room. The device becomes practically “invisible” to the mains voltage! The converter isolation stage operates in a zero-voltage shutdown mode, which results in fewer harmonics in the off-peak amplitudes, thereby reducing electromagnetic interference and providing a clean amplifier operating environment.

The USB hub serves a chipset that supports data reception with a PCM sampling rate of up to 768 kHz / 32 bit and DSD 11.2 MHz via the USB Type B input (at the A type input for flash drives and removable hard drives, however, audio files are read only up to 192 kHz ). And the conversion itself is entrusted to the AK4497, one of the most advanced and expensive chips in the Asachi Kasei line.

Primare I35 DAC (DAC board installed)

The sound of Hi-Res audio files of the highest quality (both from a computer and from a USB stick) was a real revelation. The DAC, built on the latest Japanese microcircuit, worked miracles, extracting not only all the microdynamic nuances from the recordings, but also giving them new meaning. The clarity of the main musical images and the recognition of all accompanying background components came with AK4497 to some fundamentally new order of openness and sincerity. It should be especially noted that this “addition of resolution” manifested itself in phonograms of any genre – even the most ordinary or not very well mixed recordings sounded interesting and captivating.

Prisma technology leverages the streaming capabilities of the Google Chromecast platform with audio on your home network over wired Ethernet or wirelessly over Wi-Fi and Bluetooth, allowing you to stream music from a variety of home sources and hundreds of services over the Internet. The system is controlled by the new Prisma App, which controls all hardware and software.

Streaming is the transfer of streaming media over a network from a service provider to a consumer. Streaming has become very popular due to the huge number of Internet users, the constant increase in network bandwidth and the increased performance of mobile devices. Experts believe that in the future it is this technology that will replace both optical disks and media libraries on personal drives. All information will wait for its consumer in cloud storage located on remote servers. If you look at Internet radio stations, streaming is somewhat similar to the good old terrestrial radio, but in many services the user can order certain media content at any time convenient for him. A streaming service user saves a lot of space on personal devices. Inexpensive,

Primare I35 Prisma DAC (DAC board and Prisma module installed)

Multiroom is another modern trend and an integral part of smart home technologies, which includes automation, control, and sound and video playback in different rooms (zones) of the house or even a personal plot. In each zone, you can customize your sound, playback sources, including streaming services on the Internet, set local playlists. The settings can be made individual for each user. Once upon a time, multi-room required expensive equipment and the efforts of professional system integrators to build and initially configure the system. But times are changing, interest in multiroom has led to the emergence of simple and user-friendly solutions.

But just a minute more patience. To get the full stuffing, download the Primare Prisma mobile app and activate the connection. With Android devices, this is done very quickly and easily, but there is one small feature – the application is not optimized for small smartphone screens, so it is better to install it on a tablet. With gadgets for iOS, the connection is established when the corresponding Chrome services are activated in the Google account. For those who have long been familiar with modern IT services, it is not difficult at all. And finally, the connection via Bluetooth: since this protocol was not considered as the main one (which is logical with such advanced network functions), its settings are hidden deep in the system menu.