Pro-Ject Debut Carbon Evo is a non-suspension belt drive turntable that is the newest model in the Debut range today. If, for some unknown reason, you don’t already know this, Debut turntables are some of the key turntables that the current vinyl renaissance is based on. And although today such a player is unambiguously perceived by us as the winner of all kinds of competitions, 20 years ago, when the first “Debut” from Pro-Ject appeared, the situation on the market was a little different.

Since then, Debut’s role in the Pro-Ject range has changed. This is no longer the “first step” on the way to real analog sound, but rather the second purchase of an already experienced music lover, which is decided after the first, more affordable player. So, Carbon Evo is already an “adult” turntable, and its design is very responsive to all sorts of subsequent upgrades. Anyway, being a key link in the origins of the vinyl boom is great, but today it also means having some very serious competitors. Can the new Pro-Ject Debut Carbon Evo prove its superiority once again? We’ll find out now.

The nature of the specs of turntables is such that when comparing the specs of the “first” 1998 Debut and the 2020 Debut Carbon Evo, you might ask, what is the reason for the price increase for the new model? Indeed, at first glance, the new Debut does not have such obvious improvements compared to the first version, but in fact the device has changed dramatically.

The key to this superiority is the tonearm, which is why the Carbon Evo has the word “carbon” in its name. Pro-Ject has been using carbon fiber to make its tonearms for over a decade, initially only on premium models, but now you can see it on a much more affordable unit.

In its basic design, this arm is similar to that found on the Classic Evo, and uses a thin-walled metal tube braided with carbon fiber to increase rigidity without adding weight. The cartridge holder is integrated into the overall structure to increase rigidity and stabilize resonances. This is not the first time the Debut has been fitted with a carbon arm, but it is the newest version with improved parameters.

In addition to the subjective advantages in sound quality, an important feature of this tonearm is the ability to adjust the tracking force and anti-skating over a wide range. Typically Pro-Ject limits these adjustments to its simpler arms because it increases the cost and complexity of tuning and is likely to be needed by few people. But by keeping them on the new Debut, the company seems to be hinting that this player has good upgrade potential.

However, the Pro-Ject comes standard with the Ortofon 2M Red, which is an excellent head in itself. Perhaps, 2M Red can be installed on players of a higher price (although I think that in this case the total price of the player and cartridge turned out to be the most “correct”). The Ortofon 2M Red can be easily upgraded to 2M Blue by simply replacing the needle block. 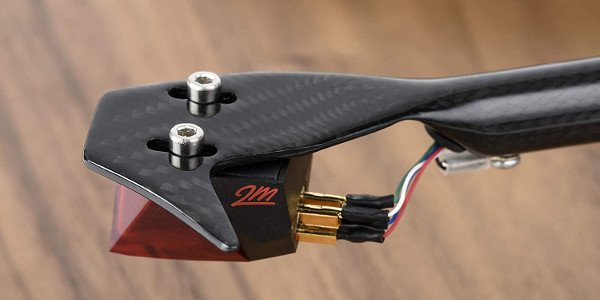 Although the player has retained its familiar appearance, it has actually changed slightly. The Debut Carbon Evo’s disc is made of steel, as in many previous versions, but now it has additional damping. It’s a thermoplastic elastomer (TPE) ring around the inner edge that damped and weighed the disc so it doesn’t ring when tapped.

The platter is mounted on a sub-disk, which is connected by a belt to the motor. This provides good vibration isolation and also makes it easier to install the belt, compared to placing it on the outside of the main disc. Overall, the disc damping is the first of a series that truly sets the Debut Carbon Evo apart from competitors of comparable value. The turntable’s motor is also mechanically decoupled from the chassis using TPE tape. The turntable is mounted on three height-adjustable feet, also damped.

Surely, many people reading this will think, “so what?” It should be understood that turntables are by their very nature very sensitive to any mechanical stress. This is one of the reasons many of the more expensive models are equipped with elaborate suspension systems to protect them from vibration. The work done by the engineers at the Debut Carbon Evo made it one of the easiest turntables I’ve tested to place. Considering that wall shelves and stand-alone stands are not often available to buyers of turntables at this price point, the new Pro-Ject will have a significant advantage over the competition.

In addition, the device is easy to use. The Debut Carbon Evo comes with electronic speed control as standard, which means there is no need to fiddle with a belt when playing 45 RPM records. However, you still have to rearrange the belt if you want a speed of 78 rpm. There is a good quality Phono interconnect cable in the box with the turntable, and it’s a snap to assemble the Pro-Ject to get started. In general, this applies to all models of the company, thanks to a well thought-out and therefore simple procedure for removing all structural elements from the box.

The new Debut became more expensive than the previous version, and many potential buyers took it very painfully. But one must understand that the price even for the same device in 1998 and 2020 will differ simply due to inflation. However, the Debut Carbon Evo is vastly superior to its predecessor. The new model has an improved tonearm, a more expensive pickup, an electronic speed switch, better damping and a very good exterior finish. In fact, the Debut Carbon Evo has become a higher class model.

At the same time, as always, Pro-Ject approached the development of a new model very competently. With all the changes in the design, outwardly it is still the same Debut, although it looks more modern and laconic than some other models of this company. Natural wood finishes, like our test unit, look good, but the colored finishes make it very trendy and modern. A dust cover is included in the box, and overall the Debut Carbon Evo meets, if not surpasses the expectations you have for a model of this value.

How was the Debut Carbon Evo tested?

The Pro-Ject turntable was housed on a Quadraspire QAVX stand, with or without the optional Quadrapsire Soundbase, and was powered by an IsoTek Evo 3 Aquarius network conditioner. The main testing was carried out through a Cyrus Phono Signature phono stage connected to a Chord Electronics CPA 2800MkII integrated amplifier with Kudos Titan 505 speakers . Additional testing was done using a system of Audiolab 6000A Play and JBL HDI1600, Rega Io integrated amplifier and Mission LX2 MkII speakers. The material for testing in all cases, of course, was vinyl.

First off, the Debut Carbon Evo is a very quiet turntable. All references to damping of structural elements of this model may seem a little intrusive, but they really bring results. For example, the T1 also has impressive resistance to external mechanical stress, but the Debut Carbon Evo is in a different league. Provided that the surface on which it is installed is level and does not vibrate much, even the most vigorous activity around it does not seem to affect the performance of this player. 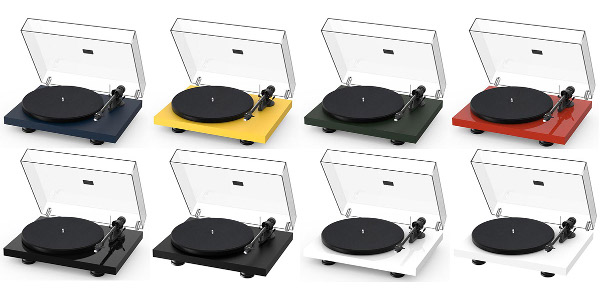 The greatest gains from better damping can be obtained in increased soundstage quality and deeper bass. In other words, Carbon Evo reproduces what is recorded on the vinyl record more efficiently. The Pro-Ject’s bass is stronger and deeper than other models of comparable value, but it is focused and precise without cluttering the rest of the frequency range. The quality of bass in an analog device depends on the skill of the engineers, and there is no other way to get it. And the Debut Carbon Evo player clearly shows what a well-designed analog device is capable of, even at a rather modest cost.

Although the Debut Carbon Evo cannot be blamed for its slowness, the music flows through it rather smoothly than it fountains, like some other turntables. This is a very attentive to detail and balanced apparatus that never loses its composure. Listening to Gregory Porter’s magnificent three-disc album All Rise on it, you will feel the scale and beauty of the musical arrangements that accompany Porter’s incredible voice.

Even from the strictest point of view, it must be admitted that the tonal balance of the Carbon Evo is really very good. The instruments sound convincing, and the singer’s voice is conveyed with all the nuances that make him truly alive. The sound picture has good spaciousness, which adds believability to it, it captivates and envelops the listener. Even with the apparently less audiophile recording of What’s it Like Over There performed by Circa Waves, the Pro-Ject does not lose confidence and composure.

This player also has the ability to upgrade. Replacing the stock cartridge Ortofon 2M Red with 2M Blue, while maintaining the general character of the Debut Carbon Evo sound, will give a little more airiness and detail at high frequencies. This is not a change you should make immediately – the sound quality of the player with 2M Red is excellent. But this, at least, testifies to the potential of this model and shows that even in such a simple way it is possible to further improve the quality of its sound in the future.

In addition, the Carbon Evo is quite susceptible to upgrades from the system in which it operates. Connected to the Rega Io and Mission LX2 MkII, it sounded very good, but the Audiolab / JBL combination also turned out to be quite “own” for the Debut Carbon Evo and it did not look like a weak link in it. Obviously, when connected to a very high end system, some of the limitations of this model make themselves felt, but Debut Carbon never sounds “cheap”. In the current turntable market, this is perhaps the most affordable model with this potential. 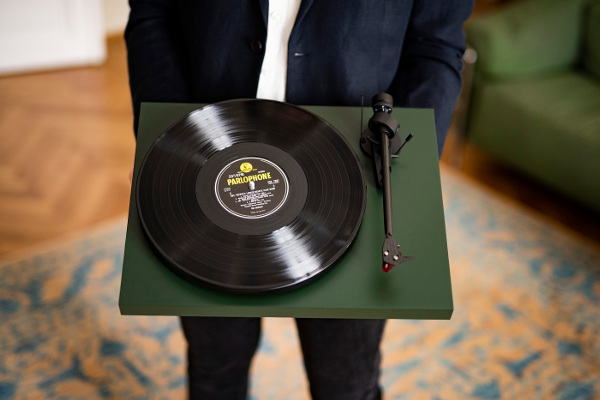 The Pro-Ject Debut Carbon Evo turntable embodies all the experience of this Austrian company. This model is very far from the original Debut in many areas, but it still retains the very essence of its design.

The turntable retains its simplicity of design and customization, but combines it with a new level of sound quality and upgradeability to match higher end models.

Advertisement
X
Subscribe to get the best Tech news and reviews of the week.
By signing up, you agree to our Privacy Notice and European users agree to the data transfer policy.
Close
01/14/2021