RME is a German company that has been developing and manufacturing digital audio equipment for professional use since 1996. DAC / Headphone Amplifier ADI-2 DAC FS is today its version of proprietary signal conversion devices that is as close as possible to the needs of a simple music lover.

The previous model RME ADI-2 Pro was nevertheless addressed to studio workers, as evidenced by the set of inputs and outputs, as well as the available analog-to-digital conversion function, which, of course, allows this unit to be used as a preamplifier, but hi-fi purists Intermediate analog-to-digital conversions are usually discouraged. By removing it from the component we tested, its creators were also able to slightly reduce the cost of the product. As a result, it turned out to be a completely formatted device,

However, to say so is to seriously sin against the truth and offend the developers. Getting acquainted with the ADI-2 DAC FS, it seems that they, being great connoisseurs of digital sound and related technologies, simply could not help but share at least part of their experience and skills with ordinary users. And love in music – the company’s website says that most of RME’s employees play certain instruments – makes them do everything to make it sound as authentic as possible.

The first of these circumstances led to the presence of many parameters and functions in the DAC that need to be tuned, and the second – to a manic struggle (you can call it differently) for the signal-to-noise ratio, channel separation, reducing the THD, etc., that is, for the ideal possible characteristics of the audio component today. The device is powered from the supplied adapter. An external battery can also be used.

Small – less than a notebook sheet at the base – the RME ADI-2 DAC FS looks pretty, but not sophisticated: its front panel has a lot of buttons, knobs and connectors. There is also a small color display to help you navigate its countless settings.

The control system cannot be called simple, however, having at hand a sensible user manual (in English and German) and tinkering with it, after a short time you delve into the logic of its authors. Fortunately, the factory settings are such that you can start listening right away and the sound quality will be high, and the included remote control makes basic DAC control intuitive for most of those more or less in the subject.

The component accepts digital streams through an asynchronous USB port and two SPDIF inputs – optical (with support for ADAT – greetings from professionals) and coaxial. It outputs analog signals to balanced XLR and unbalanced RCA outputs, as well as to two headphone jacks with their own amplification circuits.

In order to better match the connected devices, for example, powered speakers or an amplifier, one of four output signal levels can be set for the line outputs via the menu.

For the 6.3mm headphone output, it is suggested to select the Hi-Power option if the connected model has a high input impedance. At the same time, the Extreme Power amplifier block serving this connector protects the headphones from excessive overloads that can lead to destruction, in particular, a special relay disconnects the signal if a DC component is detected in it. It is endowed with other functions inherent in “large” power amplifiers, as well as equipped with a sensor that instructs the sound processor to smooth and stretch the increase in volume over time so that the listener can react to its too high level.

The second headphone output, 3.5 mm, called IEM (In Ear Monitors), is designed to connect modern, highly sensitive earbuds with minimal impedance. The amplifier operating on this output has practically zero output impedance and a record low level of intrinsic noise.

Through the menu, you can configure the automatic disconnection of the line outputs if the device is used with headphones.

The built-in DSP allows you to change the frequency response of the device (adjust the timbres, perform five-band equalization, turn on loudness), use the Crossfeed function, which makes the acoustic space formed by the headphones look like a speaker soundstage, change the signal polarity, make it from mono stereo and vice versa. This DAC also allows recording the signal to the SPDIF inputs via the USB port.

Fully balanced RME architecture, the ADI-2 DAC FS is based on the AKM AK4493 D / A conversion chip. The original circuitry, developed by the company’s engineers, allows you to fully realize all the characteristics of this chip: support for sampling up to 32-bit / 786 kHz for PCM and DSD up to DSD256, as well as providing amazing figures for noise level of -123 dBA, THD of -120 dB and THD + noise at -116 dB. The six digital filters provided in it are made available to the user through the menu.

The device is equipped with a gate array that allows software updates and add functions. 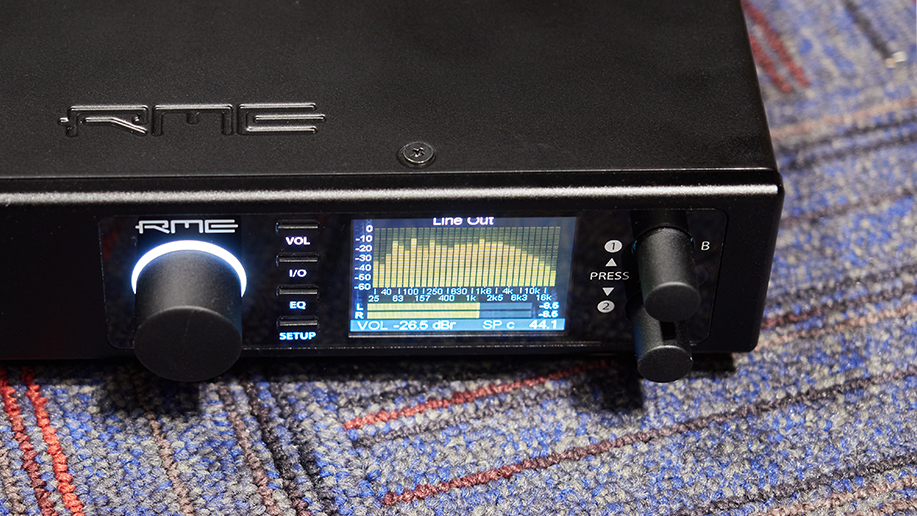 The display allows you to make settings, and also displays information about them and the parameters of the processed digital stream. It can also show the instantaneous spectrum of the audio signal.

Excellent sound in a solid system

This RME DAC can be used as part of a solid hi-fi system, and paired with a PC as an external sound card. In particular, he did not give up on such solid components as the Plinius Hiato amplifier when connected to its XLR connectors and the Revel Performa F-52 floorstanding speakers. The source of digital content in this case was the Aurender A100 network player , equipped with a USB port through which a digital stream is output, and software that complies with the USB Audio Class 2.0 specification.

The sound is balanced, rich in timbre and energetic. But I would especially like to note the excellent separation of all melodic lines and the holographic bulge of focused musical images. This is not just detail, but its, so to speak, the next version. At the same time, the feed is solid, without gaps and inconsistencies. In compositions of any complexity, each element takes its place and organically complements the others.

In “The Four Seasons” as interpreted by Max Richter (Recomposed by Max Richter. Vivaldi. The Four Seasons) in MQA format from Tidal, acoustic instruments and electronic effects coexist in perfect harmony. The solo violin sounds natural and emotional: sometimes it is soulful and melodic, sometimes it is harsh and capricious. The tops, when required, are very delicate and light, filled with subtle nuances. The bass line is clear and deep; in the Summer 3 finale, it appears somewhere in the back of the stage, its low-frequency pulsations become louder and clearer and at the end of the track they displace Vivaldi’s melodies, creating an alarming and depressing mood.

All the measures taken by the RME ADI-2 DAC FS developers to combat noise and distortions bear ripe fruit when playing Margarita’s aria from A. Boito’s “Mephistopheles” performed by A. Netrebko from the Verismo album (also with Tidal in MQA). This recording has a huge dynamic range, starting with a barely audible bass intro and reaching the height of loudness in the singer’s coloratura ups. You can hear everything down to the smallest detail in both cases; the stage remains stable, the instruments and vocals are sharply focused, and the system’s ability to capture subtle variations in dynamics makes the delivery extremely expressive.

Real Hi-Res files from a hard drive connected to the Aurender A100 play just as well. The remastered album Machine Head by Deep Purple in 24/96 format demonstrates enviable drive and agility, giving the listener of Highway Star the feeling of a car rushing at great speed. And at the same time, well-known songs appear authentic, without a touch of modern accents.

The sound of the album Clap Hands, Here comes Charlie! Ella Fitzgerald (24/96). The “vinyl” noise inherent in it is precisely dosed – it creates a “scent”, but does not irritate – and the singer’s voice is fluid, smooth, natural and very pleasant.

We have already noted more than once the insidiousness of digital streams: it would seem how you can spoil a sequence of pulses, but in reality they require even more delicate handling than, say, a signal from a vinyl turntable, in order to demonstrate that modern audio is still not only convenient , but also qualitatively in terms of sound.

Having installed the necessary driver on a laptop under Windows 10 and using the popular Foobar2000 software player, we continued testing the ADI-2 DAC FS – and we were quite upset. The magical charm of the sound of our system has disappeared. In general, everything went well, but we already knew how it could be. When using a computer as a content source, you should always keep in mind that the operating system makes changes to the original digital data when it is prepared for output via the USB port. How to deal with this is described, for example, here . However, you can also use other software players and make the necessary settings in them. With JRiver, for example, the sound is much better. The small remote control allows you to quickly change the most important settings without having to navigate the extensive menu.

Sound for every taste

Many music lovers will choose to use this RME unit as a desktop component with a computer and headphones or powered speakers. I must say that it is very favorable to this: it is pleasant to have it at hand and “indulge” in the process of listening with numerous settings, or just contemplate the spectrogram of the performed composition.

Our companions at this stage of testing were the full-size models Oppo PM-3 and Neumann NDH 20 . Both of them demonstrated better, in particular, more dynamic sounding in Hi-Power mode, despite the low impedance of the former (26 Ohm). For the second, with its indicator of 150 ohms, it is absolutely required.

With the Oppo PM-3, this DAC / headphone amplifier delivers balanced, detailed, rich sound. The “Rotten Dance of Koschei” from Stravinsky’s ballet suite “The Firebird” in 24/192 format is performed wonderfully: with varied and recognizable instrument voices, whimsical but clear rhythm, swift attack, expressive dynamic take-offs, powerful drum beats, light and ringing percussion … At the same time, there are no digital artifacts, the music flows in a continuous stream, together – if I can say so about this work. The acoustic space is large, lively, filled with air, the images are precisely focused.

The Crossfeed feature did not make much of an impression, and digital filters do not greatly affect the sound, but each one is worth a try – each user has a different taste.

RME ADI-2 DAC FS can work with DSD streams in such representations as DSD over PCM (DoP) and Native. In both cases, DSD-encoded data is delivered to the input of the AKM AK4493 DAC chip in its original form without intermediate conversion to PCM, and all DSP effects are disabled.

The digital volume control built into the AK4493 (like all other modern DAC chips) can only work with PCM, so the DSD stream is automatically converted to it by the chip itself. For those users who would like to exclude this “unnecessary” conversion, the developers recommend activating the DSD Direct mode in the settings. In this case, the volume control is disabled, as well as the headphone outputs, and the analog signal is sent only to the line outputs.

Nevertheless, the Jazz At The Pawnshop album in DSD128 and converted to PCM with a sampling rate of 176.4 kHz when listening to headphones sounds great – with the special fluidity inherent in this one-bit format. Perhaps, in this, and in a much higher price segment, the RME ADI-2 DAC FS has no competitors either in terms of equipment or sound quality. Perhaps its cost is due to the period of entry into a new market for the company, so fans of digital audio looking for a DAC / headphone amplifier should hurry up with the purchase.