RME is an abbreviation that evokes associations with reliability for everyone who is even slightly involved in working with sound. The company has become famous for its audio interfaces , taking pride of place in the market as a brand that produces trouble-free equipment.

I got their hands on their DAC with the ADI-2 DAC FS amplifier  , which made more than one audiophile who did not reckon with the professional segment bite their elbows, as well as the unique Babyface PRO FS interface  , which won the trust of professionals for its reliability, quality and sound level.

Packaging without frills and gloss – everything corresponds to a professional orientation, in which boxes of stewed oak and an abundance of accessories are not welcome.

In the RME ADI-2 DAC FS box  , under a cardboard cover with printing, in addition to the DAC itself, you will find:

And here  it is worth going through each item of the  Babyface separately. The transport case is solid and will be able to protect not only from pressure, but, perhaps, from falling from a height of human growth. But it has one drawback, which is at the same time a plus – these are latches that cannot be opened without tearing off the floor of your finger. On the one hand, this gives additional points to the reliability piggy bank, but on the other hand, ergonomics could have been thought out better, since with frequent transportation, the latches will quickly lose their original appearance and, possibly, functional appearance. You will be opening them exclusively with foreign objects, and this does not have a very good effect on plastic. At the same time, few manufacturers provide their interfaces with such cases at all, so this is a minor minus.

The L-shaped cable also has two ends. One of which is a minus of conditional proprietary, and the other is a fattening plus, since such a connection is much more convenient than a direct one and, which is important in a professional recording environment, the cable is recessed into the case, preventing it from accidentally jumping out or loosening the USB socket.

And, in my opinion, an extremely positive decision is the use of an adapter for MIDI. This interface is gradually disappearing into history, more and more giving way to the usual USB, so the rejection of a rather large input, significantly increasing the body, but demanded by a fewer and fewer users, is an excellent solution. At the same time, the manufacturer does not deprive you of the opportunity to connect your working tools as you like, which cannot but arouse sympathy. Before you plug the  RME ADI-2 DAC FS  into a power outlet, you are already starting to have fun. Naturally, only if you are an adherent of studio minimalism, because the device is not replete with details and visual chips. The austere black box beckons with just a few elements: a small color display and an indicator light around the power button. The indicator lights up in only two colors: red if the device is turned off, but connected to the mains and white if the DAC is working. The main feature is the display, or rather what it shows.

The front panel contains, in addition to the screen and the power button, a volume control, pressed controls that serve as navigation in the device menu, and two headphone outputs, for which a special thank you. Most manufacturers do not bother with such things, but  RME  knows that adapters spoil the sound and that low-impedance in-channels need to supply less current than full-size studio headphones that come with a 6.3 jack. For some, this may seem like an insignificant trifle, but for me personally, as an owner of several pairs of monitors, this is a very important parameter. Not all models of headphones are sensitive to connection via an adapter, but I think it is obvious to everyone that it is better to listen to music without it, albeit with very high quality. The  RME Babyface PRO FS  with ergonomics and design has about the same story – everything is assembled and fitted perfectly, the interface housing is machined from aluminum. The volume control is smooth, there are two separate inputs for full-size and in-channel. Two instrument inputs, two XLR mic inputs, monitor outputs, USB-B, MIDI, auxiliary power, Kensington lock and best of all, ADAT for upscaling recording channels. All users’ wishes are taken into account, so you won’t want anything more.

The indication of the levels of the incoming and outgoing signals is made in the form of strips, divided into separate segments, which makes it extremely visual and aesthetic. Also on the bottom of the case is a +19 and +4 dB switch, which adds a direct way to reduce the output level to avoid overdriving. 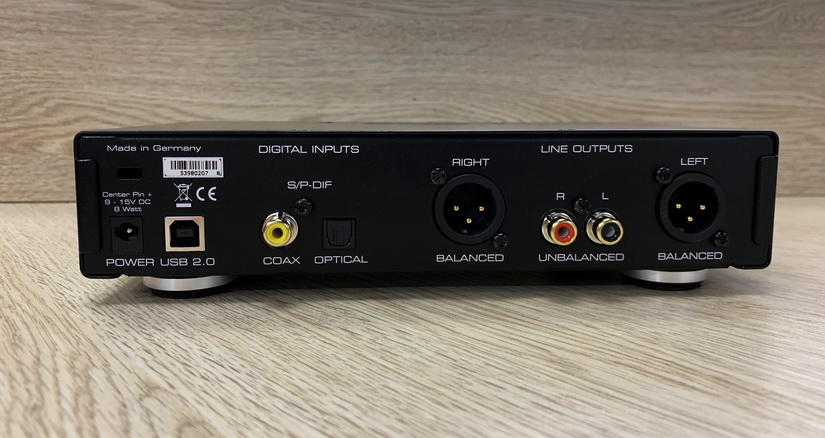 The ergonomics of the  RME ADI-2 DAC FS are  not up to par, since all control is carried out through 2 knobs with the ability to press, but if you get used to it, it ceases to seem a problem as soon as you master the control and understand that your DAC is crammed with such features that you are talking about. and did not think, superficially evaluating the device. Frequency control, equalization, balance, fine tuning for DSD files and the most chic – the legendary crossfeed. I have long wanted to try this feature, and specifically from the very day I heard about the SPL Phonitor headphone  amplifiers,  from an equally legendary brand. One of the main features of their devices is the ability to cross-feed the signal to the headphone channels, simulating listening to music from stationary acoustics.

The point of such tricks is to be able to listen to the recording as it would sound in listening conditions not in headphones, but from full-length acoustics, partially mixing signals from the left and right channels. It would seem, why this might be needed, if the overwhelming majority of manufacturers focus on “physical channel separation”, releasing devices with balanced connections. Who would think to go in the opposite direction and pollute the canals?

The fact is that when you listen to music from the speakers, the sound from the right channel does not go in isolation to the right ear, but partially also enters the left ear, and vice versa. In the headphones, we hear only one channel, without the addition of another. This is a very controversial, but interesting technology, revered by sound engineers as the most portable, albeit incomplete, option for mixing recordings.

And, as it turned out, for consumer use this function is not needed for nothing. You will definitely hear the difference when switching between crossfeed and normal listening, but this is not a feature that enhances the sound, making it richer, livelier or, conversely, dry. So, from the point of view of a simple user who does not work with sound, this is a useless thing, but from the point of view of a professional who knows where and how he will use it, it is quite a weighty reason to pay extra for its presence. However, a similar function was implemented in the Crosszone CZ-1 headphones . But what distinguishes an expensive audio interface from a cheap one? That’s right, the name of the manufacturer. But in fact, no, an expensive manufacturer will put high-quality DACs, amplifiers, boards into its interface and back it all up with software, without which modern devices are not worth a damn. In  RME  has its own program  TotalMix the FX , which runs on top of your DAW and manages the basic interface parameters, while being a driver that fully discloses all the features of  RME Babyface the PRO FS .

Both devices sound amazing, no exaggeration. These are perhaps some of the most detailed and monitor-sounding DACs on the market, in their price segments. The only difference is that the  RME Babyface PRO FS  is an audio interface for sound recording and playback, while the  ADI-2 DAC FS is  intended solely for listening.

Babyface  , due to its versatility, is more suitable for work, but this does not mean that it cannot be used as an amazingly informative source. I myself would prefer it, given that I sometimes dabble in sound recording and practically do not listen to music at home on full-size systems, preferring headphones.

But if you own something more serious than mid-range studio monitors – your choice is the  ADI-2 DAC FS. The older model has a much higher amplification path and copes much better with Hi-Fi speaker systems that require this amplification. And in terms of ergonomics, the  ADI-2 is  much more suitable for the role of the center of a stationary audio system, which is hinted at by the control panel that comes with the kit. It produces a more detailed sound picture, despite the already extremely high information  content of the Babyface .

If you, like me, prefer listening with headphones,  Babyface  will be a more practical option due to its lower cost. The headphone outputs produce a similar sound, so in this case the  ADI-2 is  no better than the initial model from  RME . DACs are as versatile as possible and unleash the potential of everything you connect to them, acting as a reference sound source by which you can compare the quality of certain components of your audio system. There were no problems with any of the headphones and the  RME Babyface PRO FS  squeezed everything, both from the reinforcing in- ducts  and from the extremely demanding full-size  Audeze and  Sennheiser .

Stunning detail and clarity of sound, no distortion and reliability – this is how RME can be described  ,  without undue modesty. Versatile devices with different directions, suitable both for the role of home sources and as solutions for working with sound.

You just have to listen to them, fall in love and decide how you will use them. RME did the rest for you.