Rotel A11 Review • Almost perfect in every way! 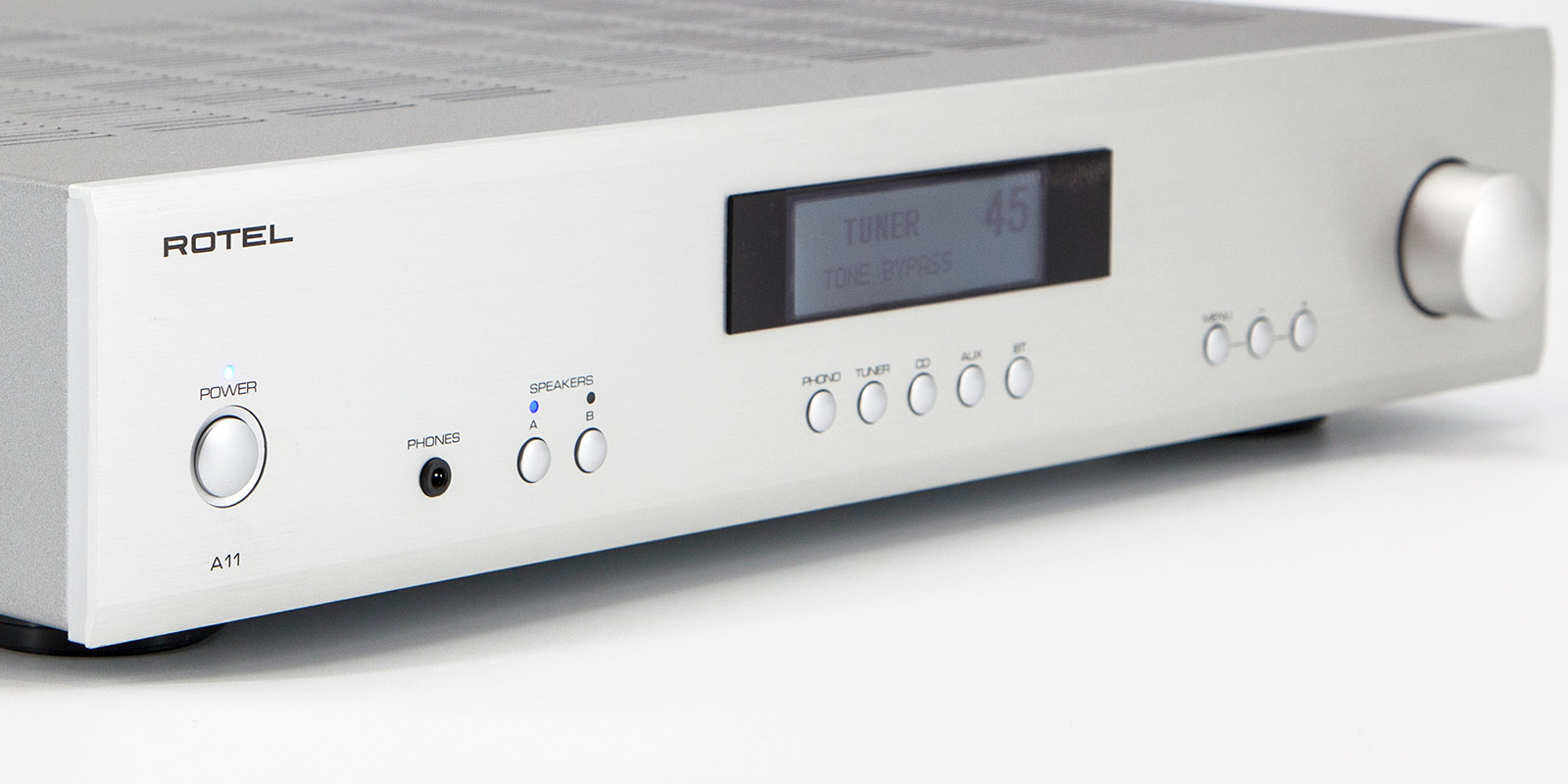 The Rotel A11 retains the Bluetooth, phono stage, display and basic architecture of the A12, but reduces power and eliminates the classic digital inputs to bridge the gap between the introductory A10 and the larger models.

Rotel is already in the seventh decade of its history and in recent years seems to be on the rise. With the affordable amplifiers of the “A” series, it substantially renewed its profile, modernizing the appearance in relation to the more classic “RA”

The company maintains its timeless hi-fi character, producing CDplayer and receivers, sets of preamplifiers and end amplifiers as well as multichannel amplifiers. Along with the “attack” in the financial category, which is currently being completed with the presentation of the A11 / CD11 pair, Rotel has in the works the new Michi, the successor of the legendary high-end series of nineties.

With a maximum power of more than 1KW from the Michi monoblock, the big models of the “sister” B&W (with common facilities in Zhuhai, China since 2006) will definitely get enough driving! But let’s stay at the humblest levels of “A” amplifiers to deal with the very interesting addition of the integrated A11.

This fills the gap between the A12 of the thousandth and the A10 of the five hundredth and is placed in the most popular subcategory of integrated, where the first very good proposals of the most consuming Japanese manufacturers are crowded.

The A11 is of course a little more expensive e.g. from the Denon 800NE, the Pioneer A40AE and the Yamaha A-S701 and even comes without the classic digital inputs of those, but has in turn the reputation of very careful sound quality, especially for European ears, that accompanies the historic Japanese company for decades, thanks to its close partnership with B&W and the UK market.

It does not take more than five minutes to realize that the A11 really differs from the classic neutral sound standards of the aforementioned, having a character extremely sculpted to give musical enjoyment without doing “its own thing”.

It is not necessarily more accurate but rather more apt as musicality, more sophisticated, rendering the atmosphere very comfortably and, most importantly, without ever drawing attention to ephemeral impressions.

A key element of Rotel’s philosophy is the Balanced Design Concept, according to which the quality of materials, circuits and subjective sound quality are in harmony with each other and nothing “stands out” to the detriment of other parameters, including cost.

In other words, for Rotel the “perfect in every way” applies. Let’s see how this translates into the build quality and performance of the new A11.

The A11 shares the presentation with the A12 and A14, with the large display and the characteristic “breaks” on the top and bottom of the aluminum front, which reminded us of the premium devices of Musical Fidelity.

Its style is indeed something between classic Japanese and British and it extends both to the interior construction and, as mentioned above, to its sound. The perceived build quality is very good, there is precision in the assembly, excellent finish and solidity. The brightness of the screen is adjustable, as is that of the LED indicators.

The selections are made with a relay and all the settings are made electronically, from the level, the tonality settings to the selection of the inputs for bypass. Even Bluetooth input can be passed without setting, if we do it from the source, so as not to reduce the quality. There are two pairs of speakers, channel balance and automation for shutdown after hibernation and “wake up” in the presence of a signal.

Everything is done from the menu, easily and quickly and we can turn off the automation. There is a main on / off switch on the front and a standby function from the remote control.

Inside, we see an interior with order and attention, dominated by the large custom transformer (presses on a damping sheet) and Rubycon electrolytic smoothing capacitors (2 × 6800μF), very close to the complete rectifier bridge.

The circuit is minimalist, includes some integrated (phono stage, pre-amplification) but most are implemented with separate components and at the output we find a pair of bipolar transistors Sanken C4498 / A1695. The digital part around the Bluetooth aptX delivers the streams amazingly, with serious resolution, bodies and transparency.

Occupies its own board with Burr Brown DAC (PCM5102) and enjoys independent power supply, to reduce interference.

The A11 was found in its element with the KEF R11 but did not say no to other floor-standing speakers, such as the Triangle Borea BR08. It is generally good with speakers, it drives them safely even if their resistances sink to 3Ω, but it inevitably appreciates the higher sensitivity that increases its dynamic margins. 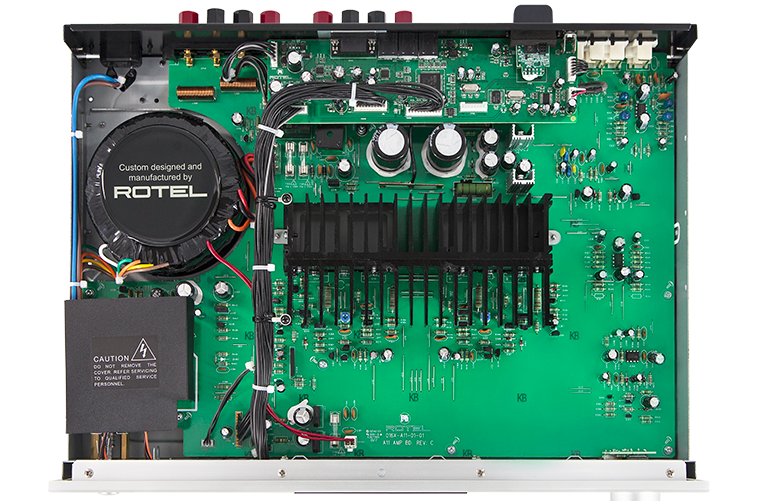 We can say that it imposes the sound of the independent speaker and that it is not “forced” when the speaker is very revealing, a sample of a charismatic design in power supply and feedback loop. The sharpness of the middle area, the quietness and smoothness in the transitions, the tonal coherence, the homogeneity in the dynamic contrasts and the full bodies are the main weapons of the A11.

Its image is very focused with excellent focus, perhaps relatively close in width and depth, with the height highly dependent on the dispersion of the speaker. In other words, he does not sacrifice clarity in order to achieve larger dimensions and “spread” of the scene and the close action, with the big idols without projections, justifies him.

Tonic is almost ruler flat, perhaps with an invisible emphasis on both ends, achieving a full deep low and very good sharpness high. It flows very steadily, without a dramatic capture of the attack and the speed but also without “sitting”, as a result of which it presents the rhythm very “humanly”, easily perceived by our ears and body.

This does not mean that he is always “civilized”, as dynamic outbursts and moments with more intense action are rendered with due energy and speed. It just lacks the mechanics and never seems to be in a hurry or forced.

The low level resolution is in any case top for its price, even when the details coexist with intense peaks, so the result is at the same time rich and elegant, in an extremely balanced way, without favoring any end of the dynamic scale.

Well done to Rotel for implementing a high end character even at these price levels and, if you get the power of the A11, you can really sleep in peace with this amplifier in your rack.

Audio Technica to launch AT BHA100 and DAC100 as a duo