Rotel’s flagship A14 amplifier has the highest power and most feature richness in the series. The Rotel A14 delivers 80 watts per 8 ohm RMS channel with two channels running. But dry numbers do not reflect the real possibilities of its use. The power supply is equipped with a proprietary toroidal transformer and slit-foil capacitors. This design makes it possible to effortlessly cope with severe loads and dynamic peaks when transmitting an amplified signal. Carefully selected elements are used in the contours of the model, ensuring a minimum of distortion.

The Rotel A14 is equipped with a state-of-the-art AKM digital-to-analog converter (32 bit / 768 kHz) and supports PCM formats up to 32 bit / 384 kHz and DSD64 / 128 via a USB computer input (PC-USB). LPCM reception up to 24 bit / 192 kHz is available via S / PDIF connectors. The device is equipped with a remote control, and as an alternative, you can use a proprietary application for iOS or Android devices.

The design of the model is notable for its neatness and clean lines. In the center of the aluminum front is an LCD display and 9 source selector buttons. The left side is occupied by a power button with LED diode, USB with support for Apple devices, a mini-jack for headphones and buttons for selecting speaker sets. The volume knob and keys for working with the menu are moved to the right (setting the timbres, balance, disabling the timbre block, etc.).

There is a full set of inputs: five analog RCA, incl. MM phono connectors, two coaxial and two optical, PC-USB for PC or Mac (2 modes are available: normal and asynchronous). There is a Pre Out and a USB port that only charges and powers portable devices. There is a LAN port for integration into a local network in order to realize the possibility of IP-address management and software updates. Trigger outputs, system bus connectors, IR input and RS-232 interface are provided.

It is now difficult to surprise someone with a built-in DAC: such solutions are found both in the budget and in the expensive segments. Even renowned high-end manufacturers build in a DAC or offer an optional module. To be honest, I get the impression that DACs will soon be found in amplifiers as often as built-in phono stages in the past. Those. in the basic version this module will be present almost always, and only very expensive devices will have separate functions. But this is more of a theory, but what do we have in practice in this particular case? Rotel has always been relatively comfortable in the budget segment, which includes our subject. Yes, this is the oldest amplifier in the line, but the line itself is the youngest in the manufacturer’s catalog. Small in size, but weighty, outwardly, it is definitely identified as Rotel, if you have ever seen the company’s products from previous years. Externally, the corporate identity is clearly maintained, and this is a familiar, classic amplifier. The power button on the left, there is also a headphone jack and a well-known switch from the past for selecting pairs of speaker systems. Display and input switching in the center, on the right – volume control.

The controls themselves are very clear: this is not the case when a couple of buttons and some cunning menu are responsible for all the settings. In addition, the controls are supplemented with a classic remote control. The amplifier’s functionality is quite rich: line inputs, an MM phono preamp, and there are plenty of digital inputs – coaxial and optics, USB for connecting to a computer and USB on the front panel for iOS devices, in addition, wireless Bluetooth connection with aptX support. In addition to working directly with different sources, there are a lot of additional settings, ranging from the timer, which turns on the standby mode, to the volume parameters for various inputs. Here you don’t have to go into all the nuances, but only focus on 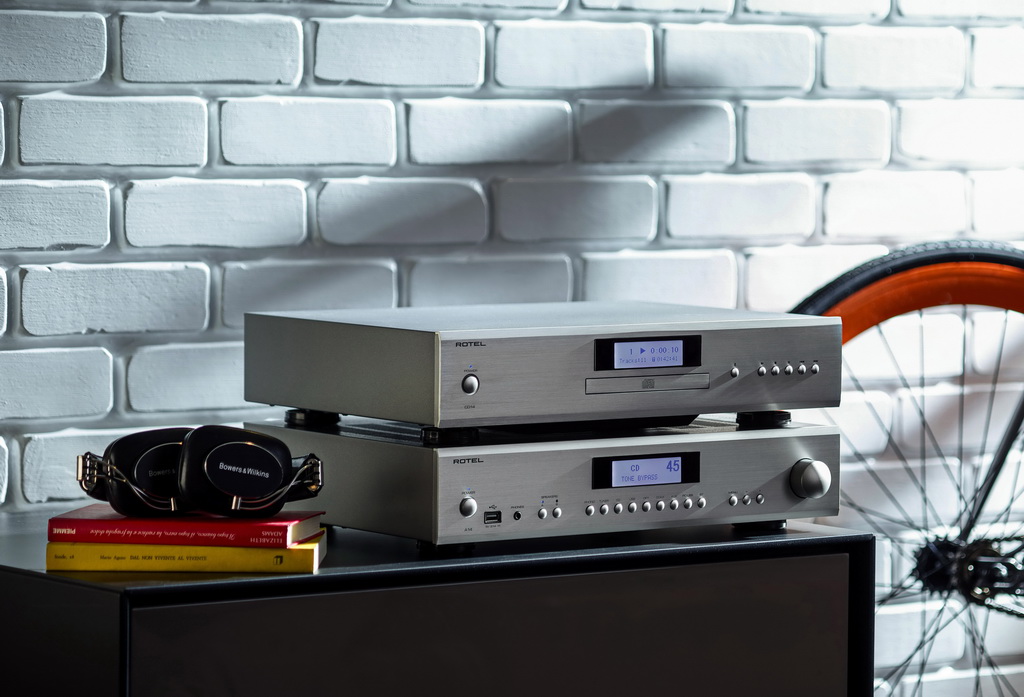 Based on the description, it is already easy to imagine the rear panel, which is densely filled with inputs (albeit only unbalanced) and additional interfaces: output from the preamplifier, output to the second pair of acoustics, control switching, including triggers and RS232, LAN connector and additional USB exclusively for charging connected devices. There is a lot, isn’t it? Yes, but in this case it is not only convenient, but also the ability to use the device to work with a large number of different devices. As I wrote above, if the division of functionality is welcomed in the High End, the more the better for the mid-budget “combine”. 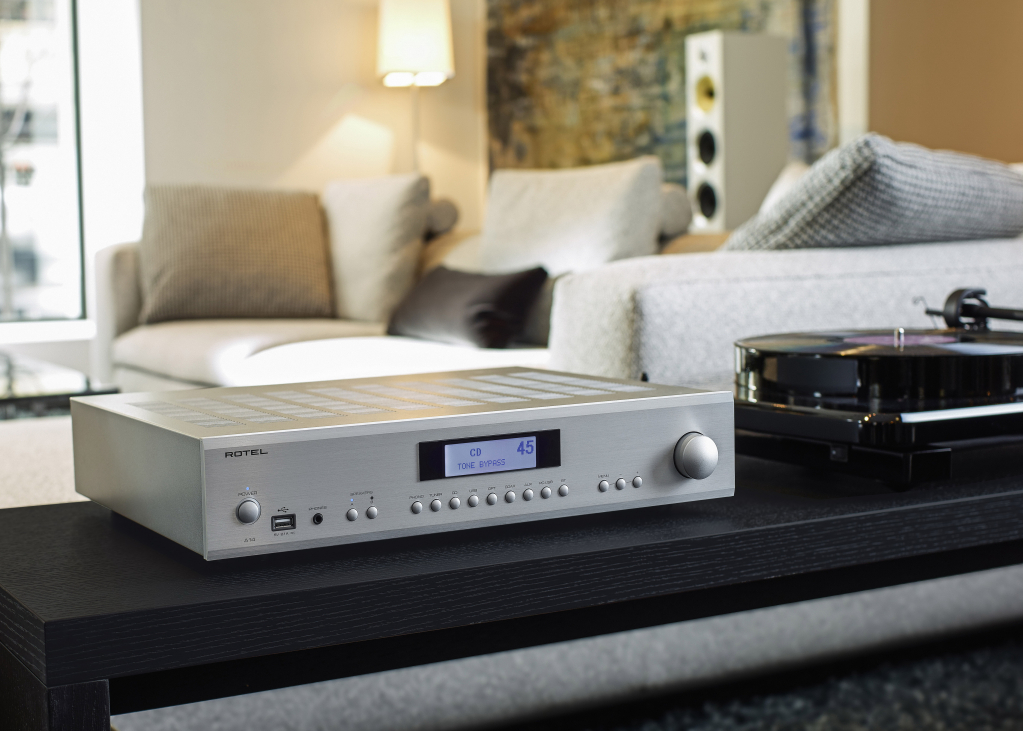 Although in terms of “bigger and better” there are certain questions to the device. For example, the network connection is only cable, there is no Wi-Fi. This connection can only be used for service needs, such as updating the firmware or managing – this connection does not support any streaming functions (however, high-quality streaming in this price category is an incredible thing, apparently, that’s why it was not implemented). However, if you want to use the Rotel Remote app (available for iOS and Android), you will have to connect the wire too. Note that for my taste the application is quite primitive, and the iOS version slowed down noticeably. I don’t know how it works on Android, but I wouldn’t count on simple controls. I hope the company will finalize and update it, and we will get another convenient way to work with Rotel equipment, but for now, Now it’s time to look under the cover of the device. Outwardly, everything looks decent. The assembly is neat, the construction is confidently sound. There are no expensive audiophile components, of course, but who would look for them here? But there is a classic transistor amplification in class AB (80 W / 8 Ohm per channel) and an impressive size power toroidal transformer. In a similar segment, D-class amplification is often found now, but so far everything that I have heard has not convinced me of the unambiguous advantages of D-class. There were semi-exceptions, when the sound, perhaps, was not bad, but not to be definitely better. Therefore, I will write down the amplifying part of the Rotel A14 as a plus, but leave the conclusions at the time of listening. In general, the body of the device is filled to capacity: there are several boards in the design, including the upper part of the body is occupied by a DAC board built on an AKM chip supporting signals up to 32 bit / 768 kHz. In terms of optics and coaxial, the DAC understands signals up to 24 bit / 192 kHz, and over USB there is support for DSD and DoP. For Windows systems, you need to download and install a special driver from the Rotel website, OSX systems perceive the DAC natively. The phono amplifier of the amplifier is designed only to work with MM-heads and has no settings. In general, this is logical, and, perhaps, an attempt to build in a budget phono stage with support for MC heads would be superfluous in this case.

A high-quality device with a solid DAC on board and a good set of functions. And this is a classic amplifier in many respects, which will be intuitively understandable to both those who bought their first apparatus and those who acquired the first amplifier several decades ago. But at the same time, in terms of a set of functionality, the amplifier is absolutely modern. For its segment, the Rotel A14 looks very good, and can be used in a variety of systems – from a classic combination with a CD player and a vinyl player to a variant when sound is collected in a stereo system (both from classic and from several digital sources, including phones-tablets) and up to the output in stereo mode of sound for the TV. According to the results of observations and comparisons, the acoustics for the amplifier, in my opinion, is better to select not very tight, but also not very bright in sound. With bright acoustics, you can get too accented highs and a harsh sound. Speakers with low sensitivity should be treated with care, but even more attention should be paid when choosing impedance. If it is inclined to fall below 4 ohms during operation, then you should not count on the fact that such acoustics will work with this amplifier: the sound will be simplified and with losses, especially noticeable at low volumes. And with the right acoustics, an amplifier can sound good.