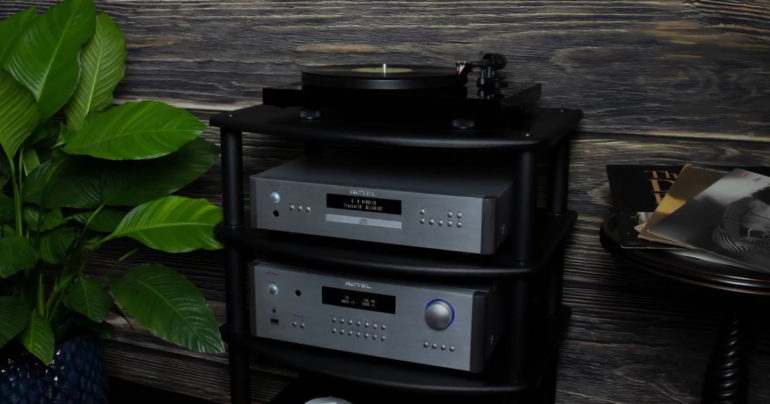 In preparing the article, materials from https://www.audiomania.ru/content/art-8792.html were used. Visit article here.

The Japanese family company Rotel does not need a special introduction to lovers of Hi-Fi technology. For over 60 years, it has been producing mid-range audio equipment, which invariably finds its adherents.

The Rotel RA-1592MKII is the flagship model of its line of integrated amplifiers, recently replacing simply the Rotel RA-1592 . The release of the new version is connected with the temporary shutdown of the AKM factory, which produced DAC chips, which were used in the built-in digital-to-analog conversion unit of the RA-1592 amplifier. This chip in RA-1592MKII was replaced by an analog from Texas Instruments. Along the way, other structural elements of the device were also upgraded, in particular, signal paths were optimized and critical power supply components were improved. In total, Rotel counted 28 elements upgraded, which resulted in increased transient speed and increased sound dynamics.

In addition, the amplifier has become even more modern: it received support for MQA and MQA Studio formats (up to 24 bit / 384 kHz) when a signal is applied to the USB input, as well as Roon Tested status.

But in general and in general, this is a very equipped and versatile unit. It satisfies almost all the requirements that an advanced music lover can present today. From what he could have, but no, you can only recall a regular tuner and streaming player, but that, as they say, is a completely different story. 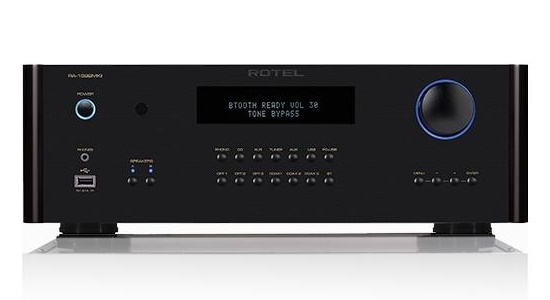 On the left is a headphone output and a USB port (type A) for connecting Apple gadgets. To the right are buttons for selecting one of the two pairs of connected speakers; they can be used at the same time if the AC resistance is 8 ohms or more

The Rotel RA-1592MKII is a fairly large and solid looking Hi-Fi component in a solid metal case with an aluminum front panel lavishly adorned with cute buttons. These, together with a small display, allow you to control the amplifier’s numerous functions. It is distinguished by a high output power of 200 watts per channel (at 8 ohms), which is provided by the corresponding cascade operating in class AB. Two pairs of speakers can be connected to the RA-1592MKII, and the choice between them can be made using the buttons on the front panel or using the remote control. There are also two RCA subwoofer outputs.

As mentioned above, the device is equipped with a DAC unit capable of converting PCM streams with sampling up to 32 bit/384 kHz. So in addition to four analog inputs – three RCA and one XLR – it has a total of eight digital inputs, not counting the built-in Bluetooth module for wirelessly connecting a compatible device. Vinyl players, no less popular today than digital signal sources, are not left without attention: they are provided with an MM phono stage with an RCA input to it. There is also a headphone output: its 3.5 mm jack is located on the front panel. 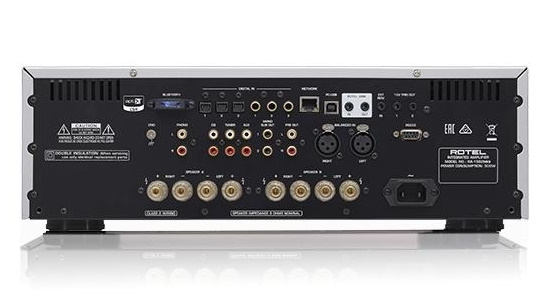 In addition to a variety of audio inputs and outputs, there are also connectors for integrating the amplifier into home automation systems, switching on / off by a trigger signal, connecting to a local network for controlling the amplifier through a browser, as well as software updates.

When testing the Rotel RA-1592MKII, its partners were a mini-PC with Roon Core software on board, as well as a TEAC NT-505 network player that scooped music content from a NAS server, as well as from the Tidal service. Functionally, these two sources overlap – you can get away with just one of them – but we were interested to see how the amplifier sounds when a very high-quality analog signal is fed from a TEAC player to its XLR input. We used the TEAC CG-10M-A clock generator to help this component in order to make the audio signal even more perfect.

The digital stream was directly fed from the mini-PC to the USB port; Roon Player served as a software network player in this case. To hear how the system plays from the coaxial input, we used the Bluesound NODE N130 network player , which has an appropriate output.

As you can see, from the sources everything is very modern. But for the role of acoustics, we invited comparable-priced retro-style speakers – Old School Monitor Two .

The purpose of an amplifier is to power relatively weak signals from sources. But you can look at this mission in another way: it modulates the electrical energy available from the wall socket, in accordance with the musical signal received at one of its inputs. Therefore, a lot depends on the quality of the power supply. In our conditions, it was not enough for the RA-1592MKII to fully reveal its potential. The Powergrip YG-2 surge protector came to his aid , with which the sound of our Hi-Fi system finally satisfied the high demands of experts. 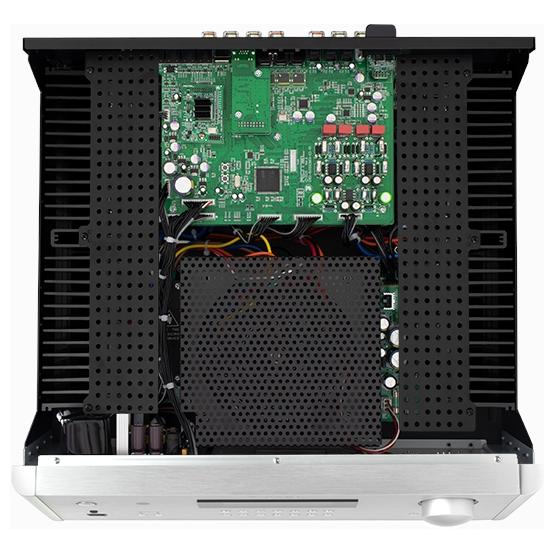 USB port (type B) that allows you to receive PCM streams from a computer with sampling up to 32 bit/384 kHz, including MQA and MQA Studio formats (24 bit/384 kHz), preset in USB Audio Class 1.0 mode, which limits the sampling rate to 96 kHz. To put it into USB Audio Class 2.0 mode, on a Windows PC, you need to boot from the bundled CD and install the driver, and then select the desired position in the amplifier menu. For macOS this is not necessary.

Let’s start listening to the XLR input. In the performance of the described system, the Fourth Symphony of P. I. Tchaikovsky recorded by the orchestra conducted by V. Gergiev is very pleasing. Due to the weighty bass foundation, the scene turns out to be large-scale, and due to the high detail and elaboration, it is perfectly structured and deep. Visibly presented are not only groups, but also individual instruments with all their inherent timbre richness. At the very beginning, full-bodied brass voices are impressive, giving a start to the energetic first movement. The quietest fragments are as well drawn as the thunderous fortissimo, and the sudden transitions from the first to the second make you shudder. The swiftness of the attack is confirmed by the resilient and voluminous beats of the drums.

Less saturated jazz arrangements of the classics from the album The Best of Play Bach by the J. Lucier trio give no less pleasure. Graceful melodies flowing one into another and the same changeable rhythms are served in all their glory. The theme-setting piano is full-bodied in all its octaves, and the soloist’s playing is marked by high artistry, percussion fills the airy and spacious stage with sound brilliance, string textures are palpably present in the double bass’s voice.

When switched to the PC-USB input, the sound retains tonal balance, organization, high detail and saturation. It loses a little in natural smoothness, low frequencies become a little less significant, but in general its quality remains at a very decent level. So in the energetic and groovy composition of Rapture of The Deepfrom Deep Purple’s self-titled album, the bass turns out to be quite enough to provide it with pressure and brutality. The vocals are expressive and articulate, clearly focused against the background of the instrumental arrangement, and listening to this famous piece is certainly a pleasure. The situation is much the same with the playback of digital content fed to the coaxial input – of course, until you need to convert MQA content or high-sampled Hi-Res audio into sound.

And, finally, Bluetooth, the support of which may seem out of place given the high status of the Rotel RA-1592MKII. However, the ability to “quickly” listen to something from a smartphone is not at all superfluous – we do not always listen to music, sitting comfortably in an armchair. Nevertheless, to create a pleasant acoustic background, the sound through this wireless input, and even with the increased quality thanks to the aptX codec, turns out to be quite acceptable. 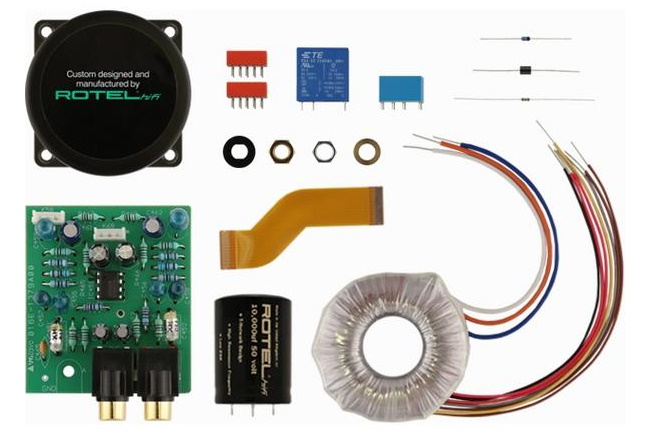 In the upgraded version of the amplifier, many audiophile-class electronic elements are used, and traditionally for Rotel, a toroidal transformer of its own production is installed in the power supply

If you’re looking for a versatile, well-equipped, conventionally sized amp for a Hi-Fi system with multiple sources and even two pairs of speakers, the Rotel RA-1592MKII is a top choice in the mid-price segment. It has high output power, balanced, detailed and energetic sound, so with the right selection of the remaining components of the audio path, and if necessary with the use of a surge protector or air conditioner, you can get a truly pleasing sound. We advise you to pay close attention.