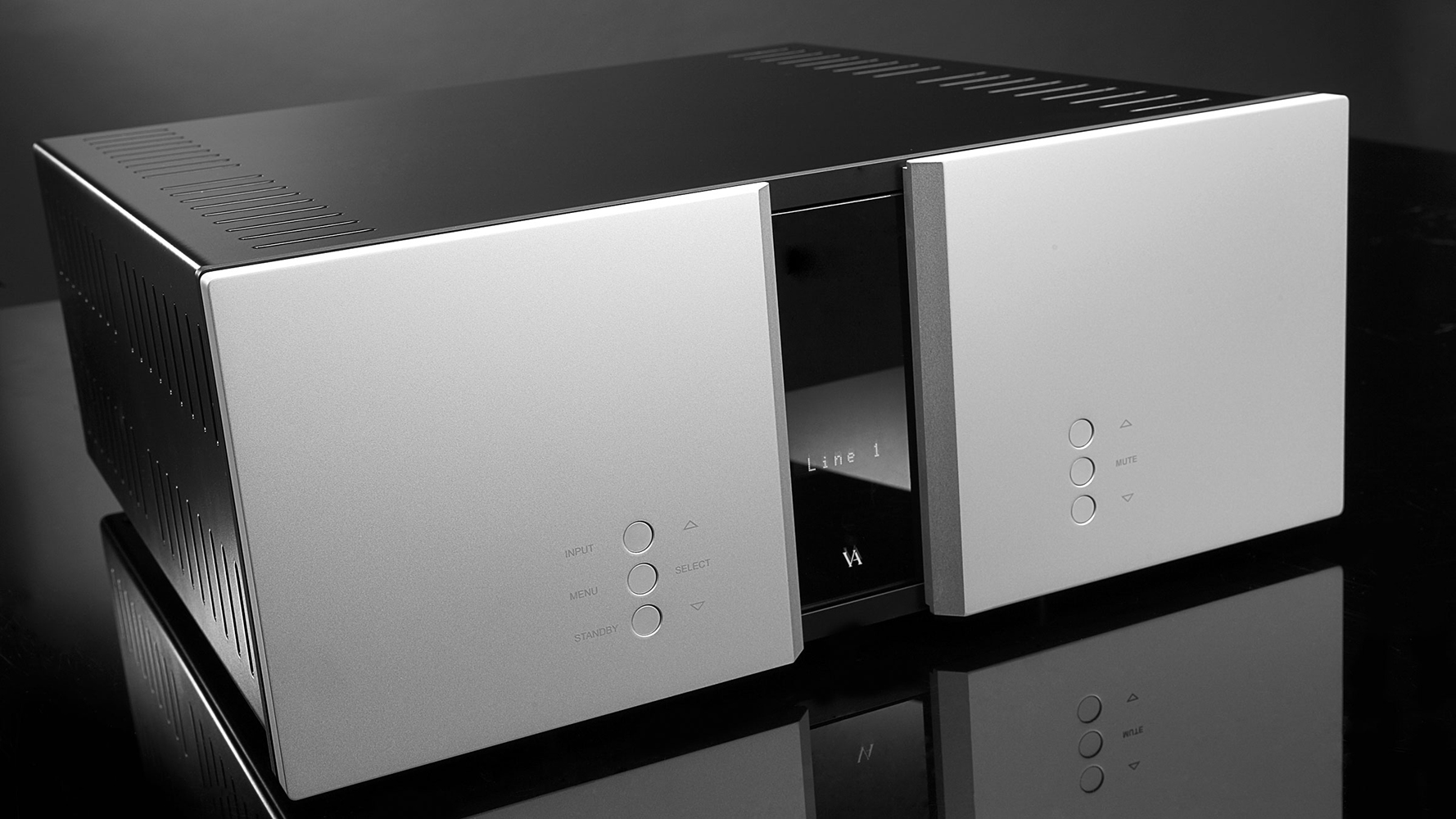 300W of raw power and 37 kg of materials make up the Vitus Audio RI-100, an “introductory” amplifier for Vitus Audio but “elusive” for many of us.

It is common to say that everything is relative and the world of high-end, like that of music are universes to which this saying fits perfectly.

We do the best we can, setting rules and creating formulas to tame some unruly concepts like “fluid music”, “nice sound”, “audiophile speakers” and many others you know and read everywhere. In this web of relativity, Vitus Audio, from Denmark, calls the Reference series, the smallest of its four series, an “introductory category”. 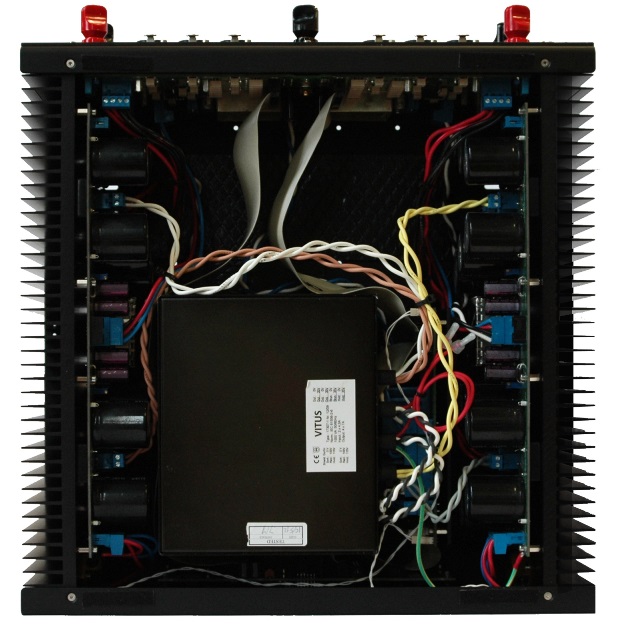 While in other companies the smaller, introductory series also contains “introductory” and low-priced models, this is not the case. The Reference series is an exceptional series of high specifications that offers a complete range of machines from DAC and CD transport, to preamplifier and final. Among them is the complete Vitus Audio RI-100 that we have in our hands for testing. The other series that exist are, in ascending order of quality, the Signature, Masterpiece and Design Studio series, the latter of which is only available on special orders, with money not being a limitation as to the result to be achieved.

Hans Ole Vitus, the founder of the company, a brilliant mind and sound fanatic, had worked, among other things, for several years at Texas Instruments and after the founding of Vitus Audio, which has a big and respected name in the field of sound, gives all his energy to make the dreams of many audiophiles come true.

The RI-100 heavy chassis is made of a non-magnetic aluminum-steel alloy, quite thick and sturdy. Two metal “shields” on the front accommodate the adjustment switches and surround the small but legible and bright screen. The menu is very simple without unnecessary settings, as we can adjust the screen brightness, reset the system to factory settings and set the original volume, “volume step” as stated by Vitus Audio, of each input separately.

So we do not worry about the different output levels of each machine, that is, we can navigate from source to source without abrupt changes in volume. Also through the menu we will connect the small and elegant Apple remote control that comes with the amplifier and has the simple settings of switching inputs, volume, play / pause and menu entry.

The same sliders plus a mute and standby mode can be found on the front panel buttons we mentioned. The 300W it has per channel is expressed in a range from -99dB to + 6dB, with discrete and variable steps. From -99dB it “flies” to -69dB, from there up to -45dB it goes in steps of 6dB, which become 3dB to -30dB and from there on it continues with steps of 1.5dB.

The main difference between the RI-100 and the rest of the Vitus integrated amplifiers is the use of the more traditional EI type transformer, instead of the superior UI shape it chooses in most of its products. The transformer is tightly closed and centrally located, occupying most of the amplifier.

Also the class of the amplifier is AB, which while it is not as “hot” and energy consuming as the class A that exists in the other amplifiers of the company, the coolers together with the holes in the ends of the body are necessary for the cooling of this beast. Particular attention has been paid to the volume control, where a topology with networks of resistors for each level and a constant resistance that is in series with these networks instead of the more classic series or scale attenuators has been selected.

According to Vitus this topology brings the best results. Also to avoid unwanted pops that can end up on the speakers, they put the “old” network of resistors not to change directly but to have a delay before retiring creating a small drop in volume during the change which is not felt .

Of course what may surprise some is the sound that the resistors make when they change, a light click that is heard by the amplifier either at low levels or in complete silence. The RI-100 is an integrated amplifier with mainly analog orientation, since it does not have digital ports or built-in DAC (it accepts it as extra). It has three balanced XLRs and two RCA line inputs shared left and right, next to the high quality boards.

There are also two XLR pre outputs for possible amplifier or subwoofer connection. The RIAA mark on input 5 and the ground in the center of the rear indicate a large wild booster, capable of accepting up to two modules for phono stgae, DAC and headphone amplifier.

So the RI-100 can be turned into a complete system that will manage digital files or our turntable as well as headphones. Along with the amplifier comes a USB with the company logo in a metal box, like an expensive cologne, which contains the drivers, manuals and brochures of all Vitus Audio products.

There are times when you get into a routine and listen to music out of habit or in our case out of “obligation” (the two quotes are very few), you suddenly remember why you really love some songs and what pleasure music can offer you. Feelings and emotions that may have been forgotten return to the surface.

That moment came when we listened to the RI100, in which we put on music and adored songs just for enjoyment, after the evaluation was over. Even during the critical listening the mind left and was distracted by some passages or verses. We had to use the ATC SMC70SL, which are large and quite “unconscious” to drive, the faithful Sony XA9000ES for our CDs and the Oppo UDP-203 for hi-res files.

The first thing that made the Vitus amplifier stand out was the comfort it showed in managing the signal dynamics regardless of frequency, while thanks to the power of 300 watts, it did not struggle for a moment. Wavy music with its ups and downs, flowed in our ears without tiring us and like small waves sprang details that we had not noticed, such as the noise made by the musicians in the quiet passages of Hall Of The Mountain King, which is part of Edward Grieg’s Peer Gynt Suite by the Cologne WDR Symphony Orchestra.

In her emblematic and pompous finale, we listened to the cymbals as they should with their volume, sound and dynamism. He showed similar comfort in the introduction of the fifth part of the 2nd Mahler agreement by the Hungarian Radio Chorus, conducted by Ivan Fischer. The drum spread in space, full of its low frequencies that came like a fist in our stomach.

The projection of the lows from the RI-100 was exemplary, until the last frequencies that the ATCs could reproduce, there were stents and formed. The “bottom” of the frequencies was not compressed but was expressed either through the hit of a boot or from the double bass fingerings we enjoyed in Dave Brubeck’s Take Five. If we have speakers that reach low the connection of a sub may not be so necessary.

But the dominance of the amplifier was evident in the difficult and sensitive trembling, as it was silky, airy, free of noise and electronic marks. The scene was wonderful, the instruments lived in their space, placed correctly on all axes and could be easily distinguished. But the middle area also had its honor, especially the voices and we understood this when in the personal outbursts of Freddie Mercury in Bohemian Rhapsody, the hair stood on end and the emotion of the singer passed through us.

We also could clearly hear the space and the amplifier on which the guitar was recorded when Brian May was playing his solo. Some quick violin passes, which on other amplifiers sound like a tangled patch, crystallized and the notes played crystal clear. If we wanted to complain about something this might have been a slight emphasis on the low, which is not a sound disadvantage but a more personal aesthetic preference.

Over time the amplifier was very good, and “read” the fast and slow parts of the music at the right speed, neither faster nor slower. We leave this test with two wishes. I wish we kept the RI-100 a little longer to accompany us to other auditions and really if the Reference series has this character we look forward to hearing the most expensive models.

Vitus Audio RI-100 is an amazing amplifier, at a price that is much more affordable than the counterparts of the Signature and Masterpiece series, which justifies the reputation of Vitus Audio and decisively enters the wishlist or better yet the wish-i-had-list.