Weighing 7.8 kg and having a 5.1-channel amplifier on board, the Yamaha RX-V485 AV receiver can provide 165 W (at 8 ohms, 1 kHz, 10% THD) or 115 W (6 Ohm, 1 kHz, THD 0.9%). With the simultaneous operation of two channels, the power will be 2 x 80 W (6 Ohm, 20 Hz – 20 kHz, THD 0.09%). Here you should pay attention to the distortion indicator – we will not take into account the upper, peak values ​​of the output power, they are rather intended for an advertising brochure. But the fact that when working on a pair of channels, the Yamaha RX-V485 guarantees an honest 80 watts at a very low distortion level (0.09%), is commendable. The device, judging by the specifications, will cope not only with movie tracks, but will also be able to demonstrate decent Hi-Fi sound in stereo.

Also in the list of “chips” of the Yamaha RX-V485 receiver it is worth noting the ability to work with wireless surround speakers (MusicCast 20 or MusicCast 50), the proprietary powerful CINEMA DSP 3D processor, the option to work with the voice assistant Amazon Alexa, and a lot of supported streaming services … And, of course, the now legendary system of automatic setup and room calibration using a plug-in microphone – YPAO (Yamaha Parametricroom Acoustic Optimizer).

One of the most important features of the Yamaha RX-V485 is the updated CINEMA DSP 3D processor. The company has once again upgraded the database of measurements of the best concert halls and clubs in the world and developed on its basis the most advanced algorithms for the formation of a three-dimensional sound canvas. In addition, of course, to the existing (and already become standard) formats Dolby TrueHD, Digital Plus and DTS-HD MasterAudio.

To match the processor and digital-to-analog converters. The model uses chips with 32 bit / 384 kHz rates from Burr-Brown (three dual-channel BB PCM5101A chips). The amplifier stages of the Yamaha RX-V485 AV receiver operate in class AB and are implemented on discrete elements – complementary pairs of powerful Toshiba A1941 / C5198 transistors are mounted on an impressive cooling radiator. The power supply unit uses an impressive power transformer on an E-shaped core. The volume control system has also been significantly improved relative to the company’s past receivers.

But most interestingly, CINEMA DSP 3D has a Virtual Presence Speaker that produces 7.1 3D sound (emulating additional “height” speakers through the front speakers) even when using your 5.1-channel home theater setup! So all the advantages of the newfangled movie tracks will be fully revealed. If desired, Yamaha RX-V485 can be connected to Yamaha MusicCast 50 or MusicCast 20 wireless speakers, thus forming a wireless (in terms of rear acoustics) DC. And, of course, MusicCast allows you to start playing music in several rooms at once – that prerogative, for which previously you had to turn to manufacturers of “smart home”, is now available to everyone! Music clients for Spotify, Tidal, Qobuz, Deezer are already embedded; if you have an account on these services, you just need to enter your username and password. Playlists are synchronized with one touch from a smartphone or tablet.

Amazon Alexa Voice Assistant – Available on MusicCast. Voice control is only available in English via Alexa. But the device itself can be controlled through the ergonomic application for the AV Controller smartphone (it is just available in 25 languages). And the cherry on top is the Compressed Music Enhancer system optimized for Bluetooth streaming. According to the company, it really “fixes” this format, guaranteeing more accurate sound.

The Yamaha RX-V485 AV receiver does not cause any problems when connecting and setting up. The on-screen menus are flawlessly ergonomic, and the YPAO module has traditionally received a round of applause. The entire installation will hardly take you more than half an hour – compare with a couple or three hours that would be required for a setup of a more “age” device. The proprietary AV SetupGuide application, which contains detailed instructions for each step of the work, helps especially in setting up. There is one more pleasant news – the Yamaha RX-V485 has the ability to connect acoustics according to the bi-amping scheme – a definite win for stereo!

How many amplification channels should a modern low-cost receiver have? How to keep the price affordable without sacrificing rich networking capabilities and sound quality? And how, finally, to make the advanced functionality understandable for beginners who are far from the installer’s subtleties? The problems with the development of mainstream technology are now no less than those with the creation of high-class home theaters, and we will consider the subtleties of their solution using an excellent example – the new Yamaha RX-V485 (HTR-4072) receiver.

Finding answers to all of the above questions is not easy, but Yamaha has approached them so radically that it is simply breathtaking. At the moment, the company catalog contains exactly thirty models of receivers, not counting a pair of multichannel amplifiers, also aimed at home theater. From such a variety of configurations, the eyes simply run up, but many of them will have to pay a very substantial sum. But below the level of $ 500 you will not particularly roam. At the same time, the Yamaha RX-V485 (HTR-4072) model intrigues not only with a humane price tag, but also with a surprisingly voluminous list of functionality. However, before talking about the characteristics and technologies, let’s do a quick visual inspection. In fact, talking about the design of AV receivers is extremely dull. Sometimes it starts to seem Nevertheless, even in this canon, Yamaha designers still managed to add a touch of originality. The frameless (as it is now fashionable) polished platband perfectly harmonizes with the matte polishing of the “basement”, in which the inevitable drum and large input selector buttons are located. It turned out stylishly, intelligently and much less banal.

It was also decided to diversify the rear panel as much as possible, and since there are relatively few connectors on it, a diagram of a typical theatrical setup with the designation of the speakers appeared in the free space, as well as a brief instruction on cutting and installing the speaker cable. It feels like the developers really tried their best to make it as easy as possible for beginners to enter the world of home cinema. Among the pleasant surprises of commutation, we note the presence of a pair of coaxial inputs – such generosity is not often found in this price category. “Optics”, of course, is also present, but there were no USB ports on the back, therefore, dongles like Chromecast, if necessary, will have to be connected only directly to the TV, and USB-media exclusively from the front. 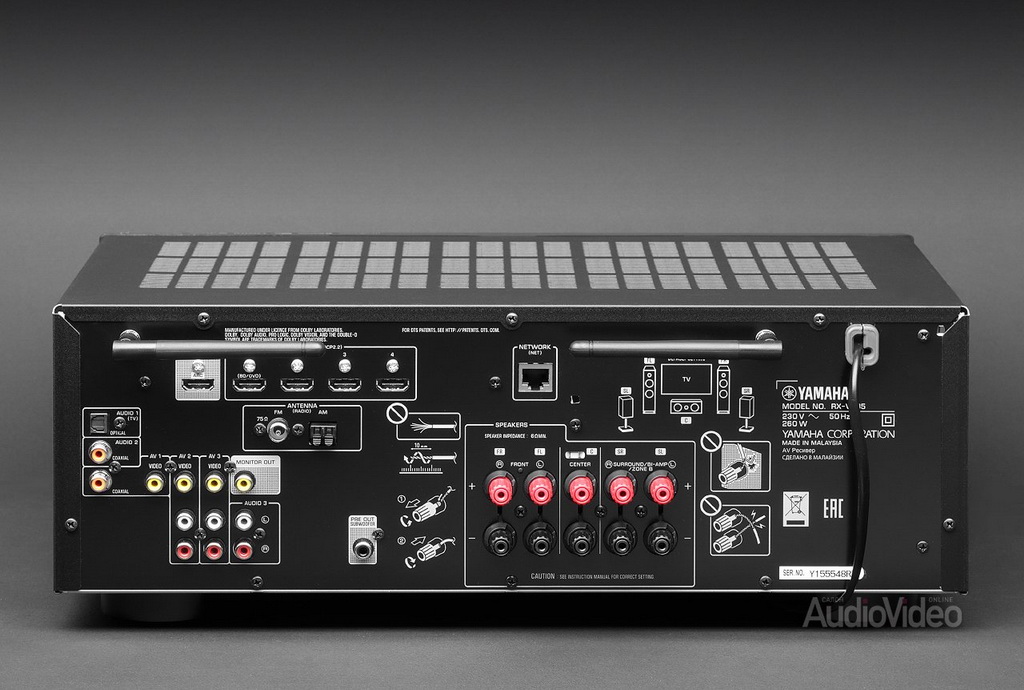 Yamaha RX-V485 (HTR-4072) is built on a classic 5.1-channel scheme. Today, however, it takes a certain amount of composure to settle on it to create a home installation. After all, if you believe the advertisements, even a decent Android tablet nowadays simply must be able to play tracks in Dolby Atmos. But the main thing here is not to succumb to provocations, but how everything should be analyzed and weighed. Why ask yourself a few questions.

How many movies with original Dolby Atmos tracks do I have in my library? – Do I understand that if I do not know English perfectly, I will not be able to enjoy the top channels in Hollywood films? – Am I ready to drill holes in the ceiling and pull the wiring to them? – Does it make sense to sacrifice for the sake of Atmos other advanced functionality, such as wireless multiroom? Well, then everything is simple and logical. Take the Yamaha RX-V485 and build a meaningful entry-level setup based on it. And, believe me, instead of the illusory advantages of cheap multichannel, this receiver will reward you with a whole fireworks of features that you would not even expect from a device of its price level. Let’s start with the aforementioned wireless multiroom. It is implemented through the proprietary MusicCast system, which is valuable for home theaters primarily by the ability to organize rear speakers and a subwoofer connection via radio. Yamaha currently produces two types of smart wireless speakers – the monaural Yamaha MusicCast 20 and the stereo Yamaha MusicCast 50.… Both of them can be used both for sounding individual rooms and for working as part of a multichannel installation. The resulting music network is controlled through the MusicCast Controller mobile application, which is accessible, of course, both in the App Store and in Google Play. Just keep in mind that you won’t be able to broadcast AirPlay streams via MusicCast, although you can connect to the receiver itself using this protocol without any problems. But Google Cast is not supported at all, so if your TV does not run on Android TV, you will have to buy a Chromecast whistle to transfer content to it from your Android smartphone. 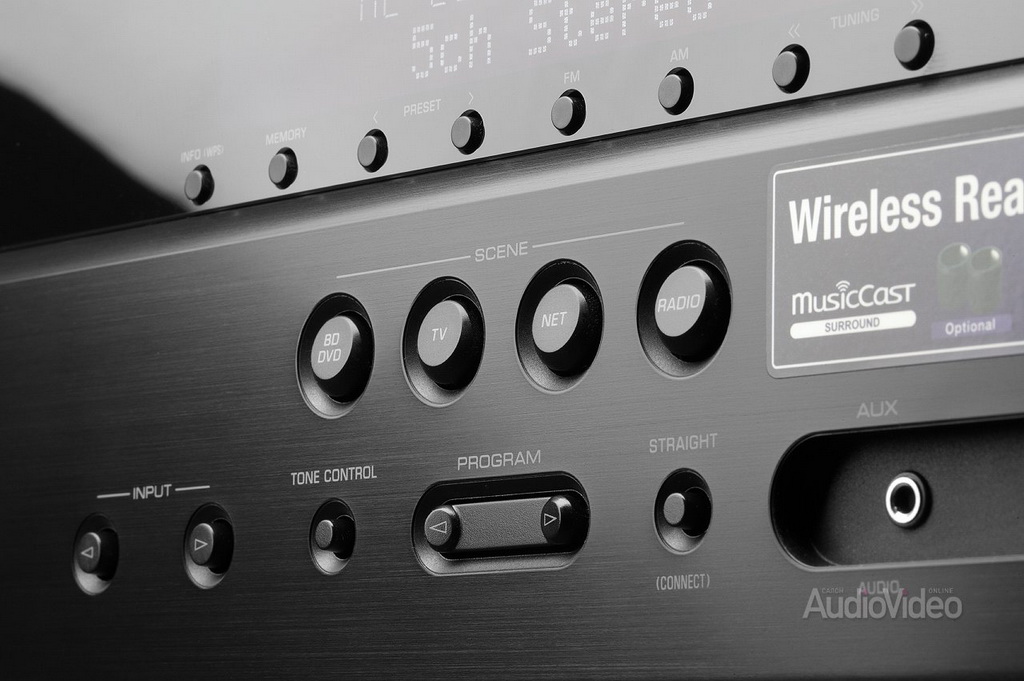 But from a USB storage device connected to the receiver, music (including FLAC up to 24 bit / 192 kHz) is transmitted into a multi-room environment without problems. The exception is DSD files, which, again, can only be played from the receiver itself. The device is also able to receive Internet radio and work with the global streaming services Tidal, Spotify, Deezer, Napster, Pandora and Qobuz. If we abstract from multi-room networks and cloud technologies, then three important points should be noted in the offline functionality. First, the Yamaha RX-V485 (HTR-4072) features a proprietary YPAO auto-tuning system. How it works, I think, is not worth retelling once again, but the very fact that a very inexpensive receiver can build acoustic profiles of a room is very pleasing.

The second feature, which is also quickly becoming an essential function, is setting up and full control of the receiver through a mobile application. In our case, it is called AV Controller, but if you are configuring the receiver for the first time, I recommend first of all to install another proprietary program on the gadget – AV Setup Guide. In a simple and visual form, she will guide the beginner through all the stages of switching and configuration. The third point concerns the sound itself. Despite the simplicity of switching, the device allows not only sounding the second zone (limiting itself to the 3.1 configuration for the main setup), but also connecting the front stereo pair in biumping mode. Digital video switching includes four HDMI inputs and one output with support for 4K and HDR, including Dolby Vision. Full HD or lower resolution pass-through can be upscaled to Ultra HD if desired, but I would advise leaving this job to the TV itself. Not because the receiver turns out badly, but due to the fact that no one will prepare a signal for the matrix better than the native electronics of the panel itself. If we talk about the nature of the sound, then it is felt that the creators of the Yamaha RX-V485 (HTR-4072) had a cinematic sound as an easy priority. Particular attention is paid to the construction of the musical scene: it is broad, detailed and very voluminous. And bearing in mind the price of the device, I would even say it is unexpectedly detailed and accurate enough. 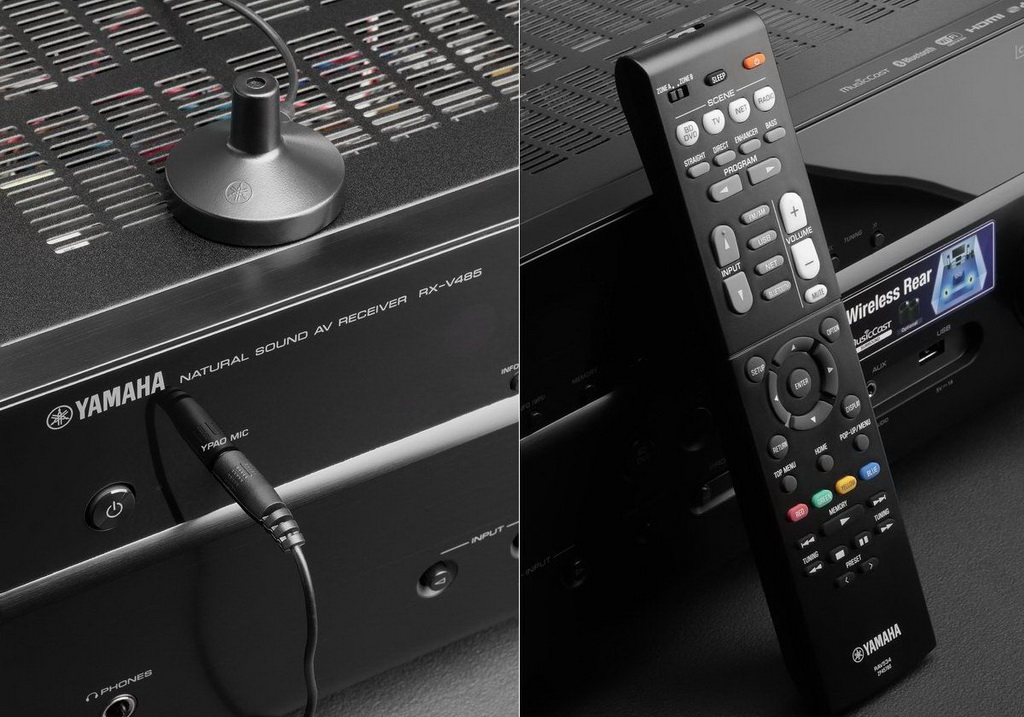 The tonal balance is slightly shifted towards the edges of the range, as a result of which spatial effects are perceived even more clearly, and the bass gains additional weight. This specificity must be taken into account when choosing acoustics, especially if the musicality of a cinema system is no less important to you than its spatial and dynamic characteristics. In short, the Yamaha RX-V485 (HTR-4072) is an excellent inexpensive all-rounder for fans of spectacular cinema, bright sound, and progressive streaming technologies.