Panasonic at the very beginning of 2022 presented its flagship Premium DIGA DMR-ZR1 Blu-Ray 4K recorder with a built-in tuner and the ability to record up to three TV programs simultaneously on a built-in hard drive. In the proposed Panasonic DMR-ZR1 review, we will consider the features and characteristics of this device.

The main feature of the ZR1 is the case design and circuitry, which claims to be the “highest class in the history of DIGA”. The large and durable case with external dimensions of 430 x 300 x 87 mm (width x depth x height) and weighing about 13.6 kg has the same high rigidity and low center of gravity as the UB9000 player .

Based on the 4-layer base chassis, the 3-layer drive base and the UHD BD drive itself are mounted. Chassis rigidity has been enhanced by attaching extruded aluminum front and side panels to the base chassis. Thanks to the double-layer design of the top panel, improved vibration damping performance has been achieved.

The interior is divided into 4 blocks: power board, HDD, BD drive and digital noise reduction board. The hard drive suppresses vibration due to drive rotation by directly attaching a 4mm thick steel plate. In addition, it is equipped with a newly developed independent power supply optimized for digital circuits and drives.

The power reserve has also been increased. Every digital circuitry has been significantly upgraded from the UB9000. Measures against jitter were provided such as the use of an ultra-low phase noise crystal oscillator for the system clock and an ultra-low jitter PLL for the AV clock.

In addition, for each interface such as USB, HDMI, LAN and coaxial digital audio, playback quality is improved by noise reduction using a dedicated capacitor and low clock jitter design.

Regarding the Panasonic ZR1 recorder case and circuitry, a spokesman for the company said, “In order to realize ‘4K recording/playback’, an analog approach was required to radically overhaul the power supply, circuitry and case. It also contributes greatly to improving image quality.”

4K image quality processing has been upgraded. Added 4K 24p/30p conversion and reduced the brightness of live subtitles. In terms of video, the UB9000 will continue to feature the original “4K Real Chroma Processor plus” signal processing technology that delivers high-quality 4K and HDR.

The Panasonic DMR-ZR1 recorder uses technology developed by the Panasonic Hollywood Research Institute (PHL). 4K / 4:2:0 signals are processed by high precision multi-tap device. The Panasonic ZR1’s newly installed feature converts 4K broadcasts to 24p or 30p and then displays them on the screen.

Although a 4K broadcast has 60 frames per second, “4K broadcast movies are originally 24 frames. Most 4K dramas also contain 30 frames. The advantage of this technology is that the original frame rate can be converted to 24p/30p. It can also output 4K / 4:4:4 by reducing the number of frames. Staz should note that this function must be selected manually from the menu.

The system gamma adjustment range has been doubled from ±6 steps to ±12 steps. In this regard, the contrast can be adjusted more precisely. A related setup menu has also been added that links dynamic range and system gamut. So it’s generally easier to set up HDR video.

The “subtitle brightness adjustment” technology, which has proven itself in UHD BD and BD playback, has been extended to broadcast programs. The subtitles of the live movie sent along with the video are extracted using a newly developed original technology. It became possible to reduce the brightness of subtitles, minimizing their impact on other parts of the image.

This adjustment is primarily aimed at 4K and 2K broadcasts in HDR / SDR modes. Brightness reduction should be used to reduce glare from subtitles, such as when watching 4K HDR movies in a dark room.

The DMR-ZR1 Premium DIGA is equipped with 22.2-channel audio with Dolby Atmos conversion.” The 4K DIGA Series are the only recorders to record and stream 22.2 channel audio, which is rarely shown on the NHK BS4K.

However, there is a problem that a sound system compatible with such multi-channel audio is very limited. Therefore, it is very difficult to prepare a 22.2-channel environment at home. The ZR1 video recorder uses a new conversion technology co-developed with Dolby.

By combining existing Atmos-compatible devices such as AV amplifiers, soundbars and TVs, the original 3D sound field can be reproduced. 22.2 CH Atmos conversion is possible not only for live viewing, but also for HDD recording and BD dubbing. The company said in a statement:

“During the Atmos conversion, it does not affect multitasking performance. Atmos’ existing content is mostly movies. But NHK BS4K has live music, concerts, dramas, sports, etc. There is a 22.2-channel program that can expand the sound field.” 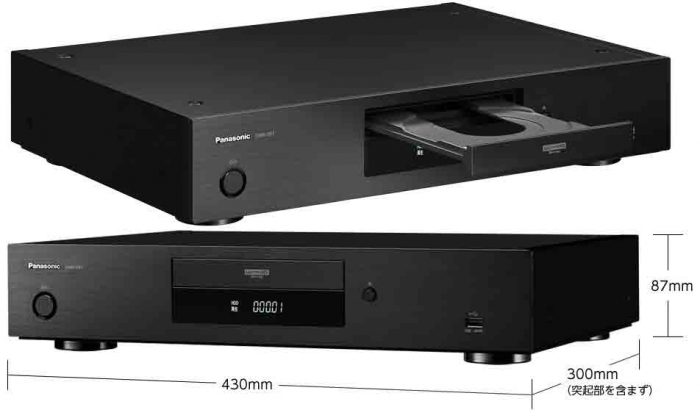 In addition to 22.2-channel audio, the recorder has “high-definition audio” and “theater mode” modes. These modes are capable of turning off technologies to improve sound quality. These modes are best used for playing high resolution files: PCM 384 kHz / 32 bit / DSD 11.2 MHz.

The DMR-ZR1 also features a “remaster” function and a “tube sound” function that produces a warm sound similar to that of a tube amplifier. Since the ZR1 “concentrates the stream to be put into the analog audio output, there is no analog audio output connector. The RCA/XLR output found on the DMR-UBZ1 and the analog multi-channel output found on the UB9000 were not installed.

The ZR1 has a built-in 6TB hard drive, which is the largest capacity for 4K DIGA. The device allows you to record up to 3 broadcast programs at the same time in 4K / 2K resolution. For recording 4K broadcasts, uncompressed DR mode and long-time compressed mode are available via the HEVC codec, which records at 4K resolution while reducing the amount of data.

The built-in 6TB HDD can record and store up to 390 hours of 4K content in 4K DR recording and up to 4680 hours in 4K compressed mode. The ZR1 added “1.3x recording” to the compressed 4K mode. This is a mode designed for “perfect dubbing of 4K programs within 2 hours” onto a 25 GB BD-R.

The company stated that in DR mode you can rewrite only 1 hour 54 minutes, and if you record in 1.3 mode, then 2 hours and 15 minutes will fit on the disc. 1.3x recording, which can be limited, is a convenient mode to use.

Communication with smartphone and AI

The ZR1 is also equipped with a smartphone/tablet tethering function. With the free DokodemoDIGA app, you can watch recorded programs on your smartphone or watch them in real time while at home. Not only programs, but also photos and music stored in the recorder can be downloaded to a smartphone.

The ZR1 recorder is equipped with a backlit remote control that can be operated even in a dark room. Button layout has been optimized. You can now easily manage detailed settings such as audio and subtitle selection, as well as picture quality settings.

During UHD BD / BD playback and program editing, some buttons (TV guide, home, etc.) not directly related to playback / editing operation are disabled so that viewing and editing are not interrupted.

On the one hand, the DMR-ZR1 recorder can be described in a couple of words: “For all occasions.” On the other hand, I would like to ask the company that released this monster in 2022: “Isn’t it too late to release a Blu-Ray recorder?”. However, if the stars are lit, then there is someone who is ready to lay out such an amount for the sake of this perfection.

In this article:Reviews
Don't Miss:

Advertisement
X
Subscribe to get the best Tech news and reviews of the week.
By signing up, you agree to our Privacy Notice and European users agree to the data transfer policy.
Close
02/10/2022