Searching for the best UHD Blu-ray player on the market the research ends here. On the Pioneer UDP-LX800, a device that took a few years to appear, but now exists. It is as if Pioneer was stoically waiting for Oppo to “pull” the plug.

With Oppo announcing that it is stopping the production of players, within a few months Pioneer announced not one, but two such devices. The UDP-LX500 and the larger UDP-LX800 we are testing here. Panasonic did the same with the excellent DP-UB9000 we tested in an advanced issue.

The Pioneer with the UDP-LX800 is now the king of the class, not because it is the most expensive out there but because it is the best. Of course one would say – and rightly so – that the market for UHD Blu-ray discs is very small and that the friends of the image have turned to Netflix. That’s true, but when it comes to high-end imagery, it’s definitely not on Netflix.

Something that of course we confirmed in this test. But it’s not just the picture, the new Pioneer plays just as well on both CD and SACD audio. It is a universal device built of independently shielded parts (blocks), so as not to interfere with each other. A lot of data has been used from the PD-70AE, Pioneer’s top CD / SACD player, which we tested in the previous issue.

Pioneer has built the LX800 so that there are no vibrations and interference between its circuits. The disc guide uses special paint on the drawer, while the upper metal surface of the mechanism has a honeycomb relief to suppress tuning and temperatures. It should be remembered that the rotation speed of Blu-ray Discs and SACDs is much faster than that of CDs, which means increased vibrations that can “contaminate” the sound.

Here the disc driver does not transmit these vibrations to the front of the device, as is the case with other players. In the adapter of the power supply, there are independent windings for the audio and video circuits, while the shielding surfaces of the blocks are not flat, for example they have “musical” reliefs such as the “fa key” symbol. 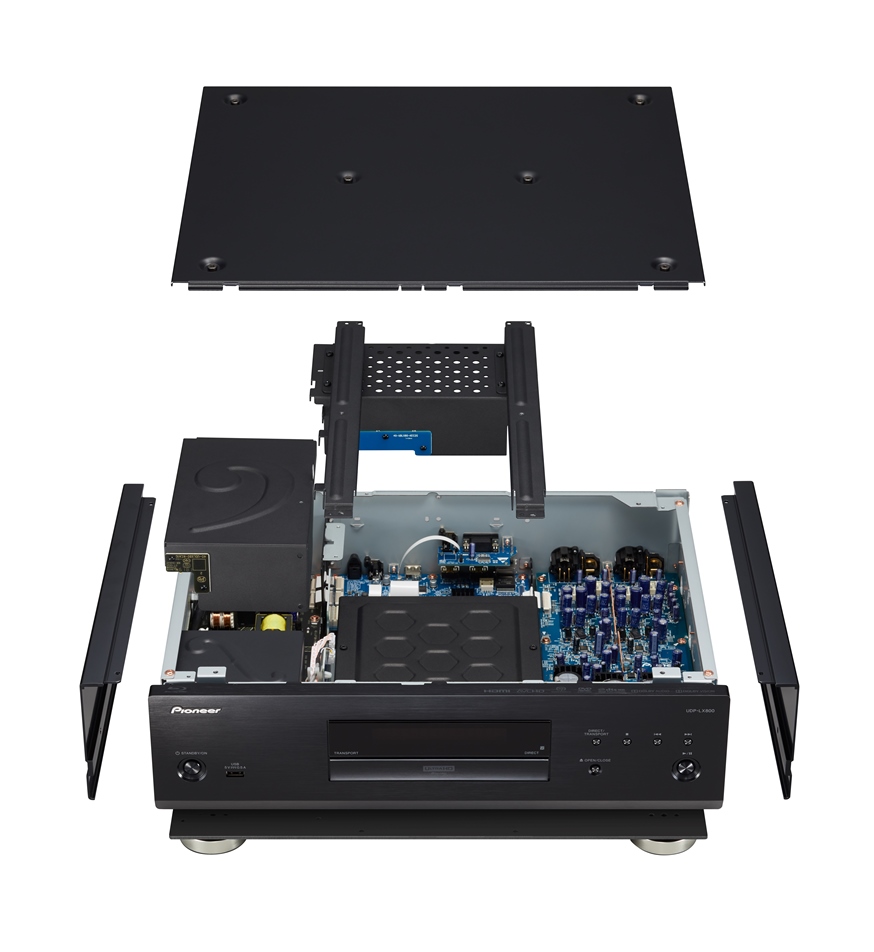 It is not just a “decorative” movement, it mainly has to do with regulating the air flow inside the device. The LX800 has impeccable construction and a worthy descendant of Pioneer’s top -historical- players. The DAC chip is ESS ES9026 PRO, in dual performance. This alone shows the sound superiority of the LX800 over the competition. There is a “Direct / Transport” button on the front, which also shows… sound.

When this is enabled the digital output of audio and video (HDMI) is interrupted so that the player becomes a purebred audio device, while when it is “off” then we have analog audio interruption at the output of the device.

The size of the device is large, looks like an amplifier and has nothing to do with low profile designs. It weighs about 13.5 kg, weight due to a metal plate on the bottom of the device, on the anti-vibration legs and mainly on its bulky components.

The device does not have a built-in decoder, such as the Panasonic DP-UB9000, but only provides stereo analog output to RCA and XLR. For multi-channel digital audio there is a second HDMI, for both Blu-ray and SACD discs. There we will connect our multi-channel audio system. We also have digital audio stereo output (optical and coaxial), but also contact (RCA) for “reference” ground.

With an RCA cable we can ground the player to a free RCA of our amplifier, which improves the signal-to-noise ratio as it reduces ground loops. For the image we have the same processing and infrastructure that we have seen in other Pioneer UHD players, but this device supports HDR 10 (and HDR10 +), as well as Dolby Vision.

Many “weapons” are provided here for the user, such as stating the type of television (or projector) technology he uses, but also “playing” with the metadata of the discs and / or modifying the color space. There is a serious possibility of switching from HDR to SDR, for those who do not have HDR TV, with 15 steps of adjusting (bringing) the image from 100nits to 700nits.

This way we can fine-tune the HDR ratings for an incompatible (SDR) TV or projector. Here the LX800 performs tone mapping, selecting the maximum brightness value of the connected SDR TV as the top.

It goes without saying that the player provides the basic image adjustment, such as brightness, contrast, sharpness or hue. Of course the best combination is with UHD HDR TV, there you can see the richness, the 3D display and the size of the image information that the LX800 is capable of delivering to its outputs.

The quality of the image and sound of the player was confirmed in the studio. Depending on the UHD Blu-ray movie or disc we have, one gets a high quality image texture and amount of information that we only found at Panasonic. For the tests we used the LG E8 TV and the Philips OLED903 as HDR, but also the Sony X9000B as SDR.

All TVs at 65 inches. Immediately, one notices on the screen that the textures and the subtle expressions of the protagonists’ faces are described in an exceptional way, while in other shots we were impressed by the way the outside daylight “wrote” on the screen when it invaded a dark room. .

The brightness of the objects, the reflections, the contrasts and the small shades composed a top image. One of the ones we love here at the magazine.

The image is fluid, with sharpness, depth, contrast and dynamics. To enjoy it we must have a top TV or projector.

The sound is dominated by purity, a sense of serenity, solid or fragile vocals and naturalness. Even at low frequencies we have so much control and expressiveness that this player can be called an audio only device.

It is one of the few times that under the same hood, the image competes with the sound which is of better quality. In fact, when listening to analog outputs, there is power (due to the DAC), a distinct stereo image, melodicity and a special penetration towards the middle. The speed; Especially the movements of the double bass or the cello in a flash.

In general, the audio signature of the device is high levels of finesse -especially in the voices and stringed instruments-, tight bass and sound scene with a wide range and a lot of depth. Above all, however, it is an all-quiet player.

The LX800 does not have a DLNA network infrastructure, although it connects via Ethernet (not) Wi-Fi to the Internet to extract data required by Blu-ray and DVD drives. There are no applications or streaming services. There is still no USB DAC port, though it could since the LX800 has a great DAC.

But we have PQLS circuits, which fight jitter in case the AV amplifier is from Pioneer. There is also a USB port on the front and one on the back for reading hard drives or sticks. These ports act as media players playing from mp3 to dsf files or UHD videos. The way of navigation is the one known as the envelopes.

The menus on the TV screen are mainly presented in high definition characters (not graphics). The remote control is full of functions. There are special hotkeys that work on video, audio and other parameters. There are three digital filters in the sound such as Sharp, Short and Slow.

It is a Universal player that plays as a top SACD player but also as a unique UHD HDR Blu-ray player. An audiophile and at the same time a videophile device. The best optical audio and video player on the market.