Gaming laptops today are almost the only option to get a productive gaming station for a reasonable price. Indeed, sometimes the cost of one video card is equal to the cost of a ready-made solution with the same GPU, albeit with lower frequencies. We also came to review the new generation ASUS ROG Strix SCAR 15 G533, which we tested and compared in some aspects with its predecessor (in fact, a model two generations older in the Intel Core i9-9880H / RTX 2070/32 GB RAM configuration), which Roma uses on an ongoing basis.

Let’s start with the look. Despite the fact that the case of ASUS ROG Strix SCAR 15 G533 is made of plastic, it has an unusual structure that looks interesting and pleasant to the touch. The assembly is of high quality, the arrangement of the control elements and connectors is very well thought out, and a good ventilation system is provided. Compared to its predecessor, the laptop has become more compact, plus the bezels around the screen have become narrower. But at the same time, this did not affect the functionality of the device.

An interesting feature of the device is the customizable Armor Caps. The kit comes with two additional overlays, so you can change the look of your laptop. Moreover, you can make your own Armor Cap by printing it using a 3D printer (a template for printing is available). The illumination of the base of the ASUS ROG Strix SCAR 15 G533 has not gone anywhere. True, in the new generation it has become not as voluminous and complete as before. There is also an NFC Keystone II key that allows you to unlock a hidden folder, launch the desired profile or change the backlight. But somehow he is too weakly holding on to his nest, which is why you are afraid of losing him. On the other hand, for myself, I have not found any use cases for this key. Gamers should definitely appreciate the upgrade that touched the ASUS ROG Strix SCAR 15 G533 keyboard. Now optical-mechanical switches are used here instead of the usual membranes. This takes tactile feedback to a whole new level – it is a pleasure to work and play with a laptop. In addition, the keyboard backlighting has become much brighter, which can also be attributed to the pluses. Of the minuses, it can be noted that the sound of the keyboard has become louder.

The touchpad of the laptop is also noticeably better. He has significantly increased the usable area. The surface is responsive, the sensor accurately detects touches, so during the work process you can completely do without a mouse. As a bonus, the touchpad can be turned into a numeric block of Num-keys by clicking on the corresponding button in the upper right corner.

The set of interfaces for ASUS ROG Strix SCAR 15 G533, like previous generations, covers most of the user’s needs. There is HDMI 2.0b, USB-C 3.2 Gen 2 (DisplayPort, Power Delivery), three USB-A 3.2 Gen 1 and 3.5mm audio jack. I was pleased that ASUS continues to place some of the ports in Strix SCAR notebooks on the rear end. Thanks to this, even with a mouse, power supply and additional display connected, all wires will be hidden behind the screen. The lack of a card reader, perhaps, may be the only drawback for someone. Moving on to the hardware ASUS ROG Strix SCAR 15 G533. Let’s start with autonomy, because on this point it significantly surpasses its predecessor. The laptop in the “typewriter” mode can easily withstand 4.5 hours, which is quite good. Although some of our colleagues managed to squeeze more than 10 hours out of it in economy mode. In any case, the result, as for a gaming station, is good, and even more so against the background of the older Strix SCAR, which can only work for a couple of hours without an outlet. Another plus is that the device can be charged via the USB-C port. Supports charging adapters up to 100W and compatible external batteries.

The 15.6 ″ display in the ASUS ROG Strix SCAR 15 G533 has also received an upgrade. You can choose from IPS panels with Full HD resolution, as well as QHD. In the first case, the refresh rate is up to 300 Hz, and in the second – up to 165 Hz. There is support for Adaptive-Sync technology. In our case, this is a 1440p screen, which, with a diagonal of 15 inches, gives a cool picture. In the system and applications, you have more room for windows and various tools, and in games, additional sharpness and detail pleases. So a certain sacrifice in the form of fps is quite justified, as for me.

And the hardware is quite accompanied by the fact that you can comfortably play and work with increased resolution. The test model is almost top-end – an AMD Ryzen 9 5900HX processor, an NVIDIA GeForce RTX 3080 graphics card with 8 GB of memory, 64 GB of RAM working in dual channel mode, and a fast SSD with a capacity of 1 TB are installed. 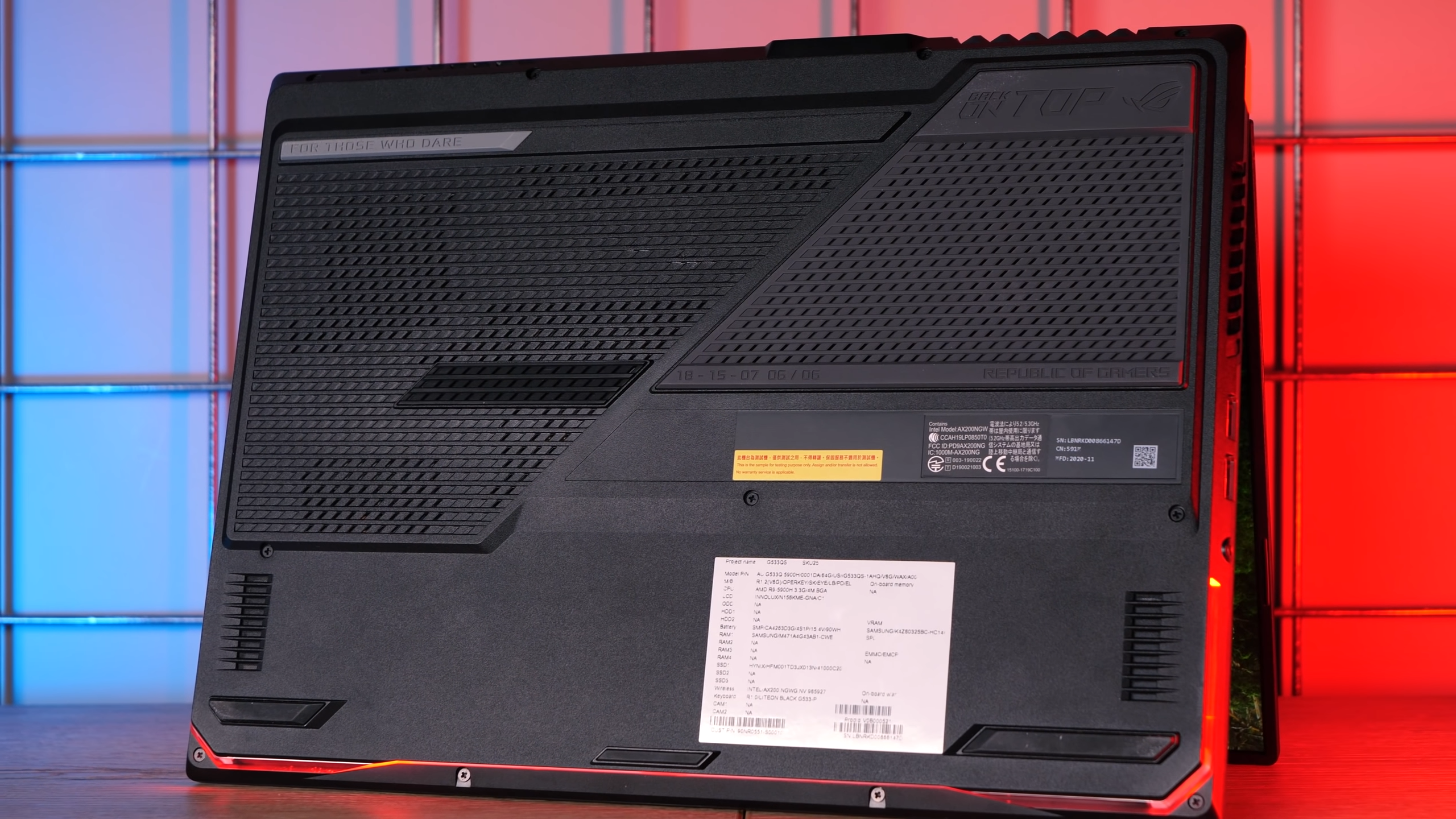 A fairly large system is responsible for cooling all these components, consisting of several pipes, four radiators and two fans. Moreover, ASUS directly at the factory applies liquid metal to the processor, which is used as a thermal interface. This allowed us to significantly reduce the maximum CPU temperatures. But the video card, as before, is content with ordinary thermal paste.

We tested ASUS ROG Strix SCAR 15 G533 in games and synthetic benchmarks. If you set Full HD resolution in games, then the RTX 3080 has no problems at all. Mafia, Snowrunner, Red Dead Redemption 2 – everything goes like clockwork. And even the problematic Watch Dogs and Cyberpunk 2077 work fine at maximum speed with RTX. For clarity – the predecessor with the RTX 2080 shows much more modest results.

As for the 1440p resolution, there is already some frame loss. And not in every project you can set the settings to the maximum and turn on RTX. But, excluding Cyberpunk 2077, the average number of frames in all games is about 50 fps, which is quite enough for single titles.

In benchmarks, liquid metal also showed itself well: in the CPU load mode with a frequency of about 4.2 GHz, the temperature reached 83 degrees; during the combined load of the CPU and GPU, the frequencies became lower, about 3.6 GHz, the maximum temperature was 88 degrees, and for video cards – 85 degrees; and during GPU load only, the adapter temperature reached 80 degrees.

In Cinebench, the Ryzen 9 5900HX performed well. In the multi-core test, it scored almost 13.5 thousand points, while the Core i9-9880H in its predecessor scored only 6600 points. At the same time, during the video output in Adobe Premiere, it was the “old man” that turned out to be better – the rendering time was 11 minutes versus 17 minutes in the new Strix SCAR. Apparently, during rendering, the graphics core was not involved in the AMD processor, while it worked in Intel. And even during the editing of the video, frame loss was observed in the preview mode on a laptop with Ryzen. So if you are working with video, it might be worth taking a closer look at Intel models. Or hope that with the release of updates, the situation in this aspect will improve.

A few words should be said about the sound of ASUS ROG Strix SCAR 15 G533. This model is equipped with four speakers, which give a pleasant sound when watching movies or listening to music. There is support for Dolby Atmos technology. Not the level of MacBooks yet, but progress is noticeable.

Ultimately, ASUS ROG Strix SCAR 15 G533 is a top-end solution that copes with all tasks. It is comfortable to play, work too, the sound is pleasant, and the autonomy has become much better. At the same time, the body has become even a little more compact for all. But it should be understood that the cost of the updated Strix SCAR line is also rather big. If you do not have super tasks, you can take a closer look at more budget series, for example TUF, which is also equipped with NVIDIA 30xx video cards. The safety margin of such models will be boldly enough for a couple of years.