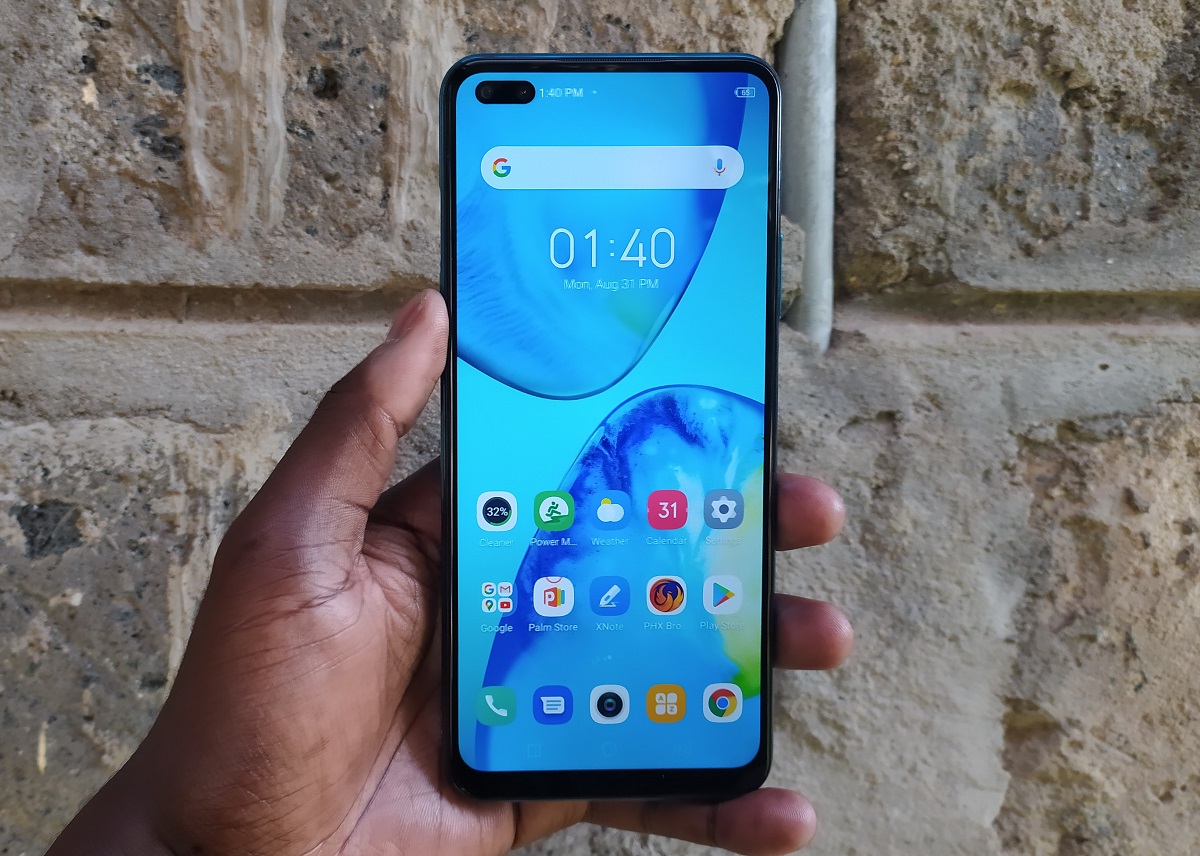 Infinix Note 8 is a smartphone with unusual positioning. With a base price of $ 230, this device offers a lower-level Mediatek Helio G80 platform, less RAM and a simpler camera system without an extended viewing angle. At the same time, Note 8 received a huge display – 6.95 inches. This is an obvious choice for fans of large screens, nothing even close to it in this parameter can be found. But this smartphone is not trying to attract a single screen.

The Infinix Note 8 is a smartphone with a more traditional design than the Zero 8, although it still has some common features. 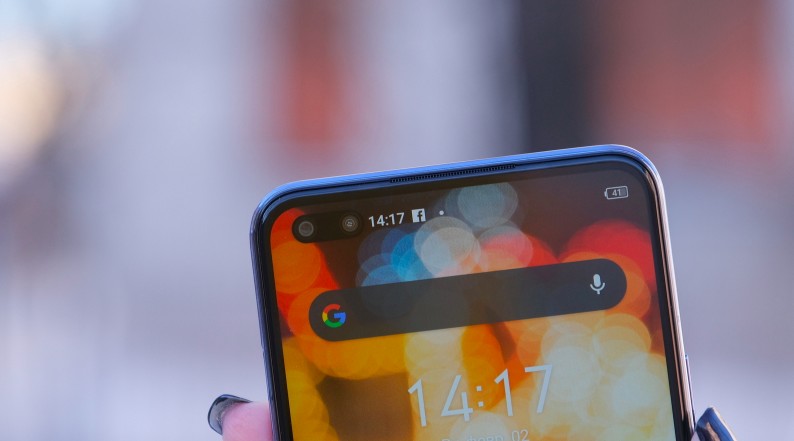 The bezel, for example, is indistinguishable. “It is indistinguishable in all modern smartphones,” you say, and you will be right … but not completely. Still, there are not so many gadgets with a double front-facing camera, also placed in an angular oval hole, and not in a cutout in the center. Note 8 and Zero 8 are such. Otherwise, everything is standard – minimal (but still noticeable) frames around the screen, which occupies 83% of the front surface. It is covered with flat tempered Gorilla Glass of an unnamed version. But on the back of the Note 8 from the common with the Zero 8 – only the inscription “Infinix”, and that one is unobtrusive, moreover, in a different place. Numerous cameras, together with a flash, are necessarily collected in a rectangular black block in the corner – no one here flirts with allusions to the Louvre.

The back panel is made of glossy translucent plastic, which looks much more like glass. Colors: gray, green and blue, as in our case. Ours also shimmers – depending on the lighting and viewing angle, the smartphone looks blue, lilac or pink. The gray and green variations are simpler in terms of overflows, but they can boast a geometric pattern on the back cover.

The smartphone is expectedly huge – 175.3 x 78.8 x 9 mm. It weighs 214 grams, in a pocket, especially if you hide the device in a case (included in the kit, silicone, transparent), it is difficult to fit. But you know, the sensations are about the same as those of modern flagships, which are also quite “body-positive”. This is another hefty smartphone, its dimensions no longer seem to be an anomaly.

The functional elements are quite ordinary: keys on the right side, ports and a speaker on the bottom, a slot for SIM-cards and a memory card on the left. The fingerprint scanner is located in the side button, which is responsible for turning on / locking the smartphone. The sensor in the form of a special notch on the rear panel finally goes into the category of relics of the past – for aesthetic reasons. The only thing that is allowed to occupy the back of the gadget (and soon, apparently, almost completely) is a multi-lens camera.

The button with the built-in scanner is implemented in the same way as in Zero 8. The button is slightly recessed into the body and placed in a good place – right under the thumb if you hold the smartphone with your right hand, and with your index finger if you are holding it with your left. However, the coverage area of ​​the capacitive sensor is small – if you’re lucky, it works quickly, but you’re not always lucky, the defect rate is noticeable, which, however, is typical for side scanners. But there is no problem with hypersensitivity when the smartphone is unlocked in the pocket by accidentally touching the case with your hand. A face identification system using the front camera is also available. It works very quickly and confidently (in Zero 8, by the way, I had problems with this – here none).

The operating system is the same as in Zero 8 – Android 10 with the XOS 7.0 shell. For a couple of months, the shell has not changed. This is a rather specific, but very functional software environment, which takes some time to get used to: application icons are taken in mandatory non-disconnectable frames, the status bar is partially inverted (time is on the left), there are a lot of unusual applications and non-standard settings, its own left screen with news and recommendations in the manner of Google Now, its own software store, a set of applications for optimizing the operation of a smartphone, a search system based on the device’s memory, which simultaneously navigates the current news trends (I wanted to find a quick game and learned about the hashtag “#denomata” – nothing interesting, by the way, it did not open when pressed).

By the way, the inclusion of a smartphone in the global agenda is also manifested by advertising – there is a lot of it in the shell, both in some basic applications and the very same search system, and simply in the notification panel; some advertisements even pop up on the home screen. It is this, coupled with the clumsy russification of the interface in places, that hinders XOS 7.0, otherwise it is a stable, fast and fairly convenient shell. Alas, support for a high refresh rate did not get here – the main advantage of the Note 8 display is its diagonal, otherwise its characteristics are not impressive.

The maximum measured brightness Infinix Note 8 was 382 cd / m 2 , the contrast – 1479: 1. The contrast for the IPS matrix is ​​excellent, but the brightness is not impressive. However, all matched competitors – at POCO M3, for example, brightness and all is 368 cd / m 2 . The seasons of dim displays have arrived. The Note 8 can be used in the sun, but not very comfortable.

Display settings – the required minimum: brightness (including adaptive brightness); mode “eye protection” with warm colors, which is appropriate to turn on before bed; dark theme, which carries only a decorative function on a smartphone with an LCD screen; font size; Well, and the “Pocket” mode, in which the sensitivity of the touch layer of the display is reduced in order to avoid accidental actions with it. You cannot change the color rendition.

The color gamut of the Infinix Note 8 display is close in area to the sRGB standard, but slightly biased. The gamma is within the normal range – the average value is 2.25, the curves are a little “naughty” in light shades. The color temperature is greatly increased – it mainly stays in the range from 8,500 to 9,000 K, with peaks up to 9,500 K and subsidence up to 7,500 (with a standard of 6,500 K). The average deviation of DeltaE on the Color Checker scale, which includes both a wide range of colors and shades of gray, was 6.66, while the norm was 3.00. The display is mediocre – the colors are much colder than they should be.

The sound capabilities of Infinix Note 8 seem to be quite standard: there is a mini-jack, Bluetooth 5.0 (as in the case of Zero 8, there is nothing to say about support for aptX and aptX HD, but the smartphone supports LDAC). However, stereo speakers are provided – they will not provide sound of some kind of transcendental quality, but some kind of stereo picture in combination with a solid volume on a smartphone of this price segment is very pleasing.

The Infinix Note 8 turned out to be a less versatile soldier than the Zero 8 – a smartphone with a fairly narrow target audience, but with striking features. First of all, it offers a screen of an unprecedented diagonal for its price, which in combination with stereo speakers makes the gadget a good choice for those who like watching Youtube and TV shows on the smartphone screen. Alas, a powerful application is not brought to the end – the screen lacks resolution and brightness, but everything is fine with contrast. Another strong point of the Note 8 is its surprisingly decent battery life. And in general, the hardware platform – you can be skeptical, but in fact the smartphone demonstrates the power and stability among the best in its class.