Smartphone for $180 with 6 GB of RAM and a 64 megapixel camera? Yes, it happens. Motorola has released a new model Moto G30, which may well compete with its Chinese counterparts. 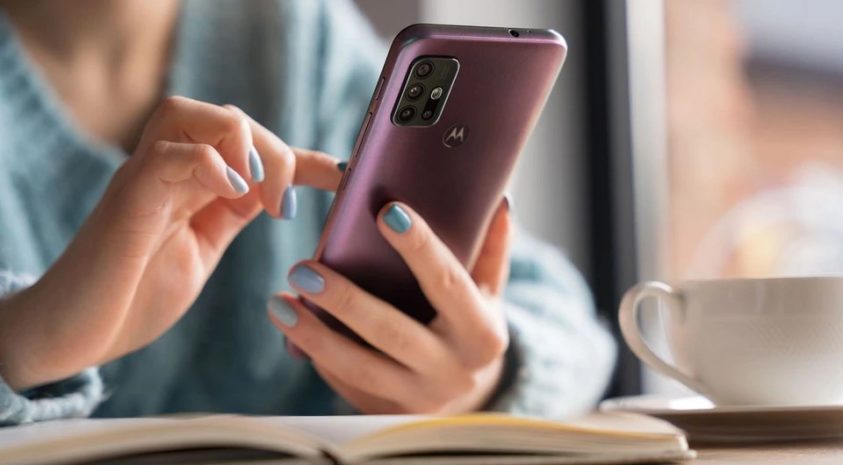 Smartphone manufacturers continue to amaze. Models with which it is quite “possible to live” cost less and less: now devices with 6 GB of RAM, a nimble Snapdragon 662 processor and a 64 megapixel camera are getting into the budget segment. More precisely, we just started to get it – we are talking about the new Motorola Moto G30, which we have just finished testing.

The Moto G30 looks quite attractive, although the bezels are too big by today’s standards, especially the bottom one. The front camera is inscribed in a neat blob, as in most inexpensive devices. The back panel is made of plastic and has an interesting coloring, the color of which changes depending on the angle of view.

What’s surprising is the rear-facing fingerprint sensor. Such a solution is used today mainly on budget models – in the middle class, the scanner is increasingly being integrated into the power button. It is very convenient: you take your smartphone in your hands, naturally touch the button with your thumb, and the screen is unlocked. Fortunately, there is another unlocking option here: via face recognition. Works quite accurately even with a lack of light.

All buttons are collected on the right side: on / off, volume control and one more that is responsible for calling the voice assistant. On the left is only a SIM card tray, hybrid. That is, you can use either 2 SIM cards, or a SIM card plus a memory card.

The IPS-matrix has already become the standard even for inexpensive smartphones. There is only one complaint about the Moto G30’s screen: the low HD + resolution (1600×720). On the 6.5-inch diagonal, it is quite possible to put up with it: the picture does not creep into pixels.

But as for the viewing angles and the correct display of colors – everything is fine with that. In addition, the screen has an increased hertz. More precisely, the user can choose between the standard 60 and 90 Hz, or entrust this choice to the AI.

Another would be to add a little brightness – it is not always enough on the street. To take a trivial picture on a sunny day, sometimes you have to cover the screen with your palm – otherwise you will not see anything. But let’s not quibble – in general, the display is here, as they say, for all the money. And they, as we remember, are asked for quite a bit.

The set of cameras here is rather typical for the middle class. The main one has a resolution of 64 megapixels and by default shoots at 16 megapixels with Quad Pixel technology. The 118 ° secondary camera is much more modest at 8MP. Two more cameras are a depth sensor and a macro camera, each with 2 megapixels.

However, pixels are, of course, not the main thing. If we compare pictures taken from the Moto G30 and one of the expensive smartphones with the same 64MP sensor, the difference will still be noticeable. Our hero shoots perfectly in good lighting, at most at dusk.

The smartphone runs on a relatively fresh Snapdragon 662 chipset. It was presented at the beginning of last year with a focus on the middle segment. In addition to the nimble SoC, the Moto G30 is pleased with the excellent storage of memory, both operative (6 GB) and permanent (128 GB). These characteristics allow you to run most modern games at least at medium settings. And twisting them up to high seems to be useless – the screen resolution does not dispose.

The device runs on almost pure Android 11. The menu is simple and straightforward, although there are some questions to it. For example, why hide a bunch of options in the screen settings in the drop-down list, if half of this screen itself is still empty?

Big batteries and good optimization have become Motorola’s trademarks lately. Even the humble Moto E7 Plus has a 5000 mAh battery, and the Moto G30 also uses a battery of this capacity. But unlike the model from the budget line, our hero is equipped with a 20 W adapter.

A full charge takes just over two hours. As for the autonomy, everything is classic here: if you are not using your smartphone very actively, it will calmly withstand two days. Games and gnawing apps like the navigator can make you look for an outlet much faster. By the way, we did not notice a noticeable difference when the screen was operating at 60 and 90 Hz, so you can not deny yourself the pleasure of using a higher frequency.

We can confidently say that the Moto G30 is worth its money. It is powerful enough for its price segment, with a good screen and battery. The amount of RAM is the maximum in this class. The thick bezels and the fingerprint sensor on the back are a little upsetting, but these are not all that bad.

The smartphone may be of interest to those who are tired of the dominance of Chinese models (although the brand itself belongs to the Chinese Lenovo) or simply does not want to use them in principle. He does not have any pronounced advantages that would play a plus in the competitive struggle.