As follows from the Mk II add-on, the Canon EOS M50 Mark II is the successor to the Canon EOS M50. This is a camera specially designed for vloggers or mixed use. Now, what was initially conceived as one model is turning into a whole line of MILC (mirrorless interchangeable lens cameras). While the M50 Mark II is marketed as an entry-level model, it packs a significant set of features.

Given the number of competitors in the entry-level mirrorless segment, what value will this new version have? And are there enough changes to justify the added cost over the “old” model? In the following Canon EOS M50 Mark II review, we will get acquainted with the functionality of the new camera and note its differences from its predecessor.

The Canon EOS M50 Mark II is an almost exact replica of its predecessor, the Canon M50 . The buttons on the back of the M50 II are the same. They are well-positioned, well-labeled and well-arranged so that there is mostly room for the LCD. The four-way joystick is very easy to use, especially thanks to the tabs on each of the four sides.

The M50 II’s mode dial isn’t as loaded as the M6 II’s , but it does have a solid array of options. One switch, two dials and three buttons fit into a compact space to the right of the EVF and pop-up flash. The Canon M50 II again gets a power switch instead of a button.

All models from the entire current Canon EOS line (as well as most of the discontinued ones) have very good build quality. Even the cheapest models look great. The construction is always tight, with responsive dials and buttons. As usual with EOS models, Canon ergonomically rounds off most of the camera. Grip spots are especially free from sharp corners.

The EOS M50 Mark II inherits the same image sensor as many other modern Canon APS-C cameras. This is a positive feature as it is a great sensor and Canon uses mass production for the economy that everyone appreciates. The effective megapixel count of the M50 II is 0.1 less than that of the M5.

The reason for this change is that some pixels have taken on a supporting role and are used for other purposes such as autofocus. 24 megapixels have become Canon APS-C standard resolution, and this resolution is very high. We expect the Canon M50 II to have the same image quality as the M5, M6, M100, 77D, 850D , etc. due to the identical image matrix.

These are face tracking with tracking, zone autofocus (no longer Smooth Zone AF or FlexiZone Multi) and single-point AF (not FlexiZone Single). On recent and previous models, all focus modes work very well, and (human) face tracking, combined with the ability to influence which face is selected, is particularly impressive.

The AF area coverage in older Dual Pixel AF implementations was approximately 80% of the frame with 49 AF points available. New with the EOS M50 was that with some lenses, approximately 88% of the frame horizontally and 100% of the vertical frame can be used for autofocus, along with 143 individual AF points.

More points and more coverage means less reframing is required and the AF point can be held on a subject closer to the edge of the frame for quick shutter release or for tracking motion in smart tracking mode. The autofocus system of the M50 Mark II impresses with its EV range of -4… 18.

By touching the LCD monitor and dragging, you can very quickly change the position of the active AF point based on the touch point on the LCD monitor (or a selected part of the LCD monitor). The speed of use provided by the touch-and-drag AF function is excellent. Overall, the Canon M50 II’s autofocus system is a huge asset.

The M50 Mark II shoots at up to 7.4 frames per second. Buffer depth is marginally improved over the M50 – the camera can capture up to 47 JPG images in burst at nominal speed. The RAW image buffer capacity is up to 10 shots. Real world results will vary slightly as memory card speed matters.

The M-series cameras are very quiet to use, but the M50 II promised to open up new horizons with its completely silent mode. In Wide Aperture Silent Mode, you will only feel a slight click of the shutter release and see the white frame blinking quickly on the LCD. This feature is a huge advantage for photographers who want to shoot discreetly.

Although the parameters have not changed here, they are generally standard for this segment. It would be nice if Canon pushed the boundaries of video capabilities, but unfortunately this will have to wait. Like the M50, 4K footage is sharp enough with nice Canon color reproduction. The camera supports a standard recording limit of 29 minutes and 59 seconds.

The EOS M50 Mark II supports vertical video with added metadata for correct vertical playback on smartphones. It now offers auto-capture video with touch-sensitive recording controls. Those. you can set a countdown timer and then touch the screen to start recording.

There is a 4K frame grabber that allows you to extract stills from 4K clips. There is also a pure HDMI output for use with external recorders or monitors. And that makes the camera a reliable option for live streaming.

What are the downsides? Shooting in 4K has several serious limitations. First, she still has a high crop, which is now 1.5x instead of 1.6x. The number of effective pixels is reduced to 8 million, which significantly reduces the resolution and changes the field of view. Combined, this equates to 2.4x total crop at 1080p FHD. 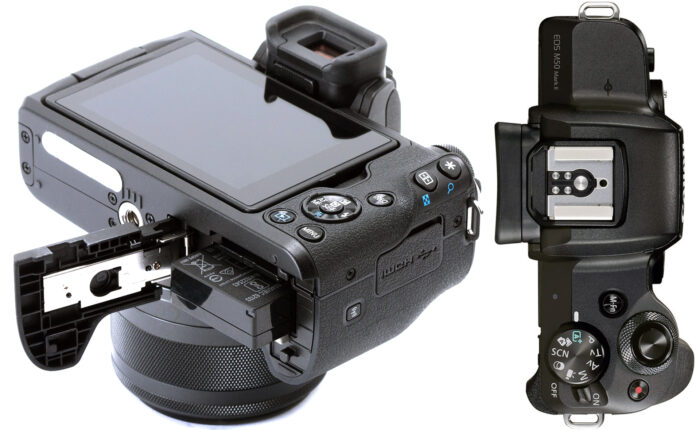 Second, the EOS M50 II still suffers from rolling shutter effects, especially in 4K. This distortion is much less at 1080p, but you have to be careful when panning. Finally, 1080p and 720p video quality remains below average. The videos are soft, noisy and suffer from moiré like their predecessor. It lacks advanced video features such as zebras, Log profiles and 10-bit recording.

The camera is equipped with an OLED electronic viewfinder with a resolution of 2.36 million dots. This is a very good display. It’s crisp, vibrant, and colors accurate.

Differences between M50 II and M50

The original M50 was already a great starter camera and Canon’s most popular camera for this audience. Considering that the new product retains the vast majority of its features and an affordable price, it is just as well suited to beginners.

The only minor doubt is that the EF-M lens lineup remains limited and Canon continues to neglect to create this collection. And the 4K resolution on this camera seems purposefully limited. Therefore, this is not exactly the right choice if you are looking for a versatile camcorder. However, it is a good option and offers the same features as the more expensive 80D DSLR.

Advertisement
X
Subscribe to get the best Tech news and reviews of the week.
By signing up, you agree to our Privacy Notice and European users agree to the data transfer policy.
Close
03/17/2021