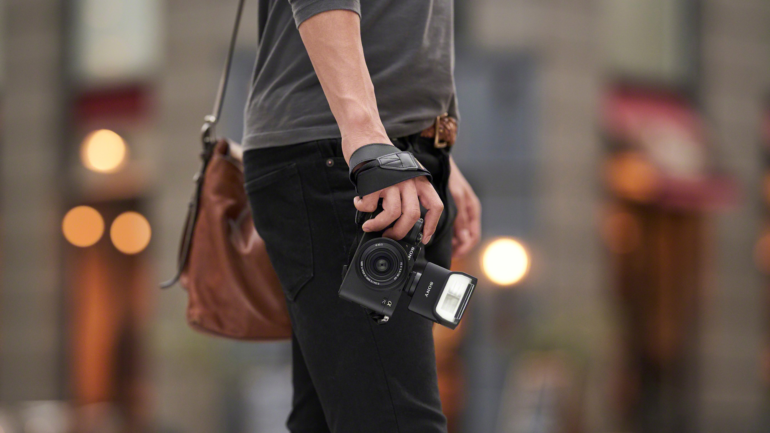 Sony A7C cannot be called a fundamentally new or breakthrough model. Almost all of its functions and characteristics have previously been found in other Sony Alpha cameras. Here they are simply very well assembled in a compact body.

The full-frame 24MP CMOS sensor is very similar in performance to the one we saw in the  Sony A7 III . An excellent back-illuminated sensor and, as a result, high working ISOs, which is by no means outdated at the moment, despite being used in the previous model.

The matrix is ​​mounted on a stabilized suspension. It provides five-axis stabilization, compensating for angular jitter of the transverse and vertical axes often seen in telephoto lenses, linear shifts when shooting from close range, and rotational jitter of the optical axis when shooting handheld. The efficiency of the stabilizer is five steps.

The combination of the matrix and the BIONZ X processor provides a very high speed of work. Maximum continuous shooting speed up to 10fps at full resolution. Autofocus is able to find the eyes of people or animals in the frame, to keep moving objects in focus.

Video shooting is the second specialty of the Sony A7C after photography. The maximum resolution is 4K (3840 × 2160) at 30 fps, and in Full HD up to 120 fps is available! The camera is largely focused on the blogging style of shooting. Fully rotatable touchscreen allows you to film yourself. Confident autofocus for faces and eyes makes it possible to forget about manual settings and not worry about the result. Small shaking is removed by the stabilizer, which we have already mentioned. You can use an external microphone and headphones with the camera. Even the Sony A7C’s video recording button has been moved to the top panel and made large enough for greater convenience.

When you first meet the Sony A7C, there is something to surprise its owner, especially if he already has experience in shooting with cameras of this class. The first is size. Without a lens, the full-frame Sony A7C is just slightly larger than cropped models with an APS-C format sensor. It weighs only 509 g with battery and memory card. At the same time, no compromises were made in the design. The case is metal, protection from moisture and dust is in place.

Even the electronic viewfinder found a place on the body. Let it become smaller than that of other full-frame mirrorless cameras of the brand (it uses a sensor of the 0.39-type type), but the resolution remains high – 2.36 million dots. It is not always comfortable to work with it all the time, but when shooting in the sun it is a great helper.

We charge the battery before going to the shooting. It’s huge here. This is the same NP-FZ100 battery found in the manufacturer’s top-end cameras. The battery takes up almost all the space in the grip of the camera, and its full charge is enough for 740 frames – according to official figures. With moderate daily use, we charged it about once a week. No special charger is required, you can simply connect the camera to any USB source, up to a power bank or an outlet in a subway car. Power and charging is possible even while shooting. Finally, insert the USB stick. Sony A7C works with a single SD memory card. Supports UHS-II type and large capacity cards.

When the battery is charged and the flash drive is installed, you can press the button and take your first photo with a new camera! The dry and quiet sound of the shutter pleases the ears of the photographer. There are no delays in work. Burst shooting is just a machine gun. Autofocus is so fast that it is difficult to find a subject that would cause difficulties for him.

There is no need to set the AF point manually, the automation does it on its own. The camera recognizes faces and eyes perfectly. In the menu, you can choose who you shoot: people or animals. With four-legged Sony A7C also knows how to work. Turn on continuous AF-C focus mode and just shoot. Autofocus does its job stably and accurately.

If you need to tell the camera exactly where to focus, just touch the screen. It supports a limited number of touch functions and does not work, for example, in the menu. But it is very convenient to select the AF area with its help.

The stabilizer, which we have already mentioned, turns out to be a very useful thing in practice. You need to use it wisely. For example, if you are shooting still lifes or evening landscapes, you can choose a slower shutter speed in the ISO settings for the auto and semi-auto modes. The result is a low ISO when shooting handheld even after sunset. Exposures of the order of 1 / 10-1 / 30 s the stabilizer fulfills confidently. You can safely leave the tripod at home. Optical stabilization also protects against accidental blur, for example, when shooting on the go.

The Sony A7C  does not pretend to be a professional camera, although it can cope with many tasks of commercial photography. Therefore, you will not find a separate joystick on the rear panel for selecting autofocus (this task is easily solved by a touch screen) or a front control wheel (and its functions are quite capable of performing a multifunctional joystick disc). The Sony A7C has quite a few buttons at all. And yet, after a couple of days of shooting, you catch yourself thinking that this minimum is quite enough. You have to get into the menu only at first, and then you simply adjust the camera to your style. As with the entire Sony Alpha line, there is a tremendous amount of customization!

Using the Imaging Edge application, shooting can be controlled remotely from a smartphone, transferring images and videos to it. It is also possible to remotely control from a computer and even transfer captured files to an FTP server via Wi-Fi, which can be useful for working in a studio.

The Sony A7C  is a full-frame camera, which means photographers can count on very high image quality. 24MP is the gold standard for resolution when detail is enough for large prints, and the large size of each pixel allows for low noise. Up to ISO 3200, you can forget about noise altogether, it can only cause trouble at ISO 6400 and above. The ability to shoot in RAW provides great flexibility in processing, allows you to realize a very wide dynamic range.

The second advantage of the full-frame sensor is the ability to shoot with a blurred background, especially when using a fast lens. There are a lot of E-mount optics on the market, you can choose for every taste and wallet.

The Sony A7C combines high quality photos with powerful video capabilities, compactness and simplicity. All the necessary functions that you can think of are implemented in it, because it borrowed most of its functionality from the older models of the Sony Alpha series. Built-in stabilization system, excellent autofocus on the eyes of people and animals with tracking moving objects, high burst shooting speed, wide video shooting capabilities – all these are the strengths of the Sony A7C.