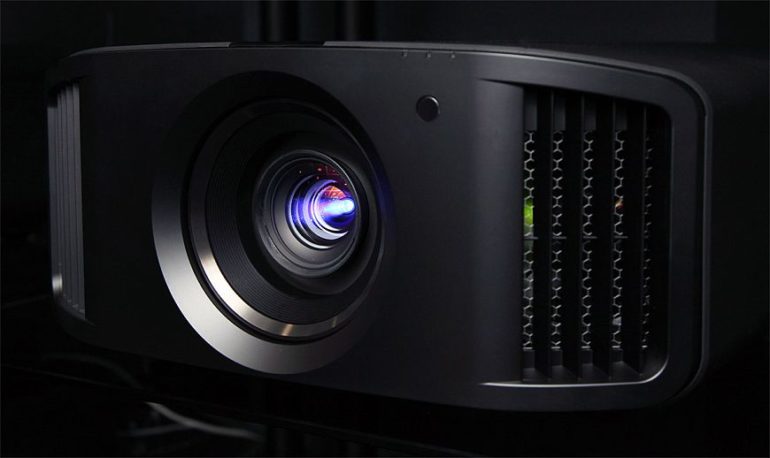 Today we have the opportunity to get to know the JVC DLA-NZ8 projector, which occupies the middle position in the brand hierarchy.

If the top model of the JVC cinema projector series at first glance can be distinguished by a larger lens (the lens of the bigger model uses glass lenses with a diameter of 100 mm, and the rest use 65 mm), then the projectors standing next to each other DLA-NZ7and DLA-NZ8 look like twin brothers.

Only after looking closely, you can notice that the logo of the proprietary optical image shift system is applied on the top wall of the case, with the help of which 8K image resolution is achieved when using D-ILA matrices with native 4K resolution. The NZ7 has 8K/e-shift on the back, while the NZ8 has 8K/e-shiftX. No more external differences between the projectors could be found, which does not mean at all that they do not exist.

First of all, the bigger model provides more luminous flux – 2,500 lumens instead of 2,200 for the DLA-NZ7 projector. No less, and perhaps more significant difference was the static contrast – for the DLA-NZ8 model, the manufacturer claims a value of 80,000: 1, while the contrast ratio of the younger projector is half as much – 40,000: 1.

Only these two differences are already promising the JVC DLA-NZ8 projector has better image quality, but the 8K/e-shiftX optical shift system mentioned above also contributes to the result. The latest version of the system with the X suffix is ​​currently implemented only in two bigger models of the line – JVC DLA-NZ8 and DLA-NZ9. 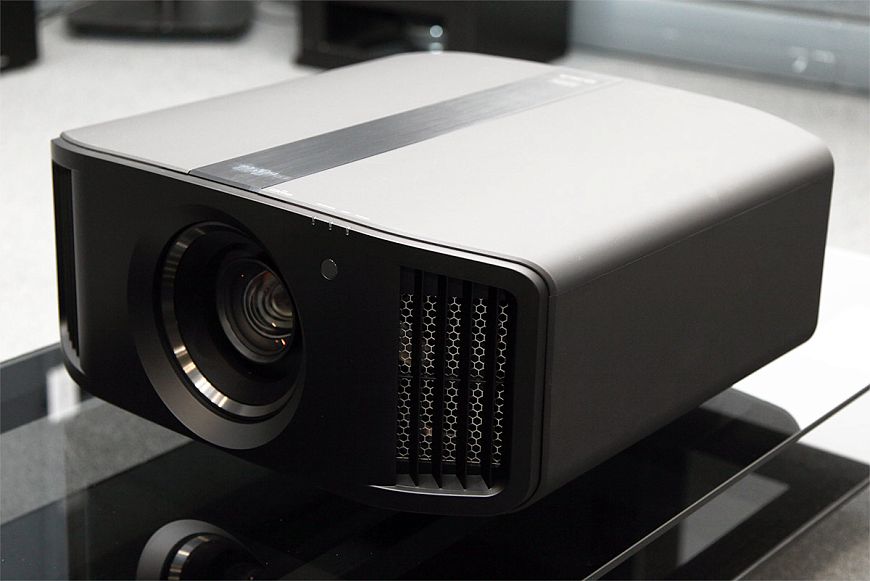 If in the previous version without X the image was only shifted diagonally by half the pixel size, then in 8K / e-shiftX the image is shifted left and right and up and down. That is, each frame does not consist of two half-frames, but of four components. This allows you to achieve greater image density and make full use of the information encoded in the 8K signal. 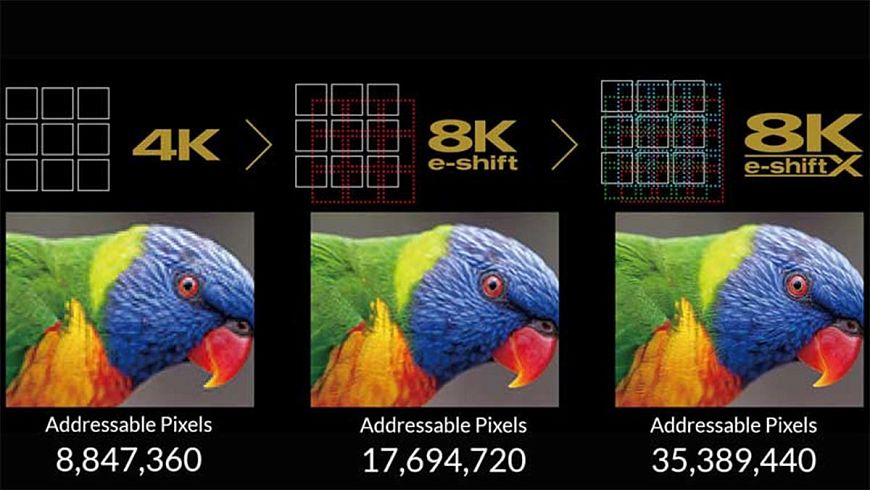 Otherwise, the principles underlying the image shift technology are similar. Here, the ability of the visual apparatus to integrate several successively displayed image components into a single whole is used – if only the rate of change of such “semi-frames” was above the sensitivity threshold. The same feature is used in single-chip micromirror projectors to form a full-color image – only there different color components are sequentially displayed on the screen.

But if the DLP technology for forming a color image for some sensitive viewers gives the well-known “rainbow effect”, when the eye manages to distinguish these components and perceives it as a “scattering” of the picture, then similar problems cannot arise here in principle. 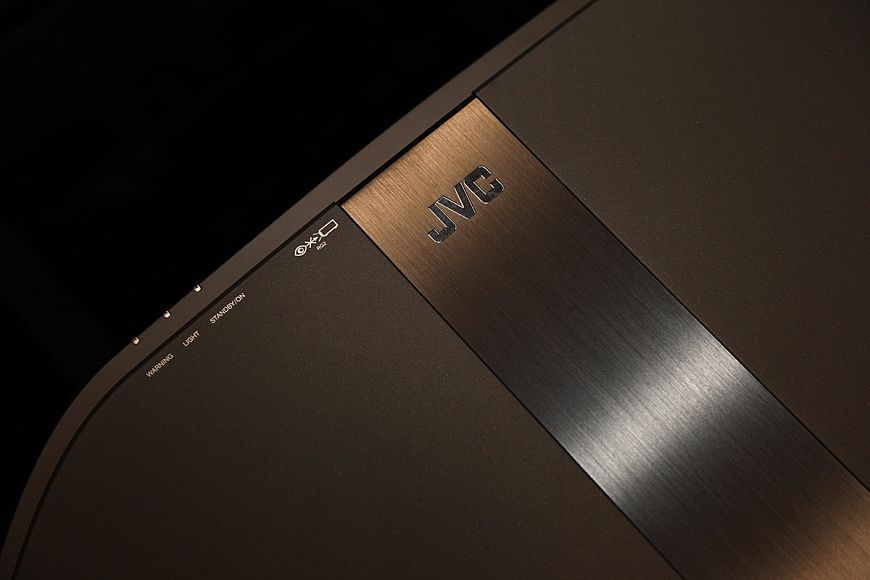 The JVC DLA-NZ8 projector, like the other two models of the NZ line, is based on the new BLU-Escent laser phosphor light source, which has become more compact and less demanding on the efficiency of the cooling system than the source of the first JVC laser projector with the DLA-Z1 index. This allowed the new projectors to be released in the same housings as the N-series models using high-pressure lamps. 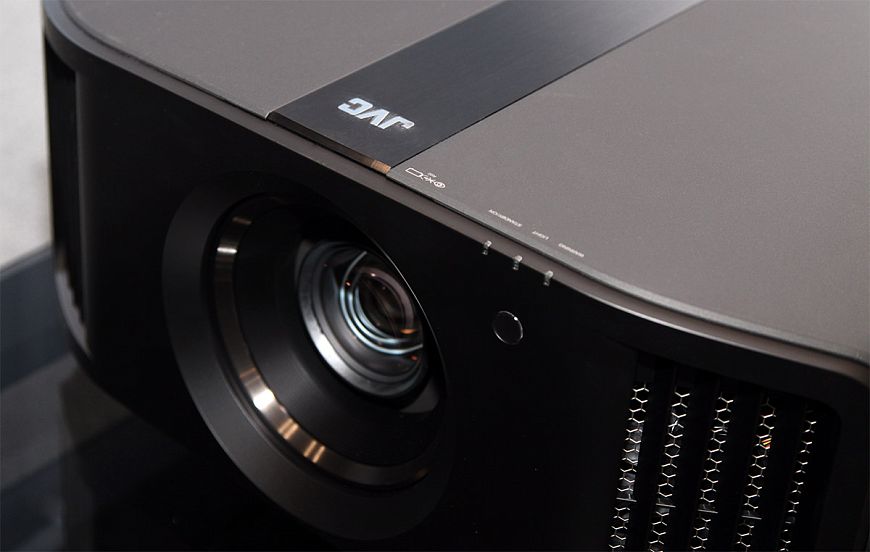 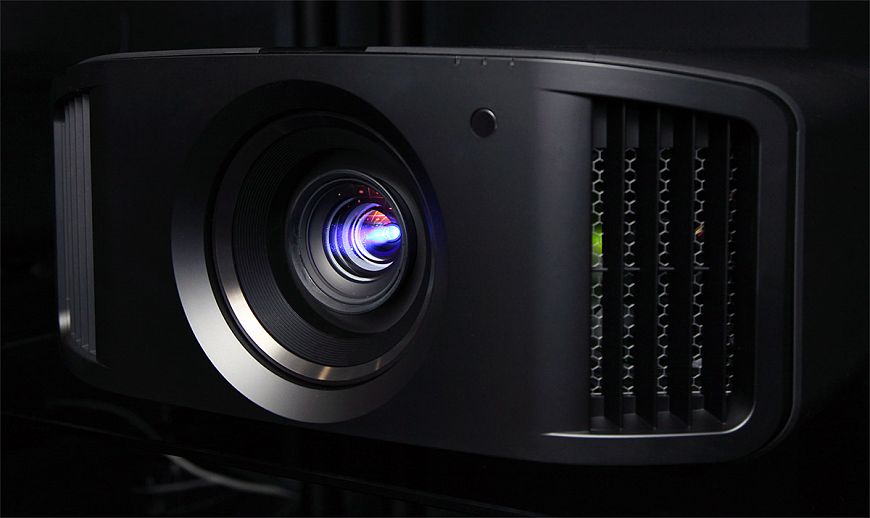 The laser source provides coherent radiation, that is, it preserves the phase difference of light waves in space over time. Thanks to this, the color palette looks more natural and saturated. In addition, compared to the usual high-pressure projection lamps, the laser light source is practically inertialess, that is, it allows you to quickly change the luminous flux if necessary. Thus, in laser projectors, to increase the contrast of the picture, you can do without using the lens aperture. 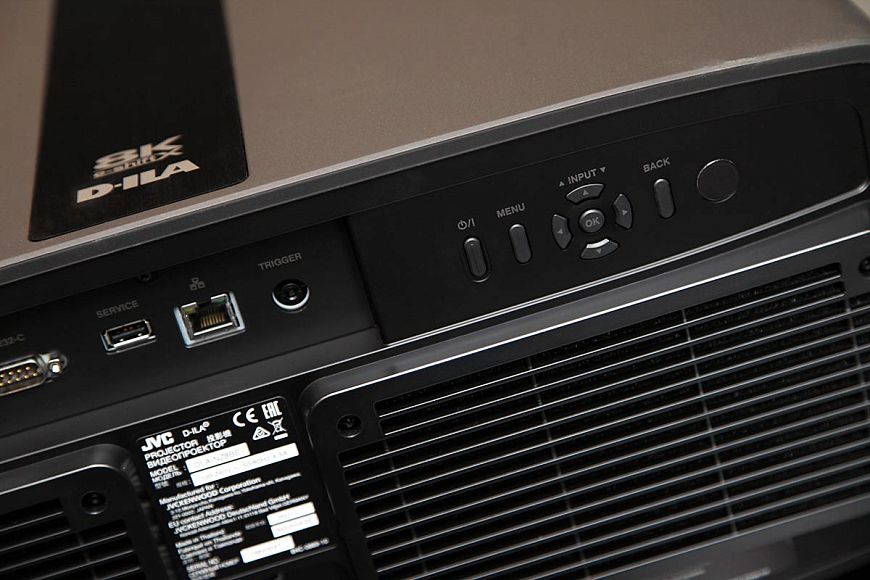 Another advantage of a laser light source over a high-pressure lamp is a significantly shorter time to reach operating brightness when the projector is turned on and there is no need for intensive cooling after turning it off, which increases the usability of the device. And, finally, one of the main trump cards of the “laser” was a significantly higher resource. For a projection lamp, the resource in most cases ranges from 2 to 5 thousand hours. 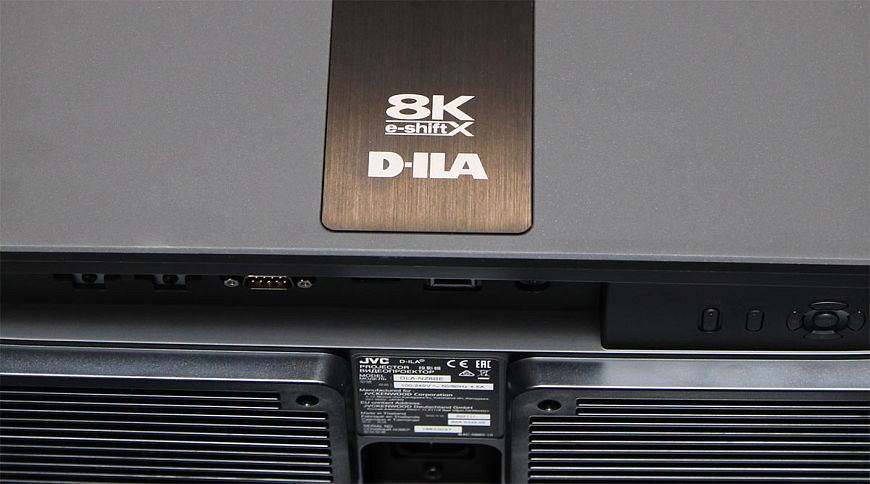 The JVC DLA-NZ8 projector uses three proprietary 0.69-inch native 4K (4096 x 2160) D-ILA sensors that debuted in JVC’s previous line of D-ILA home theater projectors. Recall that the D-ILA technology is based on proprietary LCoS (Liquid Crystal on Silicon) liquid crystal matrices that work on reflection, and is supplemented by a system of polarizers developed by JVC.

It is D-ILA technology that allows JVC to be at the forefront of home theater projection technologies for many years and provide record native (without the help of artificial techniques such as automatic lens iris) picture contrast, which is already perceived as the norm for company projectors. 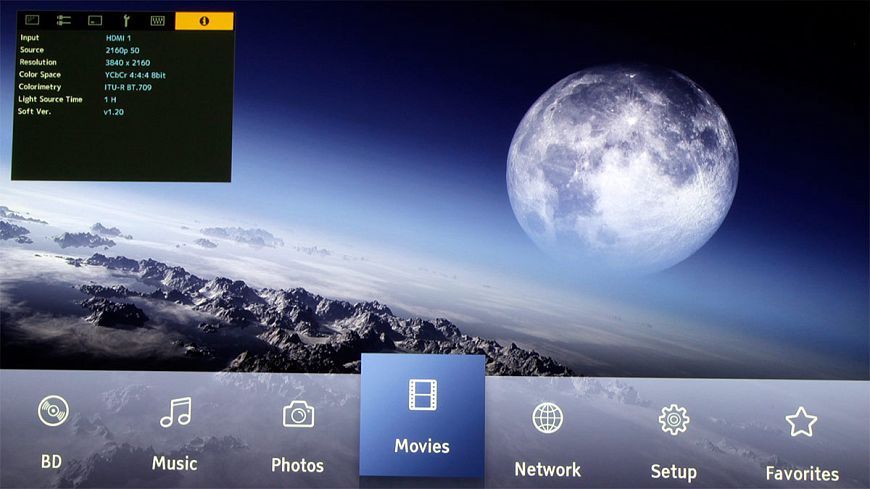 The JVC DLA-NZ8 projector is equipped with the same optical system as the junior model NZ7 (the top model NZ9 has a different lens). The lens with the highest optical resolution, which is capable of unleashing the full potential of 8K video, consists of 17 elements in 15 groups with 65 mm glass lenses (the top model NZ9 has 100 mm, 18 elements in 16 groups). The optical system is equipped with servo drives and allows image shift both vertically by 80% and horizontally by 34%, which greatly simplifies both the choice of the projector installation site and the positioning of the image in the screen. 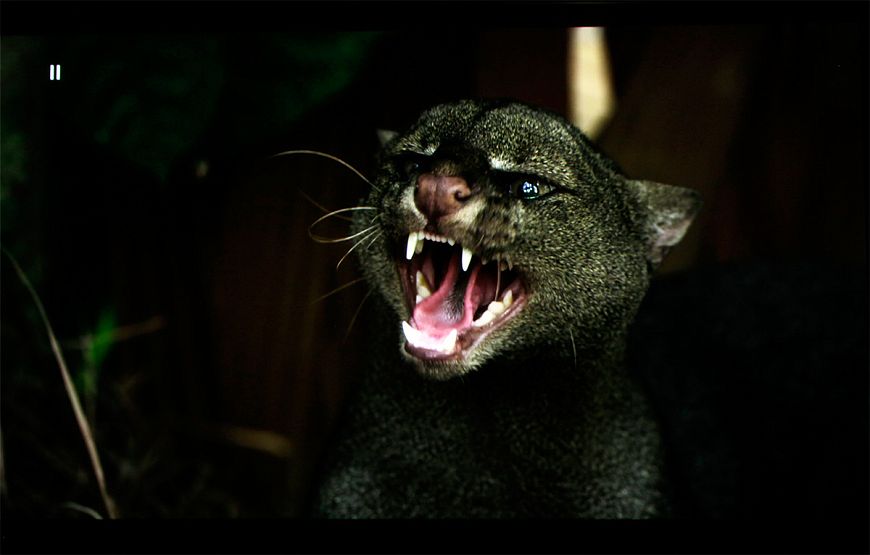 One of the significant differences in the new series of JVC cinema projectors is that all laser models of the NZ series are equipped with HDMI version 2.1 ports that support HDCP version 2.3 licensed content protection technology. This puts JVC back at the forefront of technological innovation with the NZ series becoming the first home theater projector capable of receiving 8K/60Hz and 4K/120Hz video from external sources.

The processor platform here is the same as in other models of the NZ series – a powerful video processor of its own design is able not only to qualitatively scale video of any resolution up to 8K, but also offers a whole arsenal of digital processing designed to improve the quality of video playback.

Among them are the motion processing technologies Clear Motion Drive and Motion Enhance, which compensate for blurring and blurring of objects when they move dynamically in the frame, as well as Auto Tone Mapping, optimized for working with video in HDR10+ format. Like the younger model, JVC DLA-NZ8 supports 3D video playback, however, to implement this feature, as usual from JVC, you will have to additionally purchase a branded 3D radio transmitter PK-EM2 and RF 3D glasses PK-AG3 in the required quantity.

Testing of the JVC DLA-NZ8 laser cinema projector took place in a completely darkened showroom of the Russian exclusive distributor of JVC products, Digis. The role of the source, as usual, was played by the universal player OPPO UDP-203. The image was projected onto a 130-inch Stewart white screen. 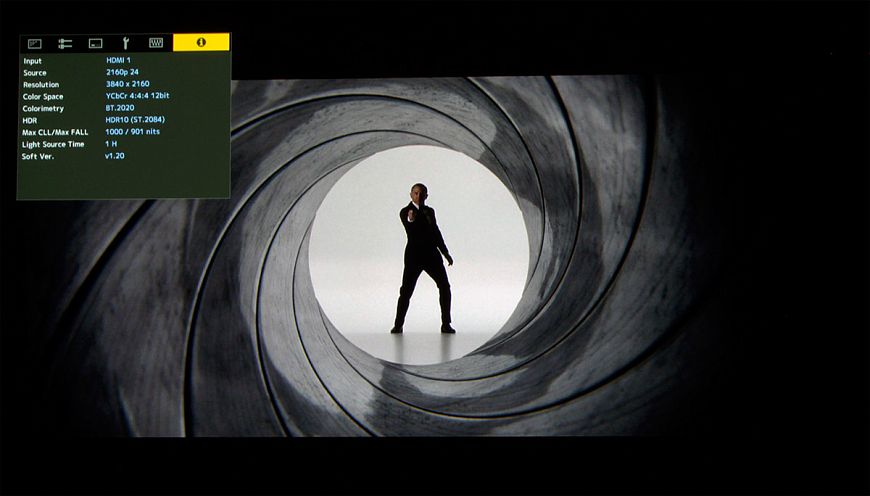 The first impression when turning on the JVC DLA-NZ8 projector was similar to that that arose at the beginning of testing the younger model with the NZ7 index – a very low level of stray black field illumination immediately attracts attention. Moreover, now we are not talking about dark areas of the frame, but about “technically” unused fields – for example, when projecting a frame with an aspect ratio of 21:9 onto a 16:9 screen.

In this case, black stripes form at the top and bottom of the picture, which often turn out to be not completely black, this is especially noticeable in a cinema hall with absolute blackout and minimally reflective walls and ceiling. And in the case of JVC laser projectors from the new NZ series, these areas remain almost completely black.

This was demonstrated by the junior projector DLA-NZ7, we are seeing a similar result now, which, however, was quite expected – after all, the static contrast ratio of the DLA-NZ8 is twice as high as that of the younger model. In addition, the optical systems of these two projectors are very similar – to increase light transmission from the glass and minimize light loss due to reflection, the inside of the lenses is coated with a special composition. In addition, individual lens groups have been replaced in the new projectors, resulting in a significant reduction in stray light. 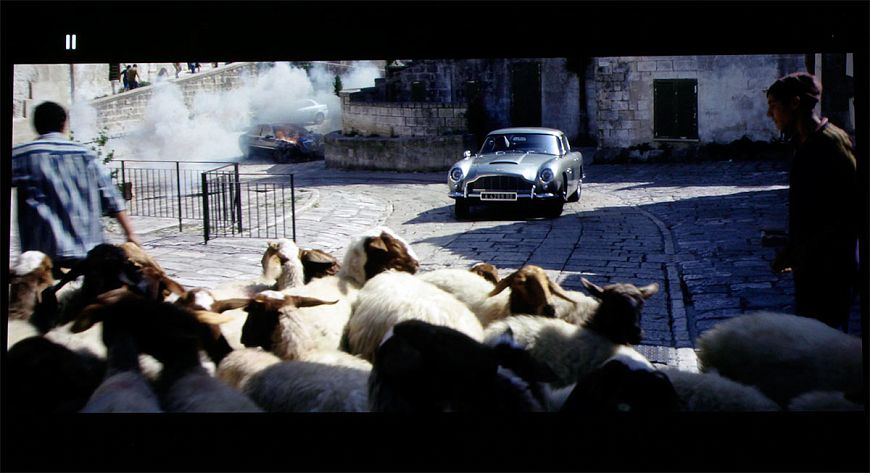 The higher contrast of the DLA-NZ8 projector is fully manifested in real film footage. In low-light scenes, which are common in the UltraHD Blu-ray movie Passengers, even the darkest parts of the frame were meticulously crafted to bring the picture to life and dimension. The GPU was powerful enough to smoothly play the most dynamic scenes and scale 4K material to 8K quality, and such a high resolution provided a dense and detailed picture, devoid of a hint of pixel grid even on a 130-inch screen. After testing the DLA-NZ7 projector, it was difficult to imagine what improvements bigger models could offer. And if the top projector DLA-NZ9 is equipped with a lens of a significantly higher level, which, of course, should affect the quality of the picture, then with the average DLA-NZ8 model, everything was not so obvious. Nevertheless, the task of improving the almost ideal result by JVC has once again been excellently executed.

Positioned in the middle position in JVC’s line of 8K laser home theater projectors, the DLA-NZ8 lays claim to the status of the sweet spot by offering greater picture brightness, substantially higher static contrast ratio and an innovative 8K/Optical Image Shift system than the entry-level DLA-NZ7. e-shiftX, which makes 8K images even more impressive and detailed. At the same time, we managed to offer a significantly lower price in comparison with the top DLA-NZ9 projector. 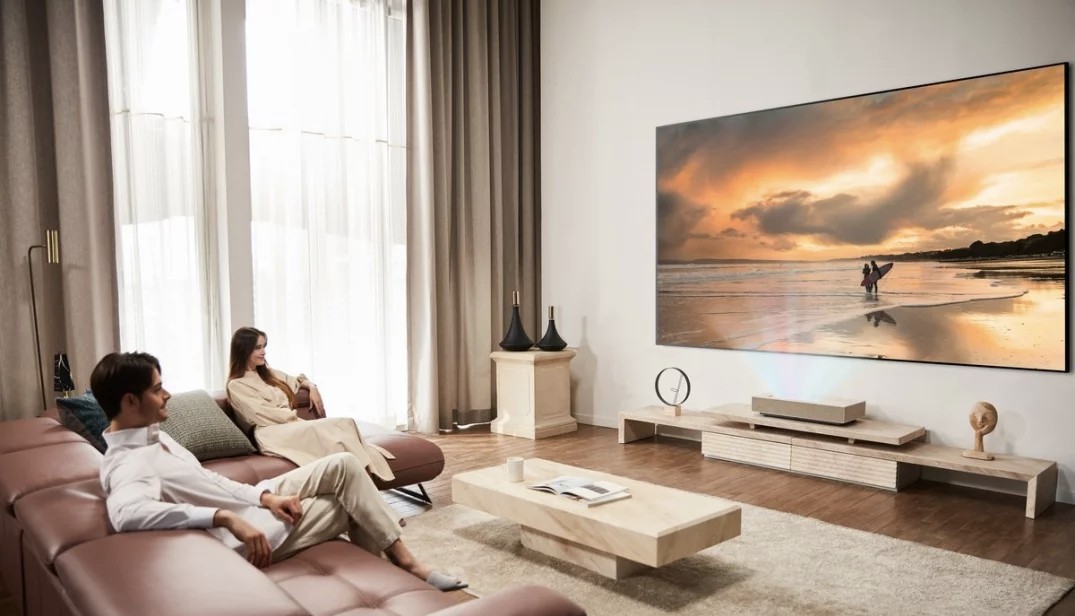 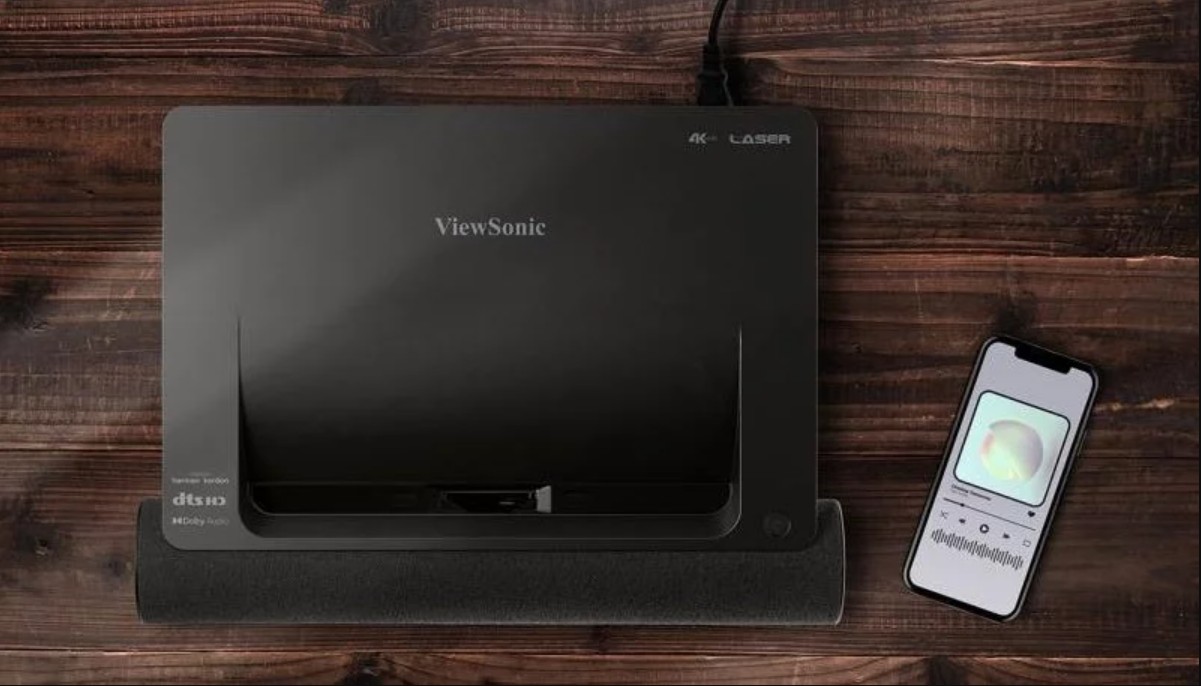