JVC LX-NZ3 Review: Everything looks perfect with this projector Not surprisingly, the success of JVC’s first DLP projector for DC – the LX-UH1 – so unlike the company’s classic D-ILA models, was absolutely natural.

The company has made a name for itself on the release of high-quality projectors: high-contrast, good color rendering, high definition and detail. But there were no inexpensive models in its line, and competitors tried to fill this niche, but the quality gap with most of them was so great that they still did not fill the resulting niche – the demand for inexpensive models with natural color rendering remained.

In addition, a whole layer of buyers has formed who – with all due respect to JVC’s merits in achieving incredibly deep blacks – prefer a brighter and brighter picture that does not fade under a little ambient light. Because the company’s classic D-ILA projectors – especially modern ones – require complete dimming in order to realize their full potential.

In general, the LX-UH1 came to the right place, and the company decided to build on the success, presenting a brighter model – JVC LX-NZ3.

Laser is the head of everything

The new projector is exactly twice as expensive as the company’s first DLP model, but the demand for it turned out to be even higher – people made an advance payment, although there were no reviews yet. The reason for this is the magic word “laser”, or rather the proprietary laser-phosphor light source BLU-Escent, an analogue of which JVC uses in the top model DLA-Z1. It is an analogue, because in DLA-Z1 the phosphor plate, which is illuminated by lasers, is stationary, and in JVC LX-NZ3 it rotates – that is, it is a phosphor wheel. This makes it easier to cool and the entire assembly can be made more compact.

Actually, therefore, with the same rated luminous flux of 3000 lumens, the new model remained as compact as the LX-UH1. Outwardly, it generally looks like a complete clone, but this is not entirely true. It has a different front and top panel, the control buttons and the IR receiver window are located a little differently, and there are a couple of very minor differences.

Why they were introduced (since, in general, little has changed) is difficult to say, but you can see that such a step is quite in the spirit of JVC’s policy – the company never tried to highlight its more expensive models with the help of design, it often uses unification details, but highlights the main, strategic differences, because they affect the image quality.

As a result, the new projector got the same optical system with a wide-angle lens that can move in two directions – and with a fairly wide range. The picture can be shifted vertically by 60% of its height, and horizontally by 23% of its width, which is usually found only in expensive micromirror projectors.

The lens itself is with polycarbonate lenses, but it is decidedly impossible to find fault with its quality: there is no trace of aberration and stratification into the spectrum along the pixel boundaries, and the sharpness at the edges of the image in comparison with the center falls very slightly. The pixels remain clearly visible, but they can only be seen from very close range and only on screens with smooth canvas.

Naturally, the connectivity remains the same. There are two versions of HDMI ports to choose from: v2.0 with HDCP2.2 for 4K video sources and v1.4 for compatibility with older players, which sometimes get buggy when connected to newer devices due to a poorly written compatibility protocol.

There is even an analog VGA input for connecting old computers, although it most likely went to the projector just to load with the input portals board. By the way, it has a USB type A connector, which is not used to connect disks or flash drives, but to power wireless HDMI adapters.

Finally, the main detail that unites the novelty with the LX-UH1 is the matrix, or rather, a 0.47-inch chipset consisting of a Full HD-resolution DMD matrix and an XPR optical actuator that shifts the matrix image by half a pixel diagonally. Together they form a 4K image.

True, unlike the e-shift system, which was used on JVC X-series projectors, here the micromirror matrix creates four half-frames, and the actuator deflects them in two directions, but they do it even faster, so for the viewer the image becomes not only a single one, but also more stable and clearer than when using e-shift. This makes this projector related to other DLP models on a similar assembly. 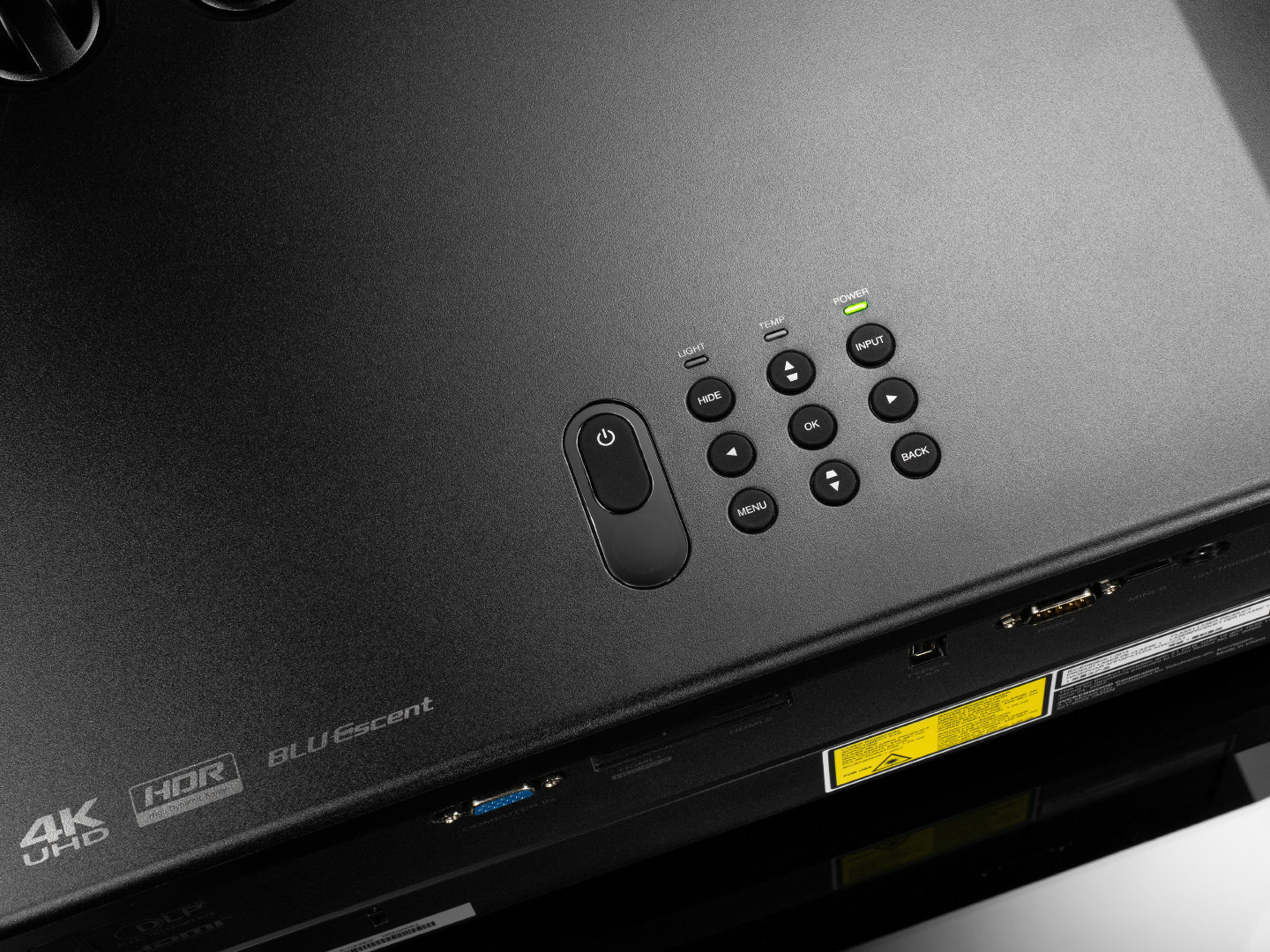 But JVC would not be itself if it did not contribute to the formation of the image. Unlike most models on the same chipset, here you can turn off the optical conversion to get a Full-HD image on the screen. Everything is for the sake of customer wishes!

The projector can upscale any video to 4K, and it does a pretty good job. But no matter how perfect the algorithms for this scaling are, there is video material on which they will create errors, because the processor, in fact, draws some details of the image.

On a detailed Full-HD video, everything happens perfectly, but on a compressed and not cleared of artifacts – the algorithm can simply increase these artifacts. For such a video, the “e-shift off” mode is intended, in which scaling does not occur, and a bad video remains, at least, watchable.

However, I am sure that after buying such a projector, most of the time you will want to watch 4K movies, and certainly with HDR – especially at first. The projector officially supports HDR10 and HLG formats, but in fact it also performs tone mapping for videos with dynamic data – provided that they are taken into account by an external player.

For example, the film about the Hotel El Royale with HDR10 +, played on the OPPO UDP-203, was displayed as it should – with bright sunny scenes and dazzling white highlights on the chrome of the cars, as well as dark night shots, but without black filling on the half-screen. Movies with Dolby Vision are similar, although not quite the same as the more expensive models of the company.

However, formally I did the same with HDR and LX-UH1. But the JVC LX-NZ3 has a brighter picture in every sense, and this is noticeable at first glance. When completely darkened, the usual, that is, a simple white 130-inch screen, is not enough for it – it illuminated a larger 145-inch one with a margin of safety, with a sound-transparent canvas and a reflection coefficient of 0.7, showing a shining picture.

When you watch documentaries like “Planet Earth” or tapes filmed, you catch yourself thinking: “If only all the projectors show it this way – everything is served really brightly.” JVC engineers set up the projector so that, unless you specifically look at scenes with taiga or dark jungle, you can’t see the lack of colors, which is registered by the sensor in the green part of the spectrum, even on such materials. Everything looks decidedly perfect.

In dark scenes, black looks lightened, but this is inevitable. On the other hand, the door that opens into the hall or the ambient lighting on the chairs has almost no effect on the general character of the picture – it does not fade instantly, as is the case with high-contrast projectors that demonstrate perfect black. And this is a definite plus for those who are not accustomed or do not want to get used to complete blackout when watching a movie. And in fact, these are the majority.

In addition, there are already quite a few people who are not impressed with home screens of 100 inches diagonally, because there are already TVs of the same size. They want scale – like in a large, commercial cinema – and are ready to put up with the fact that instead of a screen there will be a prepared wall four meters wide, but they are not ready to buy projectors for three million to cover it. For them, the JVC LX-NZ3 will be the ideal option.

All measurements were taken in the Digis showroom, so the absolute data can be directly compared with other JVC models. The screen for the initial setup was used with a reflectance of 0.7 and a diagonal of 130 inches. The room was completely darkened. In order to exclude as much as possible the influence of the canvas and the room on the results, measurements were made not of the reflected light, but “in the flow” – with the sensor located in the center of the image.

The visual setup of the projector is very good. Although the measurement results do not tell. Let’s say the maximum color gamut is similar to the Bt.709 standard and looks like this:

The color balance when choosing a “warm” color temperature setting is well balanced, although there is still a lot of blue at the beginning of the range. Minor adjustment is desirable. The average temperature at this setting is the desired 6500K.

Grayscale levels are perfect even when dynamic laser adjustment is on, as can be seen from the brightness response graph below.

The maximum brightness of white is achieved, of course, when choosing the normal operating mode of the lasers and normal temperature in the menu and is an impressive 1,139 cd / m2, that is, the luminous flux is really close to the declared 3000 lumens. However, the black level is also extremely high – 1.536 cd / m2.

For comparison: for JVC DLA-N5 it is 0.006 cd / m2. Selecting an economy mode for lasers in the menu and a warm temperature at which an almost perfect color balance is obtained does not greatly reduce the white brightness – only up to 808 cd / m2, which is a lot. But the black level at the same time drops to 0.9 cd / m2. This does not even make dark scenes look overly lightened, and the contrast rises to 898: 1.

JVC is on the right track, not only filling its line of projectors with models for every wallet, but also releasing devices for use in different systems and viewing conditions. Now they have both expensive, ultimatum in contrast, models, and devices that are more adapted to real, rather than specially prepared premises.