For some reason, it is believed that the English language is extremely poor in swearing – 70% of profanity is almost one word. Well, we hope the Nicolas Cage’s History of Swear Words series from Netflix will dispel this delusion.

Yes, it is devoted to only six English profanities, but word forms, phrases and fixed expressions with them exist no less than in other languages. And yet, many of these words long ago ceased to be taboo, entered everyday vocabulary and even changed their meaning.

By and large, Netflix’s History of Swear Words is an extended version of any video from the “Crash Course …” series on YouTube. But thanks to the charismatic presenter, excellent editing, cute infographics, selection of experts and interviewees, he looks much better.

The first season of History of Swear Words (it is not a fact that there will be a second season at all) included six episodes dedicated to six English swear words – Fuck, Shit, Bitch, Dick, Pussy and Damn. Nicolas Cage, experts and interviewees, and these are famous American stand-up comedians and actors, discuss the origin of each of the words, the change in its meaning over time, the impact on music, cinema, public consciousness, politics (yes, even so!), Etc. … 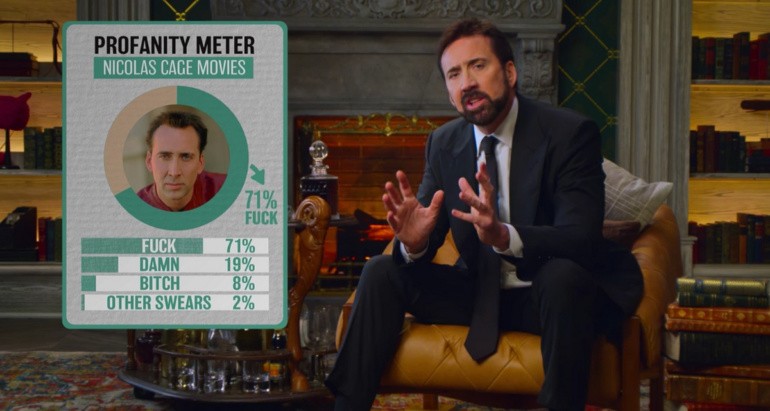 And then, surprise-surprise, it turns out that the swear words we are familiar with were not curses at all 500 or even 150 years ago. That the meaning of words changes depending on the moods prevailing in society. Language changes are ongoing, and their pace has accelerated significantly over the past hundred years, and soon many of the words that drove into the paint of your mothers will sound completely natural from the lips of children. As it became, for example, with the curse damn, which 200 years ago was almost the most taboo word in the English language, and today it is quite an ordinary exclamation of surprise or admiration, can even be used by kindergarteners.

Similar transformations occur with other words. For example, Shit became taboo in the Middle Ages with the development of the household and the emergence of individual closed toilets. And Pussy, only 150 years ago becoming indecent, today, after the famous statement of President Trump, is used by feminists as a symbol of the struggle for their rights. Think of Pussy Riot or the Pussy Hat movement . There are similar interesting stories in the History of Swear Words about each of the swear words. So if you want to know why only a woman can call another woman Bitch; what is wrong with President Richard Nixon; which actor swears in American films more often than others; why the filming of the last scene of Gone With the Wind required special permission and a fine; what swear word has become a universal substitute for every other word in English; how the King James Bible was edited; which rapper has done more for freedom of speech than others; and other interesting facts – watch this series.