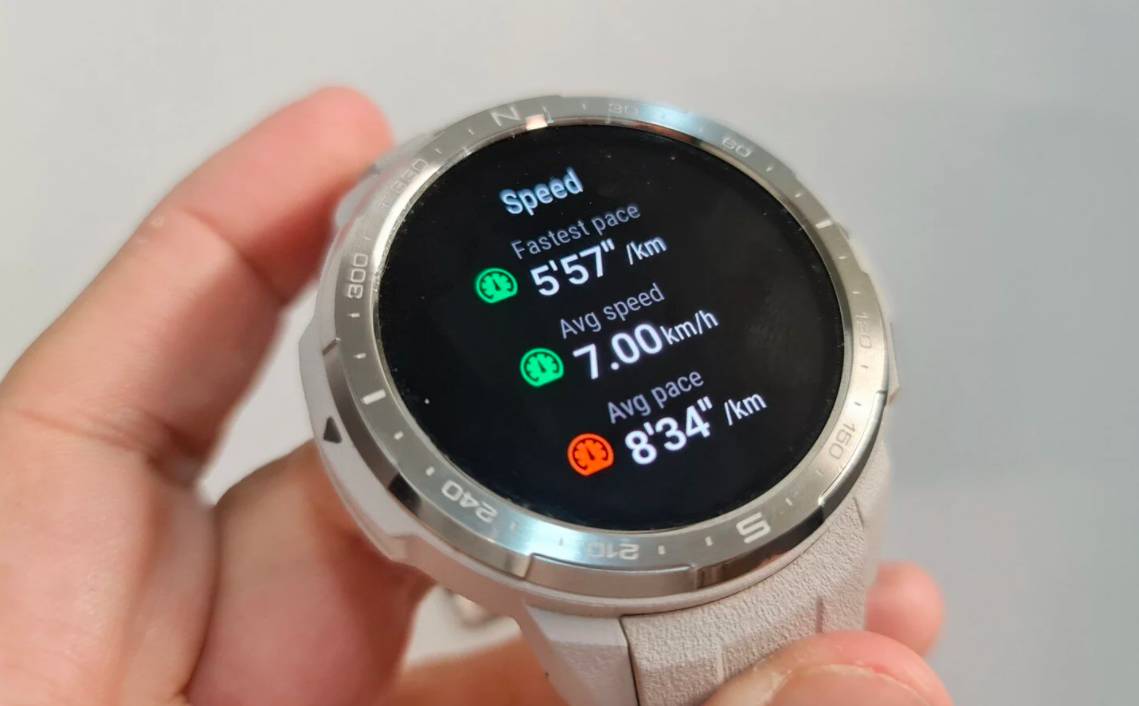 The Honor Watch GS Pro is a combination of the Huawei Watch GT 2 and Honor MagicWatch 2. Given the relationship between the two companies  of course the above is not particularly surprising. The “marriage” of functions and features from two devices in order to create a better one, is a common practice in the field of technology, especially gadgets.

But to what extent does the Honor Watch GS Pro manage to meet the requirements of the extrovert and fitness enthusiast to whom it is addressed and what more does it have to offer from the solutions that already exist in the market?

The Honor Watch GS Pro is a “rugged” smartwatch. It has the military standard certification IL-STD-810G, is protected from the elements, operates in extreme conditions and withstands pressure at depths up to 50 meters. Aiming at the energetic friends of gymnastics, sports and the “outside”, it is a massive -although not heavy- smartwatch that does not go unnoticed – if combined with a business / business casual look, then the contrast “stands out”. 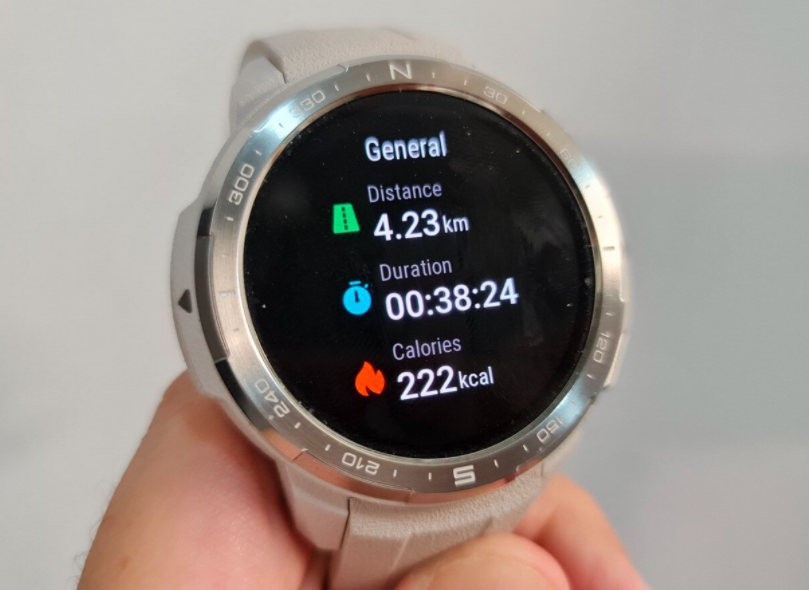 With a diameter of 48 mm, the front is dominated by a screen of 1.39 inches. Its rim is reminiscent of a diving watch, although it does not rotate here. On the right we have two keys: the top works as home while the bottom is programmable freely. At the back we find four sensors, two pogo pins for charging and the speaker. It is worth mentioning that despite the position of the latter, the sound sounded quite clear and in no case muted, while we were wearing it.

The quality of construction, however, is absolutely satisfactory. Its body is made of reinforced polycarbonate material with the rim and keys being stainless steel. The strap that consists of two parts offers a good fit without disturbing the wrist and is made of rubber except for the blue version which is made of knitted nylon thread. Speaking of colors, let’s say that the watch comes in three: black, white and blue.

As mentioned above, the front of the Honor Watch GS Pro is dominated by the 1.39 inch touch screen. It is an AMOLED type, with a resolution of 454×454 pixels at 326 ppi, has a highly satisfactory brightness and such contrast levels, which make its use outdoors extremely comfortable, even during a sunny day. In fact, its performance – as well as its dimensions and features – were similar to that of the Huawei Watch GT 2e. 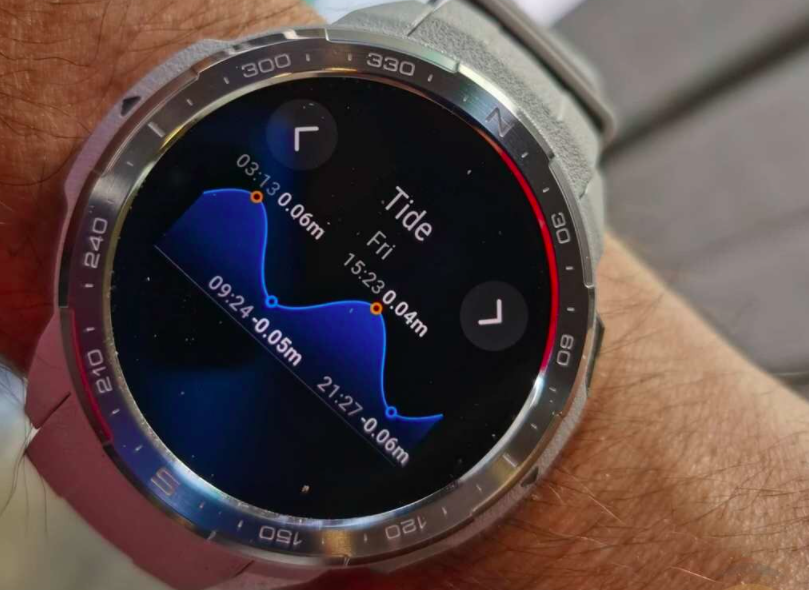 In terms of response, of course, we can not say that we were excited – although both the processor and the operating system of the watch played a role in this. In any case, the result was that in many cases we had to double-tap the screen to select something, while in some others that involved a series of steps, the clock was typically slow to move forward, making our lives unnecessarily difficult.

The Honor Watch GS Pro comes with the Kirin A1, 32 MB RAM and 4 GB ROM of which 2 GB are available to the user. It is equipped with a series of sensors (gyroscope, accelerometer, magnetometer, barometer, ambient light, optical heart rate sensor), GPS, Bluetooth 5.1, microphone and speaker. NFC is not supported and is compatible with Android and iOS (versions 5.0 and 9.0 or later), although you will need a Honor or Huawei smartphone to enjoy its full range of features. In this case you will be able to use it to take photos from your smartphone.

Its operating system is Huawei LiteOS, something that as we mention in every presentation of the company’s smartwatch, is a disadvantage. On the one hand, it limits the possibilities of the watch, as it offers zero interaction with its notifications and does not accept applications such as e.g. a smartwatch that runs watchOS or Wear OS, while on the other hand, its delayed response when navigating menus, running its built-in apps and switching between them, makes its user experience significantly more difficult.

Where the Honor Watch GS Pro does well, however, is in outdoor activities, as it is able to monitor and record data for 100 different types. From the usual such as running, rowing, walking and cycling, to the most extreme types of skiing, boxing, yoga and paragliding. In fact, for each of them, the clock measures different elements, depending on the type of activity.
You will be able to send your data to Google Fit and Apple Health through Huawei Health, however it is not possible to communicate with other apps (Strava, Runtastic, Runkeeper etc.). One feature we found quite interesting was the Route Back, thanks to which our watch showed the shortest way back to where we started our exercise, without the need for a smartphone. In fact, in combination with the memory and the songs that you can store in it, you can easily go for your walk without even taking your smartphone with you.

The built-in speaker performs unexpectedly well. Of course, do not imagine anything shocking, just given that we are talking about a speaker on a clock, we were pleasantly surprised. In practice, however, it was completely useless to us since it was not able -obviously- to replace the wireless headphones.
According to Honor, the watch battery has a capacity of 790 mAh, offering a range of 25 days. As impressive as this sounds, it does not correspond to reality, since to achieve this performance, you have to use the clock just to control the time – an unrealistic scenario. By activating one by one the functions of the Honor Watch GS Pro (GPS, TruSleep, pulse measurement, music playback, notification control, SpO2 measurements, etc.) the autonomy is expectedly reduced, reaching in our case about two weeks – a very satisfactory performance. Charging the Honor smartwatch is completed in about two hours.

A suggestion for those who exercise a lot and often, the Honor Watch GS Pro ultimately has too many similarities with Huawei Watch GT 2 and GT 2e. The measurements were quite accurate (although we noticed small deviations in the steps), the data he was able to record matched the activity while autonomy may not have approached the levels announced by Honor, but it was extremely satisfactory, of the best in the category. The icing on the cake is its virtually autonomous operation with the built-in memory and the smart use of GPS.

The problem lies in the price / performance ratio which is below average. Priced at around € 250, the Honor Watch GS Pro is significantly more expensive than both the Huawei Watch GT 2 / 2e and the Honor MagicWatch 2, and considering its features and capabilities, we find it difficult to understand why. The fitness enthusiast has other options and given the similarities between the Huawei and Honor proposals, it is perfectly expected to come up with the ones that will offer the most at the lowest possible cost.

Advertisement
X
Subscribe to get the best Tech news and reviews of the week.
By signing up, you agree to our Privacy Notice and European users agree to the data transfer policy.
Close
11/06/2020