The multiple input interfaces of the Canton Smart Vento 3 Active allow almost any device to be connected directly to the system: analog balanced XLR and RCA line inputs for connecting classic sources, while using the USB input with an XMOS driver guarantees High Resolution quality playback. You can connect your TV, Blu-ray player or any other player directly using optical or coaxial input. 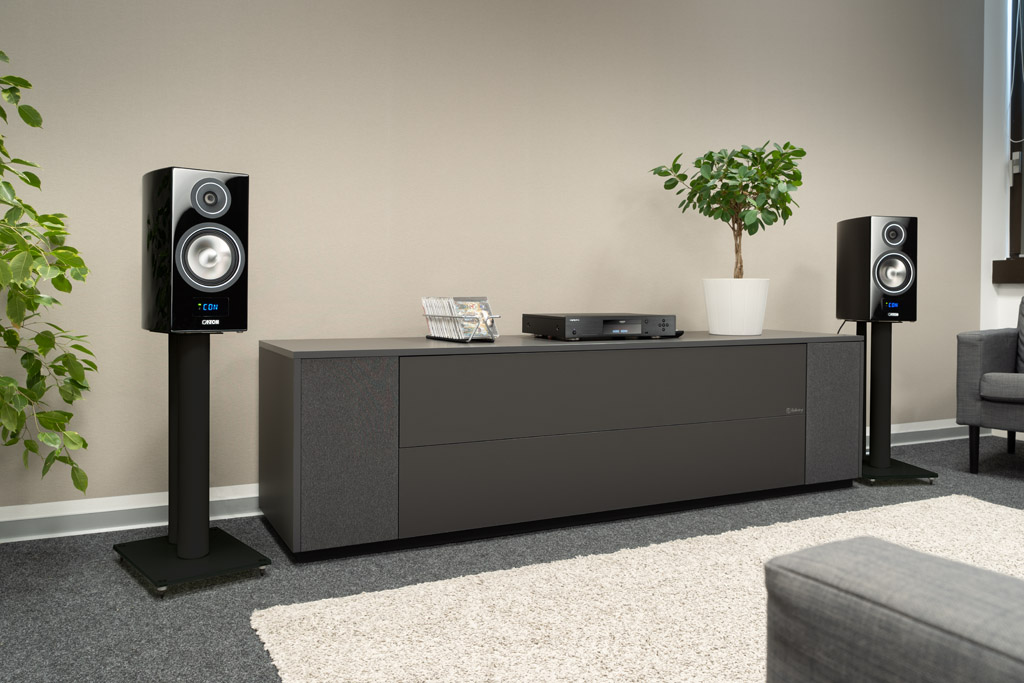 These models, like their floor-standing sisters Smart Vento 9, do not fall under the usual classification due to a special set of functions, which, as Canton promises, will soon form the basis for a whole family of universal networked smart speakers. So let’s figure it out step by step. The donor for the Smart Vento 3 is obviously the Vento 836.2 passive two-way bookshelf strips with upgraded 18 cm titanium woofers and a ceramic tweeter. The difference can be traced only in the weight and height of the case – both indicators of smart systems turned out to be slightly larger due to alphanumeric displays in the lower part of the facade and the presence of power amplifiers, power supplies and digital interfaces inside. In all other respects – the shape of the enclosures, their external lacquer finish, bass-reflex acoustic design with a port at the back, magnetic grills are the same.

The electronic part deserves a separate description. According to the data received from the developers, inside each Smart Vento 3 there are two pulse terminals based on TAS5342 chips from Texas Instruments (connected in a bridge circuit), as well as one DSP D2Audio DAE6. The latter is a ready-made audio engine on one microcircuit, which includes a PWM controller, a digital audio processing section (equalizer, volume control, band division), Dolby and DTS decoders, converters, memory buffers, digital filters working with oversampling up to 192 kHz , as well as all the necessary interfaces for receiving digital data (S / PDIF, I2S, etc.). For this reason, there is no separate digital-to-analog converter on board Smart Vento 3 – it is simply not needed. When ordering a stereo pair, the client receives two slightly different speakers, Master and Slave, The acoustics can be used as usual active monitors by feeding an analog signal from a pre or a source (and the latter can be without an adjustable output) to the RCA or XLR terminals that each speaker has. The second option is to do the same with coaxial or optical cable, taking the signal directly from the player or even from the TV panel. The third way is to link the computer source via USB. There is also a fourth – Bluetooth – for mobile gadgets. In total, we already get at least six independent lines, which are served by the switch built into Smart Vento 3 from the remote control.

With the exception of connections via an analog or balanced line, when the signal must be fed individually to each speaker, in all other cases, the connection is made only to the “master” speaker, and transmission to the “slaves” is carried out either by a second coaxial cable (included in the kit), or generally over a wireless interface. By the way, it was no coincidence that I mentioned slave speakers in the plural. Since the Canton Smart family is based on an 8-channel digital platform, one Master can send a signal to seven more Smart Vento 3 or Smart Vento 9, compiled into a 5.0 or 7.0 multichannel system. In the future, the choice of plug-in Canton speakers will be expanded with an active subwoofer, soundbar and, possibly, a module with streaming functions for full network playback. In this regard, the architecture of Smart Vento is fundamentally different from that used by Canton in the active acoustics of the GLE 496.2 BT Set – there are no HDMI inputs for simple connection to a TV via a return audio channel, but in the choice of “partners” for the master speaker you are definitely not limited by anything , which opens up great opportunities for further system upgrade. This approach also saves money on an AV receiver and eliminates the hassle of running multiple speaker cables — just a media player and video pane is all it takes to get a complete theater setup. You do not have to be content with only the virtual “environment” (although this mode is also provided). And most importantly, the assembled installation can be used as a stereo music system,

Before listening, a little more about the menu, service features and modes. It is not easy to understand the first one without instructions on the fly, but it is comforting that this procedure is done only once when configuring the system: we set the methods of signal transmission between Master and Slave, turn on automatic input selectors where necessary, teach the system to understand basic commands (on / off, adjustment volume) from other consoles, so as not to resort to the standard one – that’s, perhaps, all that needs to be done at the initial stage. Sound settings are kept to a minimum. The bass, mid and treble tone control is so delicate that it can be likened to the settings found on studio acoustics for room correction. There are also three clear modes: Stereo, Music and Movie. The first one does not need any comments, I think, but the other two imply special processing. The “musical” preset works like this: it scales and brings the scene closer (the effect is quite pronounced), and at the same time it slightly changes the tonal balance, although the system does not interfere deeply into the harmonic fabric and retains an almost original flavor, which is important for music.

Cinema mode, on the other hand, dramatically shifts the musical balance, emphasizing the bass area, accentuating dialogues and enhancing ambient effects. but it is the space that almost does not touch – it only adds the reverberation of a real large cinema. At least, this is exactly what happens in a system composed of two speakers, and this is apparently a consequence of the activation of the built-in DTS TruSurround virtual environment function. Note that neither Music nor Movie is turned on when using the analog inputs. Here you will always get the sound “as is”.

And it was this inclusion that impressed me the most. Frankly, at first I looked at Smart Vento 3 as speakers packed to overflowing with features, and not as a model with advanced heads and a cool amplifier path, but they changed ideas from the very first chords. They have a huge range not only in frequency scale, but also in dynamics. The perceived maximum sound pressure can easily reach 110 dB peak, while the acoustics does not begin to distort or crush the signal. The influence of the professional monitor school Canton is clearly visible here – the sound is linear, accurate, clean and free.

The bass is transmitted powerfully, impulsively, but without humming at all. Its smooth, yet clear percussive character speaks at least of the excellent coordination of the amplifier with the bass driver. There are no complaints about the upper band either – it is served completely without the “digital” callousness of pulse amplifiers, and even with a good study of details.

It seems that here, too, Canton engineers did everything to match the output of the impulse as best as possible specifically for their ceramic tweeters. And in the liveliness of the mid-range presentation, the new model is unlikely to yield to its passive brothers. In general, if you were looking for active monitors that are close in characteristics to the studio class, with a not frightening price and a decent finish, then you are definitely here. The main thing is to set the DST analog inputs operation mode in the menu (to exclude the radio channel) and you can easily get playback with a perfectly rendered spatial picture, with three-dimensional and clear images in it, with a distinct “air” and a tangible “foundation” without any noticeable deviations in frequency response and even without signs of any tint. Personally, I had no complaints about acoustics in the “studio” connection at all. Well, except that the brightness of the “chasing” tom-toms, snare drum and higher percussion did not reach the level that you hear from live instruments, and in the band below the speed was almost lacking … 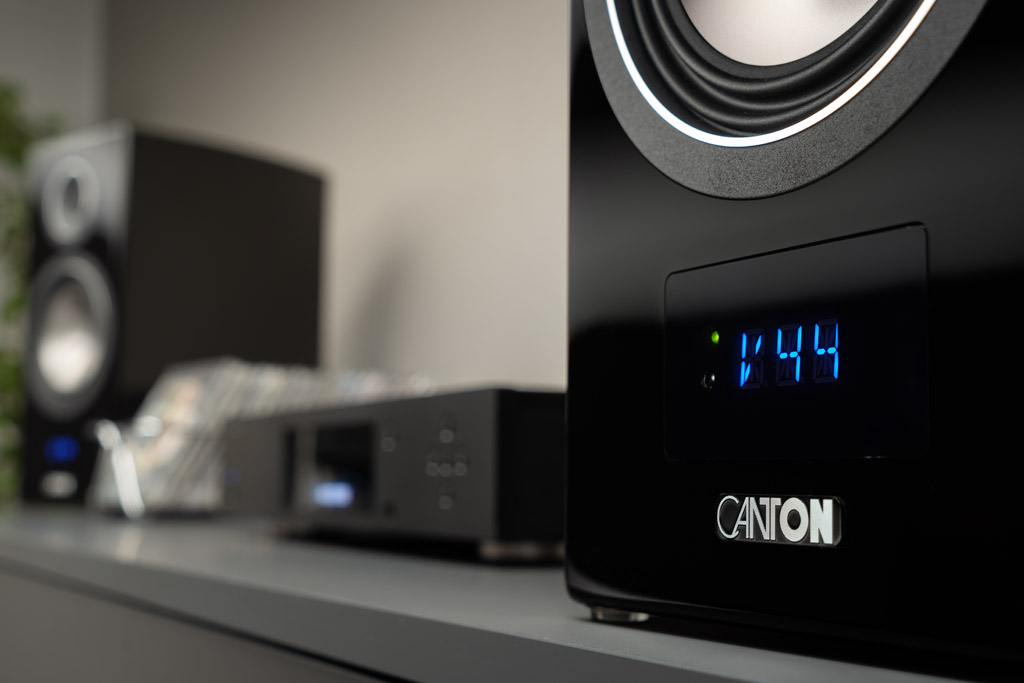 Other features were revealed when studying the “smart” -function. The USB receiver in Smart Vento is made, it seems, without audiophile problems – it does not receive a signal above 96 kHz in asynchronous mode, although it still offers to work with a PC or Mac at 192 kHz. However, as it turned out later, even from such a limited connection, the sound quality was no worse than from standard S / PDIF for optics or coaxial.

One of my mobile devices did not want to switch to the advanced aptX codec in the Bluetooth channel, and the transmission to Smart Vento 3 was carried out only through a standard SBC, which was also felt by the simplified sound. It seems that everything is reproduced neatly, evenly and sometimes even very euphonious, but it strongly gives off synthetics and scarcity of harmonics. But the second smartphone seems to have succeeded – the timbre pattern during playback came out noticeably richer and more natural.

Radio communication between Master and Slave speakers is, of course, very convenient, but not ideal in terms of sound. Especially if you set a goal for yourself to get that proprietary stereo image rendering accuracy, which you can count on from Vento level speakers. The depth of space is preserved, but the images in the foreground grow larger and lose their distinct outlines, and on the distant planes they generally dissolve in a reverberation “haze”.

Fortunately, this problem can be solved. We connect the master and slave speakers with a coaxial cable, as soon as normal localization appears. And if, instead of a standard wire, you use a high-quality 75-ohm cable, the spatial clarification will become even better – now all the images and echoes will return to their places in the scene. All this allows us to conclude that the audio path in Smart Vento 3 is still pretty good. I didn’t notice any digital artifacts in the sound. The whole chain of receivers, DSPs and amplifiers in this acoustics has a really high resolution and allows, for example, to understand the difference in class between a serious CD-player connected by digital with a good cable and a standard digital output on a TV panel. Or, notice the difference between a compressed audio file and its standard uncompressed CD quality version.

Of course, it would be really cool if Canton digital stuffing for the new model to the highest Hi-Res Audio standards, to the requirements of the most discerning audiophiles. But here German engineers decided to be pragmatists and preferred simpler and cheaper electronics for Smart functions. Which is logical – this is needed first of all by a mass client who has always been frightened by the high cost and complexity of advanced home theaters. And here you get a comparable class of multichannel playback with a minimum amount of equipment and hassle with it. Moreover, even in the minimal two-channel configuration we tested, the Canton speakers were able to show excellent “Hollywood” inclinations. With built-in Dolby / DTS decoders, smart surround virtualization and powerful bass support, original movie accompaniment with a 5. 1 or 7.1 sounded no less grandiose than in any large auditorium of a commercial premiere cinema. So you will also save a lot on going to the cinema.