Thin long strips of white LEDs located under the dustproof grills and indicating the selected volume level are perhaps all visible features from the outside, hinting at the originality of the new active Callisto systems. But, unlike most stereophonic Bluetooth speakers on the market, this indication is available on each speaker and this is due to the fact that the Danish development was created according to completely different and even unique principles. In a stereopair, for example, there is no master or slave speaker – the left one is absolutely identical to the right one. Moreover, Callisto are, strictly speaking, not quite “blue-toothed” – their own protocol is used for wireless signal transmission to speakers. But about him – a little later. In the new range, you can choose between the Dali Callisto 2 C shelves and the more expensive Dali Callisto 6 C shelf units. As you can see from the photo, they have a lot in common. The hulls are of the same width and depth, they are made of 25 mm MDF plates, supplemented with internal bulkheads and the same type of rounded faceplates. The acoustic design of the compact model is a bass reflex tuned to 46 Hz. The floor-standing versions have a double bass reflex with a resonant frequency reduced to 40 Hz. All ports are located at the back.

For the upper range in the Dali Callisto 2 C, a hybrid assembly is responsible – a tweeter with a 30 mm soft dome and a 17 x 45 mm film isostatic emitter, which is located higher in a circular opening under a fine-mesh dust net. For the middle and bass – proprietary drivers with 17 cm cones made of lightweight long-fiber cellulose (one in each shelf monitor, and a pair in the 6 C models). These speakers are also notable for the magnets sintered from a special Soft Magnetic Compound. SMC technology, which allows magnets to obtain increased electrical resistance without weakening the magnetic permeability, has long been used in the most advanced DALI models – it minimizes distortion by reducing the eddy currents flowing in the magnetic drive. And about the most interesting. On board each speaker there is its own DAC, but not anyhow, but Burr Brown PCM1796. It works with only one of the two stereo channels (which one is set by the user), but converts the signal in differential form, sending it further to pulse amplifiers with a total power of 250 watts. The latter are made according to advanced circuitry for class D – with a feedback loop and self-stabilization. The D / A conversion stage is preceded by a DSP for active band splitting, preceded by a dual-band radio module operating on a proprietary 30-bit protocol. It was created specifically for broadcasting digital audio. It does not use compression, it provides a high degree of packet security and a very low transmission delay (25 ms). Basically, we are talking about a wireless implementation of I²S, but limited to 24 bit / 96 kHz bandwidth. Bits not used for audio transmission are used for service data exchange and control.

Since the radio interface in the speakers does not support any communication with either Bluetooth or Wi-Fi, another component is used to connect sources – Callisto Sound HUB. It looks like a pre-amplifier with a remote control and volume control. But this unit with two line inputs (RCA and “jack”) and three digital (coaxial and two optical), is suspiciously light even by standards. It does not have its own transformer (power is supplied from the adapter), and the filling includes the most modern Bluetooth module with aptX HD, a switch with ADC / DAC for analog I / O and the aforementioned patented radio interface with a control microcontroller. Those. in front of us is actually not a pre, but a point for connection and multiple distribution of a signal with a duplex control channel. And the point, allowing a functional upgrade. You can put a Chromecast media streamer whistle in the USB socket, and an NPM-1 BlueOS module in one of the two service bays on the rear panel. At the same time, the hub turns into a powerful device compatible with one of the most advanced multi-room platforms. You get the proprietary Bluesound control interface, connection to almost all known streaming networks and the ability to play almost any HiRes file from local storage. I will add that the Dali Callisto 2 C acoustics also have analog inputs, so that it can be used without a hub as ordinary active systems. But it is unlikely that anyone will consider them in this way. First, we inevitably make compromises in sound quality due to double conversion. Secondly, we lose all the luxurious functionality listed above. That’s why I didn’t even bother trying to test the analog signal directly to the speakers.

Wireless connection is not difficult. On the back panel of the hub, press the Link & Connect button. Then we press the same one on any speaker and set the position on it – right or left. We do the same to install the second column, and if necessary – the third and fourth (multiple access to topics is good, which allows you to enable up to four pairs at the same time). After that, the given configuration is confirmed by pressing “Link & Connect” on the Sound HUB again. Everything! It remains the usual way to “pair” smartphones with it via Bluetooth and connect traditional sources with cables – CD-player, TV-panel … 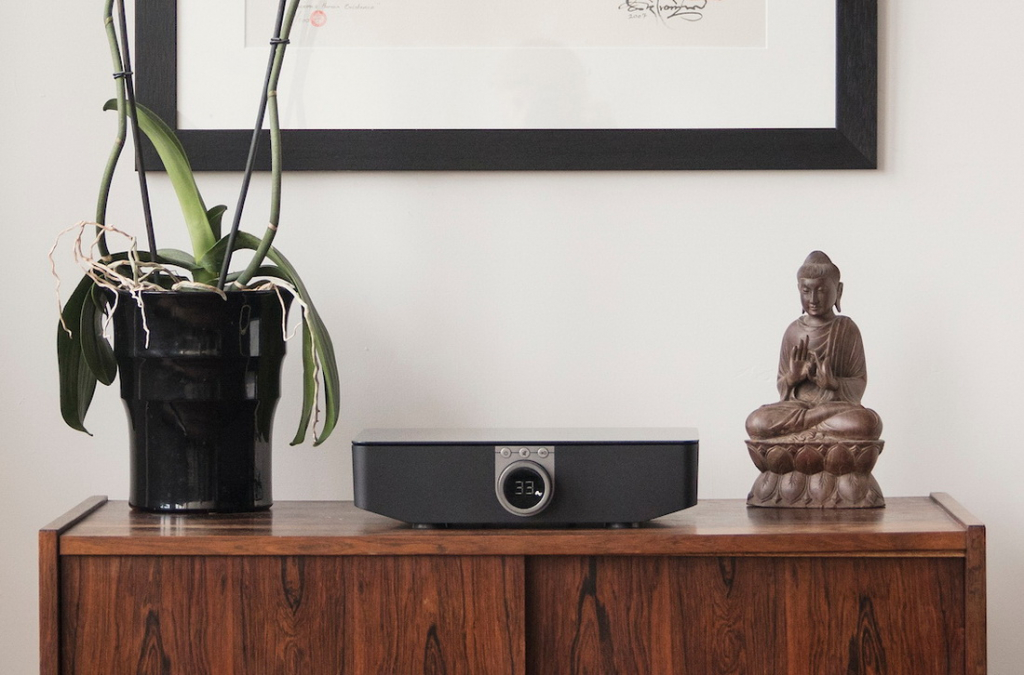 As a significant user advantage, I will note the centralization of management. The physical volume knob on the control switch, for example, itself does not perform any manipulations with the signal – the process of changing the level occurs directly in the speakers. But you do not have to deal with leveling the levels from different sources: the Callisto wireless interface synchronizes the transmission of commands between all parts of the system, setting the required volume, incl. and on the analog outputs of the hub for a subwoofer and an external power amplifier.

Thus, whether from the remote control, from the main device, from the touch control panels that are installed on each speaker (this “feature” is not only effective, but also convenient) we control the Master Volume.