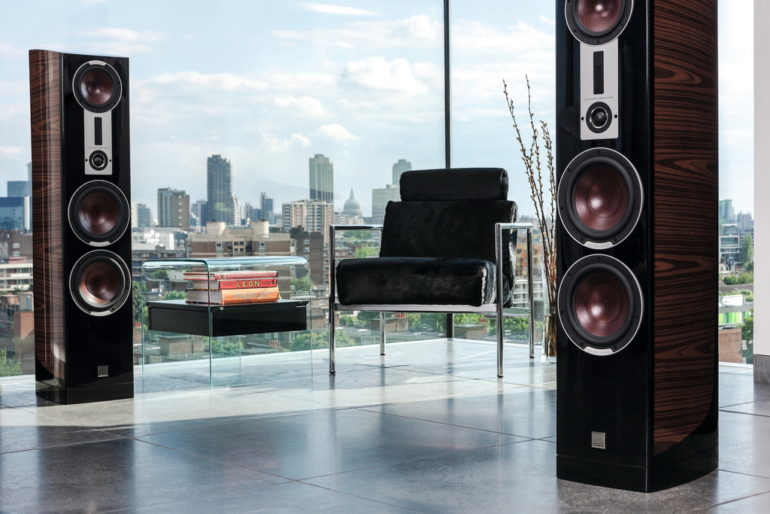 The Dali Epicon series builds on the knowledge gained from nearly 30 years of research, development and manufacture of loudspeaker systems, as well as the results of experiments with new and known technologies. The Epicon series showcases how far Dali has gone in its quest for authentic sound reproduction. Designed for the discerning audio and home cinema enthusiast, these speakers are designed with a sense of exclusivity and simplicity. With their distinctive Dali sound, they take it one step further and intend to do more than just meet the demands put forward. We have managed to surpass them. 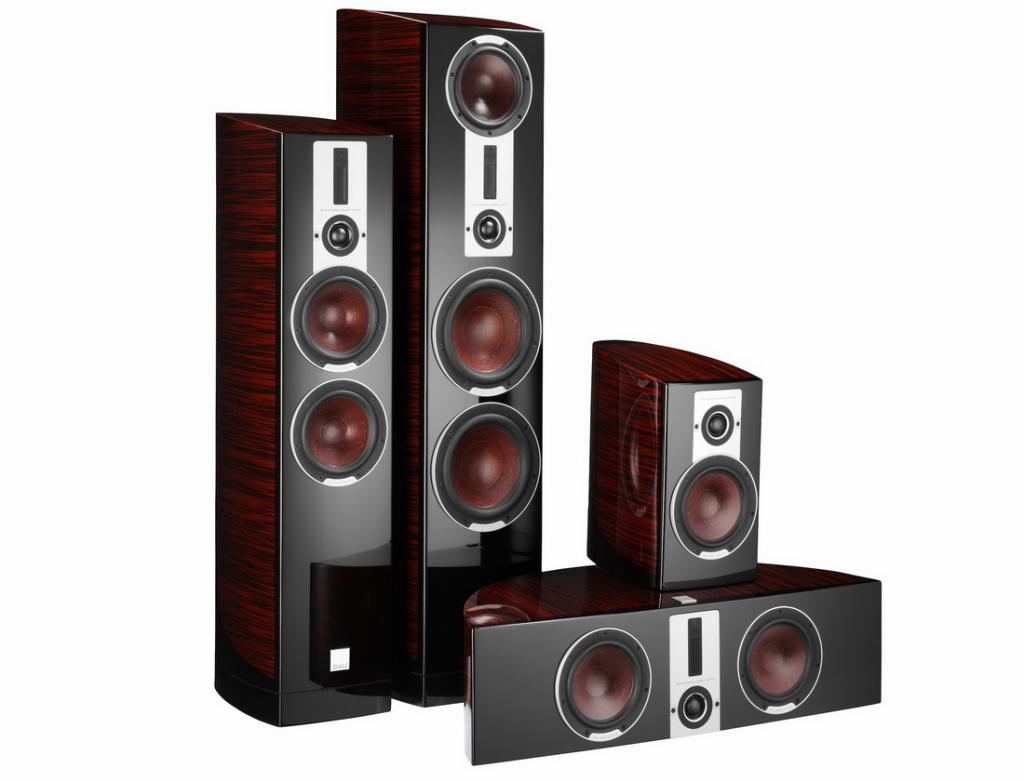 The speakers for the Dali Epicon are not only designed, but also manufactured at the Dali factory in Denmark! The cabinet is made of 6 layers of MDF glued together to create a rigid construction that suppresses resonance. Smoothly curved shapes virtually eliminate standing waves. An innovative linear magnet system based on SMC eliminates four major causes of speaker distortion – eddy currents, hysteresis, flux variation and voice coil inductance variation. An advanced Soft Magnetic Compound (SMC) eliminates magnetic flux variations in the gap. This solution minimizes distortion compared to conventional speakers. A new generation of wood fiber diffusers with a new impregnation process and outer coating.

The Dali Epicon 8 is a sleek and flowing 126 cm high speaker, the flagship of the Epicon series, and is additionally equipped with a specially designed wood-fiber-reinforced paper midrange driver. The new speaker is located in a separate cabinet above the hybrid tweeter module, which is complemented by two bass drivers below. The highlight of this series is the DALI Linear Drive magnetic system. Having decided to get rid of the nonlinearities inherent in magnetic circuits made of electrical steel, DALI engineers decided to use a new non-conductive powder material in the magnetic system – SMC (soft magnetic compound). Originally developed by the Danish company Grundfos for electric motors, the SMC consists of iron granules in an insulating shell that is retained during sintering. As a result, eddy currents are reduced, as well as losses due to hysteresis are significantly reduced and, accordingly, the level of distortion in a wide dynamic range is reduced. The case of the Dali Epicon 8, like that of the younger model Dali Epicon 6, is made of six layers of MDF and is finished in polished black lacquer or natural veneer of different types of wood. Curved lines of the body, without the presence of parallel surfaces, almost completely eliminates the occurrence of standing waves. Overall, the cabinet is designed to provide extreme rigidity and to negate the resonances that arise in the loudspeaker when sound is reproduced. The massive front wall, on which the emitters are located, serves the same purpose. And the manual assembly and testing of each speaker system at the DALI factory in Denmark creates that final Hi-End product, where outstanding technologies are intertwined with original design, which will be appreciated not only by audiophiles, but also by connoisseurs of beauty. The crossover is housed in a separate section and located at the bottom of the cabinet. There are four high-quality terminals for connecting the speaker cable, which are located on the back of the speaker near its base. Open and full of natural sounding with a superb three-dimensional scene and attention to detail once again reminds us that acoustics are at the very top of the line. The DALI Epicon 8 loudspeakers have a flat impedance and therefore are not too complex a load for the amplifier.

These imposing floor standing loudspeakers topped the Danish company’s lineup in 2012. Since then, there have been many notable developments, innovative products have been created – both in DALI and in the industry as a whole – but the Epicon 8 remains the flagship. This is not surprising, because the technologies developed for them are still relevant, but most importantly, their use has provided a unique, unique sound character of the speakers. So the offer to test these columns and share my impressions with the readers was accepted with pleasure – it’s like going to a museum and looking at a recognized masterpiece. With only one difference: you can still buy them new.

You can only look at a picture or other museum exhibit, but speakers are needed to listen to music – but it will not be superfluous to just look at them. Epicon 8 is a harmonious blend of monumentality and grace. They are quite high, and if you look at them from the side, you understand how voluminous these cases are, because their depth is almost half a meter. However, the smooth lines of the side panels converging towards the rear hide it, so that these DALIs do not leave a feeling of massiveness. And the upper, also not flat, face is directed upward, which only adds to the illusion of lightness of the design. In fact, the couple will pull almost a centner – but only those who will deliver and install it in the room will know about it. DALI is largely owned by the acoustic engineers who work for it, so it is not surprising that new models are created on the basis of scientific and technological research, including those carried out by the company itself. At one time, the Epicon speakers were the first to receive speakers with magnetic systems that ensure maximum linearity of the voice coil movement by minimizing phenomena such as eddy currents, hysteresis, magnetic flux variations in the gap and changes in coil inductance.

This was facilitated by the use of an advanced soft magnetic compound (Soft Magnetic Compound, SMC), a patented DALI technology. The abbreviation can be seen on the midrange and woofers of the Epicon series. They also use wood-fiber-reinforced cellulose diffusers – a new generation of the company’s engineers’ favorite material. Diffusers allow to bring to the final stage – emission of sound waves – the potential for increasing the linearity of the oscillations of the coil in the gap of the magnetic system. Over the years since the release of the Epicon series, these innovations have reached, as expected, the lines following the flagship. No less remarkable is the traditional DALI hybrid tweeter, consisting of a large dome head and a ribbon radiator. The first was specially designed for the Epicon range with an emphasis on linearity of voice coil movement and solid headroom at high volume levels. Its operating range is from 3.1 kHz up to 20 kHz. The second one comes into play at a frequency of 10 kHz with a smooth increase in the frequency response to the 15 kHz mark – and then a uniform section follows up to 30 kHz. Thus, at a certain frequency segment the speakers work together, which makes it possible to speak of the Epicon 8’s 3.5-way acoustic scheme, but the “half” refers not to the lower part of the spectrum, as is usually the case, but to the uppermost one. The beautiful-looking housings are sophisticated in design to provide optimum operating conditions for all emitters. Its walls are made of six layers of MDF glued together and attached to a 63mm base, while the front panels that mount the speakers are a solid 33mm thick. From the inside, the enclosures are separated by partitions so that each of the woofers is loaded by an identical volume of air with the bass-reflex acoustic design of both, and the ports are located strictly opposite the speakers on the back of the speakers.

The internal space for the midrange is also separated by a baffle. Both tweeters are mounted on the same thick aluminum panel and naturally have their own chambers to protect against interference from other tweeters. The DALI Epicon 8 is a great speaker with an outstanding sound character. In a large enough room that can accommodate not only their overall bodies, but also a powerful bass, you can enjoy playing music of a wide variety of genres. Strict classics will delight you with the reliability of performance, vocals – with naturalness and expressiveness, jazz – with rhythm and ardor, and hard rock – with real, weighty “weight”.