The Dali Oberon 1 C and Sound Hub Compact is a unique wireless speaker system that will give you unforgettable emotions that you could only experience from a traditional Hi-Fi system before, only now it is possible without a large amplifier and thick speaker cables. The amplifier in this model is already built into the wireless speakers.

The delivery set includes a Sound Hub Compact hub distributor using its own 30-bit data transfer protocol, on the rear panel of which there is the necessary commutation for connecting external audio signal sources. The device has two optical, analog inputs on RCA and mini-jack connectors. There is a jack for connecting a subwoofer. The Sound Hub Compact is also equipped with a USB jack for powering or charging compatible devices. With the Dali Sound Hub Compact, you get a digital HDMI connection to your TV, including Audio Return Channel (ARC). You can adjust the volume with your existing TV remote and it all turns on and off automatically, so you only have to focus on enjoying good sound. The wireless technology used works with a maximum latency of 15 ms, and the synchronization between the speakers practically corresponds to professional standards, Sound Hub Compact is compatible with all Dali models with the index C. You can connect both digital and analog music sources, as well as sound from a TV, via With Bluetooth 5.0, you can play high quality music wirelessly directly from your smartphone. The Dali Oberon 1 C speakers have a two-way configuration and are equipped with high-quality proprietary speakers. It is a 5.25 ” wood and paper cone woofer equipped with a powerful magnet system and mounted on an anti-resonant chassis. To eliminate the effect of eddy currents on the coil and the associated sound distortion, the woofer uses proprietary SMC technology. The Dali Oberon 1 C tweeter has been specially designed for use in this series of loudspeakers. It features a 29mm lightweight fabric dome that operates over an extended frequency range for detailed and airy sound. The tweeter is mounted on a circular metal chassis that protects it from vibrations and also effectively removes heat from the voice coil. The damped casing and the relatively small size of the front panel provide the Dali Oberon 1 C with a wide soundscape with precise placement of images. Despite its compact size, the Dali Oberon 1 C has a punchy and full-bodied sound.

Recently, DALI has regularly added active models to its range. We started with a separate Callisto line, then released the Rubicon C of a higher class, based on the passive series of the same name, and now we took up the most budgetary Oberon line – and made it active, perhaps, closing almost all price segments in which such acoustics can be relevant … However, due to its budget, Oberon C had to use simplified versions of the technologies known from Callisto and Rubicon C – so that the price did not become completely inadequate. But on the other hand, Oberon C has unique functionality that is not available in older models. The active and passive Oberon drivers share the same drivers: a large 29mm tweeter and a 133mm midrange / woofer with a proprietary pulp and wood fiber cone and SMC magnet system. In front, the active model cannot be distinguished from the passive one: the same loudspeaker flanges with notches, the same holes for the pins of the protective grilles, the same colors. Only in the active version, each speaker has 50 W of built-in class D amplification, due to which it is as much as 200 grams heavier. The right and left speakers are identical to each other, there is no master or slave: each of the speakers has its own amplification, its own power cable, and the speakers are not connected to each other in any way. All communication occurs wirelessly through the hub: it allows you to place the acoustics in the room quite freely – within a radius of 10 m. All sources are connected to the hub. One of the most important differences between active Oberon and other modern active DALI lines is in the hub. The Oberon C comes with a compact version of the hub, into which you cannot insert a BluOS-based streaming module. Optics are available from the connectors (as many as two, one specifically for the TV), RCA and HDMI with ARC support – this interface is not in the large hub. While Rubicon C and Callisto are designed primarily for music playback, for Oberon C the TV becomes as full-fledged source as any audio player.

The focus on video can be felt by looking at the back of the speakers: there is a home theater layout with channels marked with LEDs. In the future, based on Oberon C, it will be possible to assemble a full-fledged wireless home theater, the signal for which will be sent by the hub. The hub communicates with the speakers using its own 30-bit protocol, operating at one of two frequencies: the hub chooses either 5.2 GHz or 5.8 GHz, depending on the congestion of the range. The signal delay is minimal – 15 μs. I could not feel it, although I started a video from a laptop and sent a signal to the speakers via Bluetooth – that is, there were many obstacles on which the sound should have stumbled. The hub’s own converter converts all incoming signals to 24 bit / 96 kHz. “But it transmits 30 bits,” you say, and you will be right. Another six bits are allocated for error correction, transmission of information about the volume level, which speaker the signal is intended for, and so on. The data transfer scheme does not differ from that used in Callisto and Rubicon C: the small and large hubs are completely interchangeable and are ready to work with any modern active audio systems from DALI. But due to positioning, a small hub comes with Oberon C.

The hub is controlled from the remote control – no applications, everything is simple. Moreover, this hub has a remote control that is different from that supplied with the hub for Callisto and Rubicon C – it has a separate button for selecting the HDMI input. Dimensions and materials are the same. If you wish, by the way, you can use Oberon C with a large hub, which has full network functionality, but you need to buy it separately. 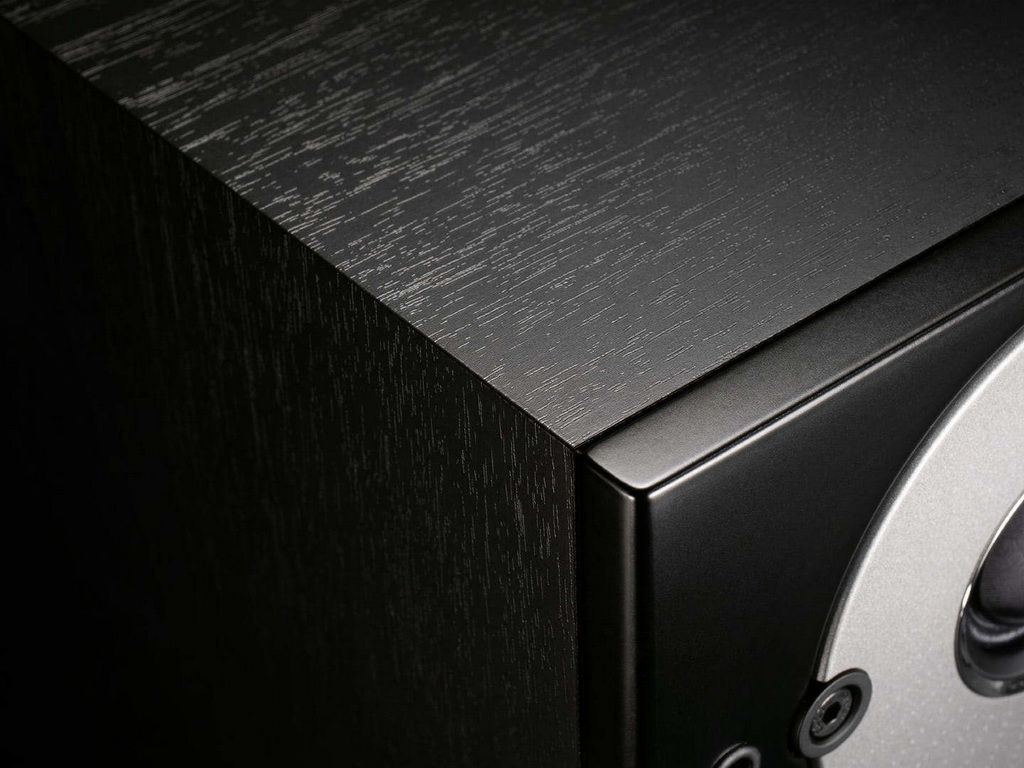 Passive Oberons were designed with wall-mounted use in mind – and in the active version, this functionality was not forgotten. The power cable is recessed into a small niche so as not to interfere with the installation; in the upper part of the case, above the small bass reflex, there is a hole for the mount itself. At the bottom there is a button for connecting acoustics and a USB connector for updating. DALI Oberon C does not have any special effects like LED strips, as on older active speakers.

In terms of height, the acoustics remained the same capricious. I was lucky – I ended up in a showroom with several different stands. And if with the stands 60 cm high Oberon 1 C whistled without any hint of bass, then with the stands 70–75 cm high everything fell into place. The feeling of a small, but nimble, groovy, daring hatchback has not gone anywhere. With stands of the correct height, the sound is collected, with a small but noticeable strong bass. I didn’t expect the small speakers to play drums with the right amount of aggression and inevitability on the tracks from Tool’s “10,000 Days” album – but they did. Of course, they lacked mass, but they conveyed the right emotions. But this is still DALI, which means that there is some lightness in the sound. She feels good on guitars in the same “Right In Two” and on vocals. Sometimes the ringing of cymbals and thin strings becomes more intrusive and attracts more attention than other elements of the melodies. And it really changes the perception of some compositions – for example, in the long track “And I Will Kiss” from Underworld, the emphasis shifts from epic percussion to details scattered against its background: various buzzing, screaming and clattering, howling vocals. The acoustics of female voices breaks away – they are very lively, deep, slightly set forward in comparison with everything else. There is little volume, the scene seems small, especially if you sit in the corners of an equilateral triangle. You can sit further away, the stage will become wider, but simpler and somewhat shaky. The sound, oddly enough, combines drive and chamberness at the same time. This is the kind of acoustics that creates a personal party. She likes to play nimble, funny, emotional tunes, not comfortable, cozy and relaxing ones. True, in my opinion, this does not really fit in with the capabilities of the built-in amplifier: it seems to lack control and clarity. On Combichrist and Nine Inch Nails, the sound periodically turned into non-textured, flat noise. In Pink Floyd’s “One Of These Days,” there was little contrast between the notes on the slide sounds. Emotions are in place, but the presentation seems a little blurry. On Bluetooth, the speakers seem to play more aggressively, albeit more tightly – it seems that they are trying to compensate for the lack of range with increased dynamics. The sound seems flatter, and it loses volume on the low end – but this is a feature of the aptX HD protocol. As far as I know, he is very forgiving with bass. In general, the sound via Bluetooth, of course, is clearly easier than via optics – but far from terrible. All of the above applies to the situation when the Oberon is played louder – and the speakers sound calm at low volume. The enthusiasm and drive recede into the background, bringing to the fore the proprietary DALI high frequencies and creating a fairly comfortable and accurate sound. 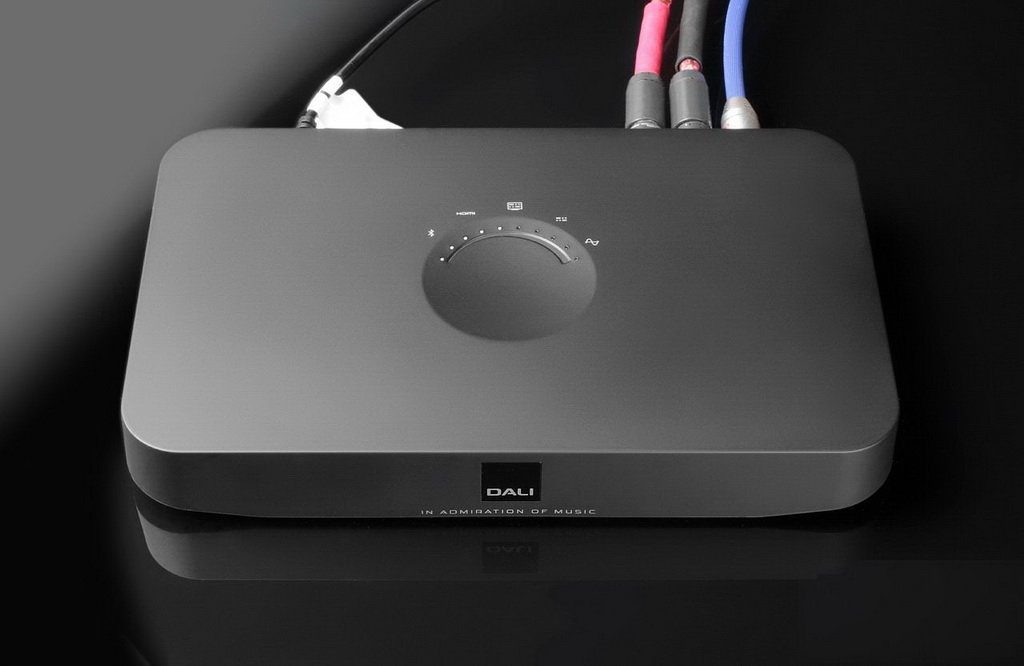 Two rules for using active DALI Oberon 1 C: put it higher and listen louder. In such a situation, they show themselves from their best side: it is a lively, emotional, driving sound – moreover, a corporate one, with a recognizable emphasis on the high-frequency range and with a very pleasant rise in voices. I still can’t get used to it, so every time various compositions open up for me from a new side – an emphasis shifting from rhythm to something that composers and sound engineers have hidden higher, changes the perception of melodies. For some tracks, this is very beneficial. The main feature of this acoustics is that it is active, and the amplifier itself could be a little faster and more accurate. On the music this speaker prefers, I would like more control. There is a neat elastic bass in place, Active DALI Oberon 1 Cs cost about 2.5 times more than passive ones. And this cost includes not only the hub and built-in amplification.

This cost includes the function of an ecosystem, a wireless home theater, a simple audio system solution for a TV. And because of its three-piece design, this audio system offers more installation flexibility than a long beam soundbar.

And you can also use them as a desktop or even a free-standing system, capable of quietly and comfortably humming in the background and hitting it properly when turning the volume down. But finding three free sockets in the house, and even nearby, is not an easy task.