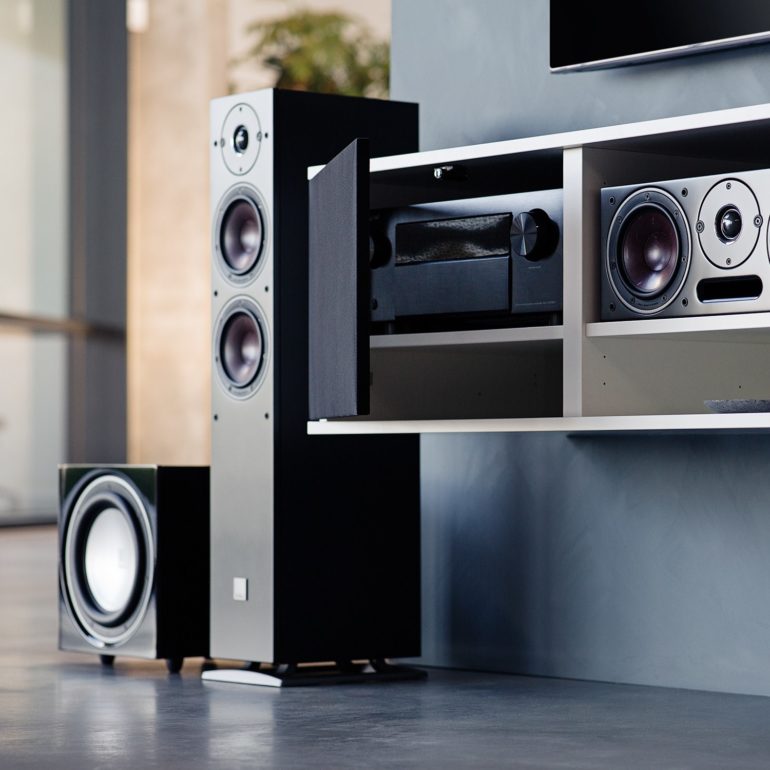 .The speaker is floor-standing, has a height of only 83 cm and is small enough to fit comfortably in “cramped” and small living rooms. It has a MDF cabin, is made in China and is available in four different finishes, Light Oak, Dark Walnut, White and Black Ash. It is a very elegant speaker, well designed and very beautiful, with an appearance higher than its price but without unnecessary ornaments.

The beautiful appearance of the Oberon 5 is augmented by the fabric screens, of different colors per finish, that fuse in the holes of the buffalo, which is made of hardwood (possibly HDF) and is not the same as the rest of the cabin. 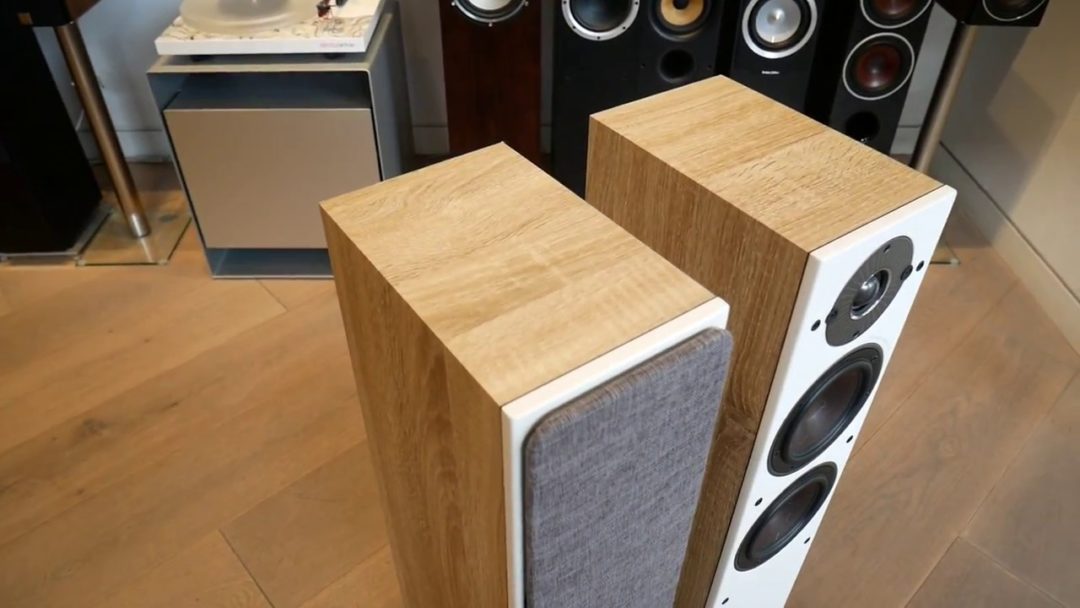 Internally there are fasteners that join the sides of the cabin for greater rigidity. For support, the Dali has an aluminum base, which “lifts” the speaker to about three points, is fastened with screws and takes pins or elastic self-adhesive mats that are in the package.

The layout is two-way with two woofer-mid speakers and a tweeter. The two woofers are 5 inches (on the Oberon 7 it is 7 inches, random?), With the classic Dali cone made of pulp paper along with some wood fibers, a mixture that according to the company offers low mass with high rigidity.

The voice coil is of four layers and in order not to significantly increase its weight, causing deformation, aluminum wire and copper outer coating were chosen. But what makes the speakers stand out is the use of SMC technology (patented by Dali) which is usually used in more expensive series. It is essentially the element that surrounds the magnet. It is made of an alloy of iron and SMC (Soft Magnetic Compound), a soft material without air bubbles that has low electrical conductivity (1000 times less than that of ordinary iron).

This achieves a drastic reduction of the eddy currents produced between the voice coil and the magnet as well as the 3rd harmonic distortion. Twitter is a little bigger than usual, at 29mm. (instead of the 25mm that we most often find), it is a soft dome with a very low weight and cooling from ferrofluid.

It has a very good performance at its lower limits, close to the cross point (2.4KHz), large dispersion and reaches up to 26KHz. All models are designed to have maximum performance and a wider sweet spot on the listener rather than toe-in.

Behind the speakers there is a damping material that leaves their back free to “communicate” directly with the reflection hole. The hole is relatively large for the size of the cabin, is located at the bottom and is tuned to 43Hz with “lips” on both sides.

The Oberon 5 like most Dali is relatively easy to install and drive. We gave them air from the back wall to make the hole work properly and placed them parallel to the walls.

If our distance from the speakers is short, less than three meters, a light toe-in will help the picture. But if we have enough distance, the toe-in may reduce the focus and the sweet spot. Because they are placed exactly like this and due to the large dispersion of the tweeters, their interaction with the side walls is great, so pay attention to the respective surfaces.

But this way they manage to create a scene that goes beyond the limits of the speakers, in height and width. It is regular as far as the placement of the instruments is concerned, it does not “blur” in more numerous musical groups but lags a little behind in the axis of depth, giving a little more attention to the “front” of the scene.

The spectrum is balanced, we were pleased with its relatively neutral character, which does not allow frequency bands to be imposed or lost. It has a lively and pleasant treble that spreads beautifully in the space. They are sweet and create a nice upper end that is not forced to “show” at all.

They can go down, we are fed up with bass with volume, which fills the space, but would like a little more control and more lively regularity. The middle ones are soft, with the voice playing a key role, good articulation and a nice presence.

The Oberon 5 does not try to impress but respects the music and treats the middle area as it deserves. And if this speaker is nice at low and medium volumes, then from some watts and up the speaker impresses. The more “loose” bass gathers, the analysis becomes more descriptive but also its character is maintained.

Where many speakers start and “break”, “shout” the test model is relaxed and balanced showing the work that Dali has done in the deformations of the speakers. So if you like listening to tensions, do not be afraid of large SPLs, the only limitation is the power of the amplifier and the “tolerances” of the neighbors.

For those who are looking for a speaker in three digits and want a quality approach, they should definitely have the Oberon 5 in their “ears”.