DALI Oberon 7 Review • Capable of anything 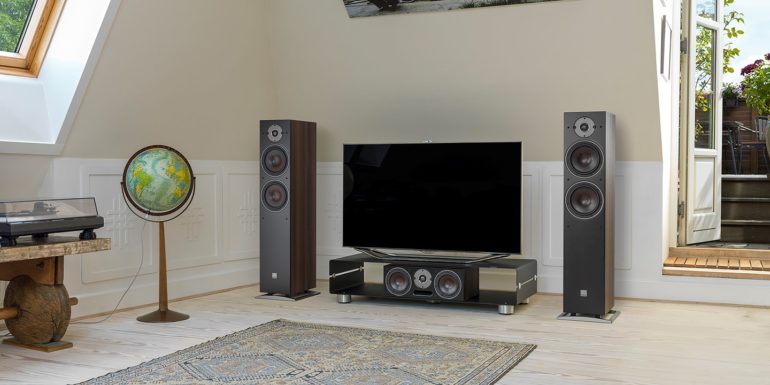 Let me remind you briefly that Oberon is a new series of acoustics, which the Danes exhibited at the end of the summer to replace the second most affordable Zensor line. However, the new columns cannot be called a 100% analogue of “Censors”. Mainly due to the use of much more advanced speakers in them, the magnetic systems of which are built using elements from proprietary SMC material. Hence, of course, a slightly higher cost. So both the quality and price gap from the most affordable Spektor series in the case of Oberon has become much more noticeable than it was in the days of Zensor.

There is nothing dramatic in such a situation; rather, on the contrary, the decision to “promote” the second line from the bottom is great news. For buyers, it means an opportunity to reach a higher level of sound with minimal financial losses. After all, earlier technologies like SMC were available only in the much more expensive Opticon. But for the most budgetary solutions, Spektor still remains, and to produce additional options in this niche is only to confuse novice music lovers.

Many are so accustomed to the “on” endings in the names of DALI models that they have long perceived them as proper names, not particularly trying to delve into the etymology. Some are not even aware that Spektor and Zensor did not receive the coveted particle precisely because of the absence of components made using SMC technology in their drivers. 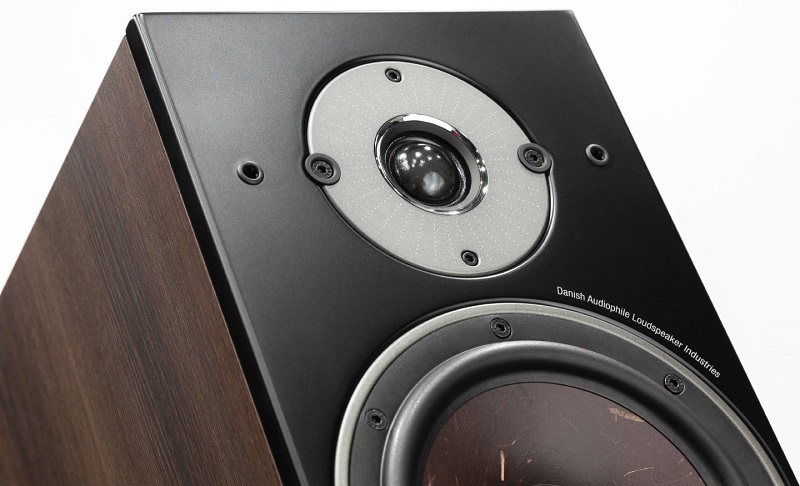 However, in our case, I cannot deny myself a small mythological digression, especially since it is directly related to music. So, in medieval Western European folklore, the name Oberon was borne by the king of elves and fairies, who appears in a mass of literary and musical works. The most famous of them are Shakespeare’s A Midsummer Night’s Dream and the cycle of Wagner’s operas The Ring of the Nibelungen. Actually, Oberon is that very Nibelung, just in German it is called Alberich.

By the way, it was the thunderous rumble of “Rhine Gold” that became one of the Oberon 7’s tests for bass dynamics – a perfectly fitting test for the flagship of the family.

So, with a height of a little more than a meter and a facade width of 20 cm, “Sevens” will look quite weighty even in a spacious studio. Moreover, in appearance, they pull at least one and a half of their price tag. That there is only one embossed finish with a wood structure. Of the four possible choices – white, black ash, dark walnut and light oak – I was most impressed by the latter. Even looking at the synthetic flooring almost point-blank, it is hard to believe that this is not natural wood.

The body itself is made of high-density MDF and reinforced with two cross-braces. All internal surfaces (except for the front panel turn) are covered with damping material – according to DALI engineers, such a move improves the dynamic characteristics of the bass reflex system and makes the bass more accurate, at the same time improving the attack in the midrange. 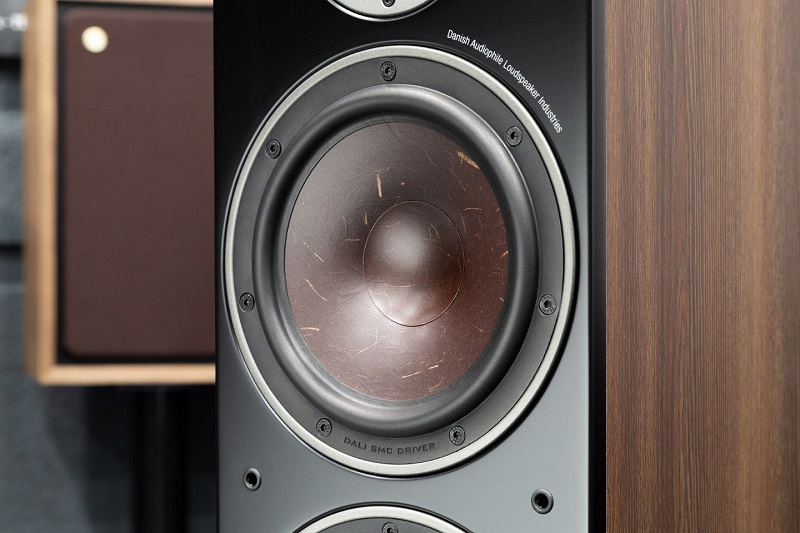 The 14.8 kg cabinet rests on a sturdy yet sleek metal base. It features a titanium-tinted aluminum frame into which spikes or rubber feet are screwed into.

The grills with slightly rounded corners, which are placed about a centimeter from the body, add lightness and charm to the design. In the case of the dark façade (the Black Ash and Dark Walnut variants) they are covered in black fabric, while in the White and Light Oak finishes they are covered with a very fashionable sackcloth. Which, however, introduces a slight defocusing into the sound.

On the rear surface of the case, a large bass reflex port with a bell and one pair of solid acoustic terminals was found. Biumping “Oberons” are not entitled to status.

Under the grill was a pair of 7-inch mid-bass drivers and a tweeter with a diaphragm enlarged to 29 mm made of an extremely thin and lightweight woven material. According to the developers, its specific gravity is significantly less than that of similar competitors’ products – 0.06 mg / sq. mm. For better cooling, a magnetic fluid is placed in the working gap between the coil and a powerful ferrite magnet.

In “sevens” the increased diameter of the tweeter is especially important, and not only because of the higher power of the system, but also because the RF emitter starts working here from a threshold of 2.3 kHz, that is, a hundred hertz lower than in the lower ones Oberon 5 towers and Oberon 3 older shelf units. By the way, the micro-relief covering the external tweeter cover is borrowed from the acoustic design of the much higher-ranking Opticon line. It forms a wide dispersion of radiation without adding additional color. 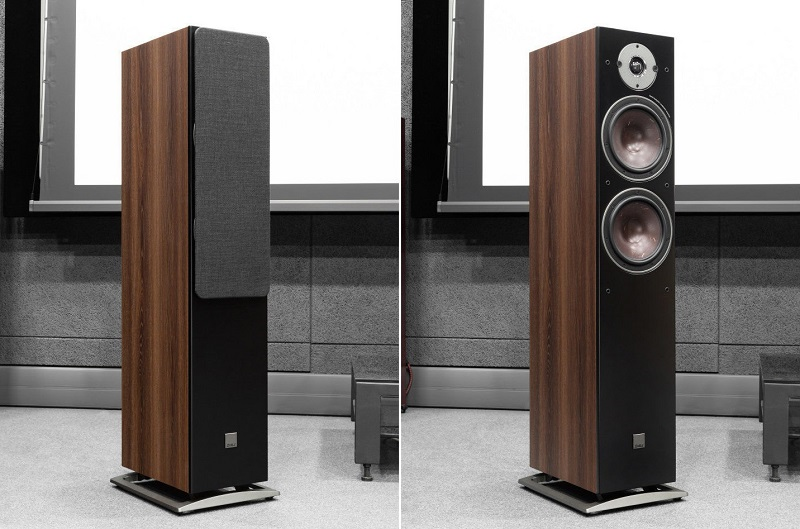 The entire line uses two-way frequency separation, which means that in our case, the mid-range / low-frequency range is sounded in tandem by two impressive speakers. Their diffusers, of course, are made of proprietary material, with an appearance well known to many audiophiles: against the background of a homogeneous cellulose mass made from strictly defined types of wood, strands of different sizes of individual fibers are clearly visible, designed to increase the rigidity of the diaphragm and suppress resonances in a fairly wide frequency range.

As I mentioned, their magnetic systems use components made using proprietary SMC technology. We are talking about parts formed from a granular compound with good magnetic permeability, but a sufficiently high electrical resistance. This movement improves the uniformity of the magnetic field around the coil and significantly reduces the distortion caused by eddy currents.

True, in the Oberons speakers only a 10-mm central core is made from SMC, while, say, in drivers for Callisto or Rubicon, this element is made entirely of SMC, and even equipped with a copper cap. Nothing can be done, these are models of a completely different weight category.

Another advanced technology in Oberon speakers concerns the performance of voice coils, which are wound in four layers of copper-plated aluminum wire. 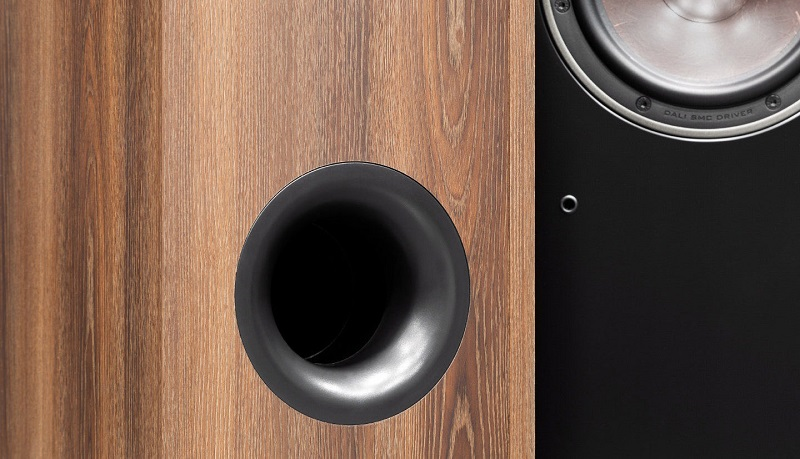 The test path used Naim Uniti and Densen B120 components connected with Atlas Hyper speaker cables. You cannot call the Oberon 7 a tight load, but running a little ahead, I will say that it is quite sensitive to the amplification class, and it is definitely not worth trying hard to save money here. Brightness and energy without proper control can turn into rudeness and inattention to trifles.

There should be no problems with the placement of speakers in the room, since the declared minimum distance from the bass reflex ports to the wall is only 20 cm. In my opinion, it is still not worth shielding the bass so sharply, but from a distance of 60–70 centimeters they start to sound really harmonious.

One of the main features of DALI acoustics is the ability to maximize the potential of high frequencies, and the new line is fully consistent with corporate traditions. The enlarged diaphragms of the dome tweeters create a light, well-structured musical fabric at high frequencies with lively microdynamics and very good resolution. Another plus, mostly attributable to the 29mm domes, is the voluminous music scene with clearly localized musical imagery. I even noticed a couple of times that on phonograms, where special attention was paid to the positioning and / or movement of instruments during the recording, the scene became so embossed that even the melody slightly faded into the background. But, I will emphasize again, this happened in full accordance with the author’s intention of the work.

In general, the main word when describing the sound of the Oberon 7 is “expressiveness”. They clearly, but emotionally act out the high ones, they take up vocals no less effectively and, without reducing the pressure, go on to the bass. But the most important thing is that across the entire frequency range we get not just bright or embossed, but absolutely cohesive and homogeneous sound. In which, by the way, there really is a decent level of clarity and microdynamics of the vocal range, for which we should certainly be grateful to SMC, as well as thin rubber suspensions of the mid-bass drivers. To this we add deep, moving bass with good control, which, unfortunately, cannot be properly felt by the owners of other Oberon models. 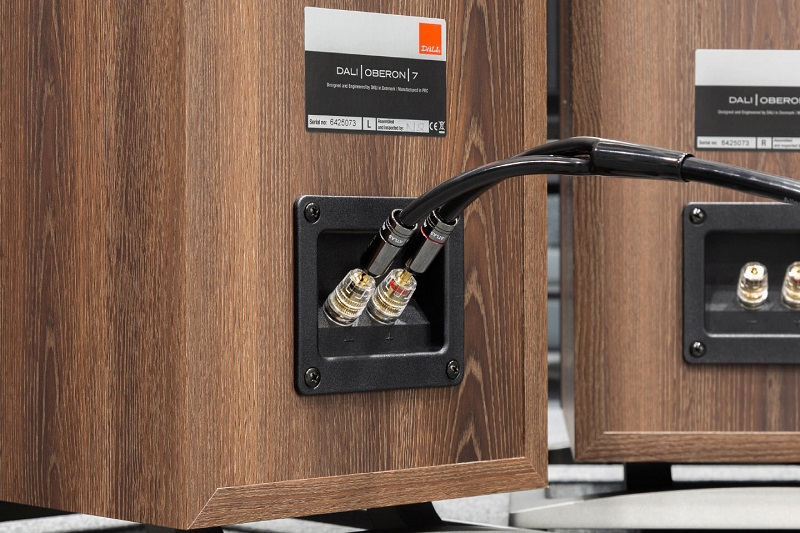 So, Dali Oberon 7 – speakers are bright, energetic, capable of supporting even the most complex rhythmic pattern of the soundtrack and rendering a very voluminous and detailed music scene. Unfortunately, I was not able to listen to them as part of a theatrical installation, but I have practically no doubt that very few classmates will be able to compete with the new DALI line in this element.

On the other hand, it is clear that in terms of absolute musical resolution or tonal sophistication, it is difficult for them to compete with their older brothers, for whom DALI engineers, of course, have reserved some trump cards.

But if you get along with the boring “Sevens” characters, you definitely won’t have to regret buying. Their light energy and lively dynamic musical style simply charge you with positive. This is how truly modern speakers should play for the modern rhythm of life.