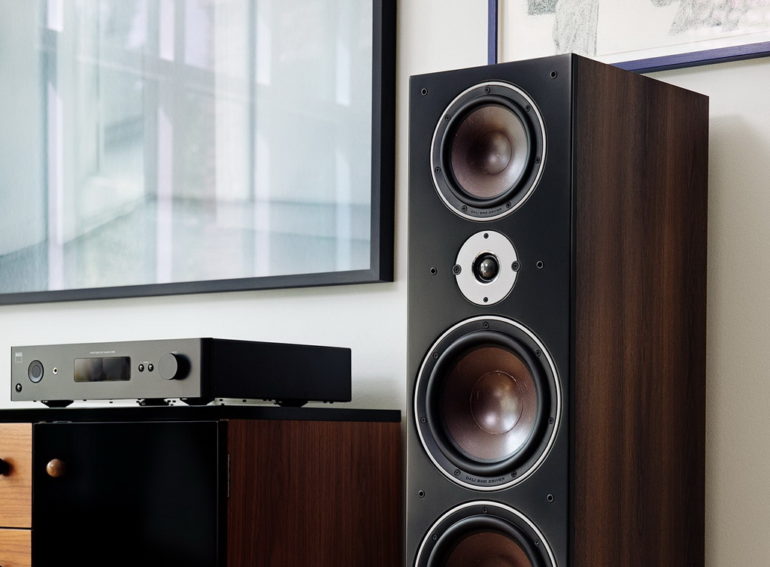 The DALI OBERON is a real breakthrough: it is the first entry-level speaker to use the patented SMC technology, which dramatically reduces nonlinear magnetic distortion. The result is your favorite music sounds even better. Oversized tweeters, wide dispersion paper woofers and elegant Danish design make the DALI OBERON series the new standard for budget audiophile acoustics. It’s time to rediscover the magic of music! The OBERON series of two compact bookshelf models, two floor-standing, one wall-mounted and one center loudspeaker has everything you need for every need. Each model is ideal for stereos and fills your home with great sound.

The OBERON series speakers will easily fit into any interior, into any room. The driver materials, crossover design and cabinet geometry of the OBERON series are optimized for a wide dispersion pattern. This achieves a homogeneous and high-quality sound even when listening outside the listening area, with an offset from the center axis. This is important – we don’t always sit right in front of the speakers when we listen to music. Another plus of this approach is a significant reduction in harmonic and frequency distortion. And this is also the reason that DALI speakers do not need to be tilted.

The DALI OBERON series is available in four finishes: black ash, white, dark walnut and light oak, with matching black or white front panels. The bass reflex rear port is designed for optimal integration into the room, while the elegantly shaped aluminum plinth gives the floor standing units a sophisticated look. The OBERON series also features a new grill design for the first time, giving the speakers a stylish and modern look.

The Oberon 9 floor-standing loudspeakers are the flagship of the new Oberon series of high-end DALI loudspeakers. These speakers are based on the latest technology as well as proven technical solutions such as those found in the Opticon series. The speakers have a well-thought-out design, in their appearance, they successfully combine the metal edging of the emitters and the matte finish of the front panels, as well as high-quality vinyl covering of the cases. Unlike the Oberon 7, the previous flagship of the line, the Oberon 9 received another speaker above the tweeter – a 7-inch midrange. The result is a three-way system: two 9-inch speakers, located under a 29-mm soft dome tweeter, play out extremely low-frequency range. According to the developers, this has resulted in a “powerful” sound, usually achievable in this price range only with a subwoofer, but the acoustics remained quite compact in size. The novelty plays in the range from 35 Hz to 26 kHz, the sensitivity of the model was 90.5 dB.

For the rest, Dali Oberon 9 is a classic representative of the series: drivers with diaphragms made of a proprietary wood-fiber mixture are made using a soft magnetic compound SMC, the tweeter is recessed into a small waveguide, small cases stand on a wide metal base, the acoustic design is bass reflex, with ports opposite each emitter. There are only two terminals for connecting to the amplifier. With dimensions of 260x1172x406 mm, the acoustics weighs 37.1 kg.

Three years ago, DALI introduced the Oberon family of speakers, which it defined as High End, affordable … for everyone. Of course, such a contradictory wording was then taken as a joke, but today there is a real reason for the hype. Look, what giants have led the “Oberon” gang! We all know that ruble prices for high-end loudspeakers due to monetary inflation have long soared to seven-figure sums. There is also the so-called Aordable High End, and the price tags there are still six-figure, but such a technique, of course, also cannot be considered “a commodity for everyone”. 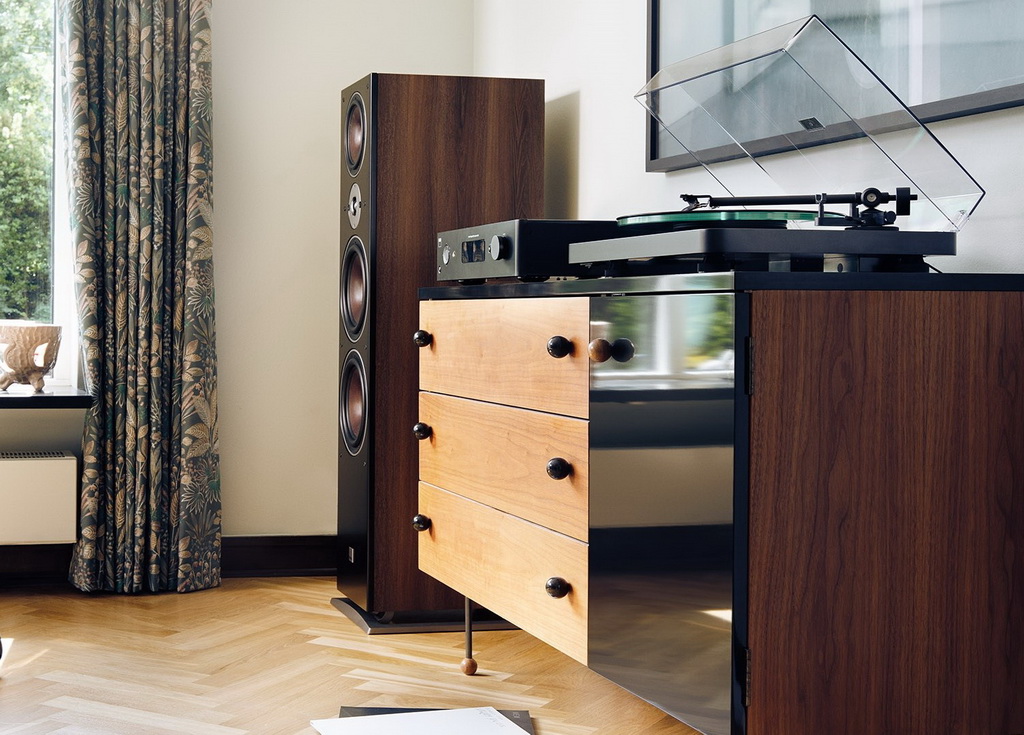 However, Danish Audiophile Loudspeaker Industries does not want to put up with these. They took their proprietary electroacoustic technologies from top-end speakers, thought about how to rework them for large-circulation production, then they embodied all this in the Oberon series and, in order to further reduce the cost, launched the production of the line not at home, but in China – in the same place. where other “folk” DALIs are also produced (the hi-fi Zensor series and the low-budget Spektor).

In part, Oberon 9 is DALI’s answer to market demands. Among hi-fi lovers, there are many who are convinced that really cool speakers simply have no right to be small. But when you start picking up a large volume speaker with bass drivers not even 10 inches in size, but at least 12 or all 15, then a rather meager picture emerges – there are only a few models on sale stylized for some kind of “old-school” wide monitors, plus a few more “Towers” with large side bass radiators, which are more suitable for theaters than for stereo. For any serious floor construction with a large head on the front shield, they will ask for a real High End. What DALI has done is very special. In Dali Oberon 9, which, by the way, can now be safely called the largest-caliber in the entire gamut of the manufacturer, there is no evidence of belonging to any of the extremes. The price is more than moderate, and the design, at first glance, is generally standard – it does not follow the now fashionable nostalgic trend for column-boxes from the seventies and does not try to surprise with the dimensions of the refrigerator. Of course, “nines” are tall models, they are already 16 centimeters higher than “sevens”. But the width and depth of the new items were added only by 6 centimeters, thus retaining the firm slenderness. Take a closer look, by the way, at the coasters. They are made in such a way that large “cabinets” with a volume of more than 100 liters seem to float in the air at all.

The enclosures for these speakers are assembled from high-density MDF panels and finished with high-quality vinyl film, and there are not four design options, but only two. Yes, the manufacturer saved on the “furniture” component, but introduced advanced speakers into inexpensive acoustics.

In particular, the buzzer is distinguished by an ultra-light dome, increased in diameter to 29 mm. This is done for the sake of wider radiation dispersion. On the rest of the drivers, we see diffusers made according to the proprietary DALI recipe – made of cellulose with an admixture of wood fibers (they weaken unwanted internal resonances in the material). But the main difference is inside: a 10-mm insert made of “soft magnetic compound” SMC is placed in the magnetic circuit under the four-layer voice coil (wound from a copper-coated aluminum wire). In the most expensive DALI heads, the entire magnetic system is made from this material, which practically does not conduct electric current. But the hybrid economy option is also effective: due to the weakening of unwanted eddy currents, the level of the third harmonic is more than halved (to about 0.35%). 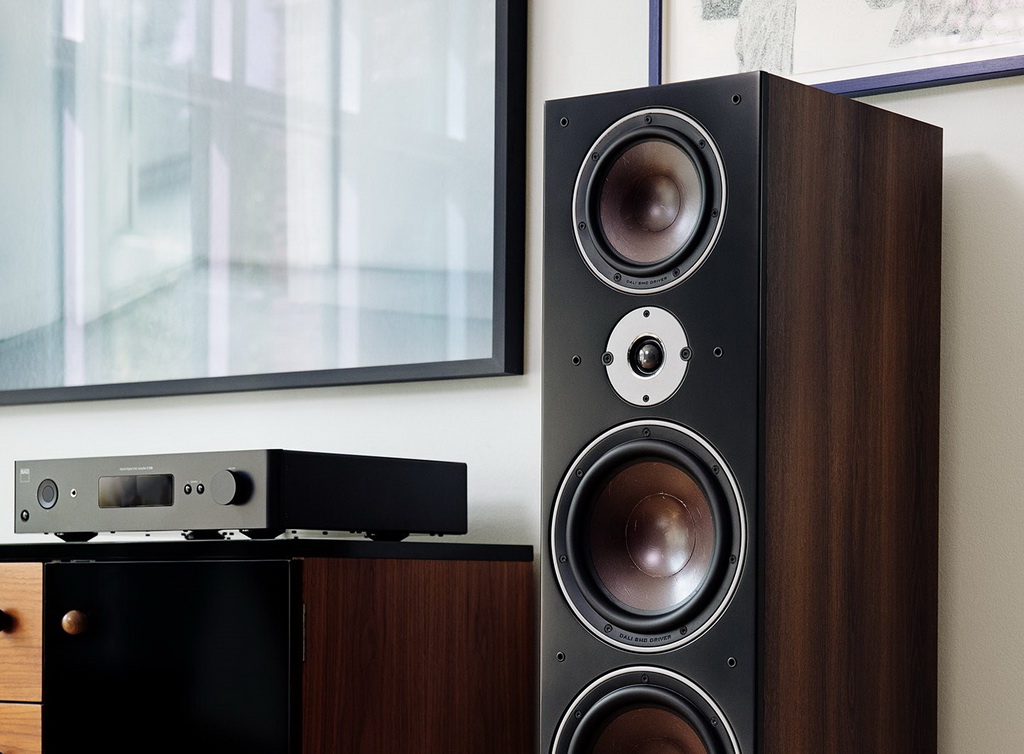 This is where the resemblance to the rest of the outdoor models in the series ends. The very concept of the “nines” is different. In Dali Oberon 5 and 7, for example, the division is simplified, two-band, and in these models the filtering is carried out according to the classic three-band scheme. The electromechanical parameters of the 17cm midrange are optimized for operation in a fully enclosed design. Its band is noticeably shifted upward (780 – 3400 Hz). And for the low-frequency section, new woofers of a non-standard 23-centimeter diameter have been developed. A pair of these diffusers are equivalent in weight and area to one large 13-inch. And the most curious thing: each low-frequency driver works strictly for its own selected volume, created inside the speaker cabinet by an inclined partition, and for a “personal” bass reflex with a setting of 31 Hz.

Note that nines have medium sensitivity. Engineers did not overclock this parameter, because it is fraught with a deterioration in all other characteristics. But this does not mean that the speakers turned out to be “heavy”. To test the new products, we stocked up on different amplifiers, but when the systems produced a stunning drive already from the Cambridge Audio CXA61 – an interactive speaker that “draws” sound wonderfully, but is somewhat melancholic in temperament, it became clear that it was better to pair the Dali Oberon 9 not with a thug, but a pure pedant. Personally, I was most pleased that the Dali Oberon 9 does not have a cheap “empty” superbass, or some kind of frozen heavy “fat” from the lowest frequencies (from which, by the way, room resonances can easily be excited). The entire low-frequency register is rendered as if you were listening to music in a studio on some huge classic monitors. These are usually mounted at a distance from the console on powerful ceiling brackets, they are flawlessly linear at the bottom, and their dynamic delivery “to the chest” is generally remembered forever. It’s very similar here. The attack is impressive, the hit is not just daunting, but with sophisticated details, the after-sounds are not tightened anywhere, the tight and long bass lines never get lost in a droning lump. I doubt that there will be any other home speakers on the market today that can offer the same confident and agile bass for the same price. Moreover, from a transistor power supply, the physical limit of which is rated 60 – 90 watts. And in the listening room with an area of ​​about a hundred “squares” …

But even if there are competitors, they are unlikely to offer their “meat” dish with an equally rich “side dish” of merits. In the Oberon 9, for example, the entire drum band, including the low mids where the rich trail of harmonics extends from the drums, is delivered as a unit, very linear and with full dynamic range. In the triphonic system, such a unity of strength and clarity is also achieved, but, as a rule, at a very high cost. The nines have a slight accent in the middle, somewhere around 700 – 1400 Hz. But it is not highlighted enough to reproach acoustics for nonlinearity. And sometimes it is even a plus – all the “tint” nuances of the sound of many musical instruments on recordings that are not rich in microdynamic background appear better.

The imaginary images in the soundstage of Dali Oberon 9 are tangible, dense and slightly larger – in a word, “grown-up”. To achieve their ideal contouring and clear visualization of plans will, of course, not be as easy as with any high-precision acoustic hi-end, but if you are not too lazy after installing the “Oberons” in your room, step by step select the optimal distance from the walls, then – stereo base, and then – the directivity of the speaker (by the way, it is not necessary to achieve an accurate aim at the listening point for this model), you can get a believable three-dimensional stereo picture with quite clear focus.

The upper register captivates not with some special beauty or atmosphere, but with its smoothness. The acoustics slightly colors the sound only in the 6 – 8 kHz region, adding sparkling “crash” shades to the cymbals ringing, but it never comes to frank harshness. Above 10 kHz, by ear, everything is like a ruler, so the sonorous “silver” part of the range, as well as the higher “air” band, is surprisingly clear. So the only reminder of the true price class of the speakers is their high frequency resolution – it is not as thin and sophisticated as the older DALI models or any other speakers with expensive tweeters. However, even from Dali Oberon 9, you can get closer to the High End, if you listen to music on these speakers with even more serious components and cables. This is definitely not the case when acoustics puts some class restrictions on other components of the system.

Korean Inventor made a speaker with visualization based on ferromagnetic fluid