The oldest bookshelf speaker in the series, the DALI Opticon 2 Mk2 combines relatively small dimensions with powerful, rich sound. The speakers have a classic two-way configuration, and are made on the basis of proprietary emitters. The enclosures of the DALI Opticon 2, like the rest of the speakers in the series, are assembled by hand at the company’s factory, which ensures a high quality finish, as well as precise adherence to technology. The speakers are available in three quality vinyl finishes that match the front panel with black or white piano lacquer.

The Opticon 2 Mk2 features a 6.5-inch woofer with a wood fiber / paper cone, an excellent material that gives the diaphragm high rigidity and light weight. Loudspeakers with such cones are traditionally used by DALI in their high-end acoustics, in particular, the flagship speakers of the Epicon series. Another patented technical solution used in these speakers is the Soft Magnetic Compound (SMC) magnetic system, which has increased linearity and provides a minimum level of distortion. The woofer is loaded onto a bass reflex, the outlet of which is brought out to the rear panel. The woofer is paired with a dome tweeter specially designed for use in the Opticon series loudspeakers. Its diaphragm has a diameter of 28 mm, is made of fabric, it is very light and effectively resists parasitic resonances. Despite the fact that the Opticon 2 Mk2 does not use an additional ribbon tweeter, thanks to the optimized design of the dome tweeter, the speaker’s operating range has been extended to 27 kHz (at a level of – 3dB). The speakers are connected to a crossover filter made of quality components, and a pair of reliable screw terminals are designed to connect to the amplifier.

The DALI Opticon 2 Mk2 speakers noticeably benefit from sound quality when placed on specialized stands with good damping characteristics. By the nature of the sound, the acoustics is quite universal, and can be used both in stereos and in home theaters.

Bookshelf acoustics most often balance on the brink in the unequal struggle between engineers and the laws of physics – and compromises are inevitable here. But this is MK2 – what if there will be no compromises? Let’s find out in today’s test. On the budget, we are targeting the middle price segment in order to determine the general direction of the concepts of the updated Opticon MK2 line. In terms of the scale of the renovation, this is the case when not a single facelift. Following the path of a major reconstruction, DALI engineers made adjustments to the hardware part of the acoustics. In this testing, I will try to present both the construct and the sound features of the Opticon 2 MK2 for the reader. The designers of the Opticon MK2 line do not eat their bread in vain: for my taste, the external changes that have occurred in the entire Opticon line came in handy. If we abstract from taste, this is the path towards minimalism. And whoever says anything, but when modern and technologically advanced acoustics look appropriate – it is pleasant to look at the eye, and it is not difficult to place it into a home design. I think that’s what DALI was striving for. This is confirmed by the use of matte paint in all three color options, and the white matte Opticon 2 MK2, which took part in today’s test, simply won me over at first sight.

Below is the driver responsible for the reproduction of low and medium frequencies. Just like its predecessor, it is armed with an SMC magnetic system, which is designed to work towards eliminating parasitic electro-acoustic phenomena. Similar to the HF driver, this system is originally rooted in another senior line, the Epicon. The driver cone itself, with a diameter of 6.5 inches, is traditionally made of paper-wood fiber. The woofer has a matte black bezel, regardless of the acoustics color, and the tweeter is located on a metal panel of the same color, which visually unites both drivers. On the rear panel, we are greeted by a fairly large diameter reflex-type bass reflex (Dual Flare), which, moreover, has a fair amount of depth. If you look closely into its bowels, you can see the magnetic system of Twitter. 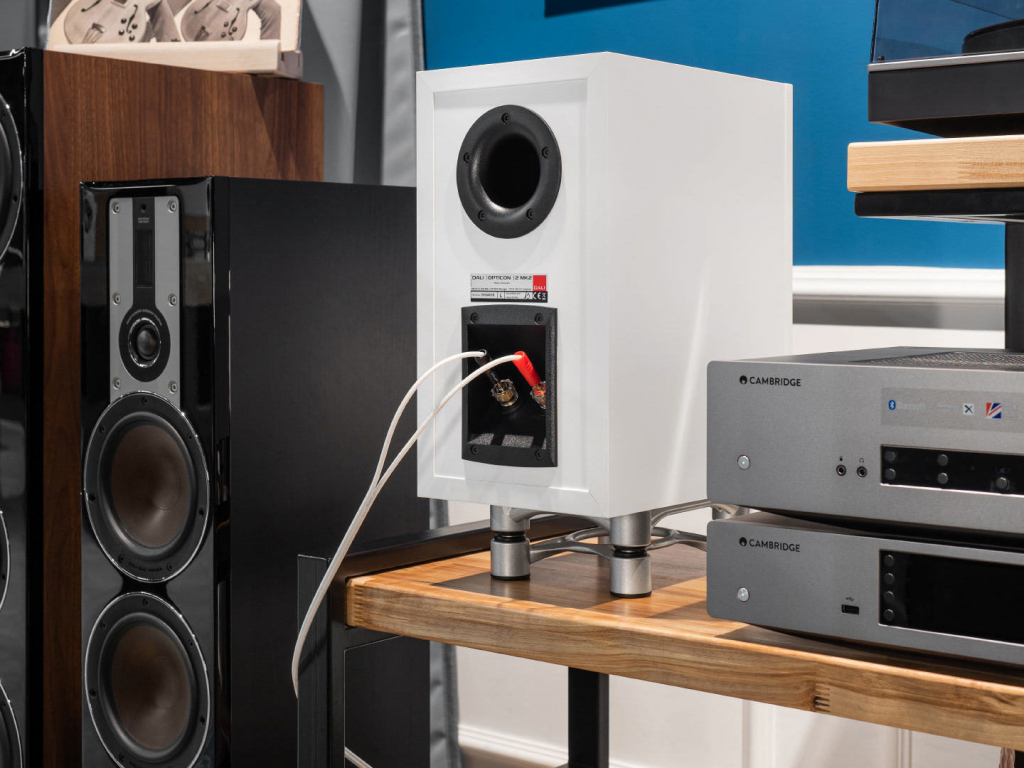 With each new track, with the participation of a grand piano, the opinion was more and more asserted: “opticons” and grand pianos were simply made for each other. The calmness and regularity of Goldmund’s In A Notebook immerses the listener in the quiet creaks of old keys, and each hammer has a moment of touching the string, as well as soft and smooth decays. It really was a pleasure to listen to this track – and the Opticon 2 MK2 played an important role in this. But it would be high time to add expression and color – on a gray winter morning it will be very useful.

But no matter how strong the tension of the “opticons” was, in the bass part they passed. And the point here is not in the insufficient quality of the bass, but in its quantity and depth: for this track, the available indicators were clearly not enough. The same incident happened when the acoustics met Max Richter. The Shadow Journal has unfortunately lost its magic. The chasing of the typewriter, the voice of a woman, the violin and the harp are only the title pages, and the most interesting thing opens after them – the deep bass part is designed to ensure maximum immersion in the atmosphere of the track. But the secret of the dark magazine was not revealed this time. However, looking at the passport characteristics of the acoustics, I calmed down a little. Apparently, after the impressions of the piano, the expectations were somewhat overestimated – and then you should look for something less extravagant in the low frequencies. Apparently, Mr.Bass is busy today, instead of him there will be his colleague – MidBass. Here Opticon 2 relaxed, but did not lose their grip, because it was not difficult for them to strike mid-bass parts. Disturbed’s “Down The Sickness” performed well, eliciting a standing ovation from the room adjacent to the listening room. The “opticons” certainly do not have enough detail and transparency, the intelligibility of the parties of different instruments is at a good level, no matter how complex they are. And for most of the track, the bass was enough to keep the foundation and beat out the rhythm.

Along with the piano, at this point of the program, the “opticons” also have something to brag about. If the listener’s priority is female vocals, then this acoustics can touch the subtle fibers of the music lover’s soul. Whether it’s Diana Kroll, Madeleine Peyroux or any other performer, she will sing lively, clearly and openly. The articulation that was inherent in the piano will also remain. This tells us that the work on stitching the drivers was done very successfully – and no flaws were found. Working with male vocals remains at the same high level as with female vocals. The timbre of low baritones sounds recognizable, without critical changes in key. Vocals are framed by thin, sparkling cobwebs when their range falls within the reach of the tweeter. And the high frequencies themselves have a good elaboration, although they often tend to slightly prevail and draw attention to themselves. Accordingly, the quality of the listening records will have to be worked on. However, “opticons” are not prone to sibilants if they are not in the composition itself. With regard to the construction of the scene – there were no surprises here. It is uniform and fills the entire space between the acoustics and beyond. The positions of the instruments and vocalists are easily guessed – both horizontally and vertically.

Their images are heard quite large, given the small dimensions of the acoustics. However, from time to time attention is drawn to the lack of depth.
As a result, the DALI Opticon 2 MK2 bookshelf acoustics showed a very high overall sound level, although they did not manage to avoid some of the compromises that we feared at the very beginning. Thus, it will be difficult to rank this acoustics among all genres – after all, it has some limitations. On the other hand, they can be considered rather arbitrary, because in the issue of low frequencies, a lot depends both on the control room in which it is planned to use acoustics, and on the arrangement of acoustics in it. And in some cases, these moments can play in favor of the “opticons”.

Otherwise, when choosing acoustics, when vocal-jazz ensembles have an advantage in the repertoire, we can safely recommend the Opticon 2 MK2. With these musical directions, they keep pace.