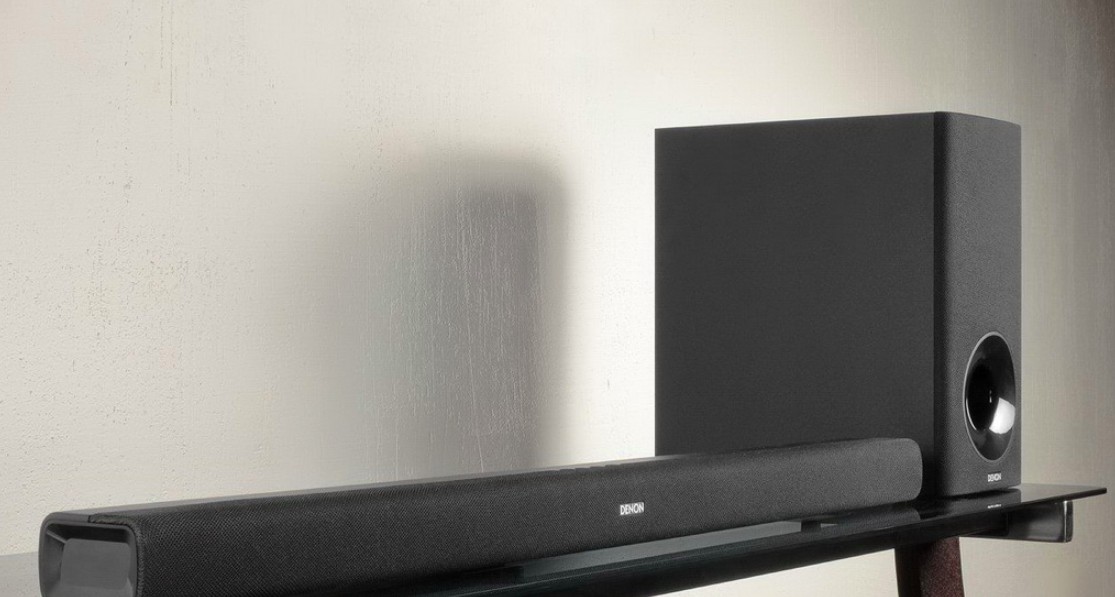 The Denon DHT-S316 Soundbar expands your TV’s acoustics for great immersive surround sound from movies and TV programs. The Denon DHT-S316 is only 5cm tall and comes with a wireless subwoofer. This kit gives you the opportunity to get branded dynamic Denon sound and support modern surround formats Dolby Digital and DTS, and built-in Bluetooth allows you to listen to your favorite music from your smartphone, tablet or personal computer. The design of the Denon DHT-S316 soundbar provides for both the placement of the speakers on the shelf under the TV and for mounting on the wall. Despite its compact size, the soundbar houses two midrange and two tweeters for clear and emotional sound, while a powerful subwoofer adds energy and volume to the sound. The wireless subwoofer can be hidden in any part of the room without taking up space, but creating a deep and spacious sound effect.

The Denon DHT-S316 soundbar reproduces Dolby Digital, DTS and the latest Dolby Virtual Surround for impressive surround sound without the need for rear speakers. This is made possible by the use of advanced psychoacoustic sound processing algorithms. For users who would like to hear dialogue more clearly when watching TV or movies, there is a special Denon Dialogue Enhancer setting that makes voices clearer without having to increase the volume. ARC (Audio Return Channel) technology eliminates the need for additional analog or optical cables when connecting the soundbar to your TV. You only need one supplied HDMI cable to connect your speaker system to your TV, making connecting your entire system quick and easy. Also, thanks to this technology, only one TV remote control is enough to control the volume.

Built-in Bluetooth enables wireless connection to the soundbar of your phone, tablet or laptop. This gives you access to your favorite music on your mobile devices, streaming services and Internet radio with the same Denon-branded sound quality that you enjoy watching TV.

It is gratifying to see when even the most affordable thing, at least externally, is made with the same accuracy and attention to detail as expensive components – it has perfectly flat surfaces, minimal gaps, impeccable drapery with acoustically transparent black textiles, stylish buttons … the Denon DHT-S316 is not surprising – the hallmark of Denon technology has always been a common production culture and high quality standards (regardless of the place of production).

Another thing is surprising: the set, taken out of a container of modest size, is so weightless and laconic that at first it is perceived as a toy or even a dummy made on a smaller scale. In the characteristics – no information about the power of the amplifiers and the composition of the speakers. The main element, the soundbar itself, does not even reach a meter in length and is distinguished by a very thin body with a height of less than six centimeters. But if this component still has attributes that give out in it belonging to audio equipment (connectors on the rear panel, shiny recessed volume control and input selection buttons on the top surface, LED indicators on the front), then the subwoofer does not at all look like its counterparts – this is just a black parallelepiped with a round bass reflex hole in the front and a power cable socket in the back. No inputs, no settings, not even a power switch! All this economy, as it turns out, is replaced by the microscopic BAR SYNC button, which you need to use only once, when you plug both units into the outlets. This will send a command to the soundbar to establish a wireless connection with the bass machine, activate the power control channel and all the necessary settings for the low frequency band.

From this moment on, the kit is completely ready for use. Using the supplied HDMI cable, we connect the soundbar to the HDMI ARC jack on the TV panel. If the TV does not have a modern interface with a return audio channel, then we remove the optical cable from the set and display the soundtrack on the soundbar using it. No TOSLink? It doesn’t matter either. We use a linear analog connection, for which the Denon DHT-S316 has a thin “jack” input. In the latter case, however, we will no longer be able to use the Dolby Digital and DTS decoders built into the soundbar. But even such a laconic switching arsenal, which the Denon DHT-S316 has, allows you to expand the system capabilities by at least a couple of sources – for example, turn on a game console and / or a satellite box.

Realizing that people will buy such a device for the sake of one simple, but far from trivial goal – to achieve the best sound when watching any content on TV – the engineers did not complicate the set. Only Bluetooth is available from wireless interfaces. There are no network, streaming or multiroom functions, on which, by the way, we economize very well (if such functions are still needed, then here or here. 3D sound decoders like Dolby Atmos or DTS: X for audio equipment of this level are still rather overkill – TV broadcasts in object formats will not soon become everyday, and all new films with high-altitude super sound will for a long time be supplemented by the obligatory standard soundtracks in 5.1 or 2.0 format. What do you really need? Above all – legible and natural sounding. To this it is not superfluous to add a clear transmission of dialogues, the illusion of surround sound, simplicity and flexibility in setting up effects. Now we look at the remote control for the Denon DHT-S316 and find all the signs of the above on it.

But do not rush to press all the buttons at once when your soundbar starts making the first sounds. Use the factory default mode for the initial setup. For example, how close to the front edge of the TV stand you place the soundbar will greatly affect the tonal balance in the mid and high frequencies. The most neutral result – surprisingly smooth and musical – is when the speaker bezel is flush with the edge of the TV stand. The farther the lying soundbar is pushed inward, the stronger the horn effect will appear, amplifying the mid frequencies (which, by the way, can also be beneficial in large or heavily damped rooms). And when placed on a wall, the lower mids and upper bass naturally stand out. But this additional dynamics comes at the cost of losing spatial depth in the sound field. Likewise with a subwoofer. Closer to the walls – more bass. Closer to corners, more prolonged hum. But at some point in the room, you will definitely be able to find a place where the sound of the sub will delight both the power of low-frequency effects and their intelligibility. Since it is wireless, such experiments are greatly simplified.

Now that everything is set up correctly, you can enjoy the result. The most valuable quality of the Denon DHT-S316 kit, in our opinion, is that it doesn’t sound small. Its reproduction is moderately dynamic and smooth. There are no obvious tonal deviations. Coloration at mid and high frequencies is barely noticeable. This is felt at least by the fact that during the transition from one program being played to another, there is no obsessive technicality or monotony in the interpretation of sound.

The detail (as well as the presentation of all sonorous or harsh sounds) is softened, but this is rather a plus – TV broadcasts and soundtracks of films in compressed 5.1 do not abound in those nuances that need to be reproduced. A slight disguise is also beneficial when you start listening to music from your smartphone via Bluetooth. By hi-fi standards, the sound lacks fullness of timbres and subtle shades, but digital “dirt” and tiresome distortions are not felt. As they say, modestly, but neat. But have you forgotten that there are also different modes? Click on the Movie button and get a more expressive reproduction of the effects. The sound picture becomes larger, percussive and rattling sounds are emphasized, and sometimes echoes of the rear channels come from somewhere in a very explicit form.

When you press the Music button, the processor enters the processing mode, which, according to subjective feelings, slightly “degreases” the bass, highlighting harmonic components and details in the main band. And although this is not entirely similar to real stereo with its ideal localization and separation, the mode does not interfere with listening to music at all – it turns out emotionally and convincingly. The sound, oddly enough, is almost free of the compression and lightness typical of small speakers.

And the Night mode affects the most – it almost completely “covers” the low bass, at the same time squeezing the dynamics of the middle and upper registers. But it is worth resorting to it not only when watching movies at night, so as not to disturb the neighbors. It is also useful for enhancing intelligibility when setting the volume at the lowest “background” levels. The influence of the three Dialog Enhancer buttons will not be very noticeable on regular TV programs, talk shows and documentaries, where the voices of the presenters are already brought to the fore. This also applies to almost all dubbed foreign films. But if you want to watch some spectacular Hollywood blockbuster in the original, with the dialogues of the actors, then all three modes can come in handy.

The first works by ear in the 150 – 500 Hz band and slightly emphasizes male voices: bass, baritone, tenor. The second is more evident in the “female octaves” (300 – 1000 Hz). Well, the third one captures both bands and gives the most intense selection of voices against the background of effects. Yes, this is the simplest correction, but it works very delicately without distorting the basis.

With Denon DHT-S316 we get a reproducing system with convincing sound even in difficult conditions and the ability to connect different sources. And at the same time it is extremely compact, which can be a decisive factor for a modern interior.