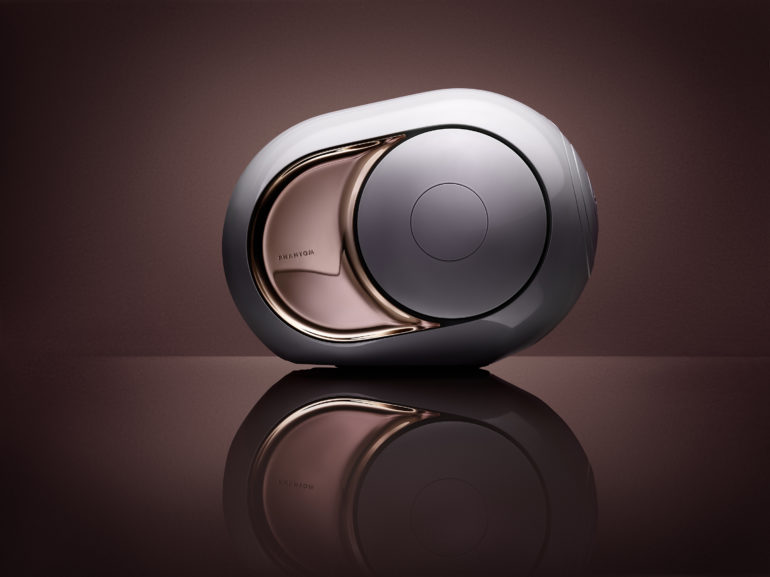 When Devialet’s Phantom was introduced a few years ago, the whole world of… sound was dumbfounded, mainly by the fact that the speaker format was completely different from stereotypes.

Its spherical shape looked more like a motorcycle helmet, an object from Star Wars or a “frog” as some called it. It was a powerful active and network speaker that played alone, in pairs (as a stereo) or in formations (as a multiroom).

The Phantom is designed to be mounted on a desk, on a base, on a wall or even on a tripod. He wants a base that can withstand since this innocent little speaker turns into a sound bomb if we are not careful.

After the original (white) Phantom, the 3000W Phantom Silver was released and comfortably reached 105dB, huge numbers for a wireless active speaker. The price of Silver is still 1,190 euros. Now the French Devialet brings the Gold version of the Phantom.

Phantom Gold, which looks like Silver – except for the “gold” sides – has more power, more decibels and… more euros.

The speaker “hides” 108 patents inside, which are all the secrets of Devialet, its amplifier for example is a chip the size of a square centimeter, the size of our fingernail.

The speaker chassis is and remains steady even when producing 108dB acoustic pressure.

Let’s take a closer look.
Forget the bizarre form, the sound and the large numbers of its features. The Phantom series is designed to bring to the user almost all modern wireless technologies in a simple and understandable way. 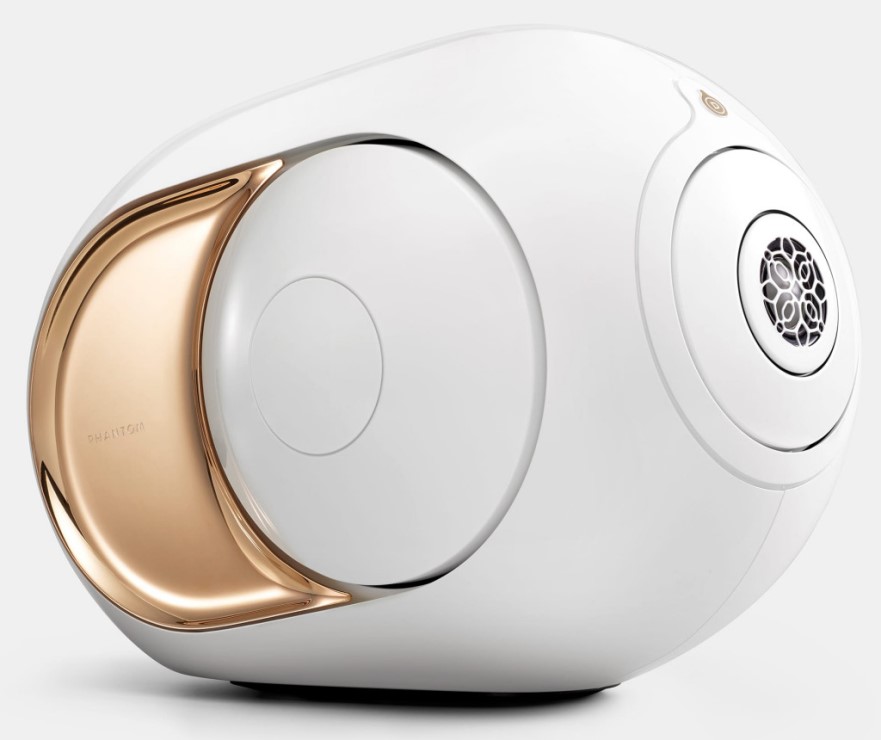 Plug in the Phantom Gold, download the Spark app and an endless world of music is available. It plays via Wi-Fi or Bluetooth, but also wired via Ethernet or even from a single optical input, which is hidden behind it to connect maybe a TV or a CD player.

In case you are so lucky and get two Phantom Gold, for stereo situations, you need an extra box – the Dialogue – which acts as a bridge between your network and the speakers. In this way, Phantoms become a multiroom system for the home, which “extends” up to 24 speakers.

Gold is immediately recognizable by the other Phantoms from the 22-carat rose gold side bearing, but also by the gold Devialet logo in the center front. It is not portable, it needs connection to the socket to play, while its 11.4 kg allow easy transport, since we can comfortably hug it.

Its base is non-slip and “sits” very well wherever we place it. The white power cord is specially designed so that it does not disturb the design harmony of the Phantom. Installing the speaker is just a game, as long as we download the Spark application. Simpler to use, more stable and more “open” application we have not experienced from any other audio device.

The use of the app is done even with one hand, so carefully it is designed. Phantom Gold works immediately and smoothly as if it has been waiting for our orders for years.

We can play internet radio, Spotify Connect, Deezer and Qobuz (including hi-res), Tidal, but also AirPlay. The important thing is that the Phantom design team does not stop developing the speaker at the moment, so it often sends firmware updates so we always have the latest features available.

The same thing happened when we plugged the speaker into the network, the same thing will happen now with Apple’s new AirPlay 2. If you want to listen to your own music files, then Spark should be running on our computer and we should have a music folder.

In the application there is a Favorites option in which we save our favorite songs and let them not belong to the same source. For other services, you can also stream via Bluetooth with support for AAC and aptX. But we were also informed by Devialet, the speaker will soon have Roon support and thus will be ready for hi-res collections.

We only had one speaker to test, where the result was a stereo mix of the recording. But we have also heard of Phantom Gold in solid state, with two speakers. The experience of a stereo setup is definitely much more exciting, and we do not need to analyze this for you.

INDIVIDUAL BEAST
Phantoms may look like that, but Gold is noticeably better than Silver. You not only see this on Gold’s best speakers, but you hear it too.

On the front there is a titanium tweeter, while the guides for the middle and bass are the same as the Silver. Those who have no idea about the existence of the Phantom speaker should tell them that it looks like a point source of pulsating sound.

With a huge concentric loudspeaker that has even two woofers. The tweeter and the midrange are in the center of the front, one inside the other, the midrange looks like a ring (5.5 cm) around an inch of tweeter.

To the left and right of the speaker we have two inverted sphere parts (cones) made of 8 cm diameter aluminum that are responsible for the bass. These sides move opposite each other, like an accordion. They develop high speeds, without getting out of control, like pistons and produce the bass, while they have “power” well over one ton.

The path of the cones increases as the volume increases so that the eye sees a pulsating object to produce sound. The amplifier used by Phantom Gold is the size of a small chip and contains all the technology in which Devialet owes its existence, which combines class A with that of D which here is called ADH, on the same chip there is also the DAC.

Of course, because this speaker is a complete system, Devialet has adjusted it according to its SAM technology so that it is close to the absolute. Besides, he mentions it in big letters: zero distortion and zero noise.

Its response is also impressive, it goes down to 14Hz and goes up to 27KHz. To achieve this response a compatible speaker must have a huge volume, i.e. a large cabin. In other words, the Phantom Gold is a high performance wireless speaker.

The sound is completely balanced with details, without drops in the low and medium, having the bass almost unformed, almost unchanged that if we force it becomes “dangerous” with the energy that radiates around it.

Although it plays loudly, it does not distort and thus does not bother. And it bothers you that it does not bother you because you have nowhere to blame him, from where to find his weaknesses. But be careful not to dare to raise the level. You must first get the permission of the police and then your neighbors.

The speaker plays very loud, terribly loud. It can break out of absolute silence… and then the one who will leave the room will be you. Happy the app has provided to easily reduce the volume. The speaker is for all-night listening but also for parties with many dB.

Such a speaker, with such innovative technologies, you love it or hate it to death. It is much more than an object of desire, a truly audiophile system that now in its golden version will be appreciated even more.

It is the only high-end system that you can have in winter in the apartment and in summer in the cottage, it is easily transported and works with the first. No cables, no racks and no lots of accompaniments. As for its price, 2,590 euros each, it is not high. Why get an amplifier, streamer, speaker and design.

In essence, you are saving, since you have a top stereo without taking up space and without losing anything from the musical enjoyment. It is as easy to use and listen to as the touch of the home button on our mobile phone.

It is not a speaker, it is a sculpture, a sound-bomb. It will highlight our space with its sound and form. Enjoyment is a given, but listen responsibly…